A new kind of Forza

I’ve been trying to peg Forza Horizon since its announcement earlier this year, but Turn 10 and Playground Games never gave it to us straight. Is it more of a racing sim? Or a casual, arcade-style thing? Somewhere in-between?

Now that I’ve spent some quality time with the game, I can give it to you straight. Forza Horizon is an open-road (like open-world for cars) racing playground. It takes the Forza Motorsport engine and physics and plugs it into something more casual, and way less serious. Imagine a Forza game with a story and dialogue and a dubstep radio station. Weird, right?

But it works. As a guy who prefers his racing games to be of the simulation variety, this game took a bit of getting used to. But now, I can’t put it down. 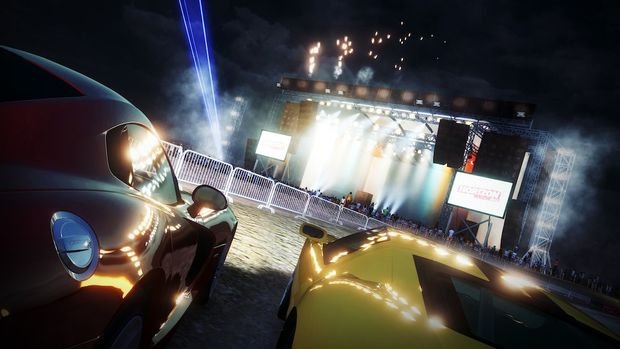 Set under the clear, open skies of Colorado, Forza Horizon has you playing as an up-and-comer attending the Horizon racing festival. The game is structured to work as an open-world racing sandbox, but it opens with a sort of storyline, complete with characters, dialogue, introductions, and other things you’d never expect to see in a Forza game.

This festival is a celebration of car culture and and all that comes with it, including music, modification, and street racing. Imagine an oasis of thumping beats, colored tents and lights, partying attendees, and at night, fireworks. It’s very festive, and serves to bring some excitement to the world of Forza Motorsport, which has always felt a bit sterile to me.

The heart of the festival serves as the game’s main hub, where you’ll go to get race assignments, peruse your garage, buy and upgrade cars, and enter car clubs. From there you’ll drive around in this open world to race locations, where you’ll meet up with others for official events. Winning brings about money, experience, new cars, and respect. You’ll use these to rank higher, earning wristbands that get you into even bigger races, eventually working up to taking on the best of the best at Horizon. 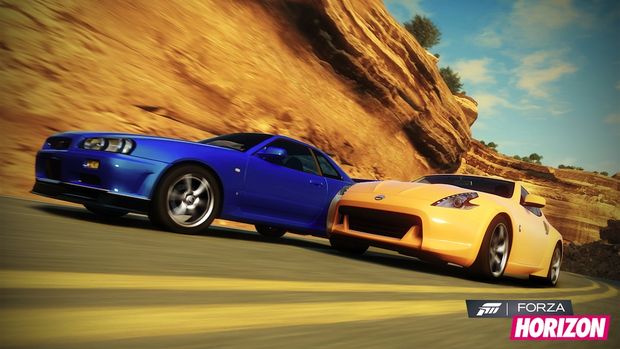 The very first race puts you up against others on the open road to get the last open-entry tickets to the festival. Once you’re officially entered, you’re mostly on your own, free to race and explore as you wish. A world map lets you select desired race locations to call forth a waypoint, but you’ll have to get in your car and drive the full distance, traffic and all. A GPS and guidelines will guide you to the location, and you’ll need these, as the world is quite large.

This is a big change from those that expect to select a race from a menu and magically be teleported to its location. As an impatient gamer that just wants to get into the next race, I found this frustrating at first. But that was before I learned to love the open road.

Half the charm of Forza Horizon is the open road, though it took me getting over thinking of the point-to-point travel time as a burden to appreciate this. The game is structured so that everything you do in this car lover’s sandbox is eventually rewarded. You start out at the very bottom of the festival’s ranking, in 250th place. But by doing things like speeding, drifting, blowing through speed traps, or catching air, you’ll earn experience that gradually takes you up through the ranks.

And really, just about anything is fair game. Things like taking on other racers in time attacks are a given, but the smaller stuff is what really makes it fun. See a road sign you’d like to plow through? Destroy it and earn points. I love seeing how close I can come to a car without clipping it while passing. This also earns you points. It didn’t take long before I was so wrapped up in the playground-ness of it all that I was forgetting about the official race events. 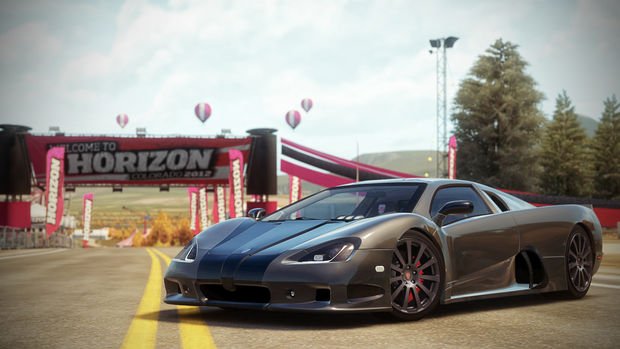 The world that Playground Games created for Forza Horizon is so vast and varied that I know I’m spoiled now, and going back to a city-only or racetrack-only racer is going to be a downer. Everything from open freeways to tight city streets can be found among the countless miles of drivable road. Places like ranches and old mining towns are set under scenic mountains and shimmering waterfalls. If real Colorado looks anything like this, I’ll have to visit someday.

Forza Horizon is packed with all kinds of race events to keep you entertained. The Festival Events are free to pick from, with the only requirements being that you have the proper wristband and vehicle type. You can attack them in any order and even skip the ones you don’t like. These are the races that will earn you the most experience points, which go directly toward earning you the next highest wristband, which then opens up more races.

After a few official races are under your belt, some extra types open up to mix things up. Street Races pop up all over the map during play. They’re a bit rougher, with looser rules, but they give you the opportunity to earn cars and cred. Expect to be rammed into walls or cut off. 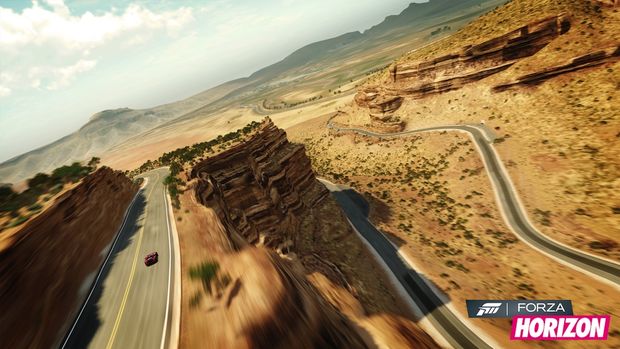 Outposts are also scattered all over the map, and it’s here that you can change out cars or upgrade them. These points can serve as teleport locations if you spend 10,000 credits to use them, but choosing to participate in PR Stunts can earn you discounts on that price. These stunts have you doing things like speeding, pulling off skills, or even snapping photos. The Stunts are fun, and I get that Playground Games wants players to enjoy the open world that they’ve created, but I don’t think that players should have to pay out of their hard-earned credits to teleport. Is the cost supposed to be a lesson in patience or something?

Just about everything you do in Forza Horizon is compared to the existing standings of others in Rivals Mode. After most races, you’ll be prompted with the option to go up against the time of someone else (friends, rivals) in the Forza universe, and your results will then be added to the leaderboards. There’s always someone faster, so you’ll never be without the option to jump into a rivals race. I enjoyed always seeing my standing against others in the world as I raced around Colorado. This served as a constant, gentle push to be a better racer. 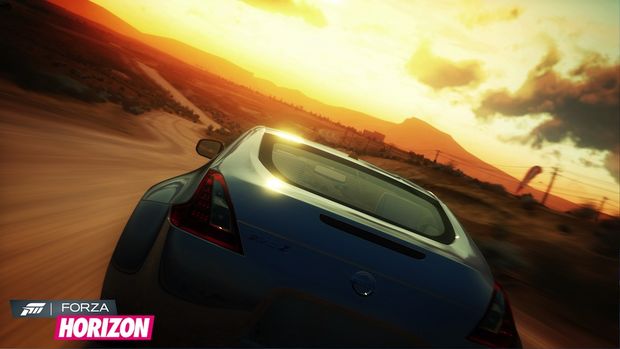 I started out as a pretty good racer, though. This was mostly due to the fact that Forza Horizon‘s racing feels a lot like the Forza Motorsport games. The cars feel like Forza cars. To me this is pretty much the same approachable, great-feeling engine that powers the Motorsport games. You couldn’t really call Horizon an arcade racer as you won’t get far by keeping that gas pedal mushed the whole time. You have to use the brakes, and you have to at least try to negotiate corners with some sense. There might be some forgiveness padded in some places like off-road sections and corners, and there’s always the many assists to switch on or off, but I approach this game’s control exactly like I would playing Forza Motorsport 4, and I wouldn’t have it any other way.

All of that said, I would hate for a potential player to write off Horizon‘s control as that of a racing sim’s. The open-world setting and the nature of the road types makes this game much more forgiving than any sim. Whizzing down wide highways and speeding for long stretches feels quite a bit different than the calculated turns required on the race courses. Besides, catching air, sideswiping and plowing into stop signs is quite the opposite of simulation racing. The key takeaway here is that Horizon‘s racing never stops being approachable or fun.

And there’s rarely a moment where it doesn’t look amazing. Forza games have always looked great as far as car models were concerned, with the previous entry, Forza 4, sporting impossibly detailed interiors and exteriors. But Horizon ups the ante even further with its settings and lighting engine. I was blown away the first time I witnessed the game’s transition from day to night, watching as the sun-drenched ground gave way to moonlight. Headlights took over for a bit as I overtook some country hills, but the wow moment came when I rounded the last corner toward the festival, where I saw fireworks lighting up the sky. No racing game has ever looked this nice. 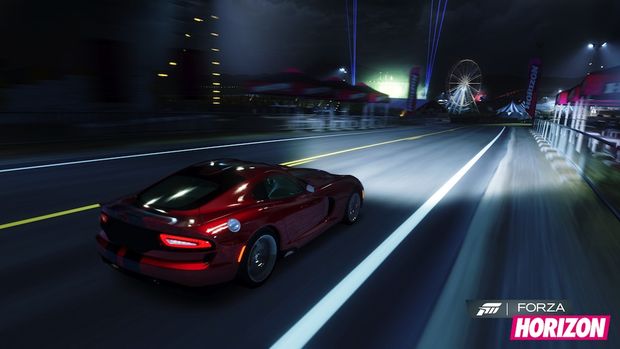 For as much as there is to do in single-player mode, I think most players will be drawn to multiplayer side of the game, as it makes full use of Horizon‘s open world. There are several different race types to set up for eight-player online matches, most of which put you at one of the courses from the single player mode, with your garage cars available.

I liked the free-roaming match mode more than any other standard racing mode. Here, all players have the entire game map available to drive around in, doing whatever they wish. Explore together, set up point-to-point races, play bumper cars — whatever you’d like. In a couple of test sessions, I worked with seven others to try to acquire 1,000,000 credits in a challenge that required that all eight of us blast through a speed trap together with a top speed above 190 mph. We could never pull it off, but we had fun trying.

The Playground multiplayer games are also a blast. This set throws traditional racing rules out the window for pure craziness. Imagine darting around a golf course in a Lamborghini as the ‘King,’ racing to not be rammed by any of the seven other players out to get you. When they finally do hit you, they become king, and the focus turns on them as the new target. Another mode, Infected, has one car tagged as a carrier, and every car they hit also becomes infected. The goal is to drive as fast as you can to stay a survivor for as long as you can. Finally, Cat & Mouse has two teams of four working to complete a race. Each team has one slow car (the mouse) and three fast ones (cats) that are out to hinder the other team’s mouse in any way possible. 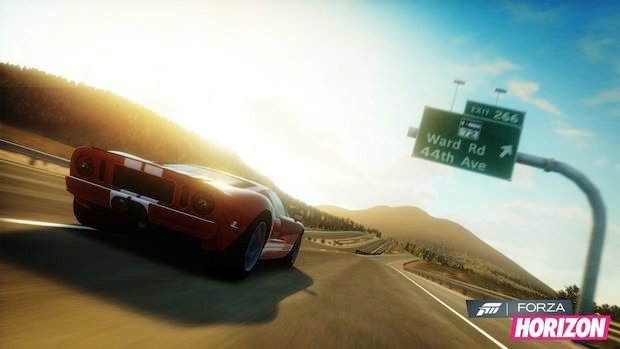 It’s almost always racing bliss with Forza Horizon, but were a few bumps in the road. First, the loading times, while not the worst we’ve seen, still often felt annoyingly long. I’m sure if I tallied how long I spent looking at loading screens while playing this game, I’d have a depressing total time logged. And while the presentation and voice acting of the game’s story bits are top notch, there’s probably too many of these instances for a racing game. Between the cutscenes and the pre-race taunts, Horizon comes off as a very talky game, and it wasn’t too long before I became tired of the constant taunts and interjections. These are both things that got in the way of what this game is supposed to be about — racing.

Forza Horizon mixes authentic racing with an open world to create a unique game that will appeal to both hardcore car freaks and casual racers. Playground Games took a humungous, beautiful world, packed it full of entertaining challenges and events, added in tons of personality and style, and built it all around the proven Forza tech,  giving racing game fans an exceptional automotive experience that they didn’t even know they wanted. For as much as I love Forza Motorsport, it’s going to be hard to go back after this.