There are few things quite as cathartic as punching a nigh-endless horde of villains in their ugly mugs. I’m all for highfalutin, emotionally charged, wordy games where you are meant to care about people, but sometimes I just need to hit nasty people really hard in quick succession.

Fist Puncher dutifully scratches that itch, providing many hours of of retro, River City Ransom-inspired cartoon violence. The 8-bit aesthetic, somewhat juvenile premise, and the simple mechanics are all throwbacks to the age of the side-scrolling brawler — it’s a nostalgic homage, and Team2Bit certainly hasn’t made any bones about this.

Nostalgia alone does not a good game make, however, but Fist Puncher also oozes character, with its absurd humor and ridiculous villains. There’s a lot of charm amid the flailing of limbs and slaying of bullies, so it’s unfortunate that a lot of enjoyment I stole from the experience was marred by egregious flaws. It’s a game I desperately want to love, but often I found myself mildly frustrated. 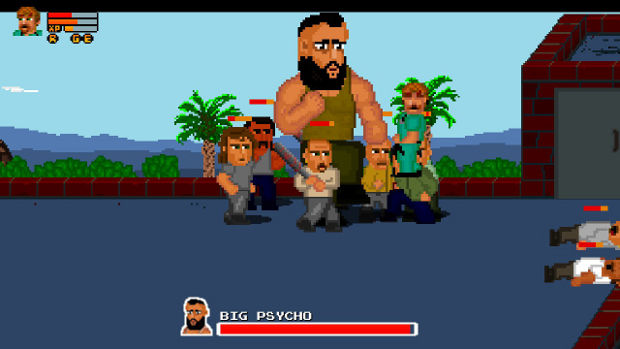 You’re just hanging in your dojo, minding your own business, when a group of Miss Universe contestants are kidnapped by the local crimeboss — the Milkman. What does this have to do with you? Well, your sensei was one of the contest judges, so he wants you to rescue the lovely lassies.

Lampooning the damsel-in-distress scenario from River City Ransom and Double Dragon, just to name a few, Fist Puncher gets off to a very traditional start, yet it deftly avoids being trite thanks to the irreverent lady-loving sensei and the colorful gallery of heroes. Four characters are available for this rescue attempt, initially, including a sexy beekeeper and a karate-loving doctor named Dr. Karate, with the roster eventually growing to 15. This is not your average dojo.

Character selected, and it’s off to save the ladies by traversing a city map, covered in nodes representing a large array of missions. Most missions involve sauntering across the screen, punching, kicking, grabbing, and throwing very rude people until they are dead. It doesn’t get more simple than that. Thanks to an RPG-lite leveling system, the combat does become considerably more involved, however. 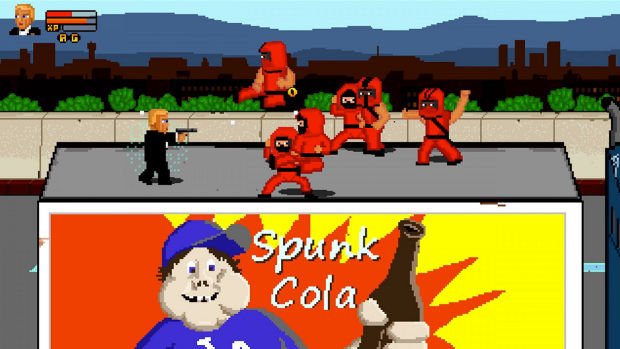 Characters come with their own signature moves, like Dr. Karate’s flying kick, and develop even more special abilities, perks, and increases in their strength, speed, special meter, and all sorts of other RPG-esque junk. Experience comes hard and fast, thanks to the vast army of enemies that charge at you with little regard for their safety. They hate you a lot, and they also desperately want to die.

The plethora of thugs that attempt to halt the heroes’ progress are as varied as they are bizarre. Evil nudists, strippers of the male and female variety, racists, werewolves, zombies, genetically enhanced shark-alligator-human hybrids — they are a strange bunch. Most groups have unique attacks, as well. There are convicts who can shank you, grabbing you by the throat and stabbing you repeatedly; thugs who throw molotov cocktails at you, covering the ground in flames; ninjas that toss slow-moving shurikens; and soldiers that employ assault rifles, spraying bullets all over the screen.

Even with the special abilities and the range of enemies, Fist Puncher does devolve into stringing together simple punches and kicks over and over again. It’s arguably also an issue with the games it’s trying to ape, and at least Team2Bit has attempted to spice things up with perks and strange powers — like a kiss attack that turns an enemy into an ally, or an attack that launches bees at an unsuspecting foe. 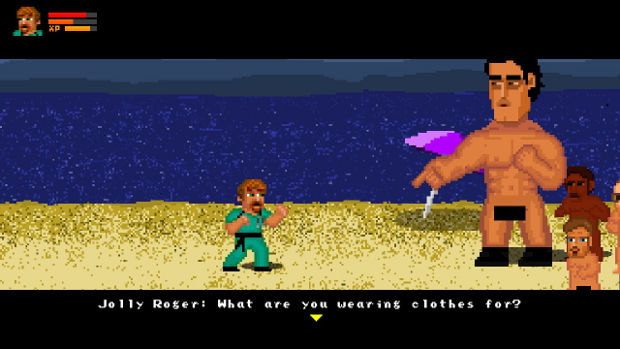 In an attempt to break up the repetitiveness, special missions crop up from time to time, demanding that the heroes do more than simply kill bad guys along a corridor. Unfortunately, these missions are rather poor, their weaknesses merely disguised by the zaniness of the scenario.

In one mission, I found myself on a train that had been hijacked by convicts, and for some inexplicable reason, the train was full of lawyers. I had to defeat all of the enemies, but the moment I struck a lawyer, the mission would be failed because the dojo couldn’t afford the lawsuit. My initial laughter turned to shouts of frustration, as the lawyers would basically walk right into my attacks. At times they’d literally swarm me, ensuring that any punch I launched would result in me restarting the section.

Likewise, absurd boss battles are also very poorly thought out, hiding irritating mechanics behind a veneer of silliness. Most bosses are larger-than-life villains, literally towering above the heroes, and they are admittedly rather funny. Defeating them is less amusing however. They spam extra powerful attacks, take many hits, and dish out a lot of punishment — yet beating them amounts to the same strategy every single bloody time: run in and punch them a couple of times, and then roll away (dodging makes you essentially invisible). Rinse and repeat. 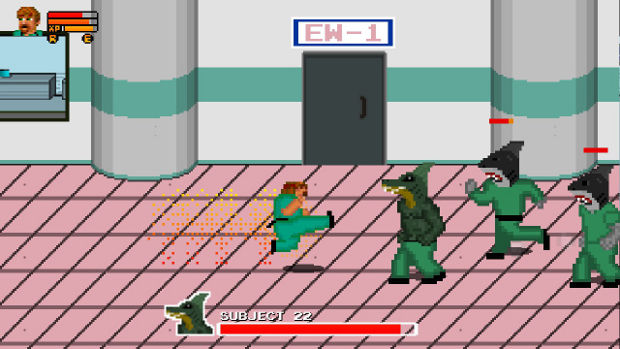 From running through a minefield on the back of an ostrich, to protecting a “spunk soda” delivery truck from ninjas, Fist Puncher has been designed to make you laugh hard enough so that you’ll ignore the shortcomings. It works, too. The setting and the gags provide plenty of entertainment, and whenever I became frustrated, it would only take minutes for me to start laughing again.

Less forgiveable is the ridiculous lack of online co-op. Local co-op is available, but on a PC-only title, this seems a bit pointless. Fist Puncher is a co-op game, the start menu for each mission shows four character slots, the enemies make references to there being more than one hero, and it’s inspired by classic co-op romps, so it beggars belief that I was unable to play with anyone online. 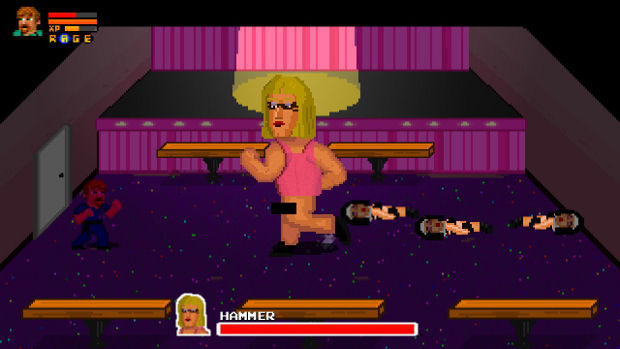 When I play titles with older aesthetic sensibilities like Fist Puncher, I always have to ask myself, what does it add? In the case of Fist Puncher, I’ve lamentably come to the conclusion that it adds nothing whatsoever, beyond making it clear that the game is inspired by NES-era brawlers. There’s no artistry behind the pixels, and while the backgrounds can occasionally inspire a chuckle, they are really rather ugly. The game definitely isn’t nostalgia just for the sake of nostalgia — there’re too many additional features to claim that — but the art certainly is.

Despite the art, Fist Puncher manages to be an homage that isn’t simply cashing in on nostalgia, capturing a lot of the simple joy of beating up hordes of merciless villains that kept people pouring into arcades or hooked to their NES in the ’80s and ’90s even though the experience has lost some of its luster over the decades. It’s hard to overlook the shoddy boss battles and the lack of online co-op, but if you’ve got a PC set up that allows for couch co-op, you could do a lot worse than taking Fist Puncher for a spin.