A watched fire never kills you

The drunk, nude teens bathing in the lake at sunset summed up Firewatch neatly: “you’re just some sad man out in the woods.” Kids always know just where to cut. If you could translate the insult quadrant of their brains you’d have the most precise web algorithms in the world and only ever see cute animal gifs and Missy Elliot songs.

Firewatch is a first-person mystery and the first release for Campo Santo. The studio brings together the writers of Telltale’s The Walking Dead (season 1), the designer of Mark of Ninja, acclaimed artist Olly Moss and, with the rest of the crew, proves to be a formidable team for tackling a character-driven piece of intrigue and blistering Crush-colored skylines. 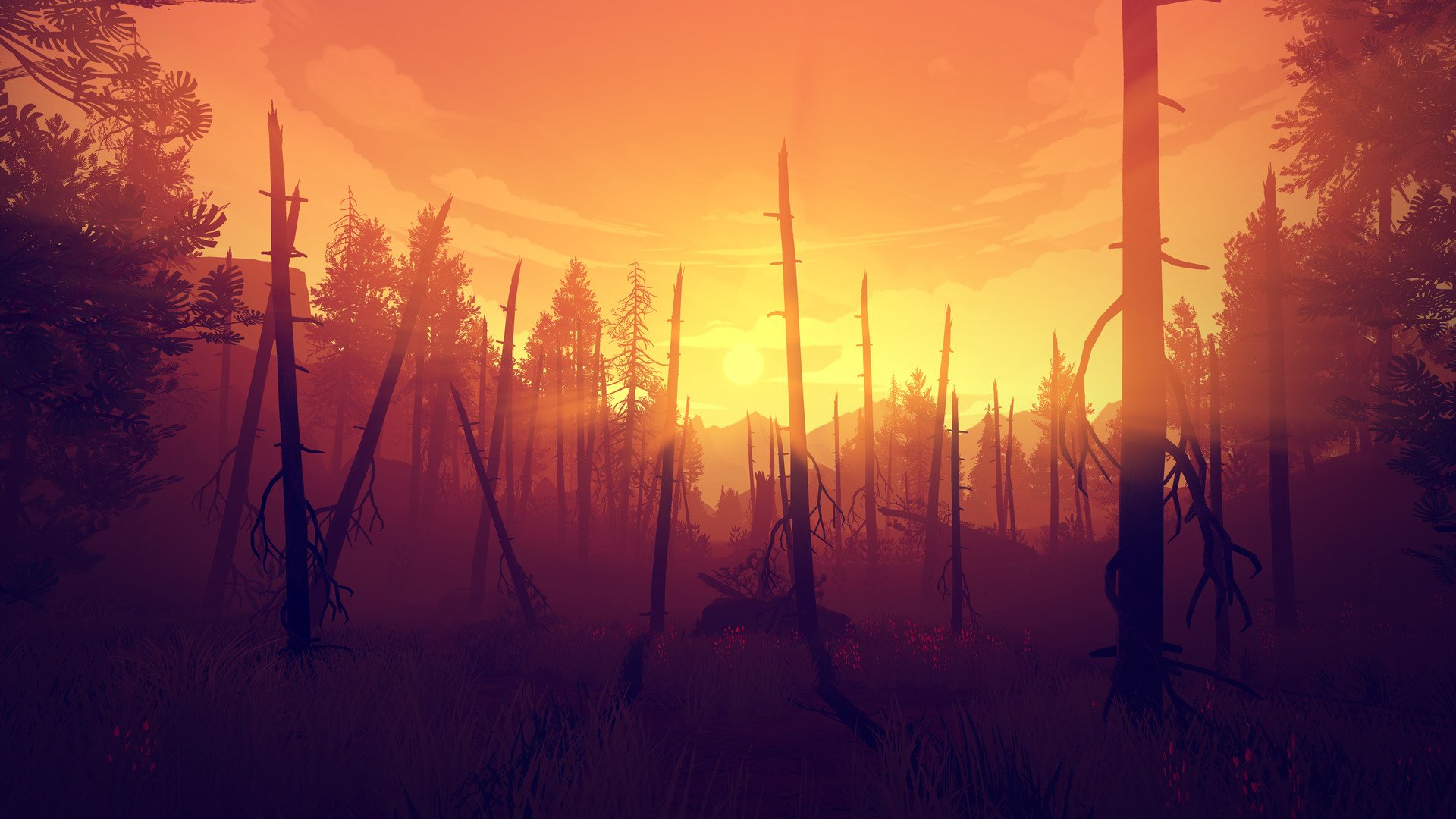 Henry is sad. Why else retreat to the woods of Wyoming to become a fire lookout? It starts in Colorado when Henry, plastered, tries to hit on a woman at a bar. She feels so bad for him she gives him a pity date that turns into a relationship. These bits are done purely with text and music, interspersed by full three dimensional segments of Henry walking out of an elevator into a parking garage and getting into his beat up, fire-engine red pickup.

Not unlike Kentucky Route Zero, a high mark in the adventure game genre, Firewatch opens with opportunities for the player to partially define Henry’s character. When your girlfriend Julia wants a dog, do you accept the beagle she falls in love with, or insist you get a German shepherd (for protection)? When she asks about children, do you ask her to wait? These choices are not superficial; they are real-life important. More than affecting the outcome of that relationship (you already know he is escaping to the Wyoming woods by the mid-80s), they take on personal meaning in how you sharpen elements of Henry’s character.

Mixing these text-adventure-style segments with Henry’s dutiful trek into the woods makes them more poignant because you already know how it ends. Badly. Yes. But with a surprising complication. Julia, by then Henry’s wife, comes down with early onset Alzheimer’s. I didn’t expect to be hit that hard by two white text options, but the decision to keep minding her around the house 24/7 or put her in a home was not easy — and I don’t even know what she looks like. While Julia and the relationship are defined in broad strokes, the choice doesn’t feel as abstract as choosing to save a character and let another die in The Walking Dead, for example. These are familiar, real-world issues. 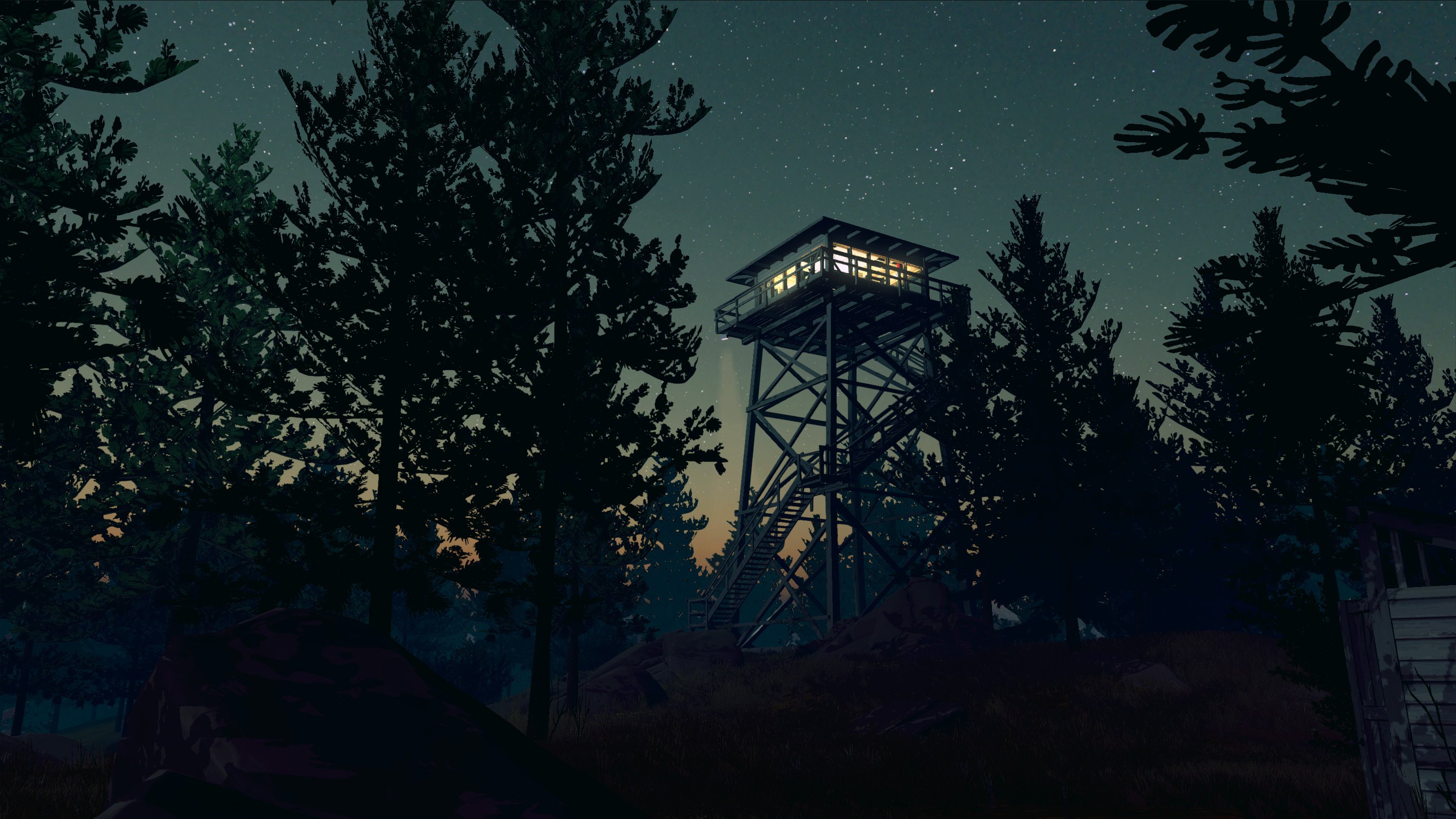 As Henry settles into his role as lookout, ascending his tower after an eight mile hike, he is met by the voice of Delilah, his boss, who communicates with him via walkie-talkie. This makes up the bulk of the gameplay: walking around, chatting with Delilah via radio. It is a welcomed evolution of the stationary choice-based dialogue trees (you use the triggers so you can walk, talk, and probably even chew gum at the same time).

Their conversations are natural thanks to strong dialogue matched by each character’s voice performance. Delilah’s constant cursing and groan-inducing puns are met by Henry stammering “p-p-p-panties” on the way to keep those aforementioned nude teens from setting off any more fireworks in light of the extreme fire warning. The chemistry is natural as they alternate jabbing back and forth and opening up with one another, though still I found it difficult to bring up my abandoned wife the first few times opportunity arose. Silence is a viable dialogue option.

Henry, though, is not just defined through player-guided dialogue. Everything about the production furthers his character. He is not a camera on wheels. You see shorts-clad legs when you look down or his large, meaty hands as he exerts himself clambering up a one meter lip. He is human, average, and the animation work reinforces that. Firewatch is filthy with telling details like these. Some pieces just add flavor (in the confiscated bundle of bottle rockets, one is called the Screaming Wife, and all have original artwork), but it all works towards a cohesive tone.

Art director Olly Moss’ color palette is not just pretty to look at. The exaggerated hues work towards the overall tone, from the warm oranges to vivid, dark evenings, while the stylized look is readable, moving away from obfuscating photorealism. I rarely got lost in the unfamiliar woods (though there is a paper map Henry physically pulls up and scribbles notes on). The area is designed and the story paced with just enough backtracking to breed familiarity with the territory, while the relative isolation still leaves it frightening, especially as the story moves away from potential drama-cum-romcom into a thriller.

Most impressive is the thematic cohesion. Firewatch is broadly about guilt, which metastasizes here as isolation-induced paranoia when things turn frightening. After day one on the job Henry comes back to his tower to find the place smashed into. The teens, maybe? Or that silhouette of a hiker spotted on the way back home? While Henry has Delilah on the radio, isolation is what drove him into the woods, perpetuating a cycle of guilt leading to self-imposed loneliness shared by the major characters.

The same nagging doubt, decision-questioning, and fear is externalized in the second act as outside forces appear to be stalking Henry and monitoring the conversations between him and Delilah. At which point, incidentally, their carefree, innocent flirting now seems lurid. Something to be ashamed of for the still-married Henry. Let’s not forget guilt, internalized anger that can lead to isolation. 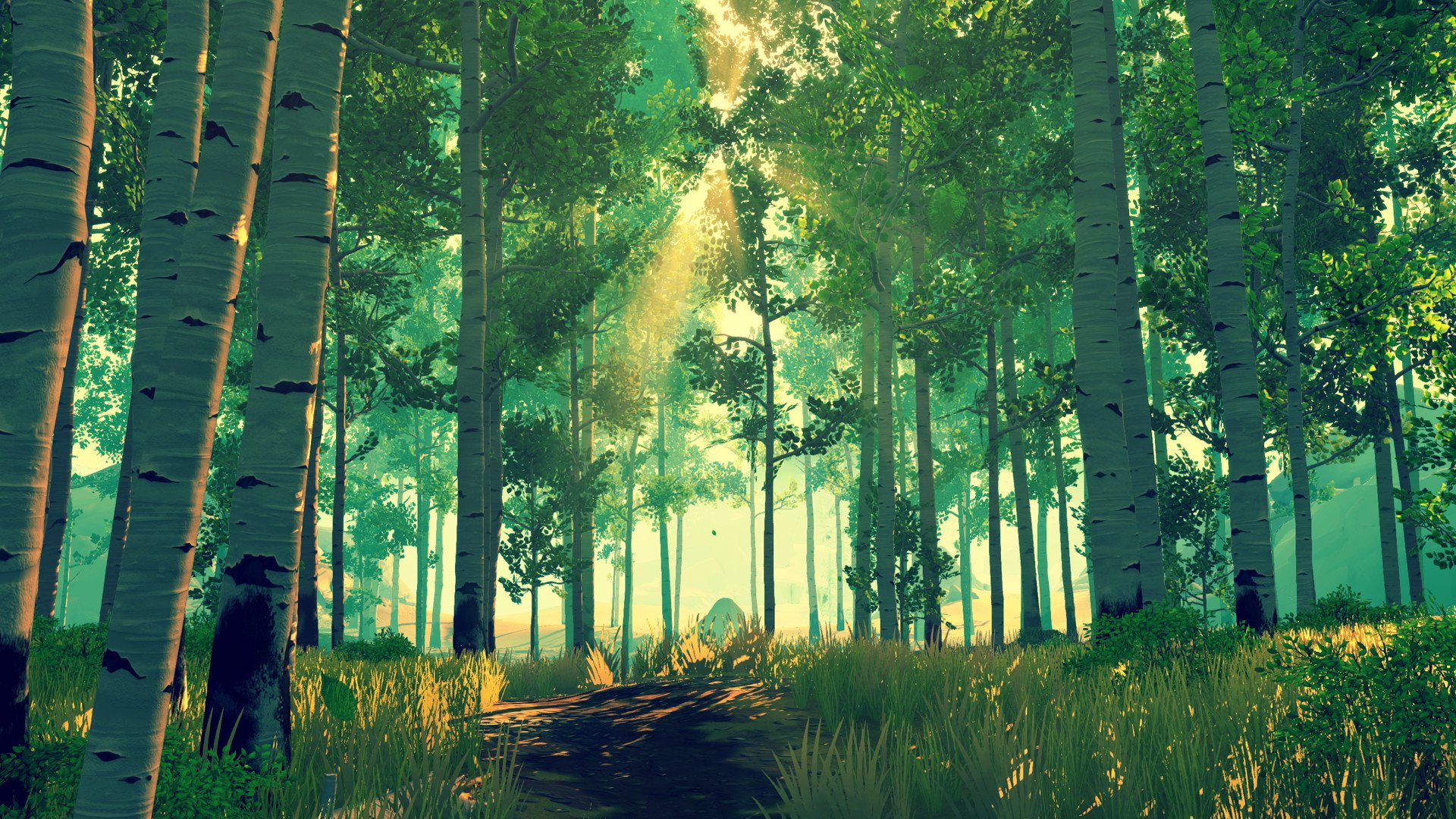 Ambient sound design shines brightest here, as everything from the weirdly strong rattle of a chain link fence to scurrying in the distance invokes fear — especially after Henry is sucker punched unconscious on the way to do some fishing.

It was here for me Firewatch accessed fear on a Hitchcockian level. No monsters. Only one encounter with some kind of assailant. Still the surveillance, the mystery, the vulnerability and the isolation left me wandering around always checking my six rather than frolicking through gorgeous woods. Music, art, and dialogue quickly established the forest familiar, giving me nostalgia flashes of camping as a kid and first stepping out of the car, dwarfed by redwoods, twigs crunching underfoot. Then that comfort is stripped away.

The analog inputs (pulling up the walkie-talkie or map, spinning the same “1234” tumblers to unlock every single park lock box with Henry’s paws) combined with unique animation and believable voice work help ground Firewatch, which manages both restraint and maturity in its story without ever going full mumblecore “walking simulator.” The warmth of the budding relationship between two voices with natural chemistry is undercut by harsher realities and the drawn out segments of feeling stalked and vulnerable are legitimately stressful. The result is a tight, taut human tale well worth the trek.