My Life as a Single-Player

Previously, on this review of Final Fantasy Crystal Chronicles Remastered Edition, my Clavat caravaner completed his fourth year of travels, meeting some new friends and enemies along the way. And while his caravan is capable of holding three other adventurers, he completed his journeys alone. But riding solo on the road can get lonely, so for the second half of his quest to rid the world of miasma, he wanted to find a friend he could travel with.

Oh, if only it were that simple. 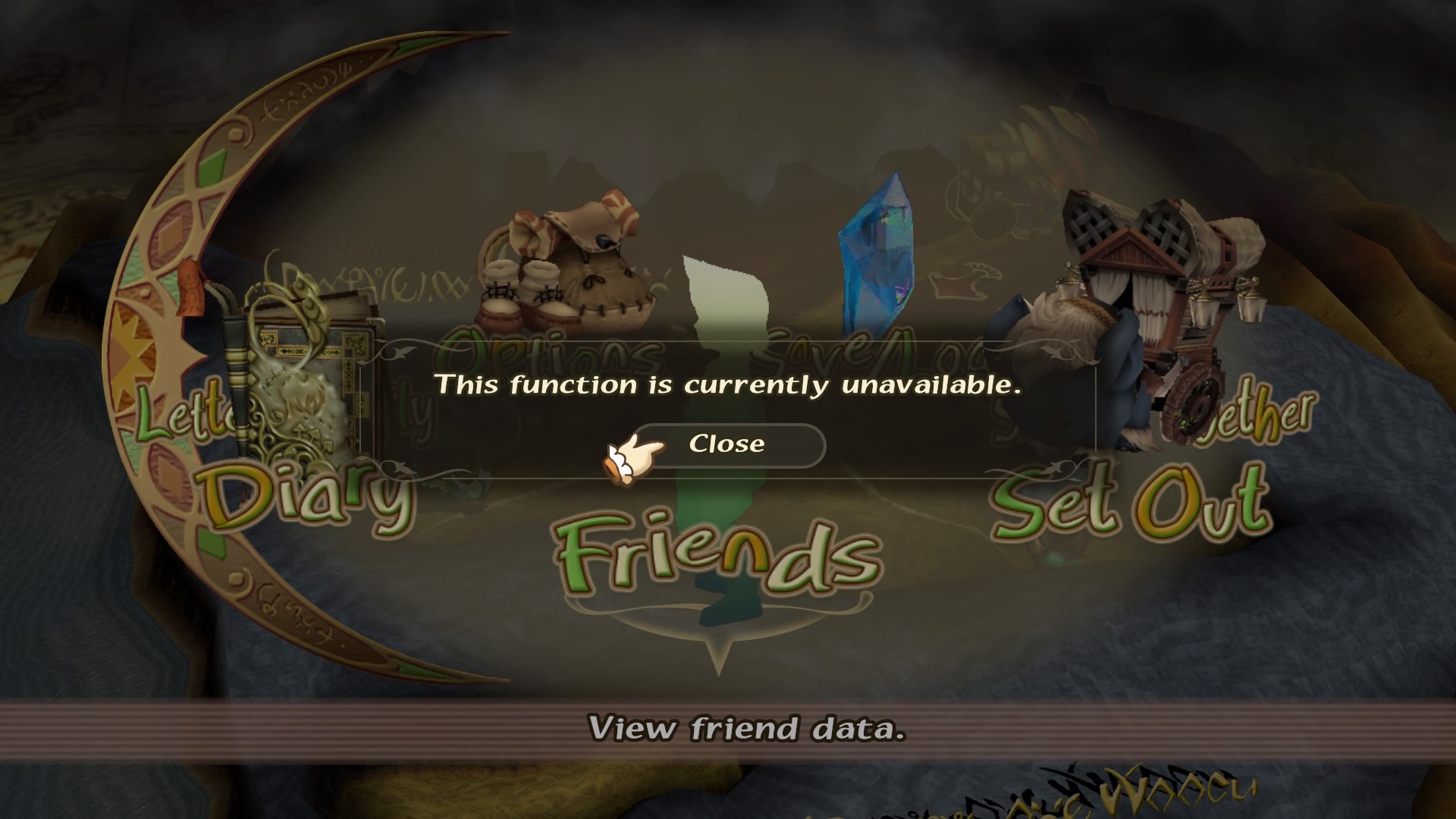 My one goal for the second half of this Crystal Chronicles Remastered review was to team up with one or more players and tackle a few of these dungeons. I’ve read in other reviews the online co-op system is less than desirable, featuring several critical issues that negatively impact the experience. I wanted to see for myself if it really was this bad or if these reviewers were making a mountain out of a molehill.

So at the first dungeon in my fifth year, I tried to team up with other players. A message popped up telling me this feature wasn’t available. This was on Friday, August 28. I logged out of the game and jumped on Fall Guys to make sure it wasn’t an issue with my internet. Having no problems connecting there, I jumped back onto Crystal Chronicles and tried to take it online again, and again the game told me the feature wasn’t available. Rather than wait until it came back on, I decided to keep going with the game and try to connect with other players before going into each dungeon.

So Friday night, I completed five dungeons without being able to connect. On Saturday, every time I tried to take my game online, I was greeted by the same message about the feature not being available. I logged on Twitter to see if it was undergoing maintenance, but there was no messaging about it. So once again, I was left to explore these dungeons solo. Finally, on Sunday, I accidentally beat the game.

Seriously, I accidentally beat the game. I didn’t even know the final dungeon was the final dungeon until some young girl started spouting some gibberish about memories like she fell out of the first draft of a Kingdom Hearts script. I had no intention of seeing those credits roll until I had a chance to try out co-op, but it just didn’t happen. For three solid days, every time I attempted to connect, I was told the feature wasn’t available. So I can’t tell you what the online is like or confirm if it’s as problematic as others say it is.

What I can tell you is, as a solo adventure, Final Fantasy Crystal Chronicles Remastered Edition is tedious. The fun I found in the first half of the game dissipated in the second half as enemies started soaking up damage when I returned to a dungeon for a third or fourth visit. Or, I’d find my way to a location I hadn’t yet raided and absolutely decimate any monsters that opposed me. I was at once too strong and too weak to find an entertaining middle-ground.

So, I beat the game by myself, never once able to connect with another player, making do with a control scheme envisioned for an entirely different input device, and I started to ask why this game was remastered rather than undergoing a full-fledged remake. Because this is a lousy choice for a remaster. Any other game in the Crystal Chronicles sub-series is a better candidate than this one as they don’t have nearly the amount of baggage the original carries with it. 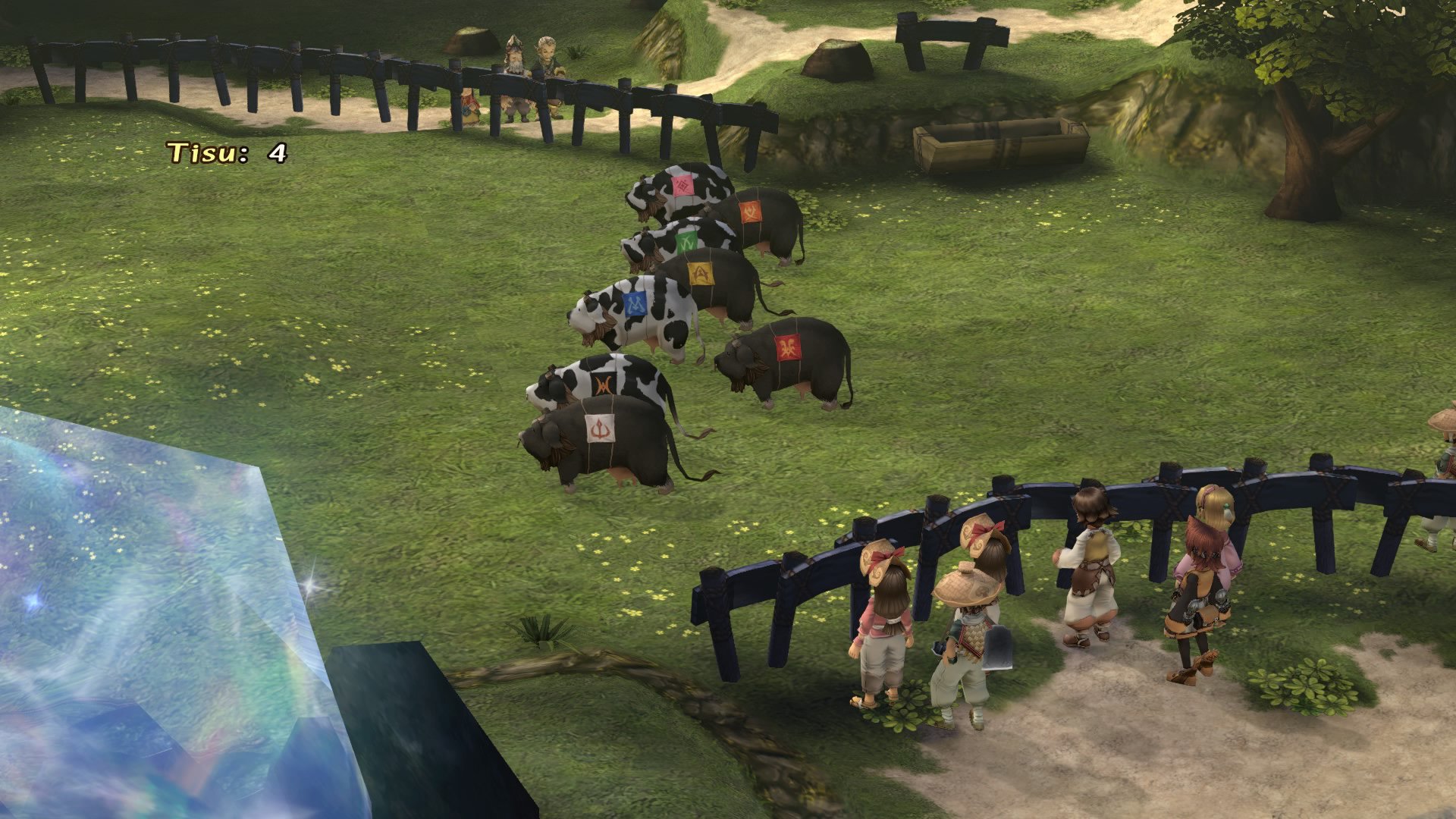 Very few titles made the most out of the GameCube-Game Boy Advance link cable back in the early aughts. Besides The Legend of Zelda: Four Swords Adventure and Pac-Man Vs., most games used the cable to unlock content, or gave access to mini-games or rudimentary two-player modes. Crystal Chronicles, in its original iteration, was designed around the link cable. It wasn’t an afterthought; it was the only thought. Square — rather, The Game Designers Studio — created a title where groups of players would travel from their hometown together as a caravan, a party system with real people. As an action RPG with a more-cumbersome-than-it-should-be menu system, having the Game Boy Advance act as your controller was vital to keep the action moving on the screen.

When you remove that unique control setup, you’re left with a game that really doesn’t work without some massive changes. Playing solo and being able to pause the action whenever you go into your bag is a fine band-aid, but it’s a non-starter for local co-op. The last thing you’d want is for everyone to stop playing while you fetch a striped apple out of your bag. The developers could have aimed for a split-screen option or reworked the controls so players wouldn’t have to worry about diving into their bags so much, or I don’t know, let us play with bots. But they didn’t. Instead, local co-op was dropped, and there are no wireless co-op or LAN options, leaving players with an online mode that, from my experience, isn’t available.

I imagine Square Enix will get the online working consistently in due time, negating a huge chunk of this review. But even if it does someday become consistently available, I worry it won’t greatly improve on the final product. Too much of Final Fantasy Crystal Chronicles Remastered Edition is tied to an experience that is no longer available. The moment in time that made the GameCube original possible has long passed, and trying to capture that nostalgia with so many missing pieces, is a fool’s errand.