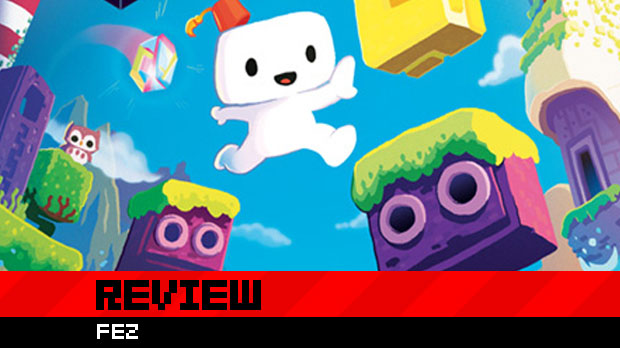 FEZ is an indie platformer with a retro look and a central premise that is as unique as it is simple. Sound familiar? Such games are a dime a dozen these days, with new ones cropping up every week, but back when FEZ was first revealed, it truly stood out from the crowd.

Polytron announced the title on July 17, 2007, and it quickly became the indie darling that everybody was excited for. The years, however, have seen Phil Fish’s puzzling platformer engulfed in a sea of like-minded games, and what once was the game in everybody’s sights now looks like just another fish in the pond.

Get it in your hands, however, and you’ll find that FEZ is more than capable of reclaiming the spotlight. 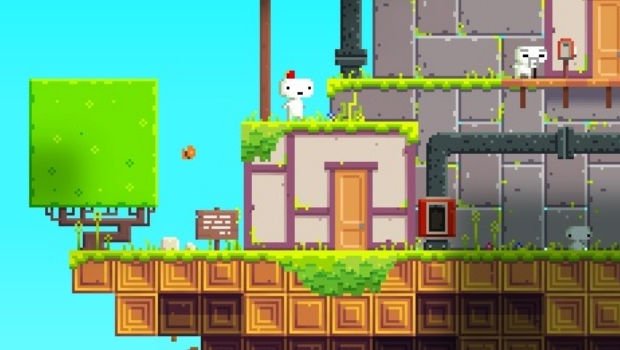 FEZ tells the tale of Gomez, an adorable, vaguely bipedal, little wad of white stuff who lives in a two dimensional world. Though the inhabitants of this world are staunchly pro-2D and hate cubes (because they don’t exist), Gomez discovers that he is unlike the others, coming into possession of a magical fez that allows him to do the impossible — turn a 2D world into one with three dimensions.

The world is split into a number of stages, connected together via a series of doors and warp gates to create a sprawling, web-like map. Stages are presented in a two-dimensional perspective, but each one is, in fact, a fully 3D environment. Thanks to Gomez’s fez, levels can be spun from left to right, revealing four sides to each level. However, Gomez himself is still a 2D sprite, and therein lies FEZ‘s clever trickery.

Once a level has been spun, every surface on the screen “flattens” to form a two-dimensional image. Gomez himself is still a simple sprite, and can only interact with the world as a traditional platforming protagonist. In order to get him through the world, players need to constantly spin the scenery to change its shape and open up new paths.

Since everything flattens, what might be a previously impassable chasm in one perspective can become a short jump in another. To provide a simple example of what can be done, there’s a wall with two patches of vines, which Gomez can use to climb. However, the vine patches split halfway up the wall, with one patch on the left side of the wall and the other on the right, too far for Gomez to jump across. Fortunately, the higher patch begins just as the lower one ends, so if you rotate the level to a sideways view, the vines seamlessly join together. The two separate vine patches are now one large one, and Gomez can ascend.

That’s just one simple example, but the game plays with its dominant gimmick in a ton of unique and clever ways. Using perspective shifts similar to Paper Mario and marrying them to Escher-style illusions in the vein of Echochrome, FEZ will keep you thinking at all times. Many of the puzzles are actually simple, but the challenge comes from making one’s own brain work in the correct way. It can be surprisingly tricky to think in three dimensions while playing in two, and FEZ exploits that trickiness perfectly to create a game that won’t ever push you to the point of frustration, but provides just enough of a challenge to give your head a consistent workout.

As a puzzle-platformer, FEZ isn’t about simply navigating stages and conquering monsters. There aren’t any real enemies in the game, and if Gomez falls off a cliff or gets sucked into patches of “negative space,” he’ll simply respawn on the last stable platform he stood upon. Instead of survival, the goal is to collect thirty-two golden cubes, many of which are earned by collecting smaller “Bits” that will become a new cube when eight of them are gathered. In what feels like a nod to Mario, new doors open as Gomez collects more cubes, allowing players to explore more vast regions of the map. 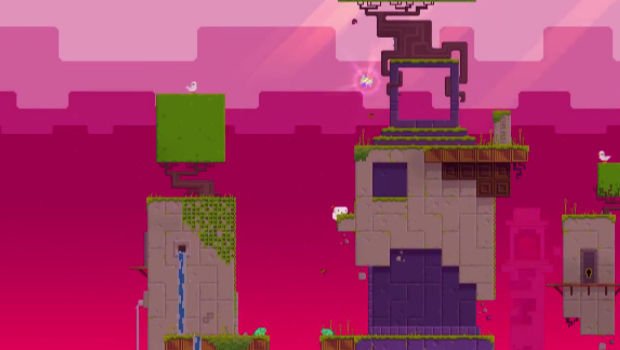 If thirty-two cubes sounds like a lot, you will be pleased to know that collecting them isn’t quite so bad as it sounds. The map screen helpfully indicates exactly what can be collected on each map, and lets you know if any bits are present. Provided you collect every bit (or even full cubes at times) on a stage before moving on, the requirement to backtrack is kept at a minimum. Of course, the world itself is quite vast, with multiple doors on stages leading to all sorts of different paths, so it’s surprisingly easy to feel lost and overwhelmed — though not necessarily in a bad way.

Collecting enough cubes to beat the game is more straightforward than it would appear, and clearing the game should take first-time players a handful of hours. However, FEZ packs plenty of extras to keep determined players invested, with a range of complex optional puzzles that will keep even the smartest people mentally taxed. Rooms indicated with a “?” symbol on the map are home to secret puzzles that will grant the player with extra rewards, most commonly a “Negative” cube. There are thirty-two negative cubes, corresponding to the thirty-two golden ones. The good news is that these count toward the thirty-two needed to complete the game, so players can beat the game faster if they pick a few of them up. The “bad” news is that FEZ throws down the gauntlet for anybody attempting to collect them all.

While some puzzles are simple, others are so vague in their presentation that I couldn’t begin to work out what was required of me. Some of them consist of empty rooms, in which I saw nothing that could be interacted with. All I know is there’s something in the room that I’m missing, and there are no visible clues. Gomez is followed by a little talking cube that sometimes provides hints, but those hints are often so ambiguous that they can serve only to lend further confusion. These puzzles, should a player be brave enough to take them on, will likely provide several more hours of hair-pulling entertainment. 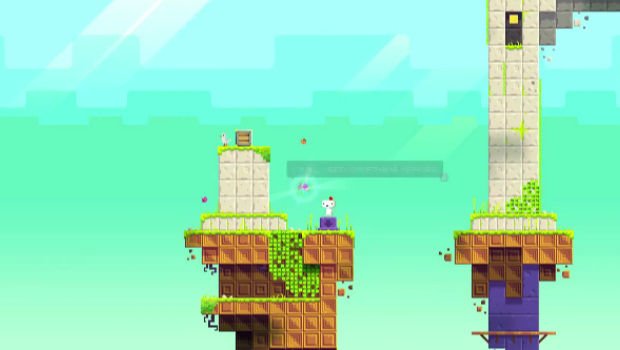 As well as negative cubes, there are also mysterious artifacts to discover (each with their own Achievement attached) and treasure chests containing keys for locked doors, or maps that provide visual clues for solving some of the puzzles. Simply beating the game is only half the adventure, with a ton of extra content and challenges on the table. If you’re a completionist, this game will have you in its grip for quite some time.

For all its puzzles and sometimes dizzying perspective shifts, the true key to FEZ‘s success lies in its simplicity. With a character that can only run, jump, climb and grab the occasional object, Polytron has nonetheless milked a ton of variety out of what initially feels like a limited concept. While one imagines you can only do so much with the dimension-bending gameplay, FEZ manages to do so much more, and in a way that never feels overly complex, despite how complicated designing those levels must have been.

My only major criticism is that Gomez feels a little unwieldy to control. His jumping, in particular, is somewhat overenthusiastic and it can be tough to predict where he’ll land. He regularly jumps a little too far off the mark, and can’t be adequately maneuvered in midair. With some personal calibration, one can mostly get used to how he handles, but in some of the trickier stages, where Gomez must land on tiny platforms or work against some sort of time limit, it can provide unnecessary aggravation. 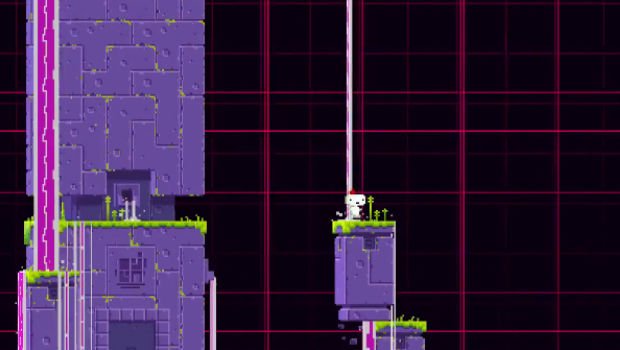 That grievance aside, FEZ is simply a joy to play. More than once, I had to smirk at just how clever the game had been with its puzzles, and when you get into a real flow, rotating the world to keep Gomez platforming along at a seamless pace, you feel justifiably terrific. It’s immensely cheering to discover a new door you hadn’t found before, and unlock a new path to a host of uncharted stages. While I’d have liked an option to instantly return to any stage automatically, there are enough warp gates and connecting “hub” areas to make navigating the world relatively painless and fun.

All this amusement is wrapped up in a beautiful presentation. Yes, the “8-bit” art style is nothing new these days, but the character design is lovely, and FEZ‘s commitment to environmental variety keeps it feeling fresh throughout the entire journey. Whether you’re entering lighthouses, exploring ancient temples, or climbing trees in thunderstorms, the world of FEZ remains consistently enthralling. Environments are brought further to life by an astonishing soundtrack, with music that powers through its limiting “retro” flavor to provide some truly inspiring tunes that build to intense crescendos. FEZ‘s music is simply sublime, and deserves to be hailed among the greats. 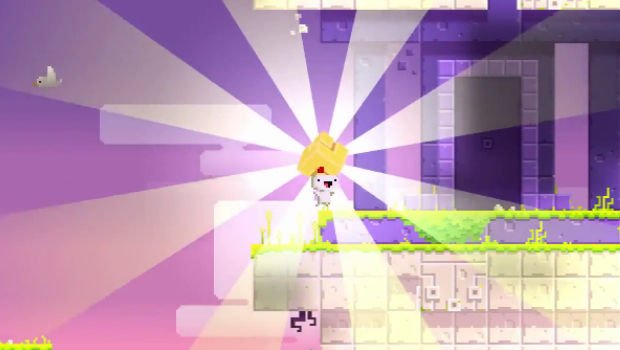 FEZ may not look quite so unique these days, but once you start playing it, you’ll notice how its quality, ingenious level design, and lovable personality keeps it in the upper echelons of indie gaming. Its minimalist approach hides just how much thought and care went into the overall package, and I cannot begin to wrap my head around how Polytron designed some of those levels. All told, this is an incredibly memorable adventure, with visuals and music that will be stuck in your head for a long time, and ideas so effective, they can draw a smile from all but the most soulless among us. Truly, a wonderful little game.