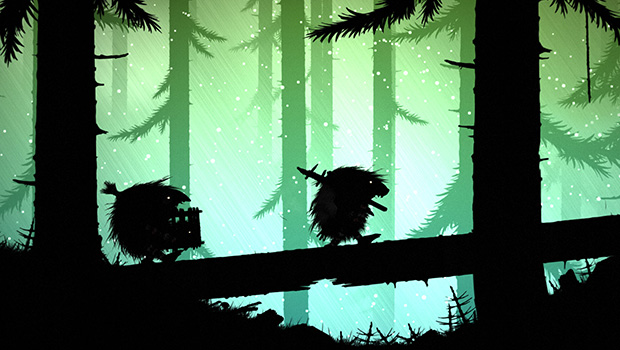 Masochism at its finest

FEIST is at first glance very reminiscent of Limbo, checking all the boxes in terms of its dark visuals, lonely atmosphere, eerie music — it even has the same creepy, hanging crates and doom spiders. Despite the similarities it’s a much more fast paced, methodical, and arduous experience where if you fail to think on your toes, you’ll meet your end quickly.

It’s a perfect example of not judging a book by its (very Limbo-esque) cover. In fact, if FEIST were a book, it would be the grimdark horror version of Where the Wild Things Are, except everything wants to eat you and there is no supper for you waiting at home.

In FEIST you control a small furry creature trying to make its way through a mysterious forest rife with larger, furrier, and angrier beasts who have a penchant for killing and/or capturing your kind. Along the forest path you encounter smaller monsters who, unsurprisingly, are also extremely hell-bent on killing you. The only protection you have is within the environment — ie grabbing a stick, pinecone, or other forest object to hurl at the creatures, or if that fails then running away. Much of the game consists of learning these monsters’ patterns and using the environment to either avoid or directly confront the problem.

Making use of the environment is also critical in progressing throughout the levels — crates, sticky pine cones, ropes, and rocks are all puzzle mechanics which allow you to move through the game, sometimes while also being ambushed. There is very little direction in how to approach each situation, so often times arriving to the solution involves lots of experimentation and do-overs. For example, leveraging a crate as a shield against a dart-throwing centipede and pushing other monsters into the fray is a common tactic to avoid death.

Nothing is randomized, even the behaviors of enemies are predictable, however FEIST manages to make each level extremely difficult by throwing a lot at the player. The encounters are sometimes clustered and can escalate quickly if not approached in the right manner. There aren’t any power ups in the game so relying on your platforming skills and muscle memory is key. In other words, FEIST is not a game where you have time to pause and think of what the solution is — it’s best to run through, burn out, and repeat what you’ve learned from your death.

I find that because of this premise, FEIST teeters on the edge of being almost too demanding. If you’re not able to master these precise movements and quick reactions, the game can become frustrating fairly quickly. The first couple of chapters through the forest were intriguing, latching onto more of a puzzle-solving nature, but sadly as I progressed I found the mechanics and monsters to be repetitive and annoying.

The visuals are simple but captivating, displaying a bright and sunny environment beyond the veil of the dark forest — a constant reminder that you’re trapped. The music is also entrancing, matching the ambience of the game and sometimes even providing a sense of calm in the chaos. I did find myself hoping for more setting to accompany the strife of actually making it through the levels — as FEIST only has a loose story that wasn’t entirely clear, or interesting for that matter.

Unfortunately, FEIST also suffers from a number of other issues. For a game that demands so much precision, so much is left out of the player’s hands. In many situations monsters have a hive mentality or tossing mechanism which essentially throws the player back and forth, making it useless to combat. It’s also impossible to tell how many hits you can reasonably take, as there is no health bar yet many ways you can get hurt to varying degrees.

It’s also unclear when, or if, the game is saving your state. When dying, it brings you back to the beginning of the scenario as expected, however when exiting the game there is no clear indication of where you will begin when re-entering. At one point, I had spent an arduous amount of time getting through a level only to find that when I picked the game back up the next day, it had erased my progress and placed me back at the beginning of the chapter.

Despite it drawing similarities from Limbo and other games in the genre, FEIST manages to separate itself and make the experience its own through dynamic gameplay and an emergent environment. However, that experience is a brutal one, and something that is extremely hard to swallow.

Although its premise was simple and delightful at first, playing through FEIST was a trying experience and one that I would not want to repeat. Others who have a penchant for unforgiving games like the Souls series may find joy here, and if you’re looking for something more thoughtful or forgiving, keep walking.