One part hack, one part slash, and one part four-player cooperative Fable with puppet heroes. Fable Heroes would be the last thing you would expect Lionhead Studios to come up with if Fable: The Journey hadn’t been announced already.

In true Lionhead fashion, Fable Heroes is a game that made me feel emotions I hadn’t felt in more than a year, but perhaps not the kind that it intended to elicit. 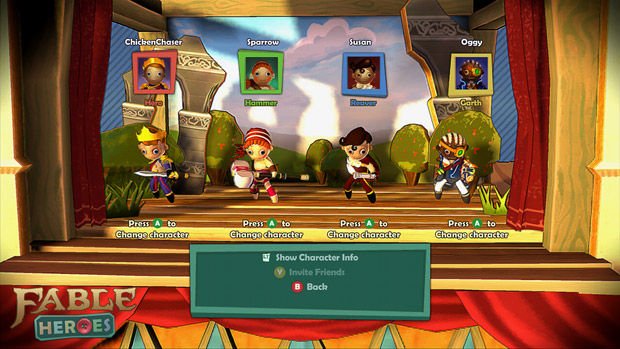 First things first: no, this is not that (non-)linear Kinect game where you shout at your horse. Fable Heroes is the result of Lionhead’s yearly “Creative Day,” during which employees can come up with creative new ideas (think Double Fine’s Amnesia Fortnight). Although the four-player, hack-and-slash genre may not be the most innovative of gaming experiences on offer, Fable Heroes does sport some creative touches where you least expect them.

Each player selects one of ten hero puppets that represent characters from the Fable series, then either goes online to fight through some of Albion’s more memorable locations together or sticks with offline solo and local co-op play. It’s your regular hack-and-slash fare, with normal and “flourish” attack moves serving as your quick and heavy attacks, while the right trigger is reserved for an area-of-effect attack that costs health every time you use it.

You shouldn’t really think too hard about why you are in control of puppets — which can look creepy or cute depending on your point of view — and neither should you think about why the menagerie of Fable enemies, such as Balverines, Hobbes, and Sand Furies, isn’t in puppet form itself. In fact, Fable Heroes doesn’t require much of your cognitive capabilities at all.

Hacking and slashing your way through the six levels in Albion is as straightforward as it can be. You follow a path, collect coins which count towards your score and which act as currency for upgrading abilities, and kill enemies until a “Go” sign says you can progress. At some point before the end of a level, a choice of two paths is offered, one of which usually leads to a boss or a button-mashing mine cart or boat ride mini-game. As easy as all of that sounds, it’s not as smooth an experience as it should be.

For starters, the controls are sluggish. Especially when playing as Garth or Jack of Blades — who float in mid-air — it’s very hard to have any sense of precision as to where you are in relation to the ground. This is slightly less of a problem with the melee characters, while ranged characters like Reaver also control a bit odd when switching from stationary ranged pistol attacks to running around to collect coins. 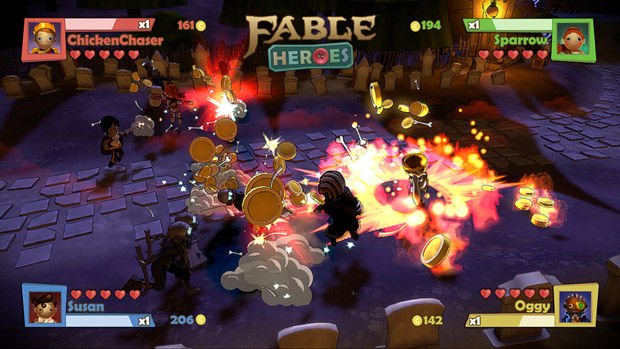 The controls are not so much a problem when it comes to dispatching enemies, as you’ll just aim in their general direction and mash the same button over and over again for what is usually the entire duration of a level. Where it does become an issue is when you try to pick up coins. As long as you don’t get hit, your multiplier bar will increase with each enemy kill, and it will only slowly decrease when you don’t kill anything for a while. The higher your multiplier, the more coins you’ll collect when running over them.

On the Normal and Challenging difficulty settings, it’s these coins that define how well you did in a level. The player who has the highest coin score at a level’s end will stand victorious on a podium, while the player who was least successful in their scramble for monetary gain is rewarded with a sad trombone. In what is a very creative visual solution to indicate how long coins remain on the playfield, large coins spin around and only flicker and disappear after falling flat on one side. However, all coins of any size and value disappear far too quickly, making it a scramble for coins to get on the victory podium for trash talking’s sake. What’s worse, the act of collecting coins is bothersome since it can be very hard to gauge where your character is on the 3D playing field, usually meaning you’ll walk right past these coins instead of picking up them up.

This results in chaos, with players often running and rolling in all directions except the piece of ground where the biggest coin is located, simply because the controls and the slightly tilted camera angle don’t allow for the kind of precision movement required to pick up every coin on the ground. During solo play, the AI puppets also seem to randomly decide to steal your coins or wait for you to pick them up. The only time this shouldn’t become an issue is on the Family difficulty, where players collect coins for a shared pool which is later distributed among each of the four puppets, but even then, it’s a hassle to do such a basic thing as collecting all coins before they disappear.

Another big problem with the use of coins as a primary competitive driver is that, any time a player dies, the hero puppet turns into a spectral form which can deal damage but can’t pick up coins until you collect a heart item which provides health. Until puppets are “leveled up” a bit, death can come easily to melee characters. This means that, as a ranged character, you can risk a tiny bit of damage then steal any heart that appears so that other (melee-oriented) players will eventually die, steal all the coins, and laugh as your co-players rage. In solo play, the AI will take care of this job for you, stealing hearts away from the player even if they desperately need them. 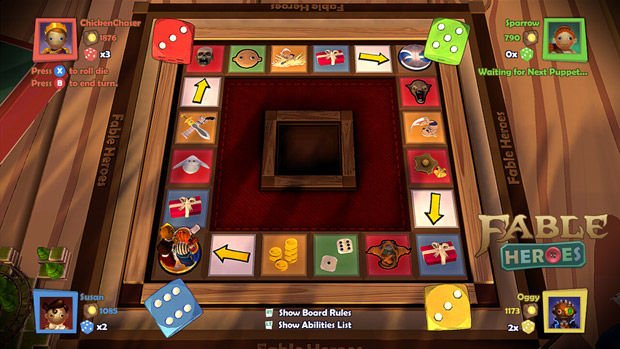 After a level, each of the four characters is awarded dice depending on how many coins they have collected. These are used in a board game of sorts, where a throw of the die moves your character to spots where you can upgrade specific abilities. Increased damage against certain types of enemies or against the highly repetitive bosses, increased speed, and new puppets to play with are among the range of upgrades you can purchase with the coins you’ve tried so hard to walk over. Over time, each puppet (even those that are AI-controlled in solo play) will become powerful enough to make an already easy game even easier.

As uninspired as Fable Heroes is when it comes to its core design, it offers a surprisingly nice touch with its credits level. Here, you can destroy the developer team’s names while some enemies wield letters as weapons. It’s a fun way to do a credits sequence, and it ends up being a full-fledged level to boot. After playing through the six levels and the bonus credit level, you are awarded access to Dark Albion, where you can play through all these levels again.

Dark Albion levels are (surprise, surprise) dark versions of Albion levels. They are slightly more challenging, but the level layouts are the same. This means that if you want to “complete” Fable Heroes, you can either choose to spend the hour or so to run through each Albion level once and leave it at that, or you can play through each level in both regular Albion and Dark Albion twice, to unlock each path for each level. Essentially, you’ll have to play every less-than-exciting level four times for completion’s sake. 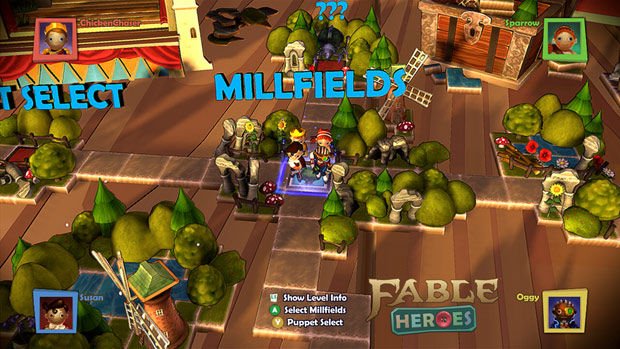 Even though the combat is a matter of mashing buttons, the controls make a chicken-kicking mini-game almost impossible to play, power-ups often work against you while they are considered to be positive by the game, and the biggest drive behind cooperative and competitive play — collecting coins — is poorly implemented due to a lack of precise control and the short lifespan of coins, none of these aspects are the title’s biggest crime. Fable Heroes is merely boring beyond belief.

No matter if you are playing in co-op or on your own, you’ll have trouble paying attention to what is going on in the game. Due to the extremely simple combat and repetitive nature of the levels, it can be played on autopilot while you read about something slightly more exciting on a second screen, such as the family history of 16th century Dutch Stadtholders. If you are playing with a child, the kid will likely prefer to talk about his or her grades rather than focus on the messy action on-screen. It is by far the most boring gaming experience I’ve had in years, and I’m hard-pressed to imagine anything more coma-inducing than playing all of the levels on offer more than once, other than perhaps watching a Steven Soderbergh film without sound or subtitles or listening to Anvilania’s national anthem for five hours straight. Having to play through each level four times just to complete the game can at best be considered a punishment.

Fable Heroes is a mediocre game at best, largely due to imprecise controls that are exacerbated by its scoring mechanics. If it was even slightly exciting to play, all of its issues could be overlooked in favor of a capability to provide simple cooperative family entertainment. Unfortunately, it is not.