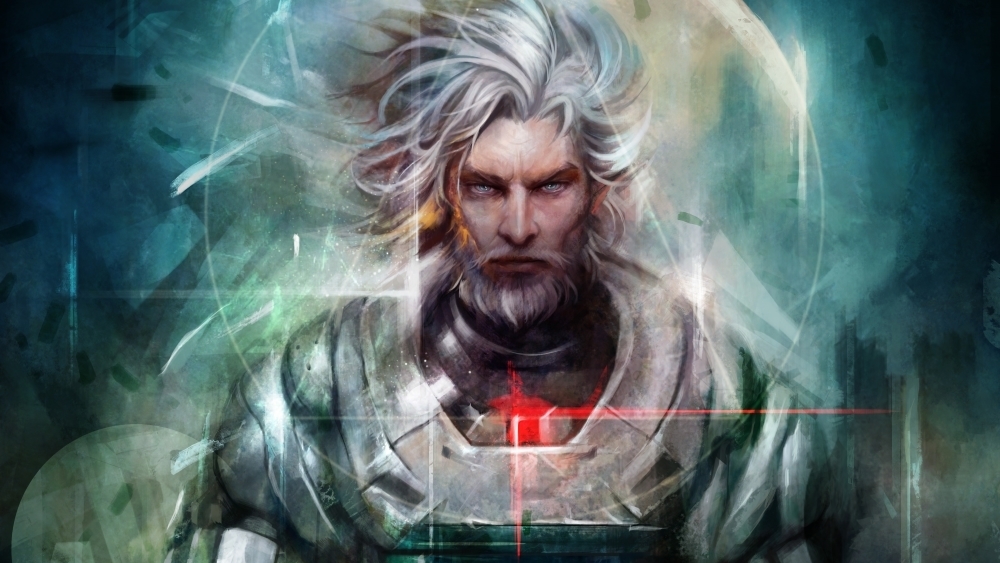 There was once a time when 2D games were the tentpole releases that companies pumped out to make the big bucks. Those days are long gone, but the sidescrollers live on and are a staple in today’s landscape thanks to indie developers. The independent scene is ripe with new and exciting concepts and ideas, and one such title produced by those ideas is Exile’s End.

Exile’s End has an interesting background as the product of a collaboration between Tokyo-based indie developer Matt Fielding with Japanese veteran Keiji Yamagishi (the composer of Ninja Gaiden on NES and Tecmo Super Bowl) and other long-time creators such as those who worked on the art and graphics on titles like Sword of Mana and Guilty Gear. This title is also a remake of Fielding’s previous game, Inescapable, with plenty of improvements and content added with some help from the Far East.

One may be curious as to how a game by a relative newcomer and Japanese industry veterans might turn out. It’s a fascinating collaboration on paper indeed. Let’s jump in, jump down, and backtrack a bit in this metroidvania-styled 2D adventure. 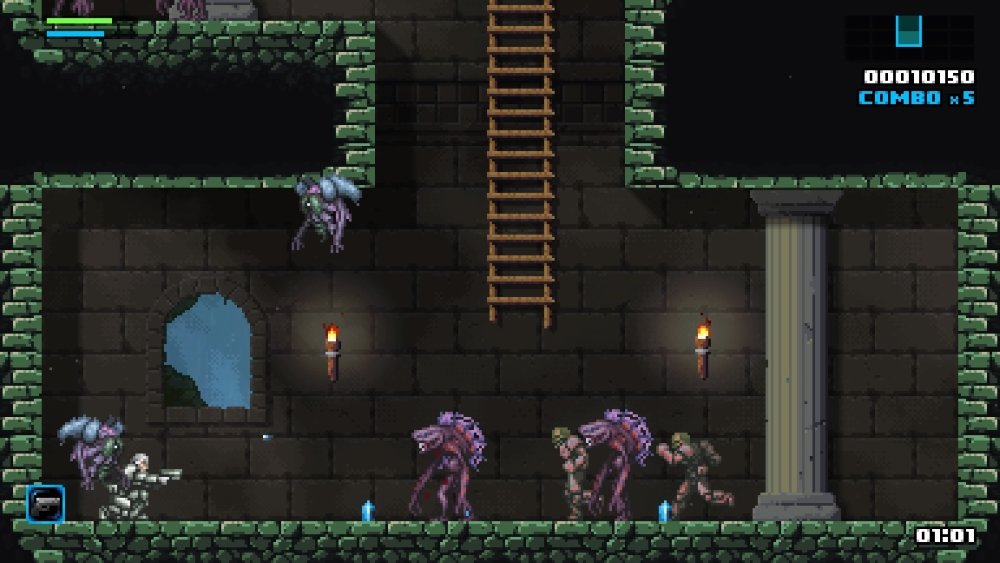 The story in Exile’s End is simple enough, with the player taking the role of Jameson, an old soldier who is part of a military unit belonging to the Ravenwood corporation (which is basically like the Weyland-Yutani Corp from the Alien franchise). Jameson takes part in a mission to locate the son of the Ravenwood corp president in a mining colony planet where all contact has been lost. As the rescue ship approaches the planet, it is shot down and crashes, leaving Jameson as the only survivor.

Anyone who takes a quick look at Exile’s End will instantly think it looks a lot like Super Metroid, but according to the creators, the real inspiration is more from the Commodore 64/Amiga plaftormers from the early ’90s. That might be more alien to people living in North America, but even with that intended style for the game, it still has a strong metroidvania approach to its exploration and combat.

There are about seven maps to explore, some of which are larger and more complex than others, and backtracking is present for progressing through previously inaccessible pathways and finding secrets using newly-unlocked abilities and equipment.

Everything starts off somewhat slow as the game introduces platforming elements and a bit of the combat. Near the beginning, there are plenty of leaps of faith, including some frustrating sections full of instant deaths from fall damage and one or two spiked-floor segments. Jumping to places above and below you can be challenging at times. The platforms are only slightly visible on-screen, leading to a lot of blind jumps. This can get really frustrating, especially when enemies are present that can knock you off or even straight into other screens.

Combat in Exile’s End isn’t bad, though shooting is limited to left or right and only certain weapons allow you to fire diagonally. This limitation can make things tedious when fighting regular enemies mixed in with these crawling worm creatures that aren’t always within range. There are various weapons to obtain over time, but not all of them are fully utilized throughout, which just leads to wasted inventory space. I stuck to using the main handgun and the grenades with the occasional SMG use, and tended not to touch the energy-based weaponry since it fired too slow and your energy capacity remains low until near the end.

Switching weapons and items with the triggers to select the inventory row can feel like a chore, particularly as you unlock more gear. This system is not optimal for a controller, and it’s frustrating in situations that require quick switching. Accidental item use can happen at times, causing you to waste important items like the medkit (which you can only carry one of). Beyond that, the weapon selection is also hampered by the cluttered inventory, and it kept me sticking with the original handgun. This all could have been avoided if the inventory was divided between items and weapons. 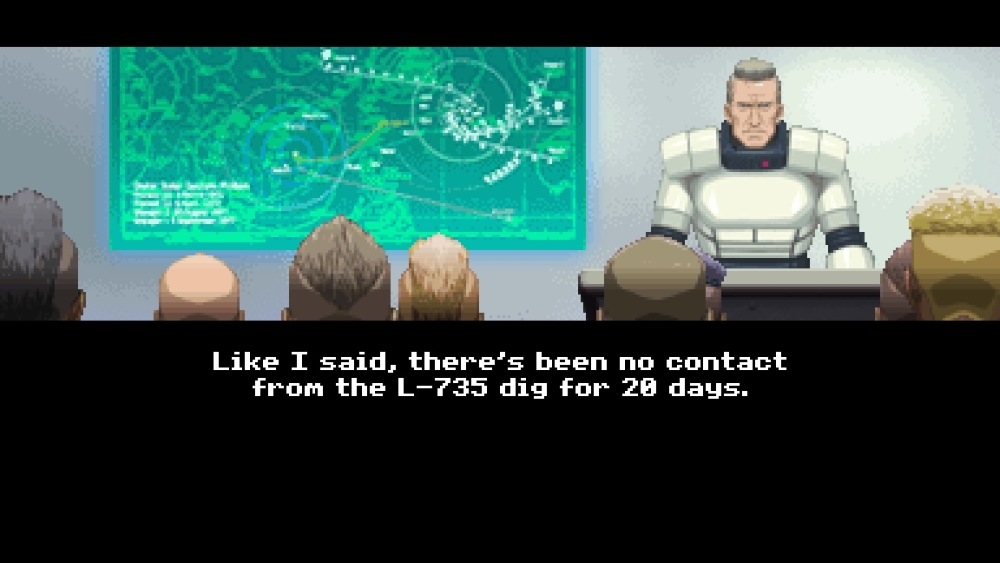 The visuals won’t impress, but Exile’s End looks good for what they’re aiming for: a tribute to the cinematic platformers of the ’90s with the likes of Out of This World/Another World. There are some nice cutscenes to deliver parts of the story. The 16-bit pixel art style is oddly inconsistent, though. The sprite character designs and environment art are a bit on the plain side, while the “cinematic” cutscenes and enemy designs are stronger. The sprite animations are also good, making it feel like a visually well-made game from the 16-bit era.

One thing not welcome from the old-school era of adventure games is the lack of hints or ways to tell you that you can interact with the environment. This can lead to wasting time when you think you missed something the first time through and you have to check every single thing. Extra backtracking time will be spent due to the lack of a fast-travel option between the big separate maps and unclear directions to the next objective. The puzzles can also be obtuse. Some of the solutions introduced concepts that weren’t intuitive and never showed up again.

As mentioned, there is a story, but it’s not fully fleshed out to the point that it would make you care much about the characters or what’s going on. We find out about main character Jameson having “a dark past he’s trying to forget,” but we never really learn anything beyond that at all. The cutscenes and text logs that add to the overall story and atmosphere are too few and far between. I was genuinely interested in learning more about the characters and setting, but I ended up disappointed. I’m not asking for a novel! I just would have liked some more character development and a bit more substance. 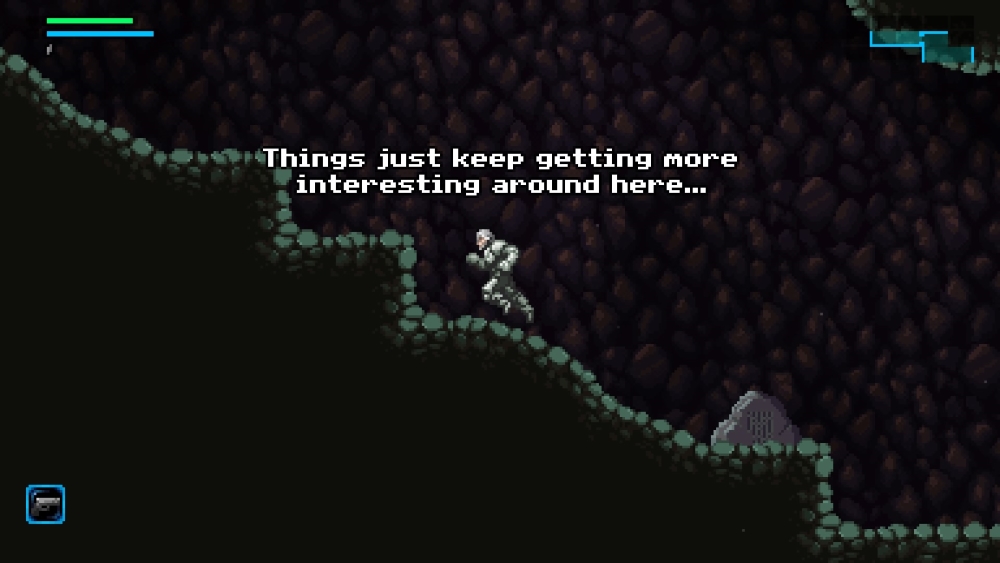 With a campaign that can be completed in around five or six hours, Exile’s End is on the lean side. Replayability lies in finding a lot of the secret sections and other completionist goals, but even those are not enough. There is a survival mode (which I wish more games in the genre had) for those who enjoy the combat, but that doesn’t yield any trophies or rewards besides an online scoreboard. There are two endings, and you can continue from the save right before the final decision, netting the other in minutes, as well as backtrack for anything you may have missed.

There are design choices in Exile’s End that may feel archaic and were possibly a way to channel those old-school games, but I can’t help feeling like those oversights could have been avoided. While a lot of these shortcomings can be attributed to how things were harder “back in the day,” it shouldn’t be an excuse and only detracts from the experience. Other indie games have also done it much better while still retaining the soul of those classic experiences.

You might be wondering about all those Japanese veterans who worked on this game. The parts I liked most were the ones made by them, which isn’t surprising at all. Their art and music was well made and definitely stood out, and I hope that this collaboration happens again with everyone on the team improving from the lessons learned from Exile’s End. 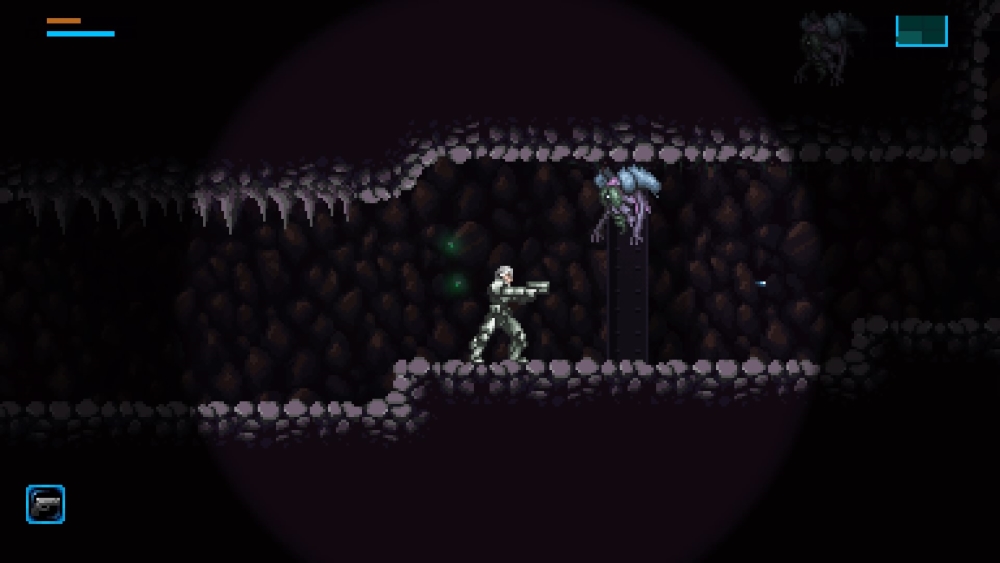 This game does show signs of promise for the future, and that with more polish and refinements to the formula, we could have a much better game to succeed Exile’s End. As is, it’s a decent-enough experience that can be really rough around the edges. Only the hardcore metroidvania fans who are starved for games in the genre will find much here.

The price is on the lower end, but may still be too much for the entire package for most players. It can be knocked out in a few sessions in a weekend, so if you are desperate for a somewhat competent metroidvania and have plenty of patience to spare, Exile’s End might have something for you.