Trying to pin down my exact thoughts on Evolve has been trickier than pinning down any kind of prey the game has thrown at me. I was cautious with my initial impressions of the game earlier this week, noting an uneven play experience that often feels like a frustrating runaround. While I’d love to say another few days of dedicated hunting and skulking was enough to iron out the kinks and worries I had, in the end this is one hunt you might want to sit out.

It’s a shame, because when Evolve is firing on all cylinders, it has been some of the best multiplayer fun I’ve had in years. But those precious few moments are far too rare — and far too laborious to set up — to give Evolve an unreserved recommendation. 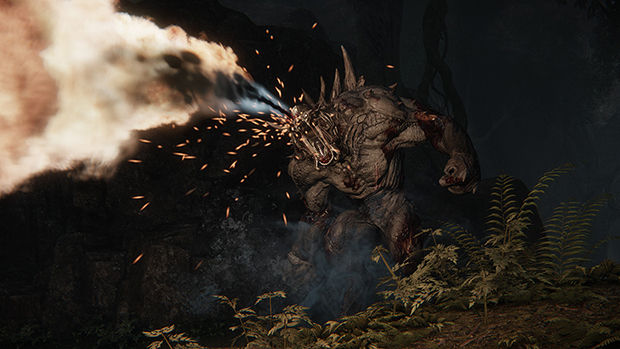 Every multiplayer game is going to be somewhat dependent on who you play it with, we all understand that. But the gulf between an enjoyable match with a decent team and an unbearable slog when even one person doesn’t hold up their end is so vast in Evolve that it’s worth underlining in thick red ink. The hunt is for pack animals, not lone wolves, and Evolve won’t truck with anybody thinking they can just go off and do their own thing for even a second.

Separating from the party is an open invitation to be snapped up by a random man-eating plant or lurking swamp monster, with no help close enough to bail you out before you’re digested. Due to the mutually essential roles each hunter plays, when any member of the team takes a dive, the situation rapidly becomes hopeless for the hunters. That may sound fun for the monster at least, but after playing several rounds where I was able to trounce hapless teams hamstrung by one particularly bad player, I have to say the thrill wears out fairly quickly.

Every player in the match (including the monster) is responsible for creating a fun and memorable hunt. That means you need five diligent players working together to carve and shape an enjoyable time out of Evolve‘s rough granite, while you only need one chucklehead to mess it up for everyone. If you’ve played any online games before, you know how the odds work out on that. 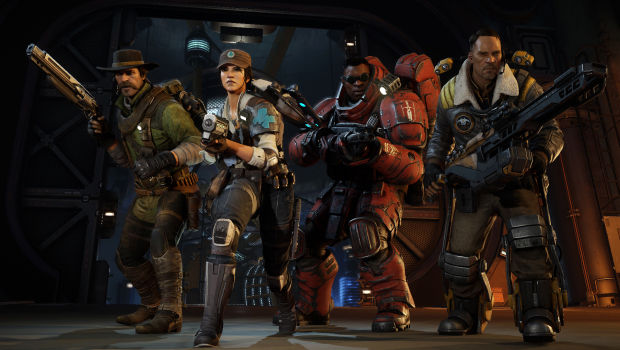 Getting on with a dependable group that’s working together and taking turns with the monster reveals just how great a game Evolve can be. It’s like taking all the best parts of your favorite multiplayer titles, dumping them all out on the floor, and collaborating with your buddies to build something new and wonderful out of them. A great match in Evolve can combine the nail-biting tension of the last round of a Gears of War horde match, the pleasing synergy of Team Fortress 2‘s overlapping class interactions, and the hangdog embarrassment of dropping a solo in Rock Band in front of everyone.

Sadly, as amazing and exhilarating as those moments are, they’ve represented the minority of my time with Evolve. It’s just unrealistic to think you will always have friends who are ready and willing to play when you are. I spent the last week buried in Evolve at hours all throughout the day and have a Steam friends list as long as my arm. Even so, I spent most of that time dropping into random matches, waiting through interminable lobbies and loading screens, hoping this time I’d luck into a good group. 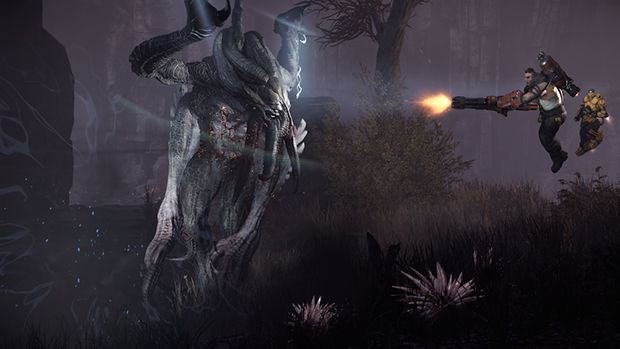 There are solo options for the antisocial among us that will pit you against computer-controlled hunters and monsters. But they’re just a pale imitation of the multiplayer matches with functionally serviceable AI teammates. More of a way to test out various classes and monsters in an embarrassment-free environment than a real alternative to multiplayer.

A co-op based take on the Evacuation game mode that squares four human hunters against an AI monster is the closest thing to a non-competitive, but still enjoyable, version of the game. Co-op Evacuation is a good way to easily grind out challenge requirements to unlock characters and have a more relaxed safari, but it wears out quickly upon repeated plays. If you’re a loner by nature but are still kind of curious about giant monsters and cool-looking harpoon guns, this is your warning — Evolve has nothing for you.

The potential for a fun time is further hampered by a number of bugs and pressing balance issues that are still a problem in the retail release. I was hoping a day-one patch would solve some of these issues, but sadly they are still fairly common.

Rubberbanding connection issues frequently wreak havoc on matches, resulting in frustrating occasions where a monster will slip out of a trapper’s mobile arena when it looks like it should have caught him, or an imperiled hunter will miraculously glitch out of the way of a monster’s would-be fatal charge. Terrain and bounding issues sometimes prevent hunters from being able to revive incapacitated teammates they are clearly standing right over, making you seem like the most incompetent jerkwad medic on the planet. 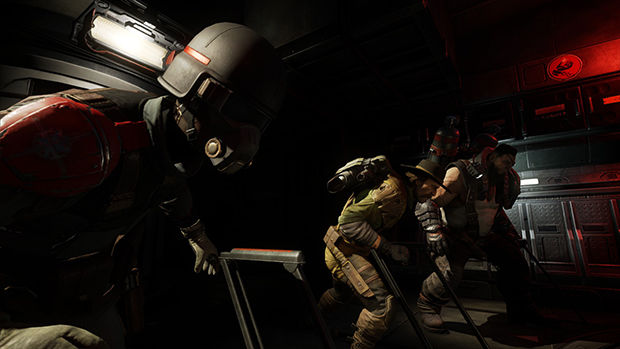 Bizarrely, more than once I was dropped into a game already in progress as a generic soldier ripped from the Rescue game mode. He carried only two weapons out of the standard three (oddly enough taken from two different members of the assault class) and has no speaking lines. While it is an interesting curiosity the first time around, the novelty wears off when you realize you just deprived a team of the medic or trapper you replaced. “Thanks for the ‘help.’”

None of these bugs are game-breakers on their own, but they add up. When you pile these frustrations on the already long wait times between matches and frequent dud games that are lopsided one way or the other, it starts to feel like Evolve doesn’t respect your time.

Speaking of dud games, I would basically classify every match I had with a Wraith monster as one. Nobody wants to be the guy who publicly complains about balance issues; it’s an open invitation to be told how bad you are at the game and how you only need to “git gud.” That said, I don’t think I ever saw a single team win against a Wraith. By Turtle Rock’s own reported telemetry, it had a 70% win rate in the beta. Even post-nerfs, its powerful combination of stealth, mobility, and devastating damage just seem completely out of whack compared to the other two monsters. Once a Wraith hits stage three, it’s basically “GG.”

I’m sure with a crack team of hunters, all playing the right character for their class, communicating and staying on point, the Wraith is beatable. But again, the average random posse is a far cry from dream-team status. Whenever one side has to play a near-perfect game to compete with another player’s choice on the character select screen, it’s hard to call that balanced or fun. 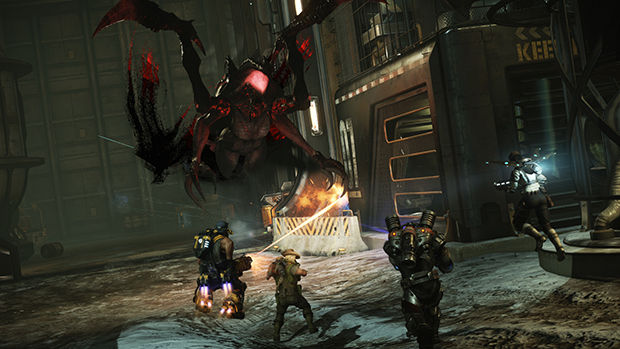 To its credit, Evolve looks absolutely gorgeous. The environments are spectacular (the first time you drop into the biodome-esque Aviary is a real treat), and the character models for both hunters and monsters are great. Each class has its own color palette and unifying size/shape while still keeping a lot of individual style between each character in the class. It makes for a design that is easy to keep track of in the middle of a fight, and fun to admire during downtime.

The characters are mostly stock types, but they play with the typical tropes in a few amusing ways to keep you guessing. The pre-mission pep talks between hunters can veer into standard tough-guy bravado, but they are often surprisingly charming as well. I particularly enjoyed a lot of the interactions with Lazarus, a medic who only applies medical care after his patients have died a violent death, and Bucket, an immortal AI contained in the body of an industrial worker-bot. Needless to say, he has somewhat unique perspective on the mission.

The monsters look magnificently intimidating, radiating predatory menace with each careful movement. They feel every bit as tremendously powerful as they should, bounding vast tracks of land in a single leap, or snagging lesser beasts with powerful tentacle arms and claws. It can be remarkably satisfying to turn the tables on a group of hunters who have harried and harassed you all match once you hit stage-three evolution. 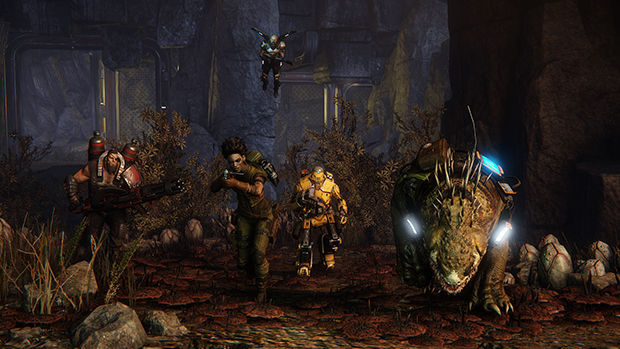 There is a lot of detail paid to the other wildlife on Shear. If you take time out of your busy schedule of shooting or devouring everything you see, you can watch random animals snap at each other, or move out of the way of a more impressive predator. The pacified industrial areas where humans have set up shop are finely crafted and help put the fearsome monsters into scale. It’s clear the developers devoted a ton of thought and care into the world they’ve built, and it’s a damn shame the game doesn’t come together as nicely as it should.

If you can find four people who are willing to sign a blood pact to convene for a ritual night of Evolve once or twice a week, then by all means enjoy the hunt (and where do I sign?). If not, you have to ask yourself if you are really prepared to deal with the peaks and frequent valleys of the experience. Personally, I think there are better ways to spend your time than gambling on a decent match, hoping one or two of your friends can make it on sometime over the weekend.