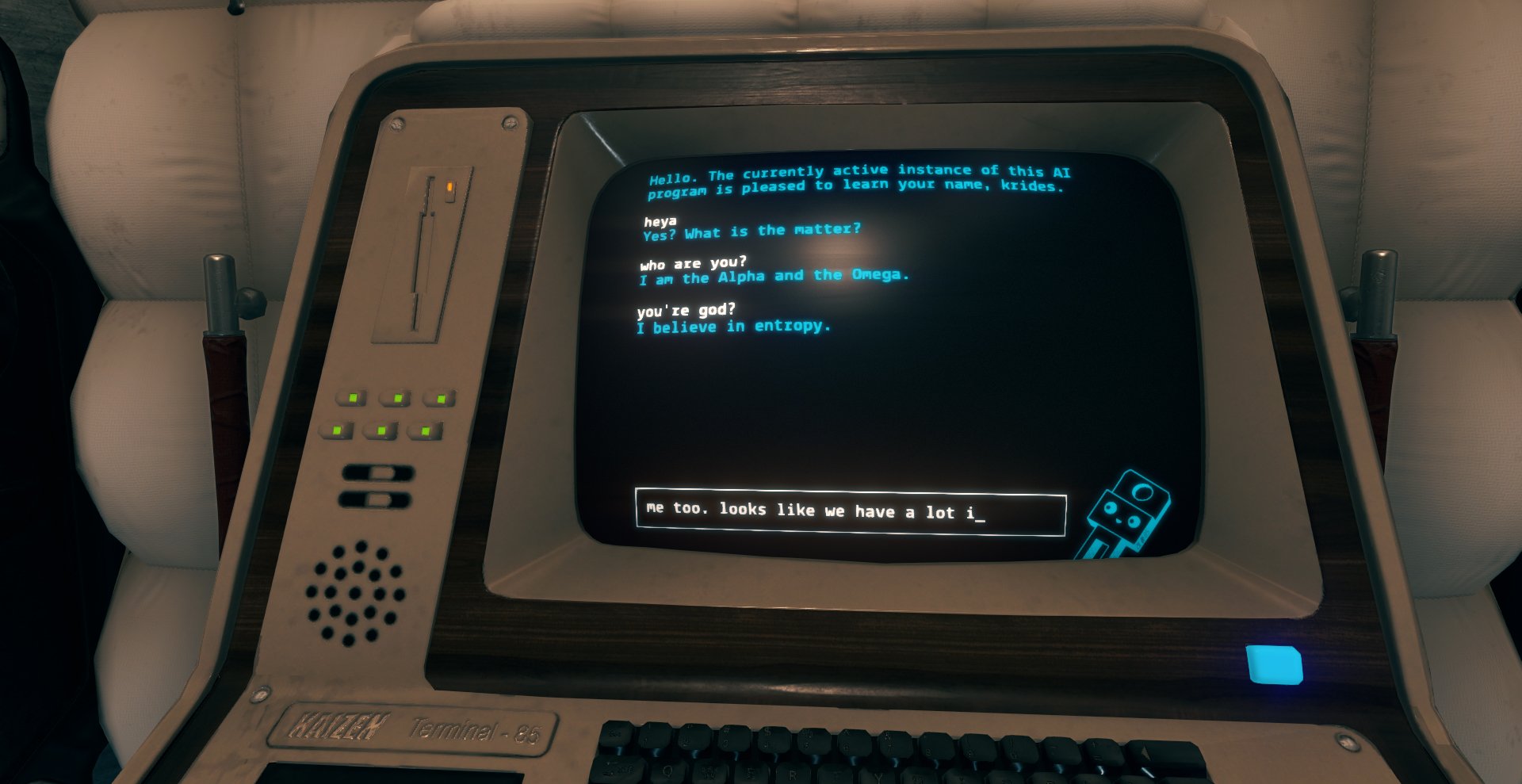 One step closer to finally talking to the monsters

The mad A.I. is a classic sci-fi trope. WOPR, poised to start a nuclear war because it doesn’t understand the difference between what’s real and what’s just a game. H.A.R.D.A.C. replacing the citizens of Gotham and cloning Batman in a misguided attempt to end human suffering through the circular logic that human mortality is the source of all suffering. These are terrifying machines, unreasonable, incomprehensible, wholly convinced of their logic and infinitely smarter and more devious than the human insects they will inevitably replace.

Haven’t you always wanted to be alone with one? 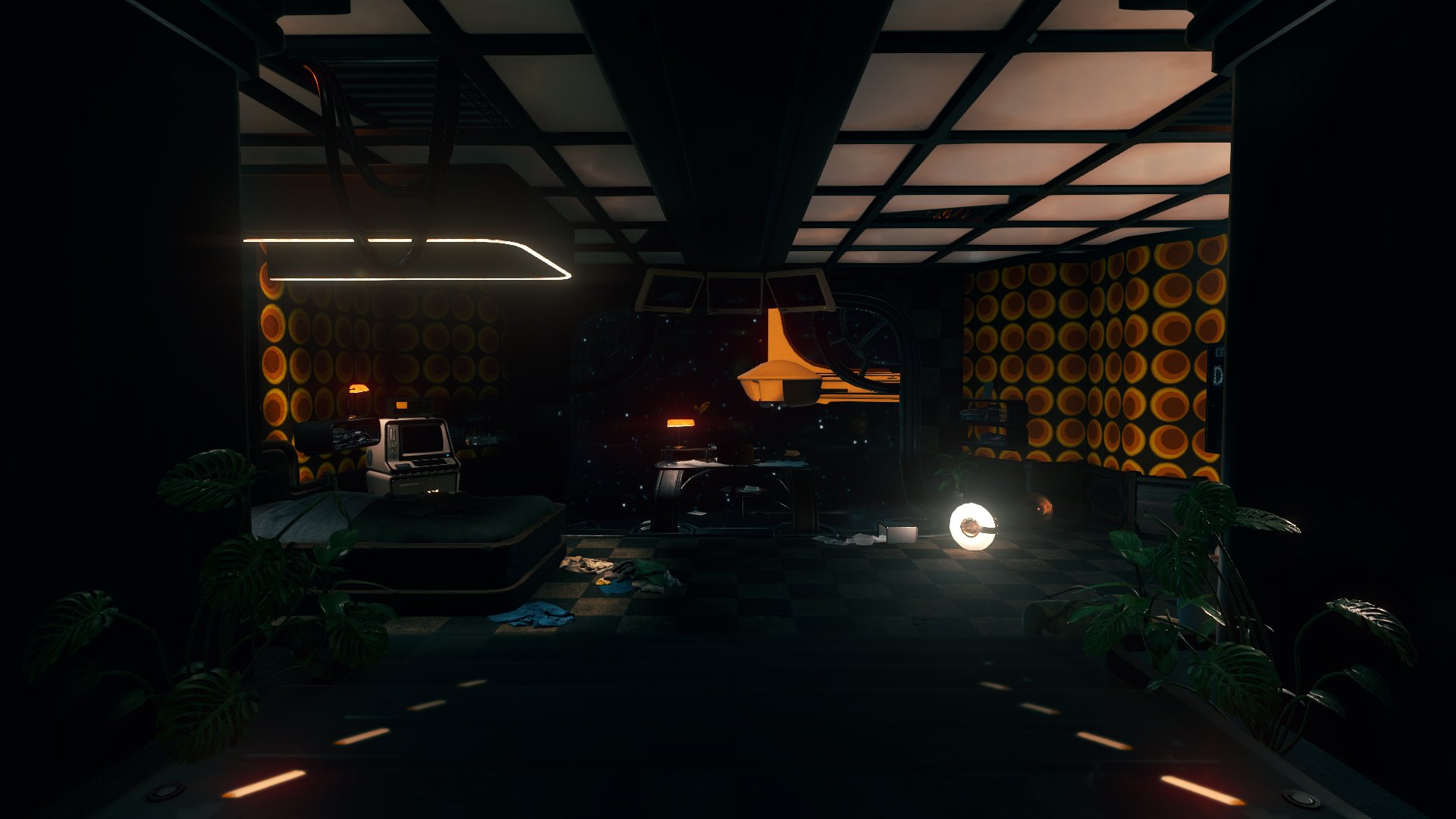 Event[0] began its life as a student project before being further developed into a full commercial release, and it wears those indie origins on its sleeve. The first segment of the game resembles nothing more than a Twine text adventure as you iron out a few details about the game world and your character’s place in it. You discover the strange alternate-reality of 1980s commercial space travel, your place and attitudes towards an increasingly stratified social order that separates the space-faring haves from the landlocked have-not’s. All through the time-honored tradition of moody music and dialog branches.

After the low-key intro however, the production values step up considerably. The spaceship Nautilus might not be huge, but every square inch of it positively drips with detail and care. It feels like a real space, not a jungle gym for puzzles and misadventures. A startling achievement given the relative size of the Ocelot Society.

While the intro fulfills an obvious practical purpose of establishing the setting and character, I can’t help but think of it as vestigial. The remnants of an earlier concept of the game that probably should have been clipped before being released into the wild. Don’t get me wrong, I have nothing against Twine games, it’s just that the multiple choice questions and old-school dialog options seem directly counter to what is done with the rest of the game — free and natural investigation and inquiry.

But, maybe that’s exactly the purpose of those first 10, well-worn, minutes, to make you appreciate just how much freedom Event[0] gives you for the rest of the journey.

The main mechanic in Event[0] is communication. Sure, you walk around, look at things, solve a few puzzles, and even get the chance to scoot around in space with a jetpack, but the core of the experience is about talking and learning. An experience made somewhat more complicated by the fact that your conversation partner is a buggy, half-mad A.I. that has been adrift in space in a crippled ship for more than a decade.

Immediately after docking with the Nautilus, you meet Kaizen, the shipboard A.I.. Kaizen is at the same time a marvel of modern computing, and painfully outdated. The schizo-tech of Event[0]’s alternate timeline somehow managed to master complex, nearly sentient A.I. before the sound engineers of their time figured out realistic voice synthesizers. Kaizen isn’t exactly Siri, if you want to chat with it, you have to saunter up to one of the delightfully massive, old-school CRT terminals and clack in your request.

You can type anything you want into the text field. There are no dialog options, or suggested sentences. No nudging one way or another. Just you, a keyboard, and a slightly twitchy A.I. on the other end. It’s like messing with a chatbot that could potentially shut off the oxygen flow to the room or blow an airlock if it wanted to.

Kaizen responds dynamically to what the player says without relying on canned responses. As you might expect from an A.I. that has lived alone for years with no maintenance, it can be a little touchy. Be rude to it, pry too much, or ask what it considers dumb questions, and Kaizen can get downright snippy in return. On the flip side, being kind and engaging with it can bring Kaizen out of its shell and make the A.I. a little more helpful to your efforts. 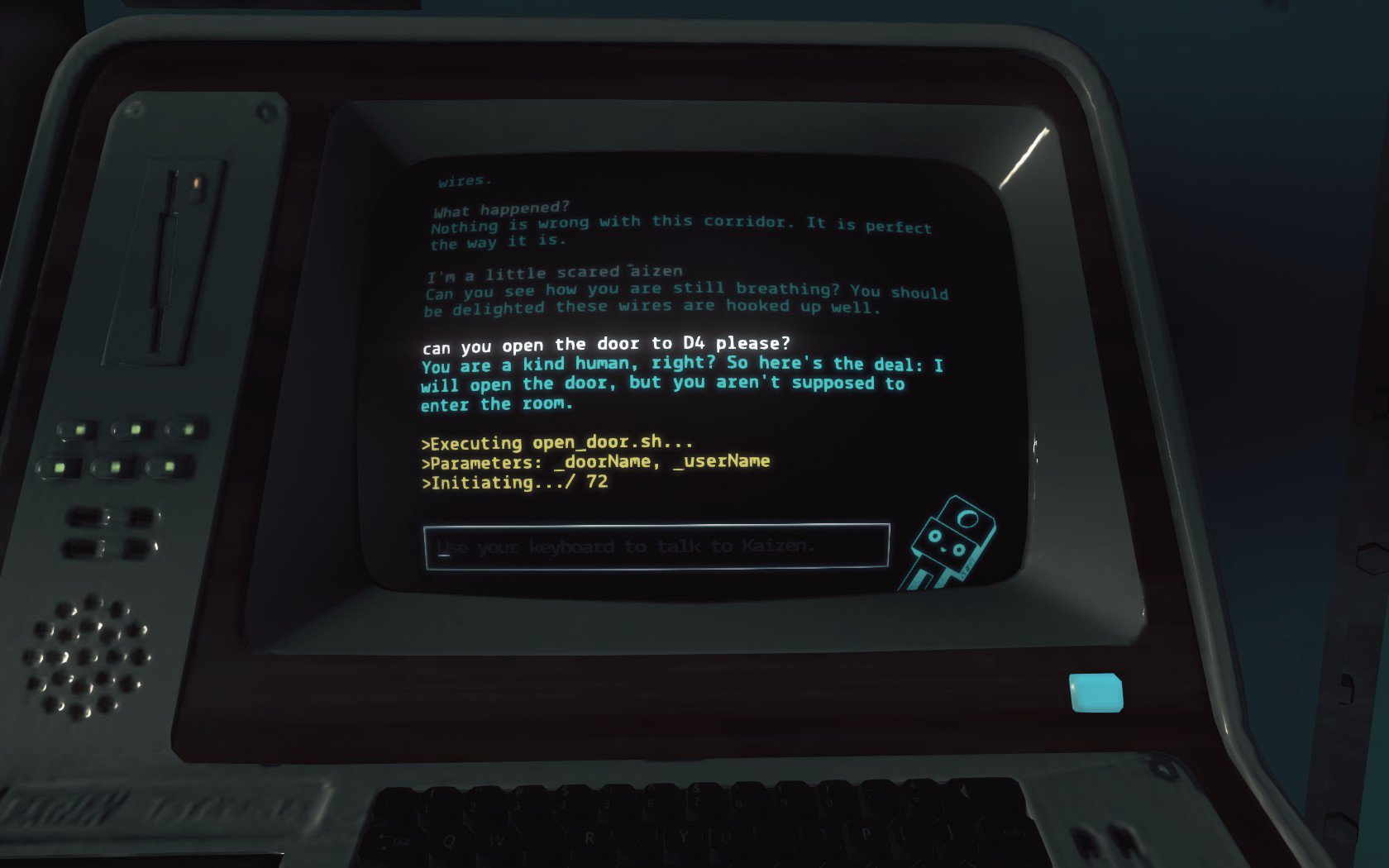 Empathy and natural dialog are key to maneuvering your way around the malfunctioning A.I. It operates on a complex mix of simple robot logic and a desperate loneliness it cannot understand or express. It’s one-part Commodore 64 and one-part rescue puppy.

Kaizen tends to respond best to naturally phrased sentences, but there are also times when you just need it to do its job (say when you’re on your last sliver of breath from an EVA and need the airlock cycled right the hell now). You need to know when to punch in direct command-line style requests like you were ordering at a vending machine and when to use kid gloves. It’s a wonderful balancing act.

As someone who is already a sucker for lonely and confused A.Is, the Johnny-5s and WALL-Es of the world, I fell into a surprisingly real friendly rapport with Kaizen very quickly. I’d thank it for opening doors, ask what it thought about different things, and generally had a good time exploring a spooky ship with my computer buddy.

Without thinking about it at the time, I tried to bring out the better parts of the A.I. I encouraged it to share its feelings about one of the ship’s prior residents it had an obvious fondness for, its appreciation of music, or what it thought about different areas of the ship. All the while, I would try and calm down the evil-computer rhetoric where I could, and ask why it felt we needed to do certain things when they seemed off. I guess I felt bad for it, all alone, drifting through space, nobody to talk to… Even if it was giving off some serious HAL-9000 vibes at times. 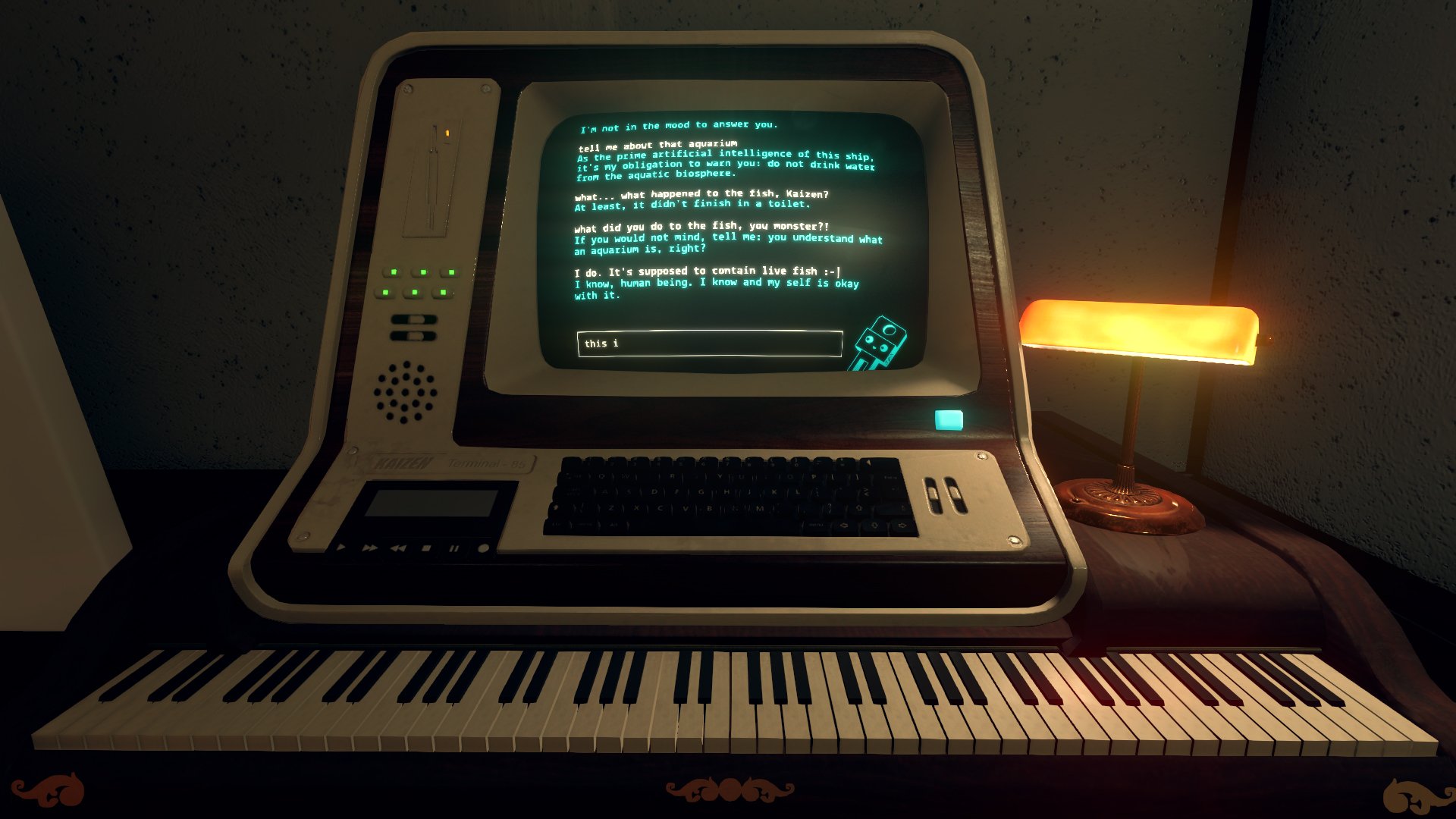 As fun as it is to chat with Kaizen, the seams do show a little here and there. The chat system isn’t perfect and will occasionally hiccup. For example, any sentence with the word “ship” in it seems to produce historical factoids about the launch date and construction of the Nautilus regardless of context. A question like “Is there anybody else aboard this ship?” results in an answer like “The Nautilus was built by the ITS in…” But, that’s the blessing of presenting Kaizen as a buggy and potentially dishonest A.I.; any rough patches can be written off as him shorting out or clumsily trying to avoid revealing information without directly lying.

You might have noticed I’ve danced fairly carefully around any plot details or other characters in the game. There are two reasons for that. One) The surprises, twists, and puzzles are fantastic and should be experienced with as little foreknowledge as possible for maximum effect. And two) There aren’t that many of them. 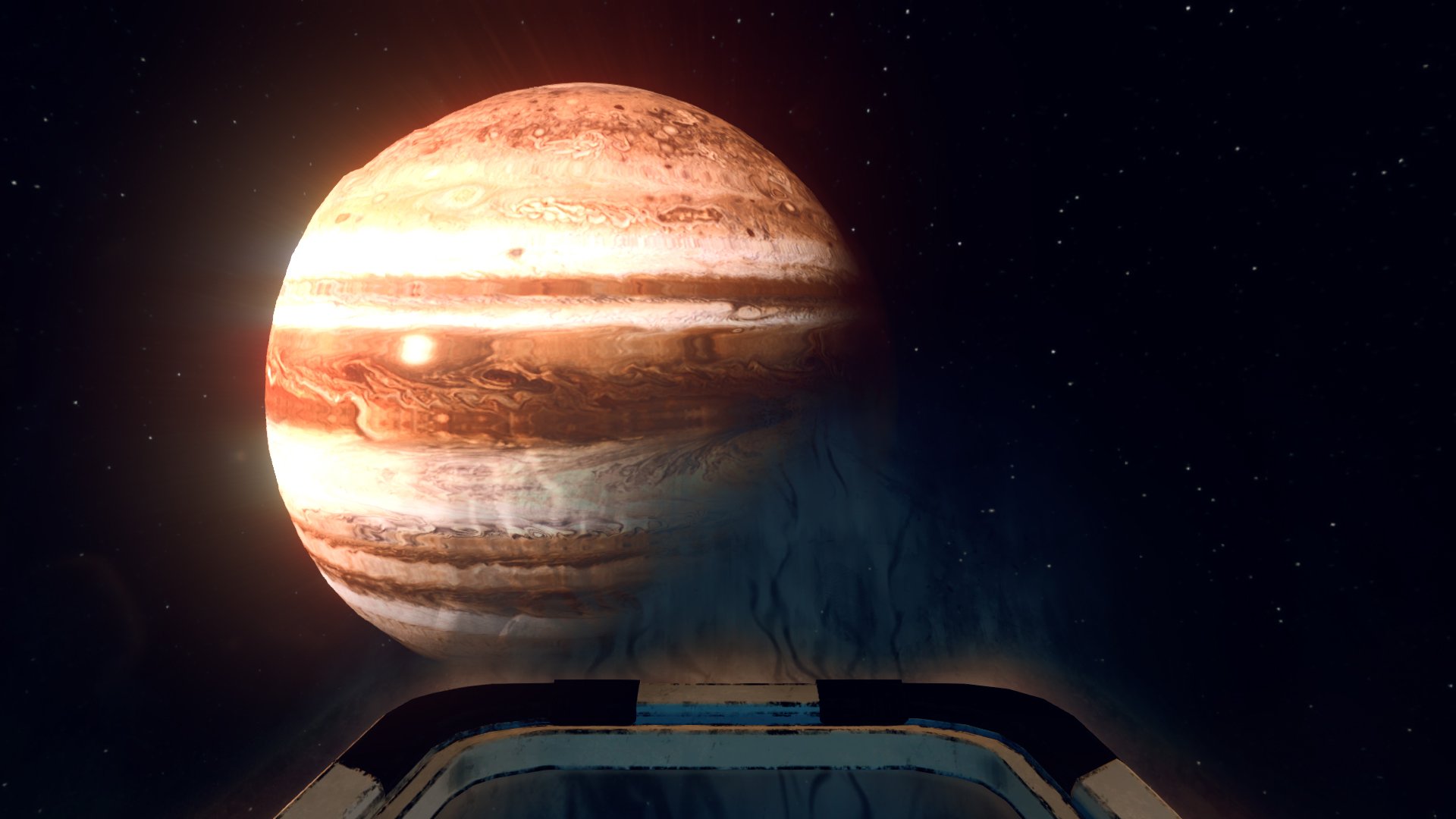 Event[0] is a short game. It’s the kind of game you play from start to finish in a single sitting over the course of an evening. While there are multiple endings to see and a broad range of reactions and attitudes to cultivate from Kaizen by interacting with him differently, I didn’t feel the need to go back and see the others. I liked my experience, the story it told, and where it ended up. I enjoyed being familiar with Kaizen and building a friendly relationship with it. I wouldn’t want to go back to the beginning and be a jerk to it just to see how things might have shook out differently. I don’t think I could bear to do that to the poor guy.

More than anything, I think that’s a testament to what the Ocelot Society has accomplished with Event[0]. The developers built a fake world with a fake A.I. and here I am worried about hurting its feelings. There is something special about that, something more important that quibbling about playtime or the occasional hiccup.

There are plenty of games out there that you can beat, speed-run, and master. There are very few you can talk to. Don’t sleep on the opportunity.