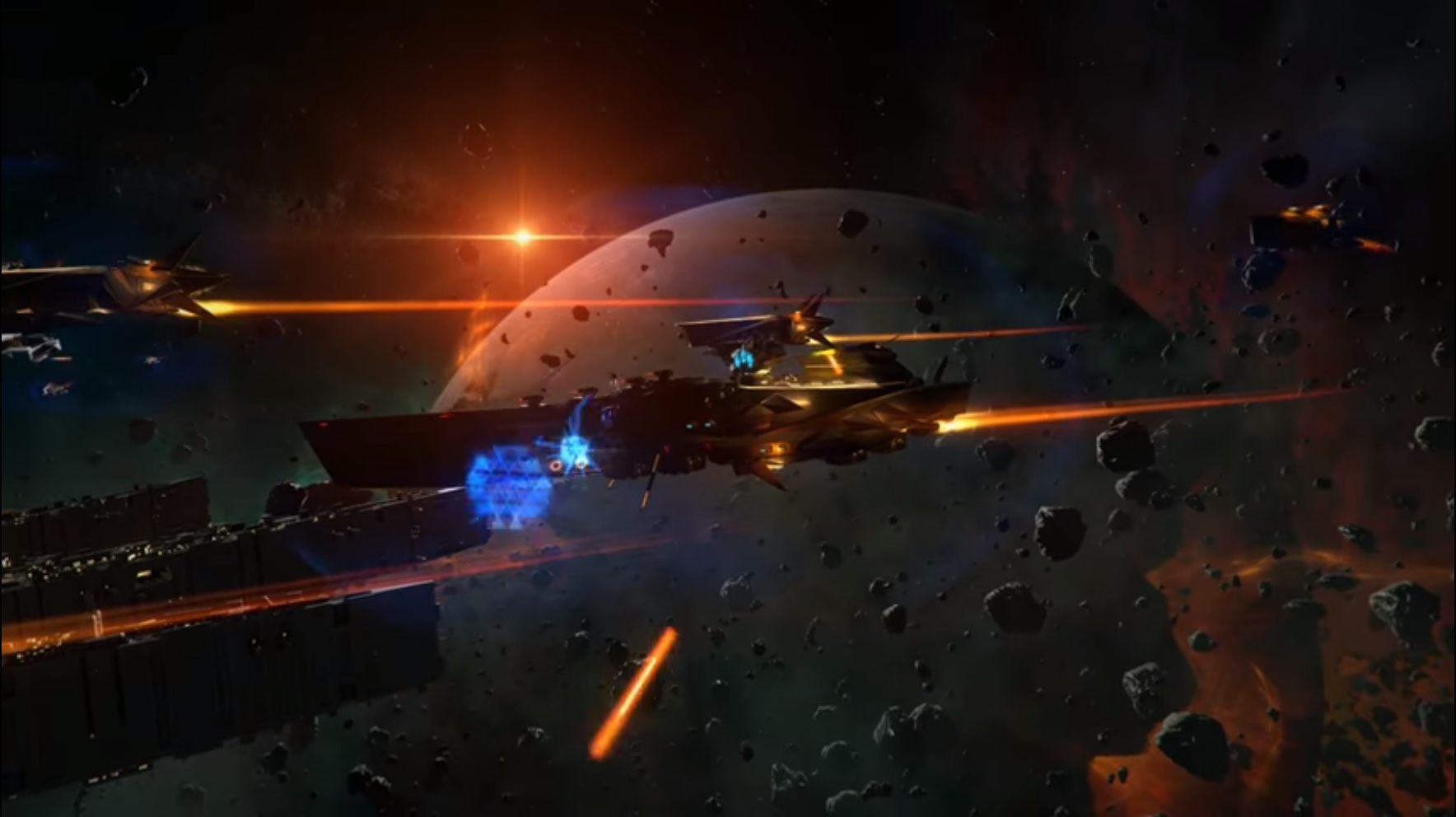 All we are is Dust in the wind

It’s 5AM, and my empire is crumbling.

The clock ceased to be a concern quite a while ago. My heavy investment in scientific pursuits over militarism means that although we have better tech than the competition, we’re not nearly as good at getting steel on target, and the enemy has been probing my meager defenses for what feels like decades. Raiders and pirates are blockading my most valuable colony worlds, and since my empire can’t seem to protect them, there’s talk of revolution on half a dozen systems. Meanwhile, I’ve made accidental first contact with a local cyborg insectoid race who live by one rule: expand, or die. They seem totally uninterested in negotiating peace, and the only reason my patrol ships are able to escape them is their superior engines and ability to bypass the beaten path. Once the robo-bugs learn the secret of warp drive, they’ll move in and wipe us out. It’s not a question of if, it’s a question of when. 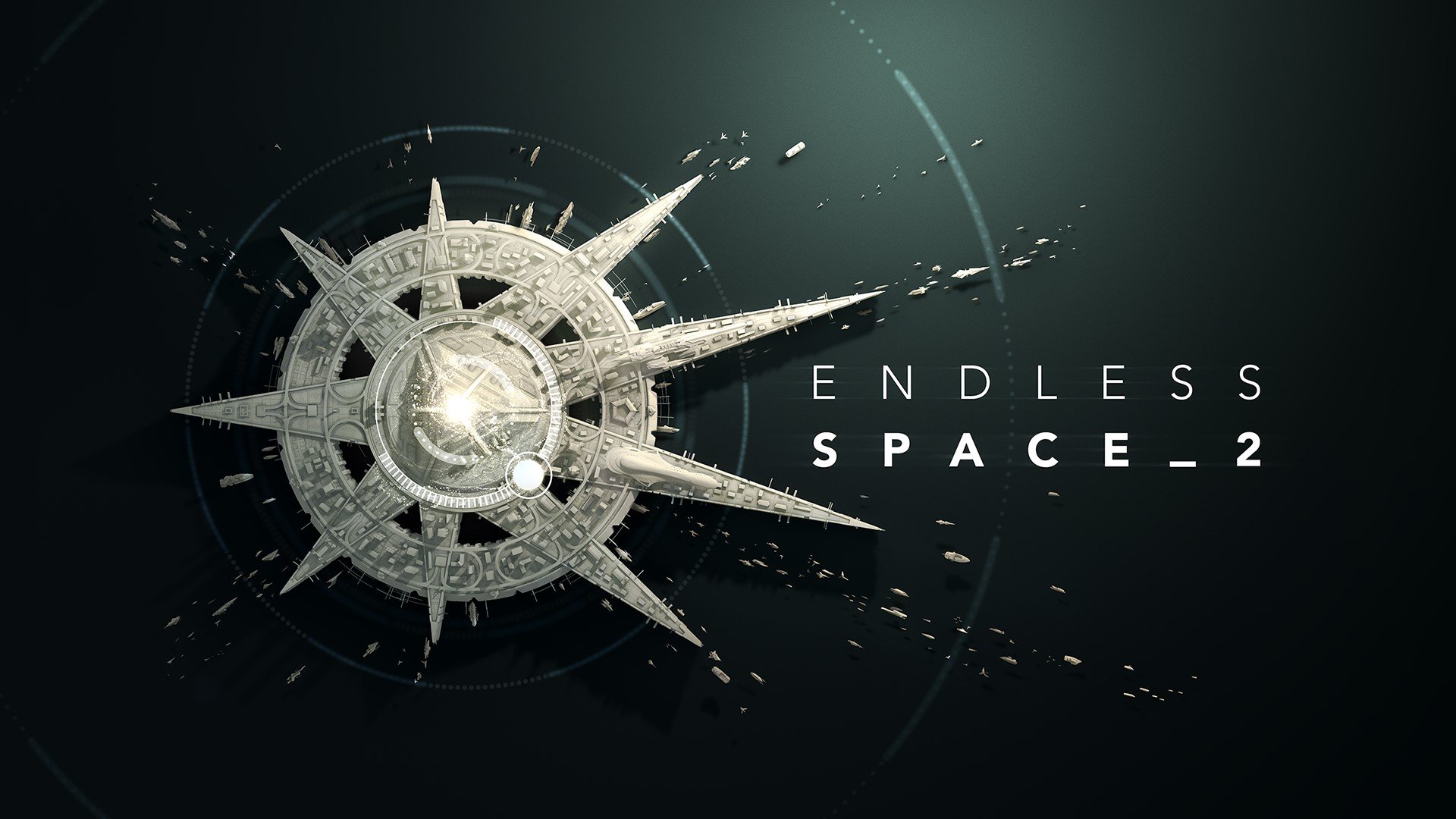 Endless Space 2 (ES2) is the most PC of PC games I’ve played in a long while. I’ve dabbled in Civilization and its offshoots, but wouldn’t describe myself as a 4X veteran. The genre is pretty intimidating, and despite the attractive interface, ES2 certainly doesn’t look very friendly to newcomers at the outset. It took me four hours to play through the majority of the tutorial, and I was still getting popups over 100 turns into my first game. Who’d have thought running a galactic empire would be so complicated?

Amplitude has carved out a niche for themselves in the PC space, creating titles in multiple genres that borrow from Civilization‘s model of exploration, expansion, exploiting resources, and exterminating enemies. Endless Space was the developer’s first crack at a spacefaring empire simulator, and it was well-received enough to warrant a sequel. ES2 has been in early access on Steam since October 2016, but it’s getting a full release tomorrow. Our reviewer for the first game praised the user interface, but lamented how easy it felt. Maybe it’s my relative inexperience, but that doesn’t seem to be a problem in the follow-up.

In ES2, you begin as the supreme leader of one of eight wildly different playable races. The galaxy was once populated by an elder race called the Endless, but they’ve been gone for countless millenia. Their essence is all that remains, and it forms the quasi-mystical currency known as Dust. You’ll need to manage Dust and several other resources including food production that helps your population grow, industry to build infrastructure, scientific ability to perform research, and influence that can help negotiations or speed up a purchase. It’s important to balance expansion with the needs of your established colonies, or they’ll become unhappy and begin producing less, or worse, become mutinous and actively work against you. Your decisions will guide your empire as it explores the galaxy, and it’s up to you whether to send out missions of peaceful exploration or grind the lesser beings you encounter beneath your space boots.

As you’ve probably guessed, there’s a lot to keep track of when you’re managing an empire across multiple star systems, and it would be easy for the inner workings to become unwieldy. Fortunately, the clean interface used in the first Endless Space was carried over, and navigating the various tabs dedicated to politics, research, economy, military, trade, quests and so on is completely painless. Being able to zoom in and out from the entire galaxy view down to a single planetoid and back again makes keeping track of your fleets and colonies a breeze. I never thought there was too little information on display, and the tooltips that came up whenever a noteworthy event occurred helped me feel like I was staying on top of things. 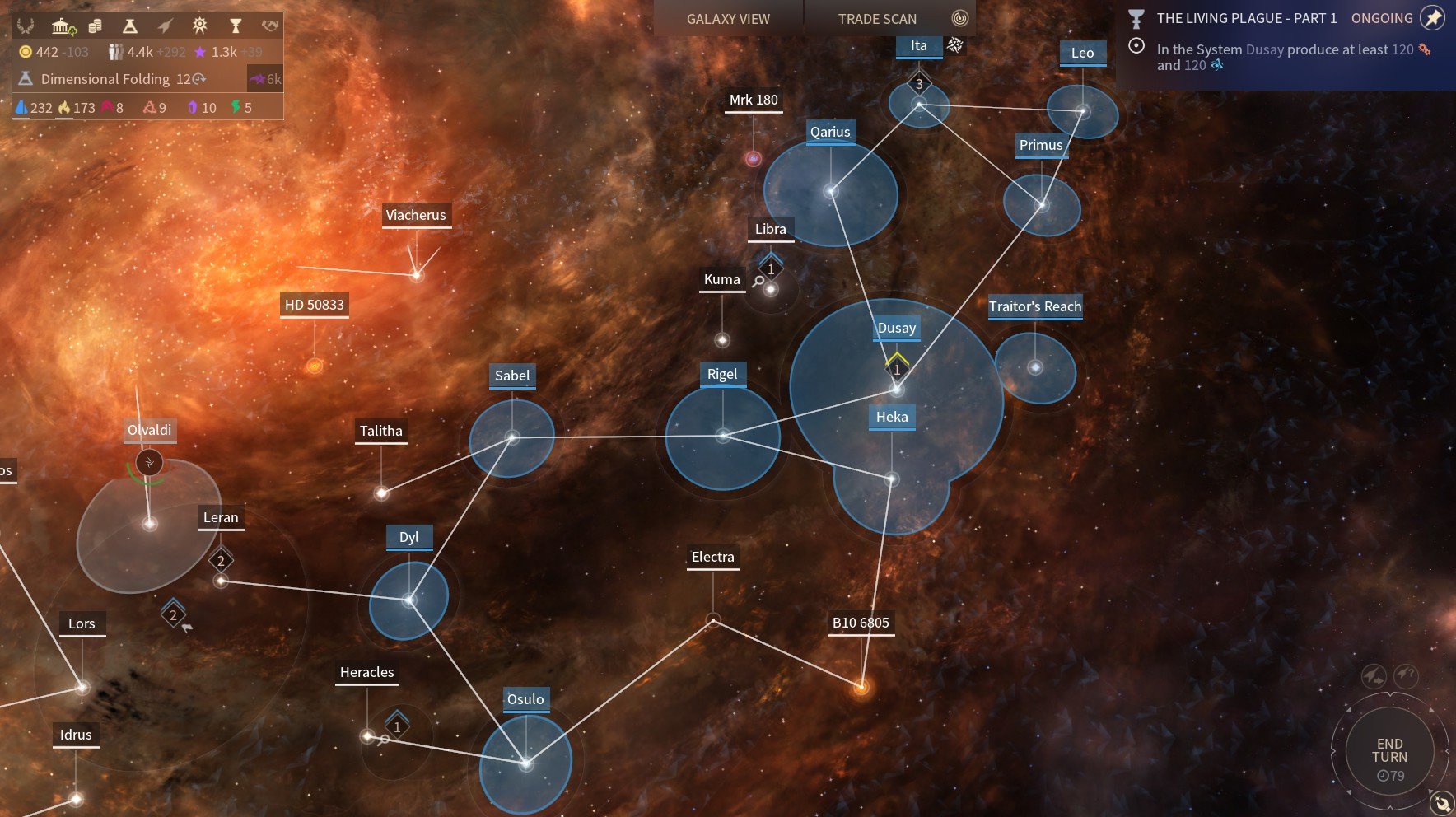 With so much going on at any given time, a game like ES2 can be hard to describe. The meat of the game is investing in the various tech trees and collecting the resources your empire needs to expand, trying to stake your claim to the majority of the galaxy before your opponents can do the same. Every turn, there’s a chance an event may occur that can speed or slow your expansion, and you may discover a quest that will reward you with resources if you can fulfill the requirements. There are tons of different planet types, each with their own benefits and drawbacks, and most of them have some sort of anomaly that can help or hinder your colonization efforts. Despite the similar nature, “Ice,” “Snow,” “Arctic” “Tundra” and “Boreal” are all different types of worlds, and each requires a different approach and a different technology to exploit.

Space is vast, and sometimes there isn’t anything to do while you’re waiting for a ship to get somewhere other than just mashing the “End Turn” button. Fortunately, the team at Amplitude have made sure there’s plenty to look at while you’re expanding the map. Every star, planet, alien, and anomaly has a humorous description you can read by mousing over it, and each playable race has their own storyline that plays out through quests you’ll discover over the course of a game. The playable races include humans and Grey-style aliens known as the Sophon, but also wackier lifeforms like the Horatio, a race tracing its roots to a single eccentric, solipsistic multitrillionaire with unlimited access to cloning technology. New to the sequel are the Unfallen, a sentient group of trees who believe that everything in the universe both begins and ends in fire. Midway through my first game, I ran across a machine race who were being terrorized by aggressive media personalities, and I had to drive them off by showing them I had a way better ship than they did. All of this contributes to giving the Endless universe a personality many other games in the genre lack. 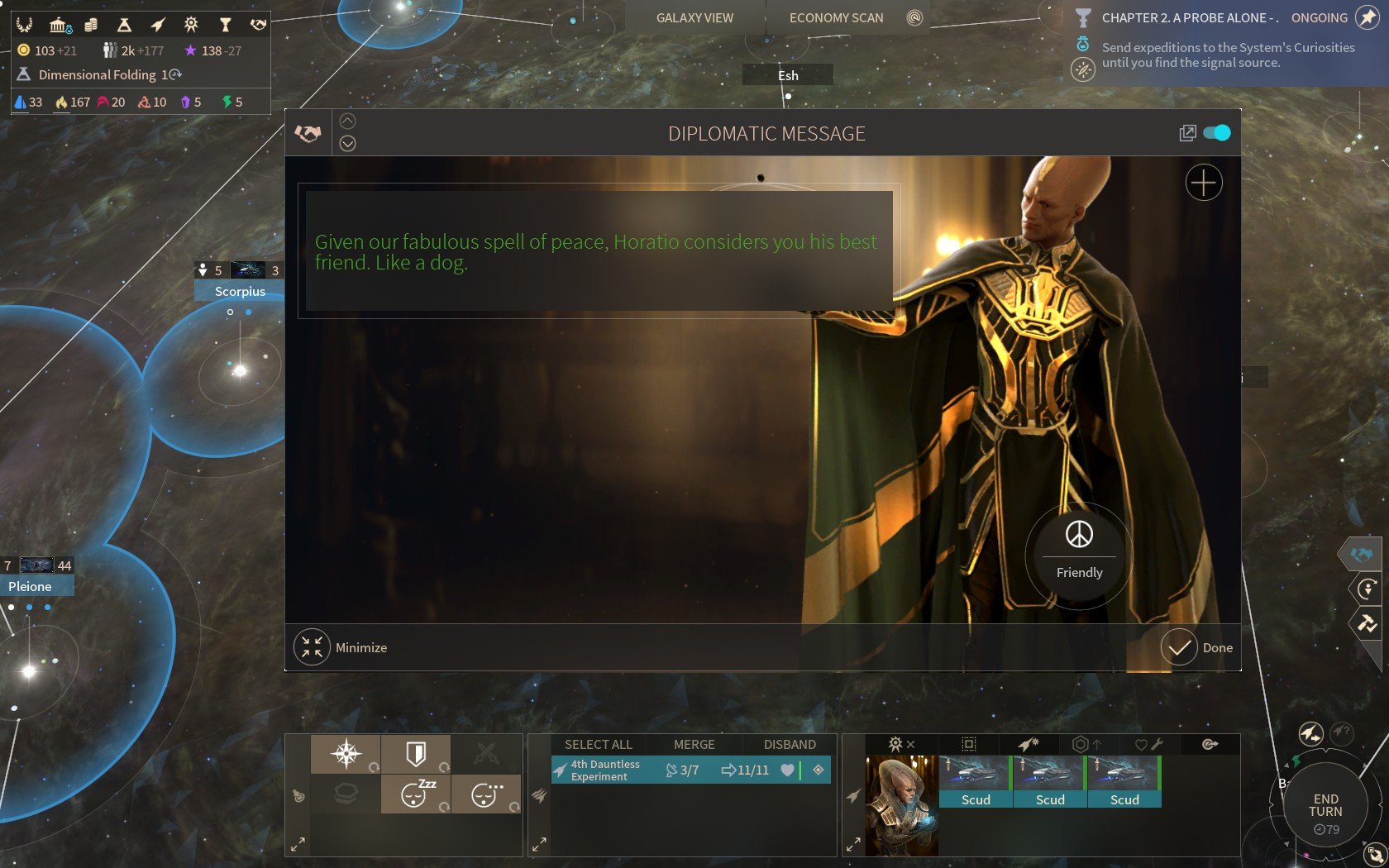 Once you get a few star systems under your belt there’s always something happening, and whether it’s the promise of finishing a juicy tech upgrade, uncovering a rare element deposit, or completing construction on a shiny new battlecruiser, the compulsion to play “just one more turn” is strong. There’s a lot of value for the money here; playing through each race’s storyline alone could take days, and randomized galaxies at the outset mean no two games are ever the same.

Due to the nature of the genre, there’s not a lot of action on screen. Battles remind me of the combat in Sid Meier’s Pirates! where two ships would circle and fire broadside salvos at one another. Before hostilities begin, you can analyze your fleet and your opponent’s, then choose from a few battle plans that somewhat resemble different football plays. After you choose your preferred range and tactics combat is automated, and you can choose to watch your fleets blast at one another in 3D, or skip directly to the results screen. Even a galaxy at peace has to be prepared for reavers and pirates, so researching a combat hull and designing yourself some fighting ships is essential. Unfortunately, I missed the part of the tutorial that told me how to do this on my first playthrough, which led to the scenario you read about above. 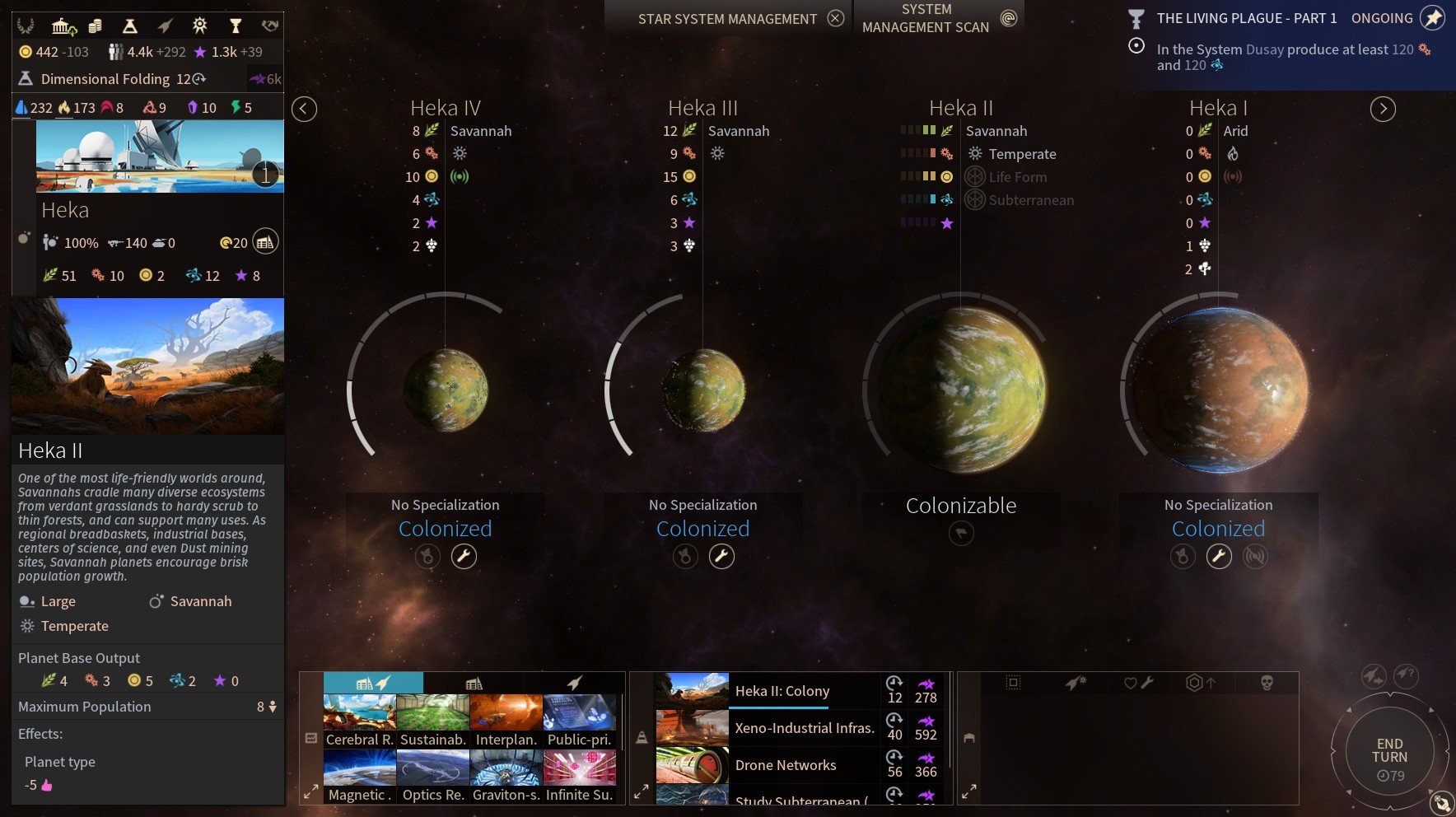 Endless Space 2‘s art and presentation are minimalistic, but that seems to be by design. There’s so much information that needs to be accessible that there usually isn’t much room for artwork. This means that whenever the hand-painted art does make an appearance it’s notable, and this tends to happen when you do something extraordinary, like recruiting a hero or founding a colony on a distant world. You’ll also see a new moving painting whenever you’re presented with a decision, a new quest, or when something significant begins affecting your empire. The music is similarly restrained, smooth beats encouraging exploration on the main galaxy map and faster music taking over when one of your ships encounters an aggressor. The overall presentation is lovely, and it doesn’t distract from the data manipulation at the heart of the experience.

I didn’t try out the multiplayer since this type of game takes long enough even when you don’t have to wait for someone else to get back from the bathroom, but ES2 supports up to eight players duking it out in the same galaxy. There’s also built-in mod support, so avid players will be able to create custom game modes and races to extend the game’s life even further. 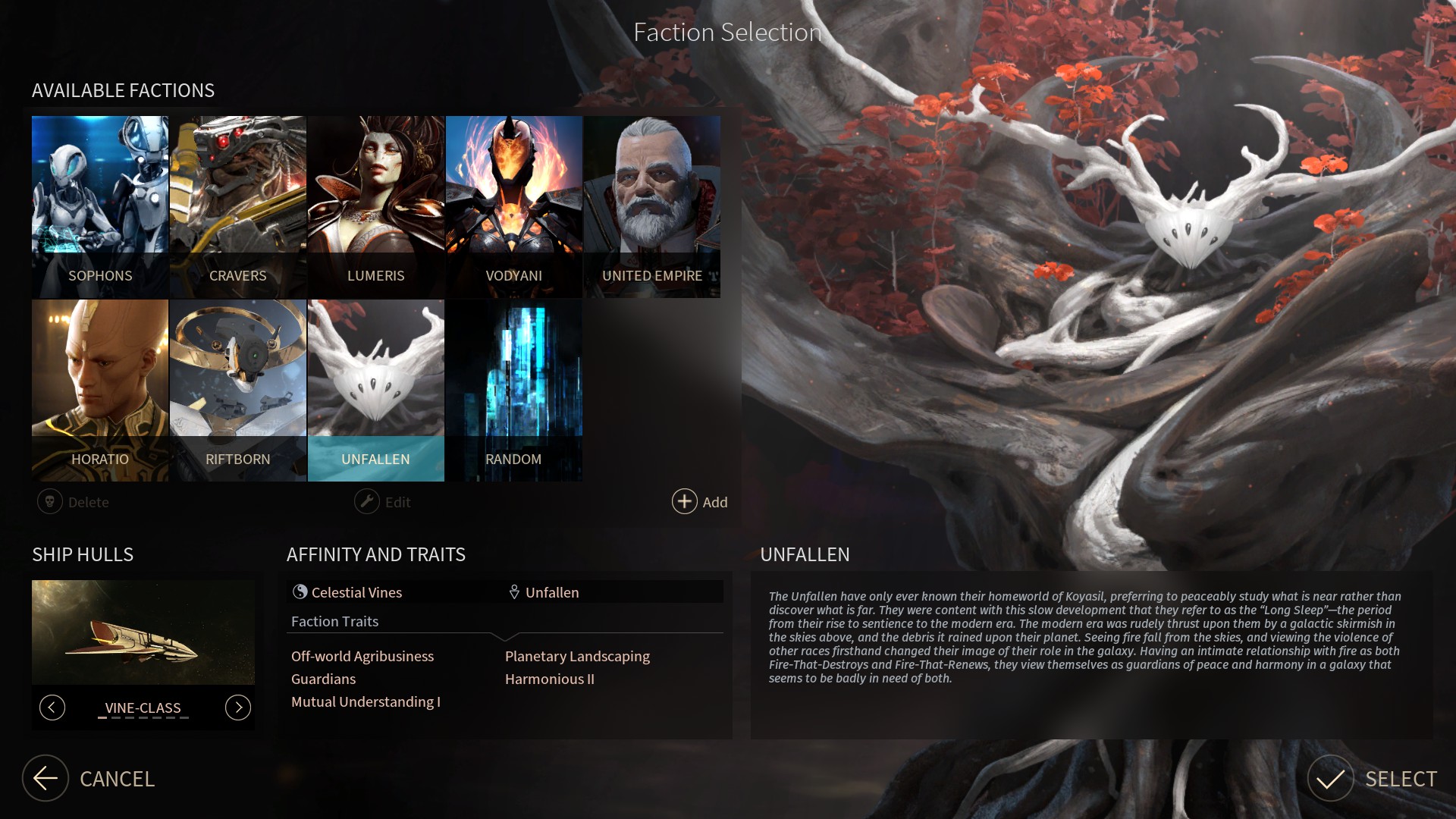 I did notice a few minor problems during my time with Endless Space 2. Most notably, I ran into some occasional typos and unfinished scripting. Minor stuff, but it sort of pulled me out of the moment when one of my advisors told me that the $MissingUIelement race was being forced out of my system by a rogue artificial intelligence. My computer isn’t the greatest, but I noticed some UI sluggishness once I had uncovered the majority of the galactic map, and the game soft locked on me once after a three-hour session. Fortunately, frequent autosaves meant I barely lost any progress, and most people’s play sessions probably won’t go that long. Considering how much data is being tracked at any given moment, ES2 is remarkably stable and low-impact.

The one other complaint I have is one that I don’t know how to fix. As Endless Space 2 is set in (gasp) space, the developers had to come up with a lot of futuristic sounding technology you can unlock to progress your civilization. But since everything you’re looking at is science fiction rather than science fact, it can be pretty hard to judge which upgrades you should work towards. This has been a problem since at LEAST 1999’s Alpha Centauri. I know what gunpowder will do for me in a Civilization game, but trying to compare and contrast the benefits of researching Focused Plasma to High Energy Magnetics or Unstable Isotope Machining at a glance is damn near impossible. There’s a detailed description of what each unlock will provide for you, but with over 100 technologies to research, you could spend hours just trying to figure out your optimal build order. 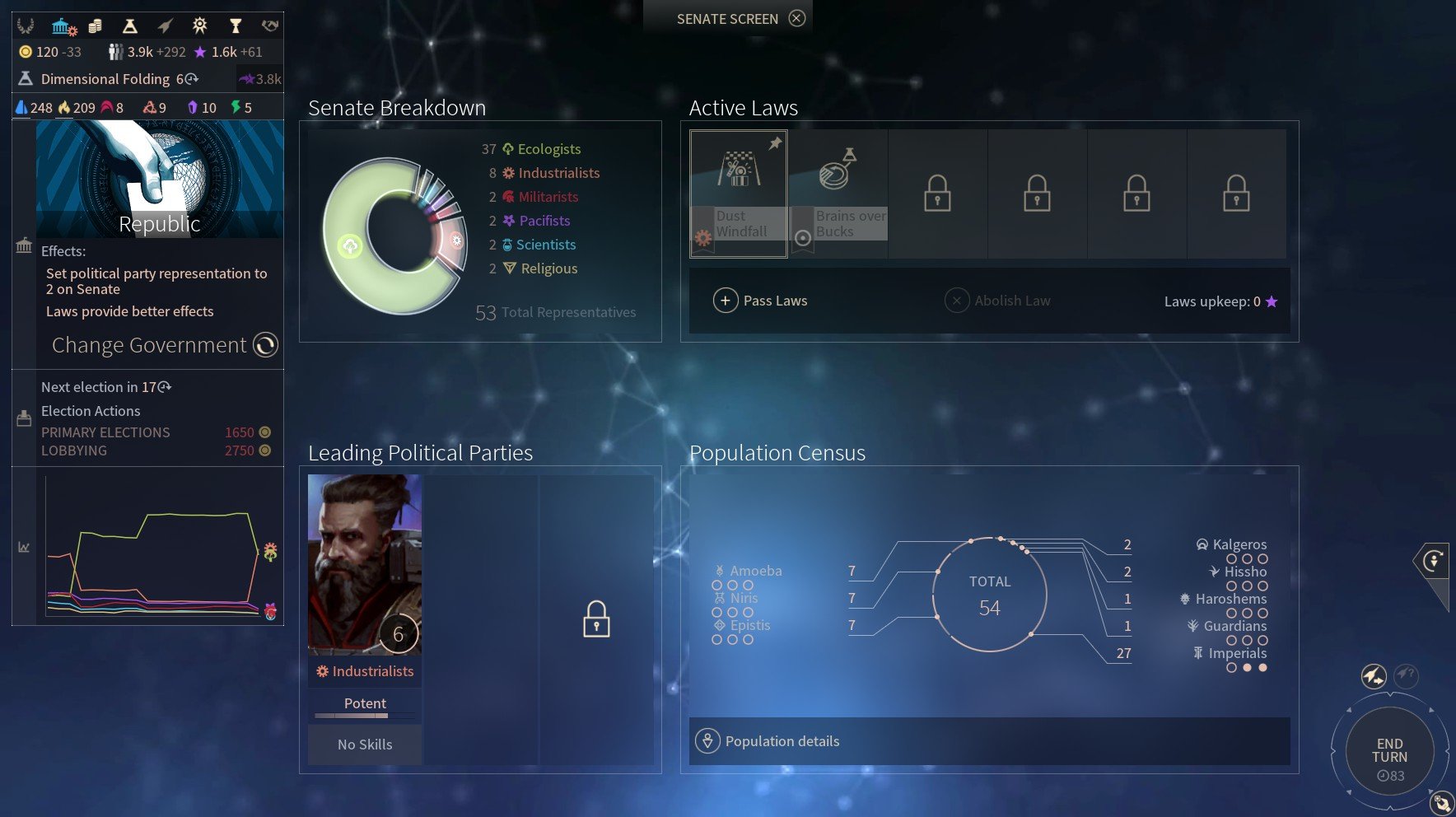 I had a lot of fun with Endless Space 2, and I’m looking forward to putting more time in with it. Despite my initial reservations about diving into the deep end, I soon found myself invested in the stories that came from my triumphs and failures. There’s a lot to like here if you give it a chance, and even if strategy isn’t your preferred genre, you might find that it’s worth your time to give ES2 a shot.