ELEX Gon’ Give It To Ya

Think of candidates for the platonic ideal of what you might call a “B-game,” or a “Cult game,” or any number of pop-cultural terms we have for a credible work whose flaws and foibles undermine its chances at wider success, and you’ll likely find a Piranha Bytes title somewhere on the shortlist.

Ironically, it actually takes wider recognition for cult status to feel genuinely earned, and despite nearly two decades of attempts, Piranha Bytes continues to stand in the long shadow cast by its more popular competitors.

That brings us to the big question: Whether or not ELEX, their latest work, can bring them that recognition. 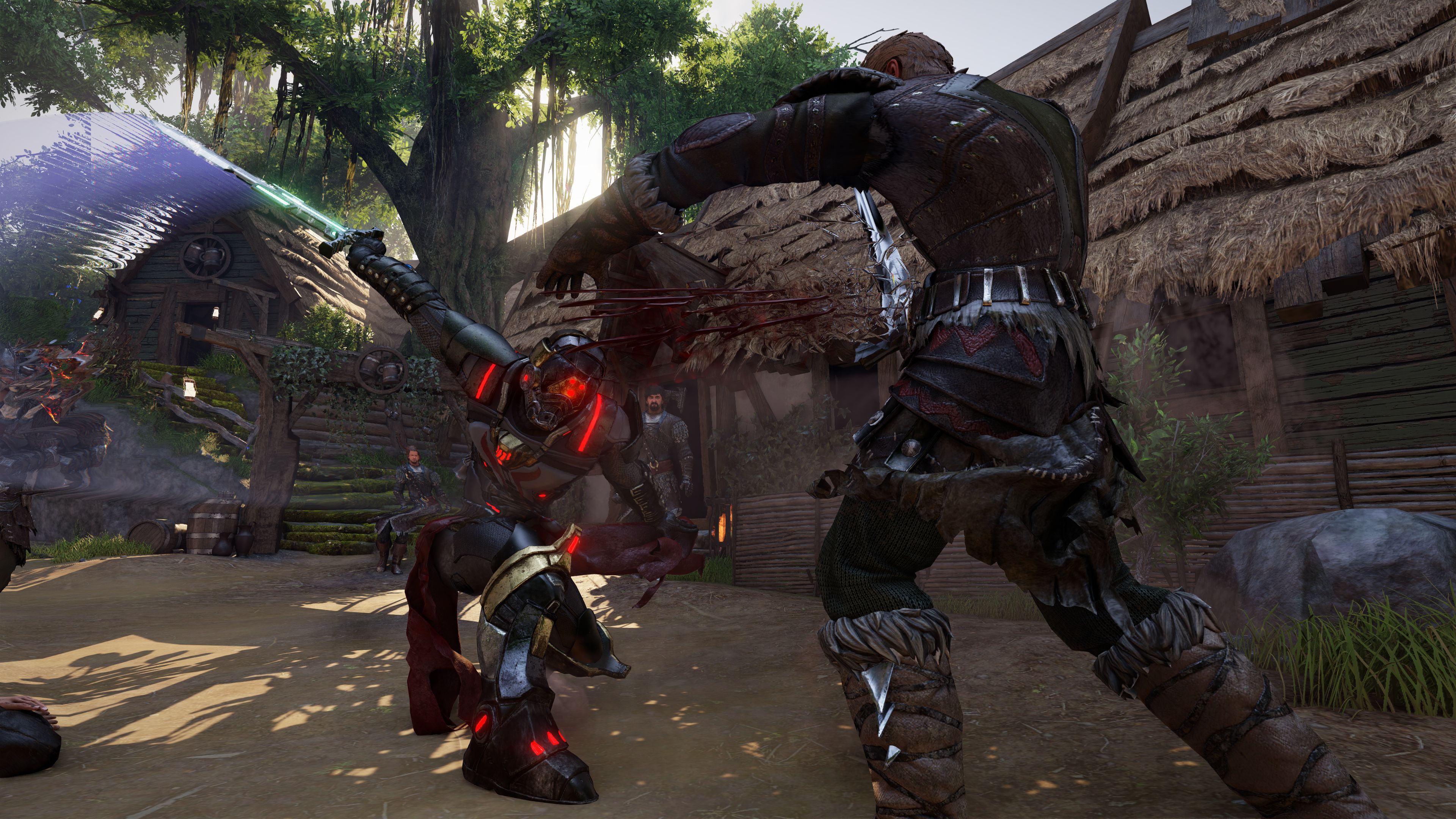 The good news is that after years of toil, ELEX actually does bring Piranha Bytes closer than ever to that faraway plain. In fact, from the game itself, it feels like their ambitions have only grown since the days of Gothic and Risen. Whereas those two series could (somewhat unfairly) be dismissed as “big-in-Europe” knockoffs of the Elder Scrolls (despite Gothic predating Morrowind by several months), ELEX manages to carve itself a conceptual space out of that most potent of nerd predilections: The Mashup.

ELEX begins on the planet of Magalan (or “Maah-guh-laaaan,” going by the intro cinematic), where human civilization has been given a hard reset by an encounter with a giant comet. In the wake of the disaster comes the titular Elex, a mysterious substance that changes everything. This Unobtanium-esque material is so powerful that it manages to merge no less than three popular genre tropes into a single, semi-coherent setting, by dividing Magalan between four different factions, each with different approaches to using the all-powerful resource.

You’ve got the Berserkers of Edan, a bunch of druidic Viking types who look like they sailed in from some Nord concept art. They’ve gone full Luddite, rejecting the “Old World” by living in harmony with nature and abhorring the presence of Elex. Their people even freak out and think of you poorly if you bring up your menu or inventory screen in public, as they will not tolerate such technological devilry.

On the other hand, the Clerics of Ignadon live for tech, and dwell in volcanic fortresses like off-brand Sith Lords, surrounded by drones and mech suits. Elex powers their stuff, which ranges from power armor to plasma guns.

The Outlaws, for their part, don’t put much stock in the rules others live by, and populate the desert, dressing like Mad Max extras and fighting over scraps while huffing Elex to get high.

Finally, the Albs have taken to Elex so well that they’re completely saturated with it, using it to gain great power at the cost of becoming a civilization of psychopaths. They play the game’s principal antagonists, and at the beginning, you’re one of them. 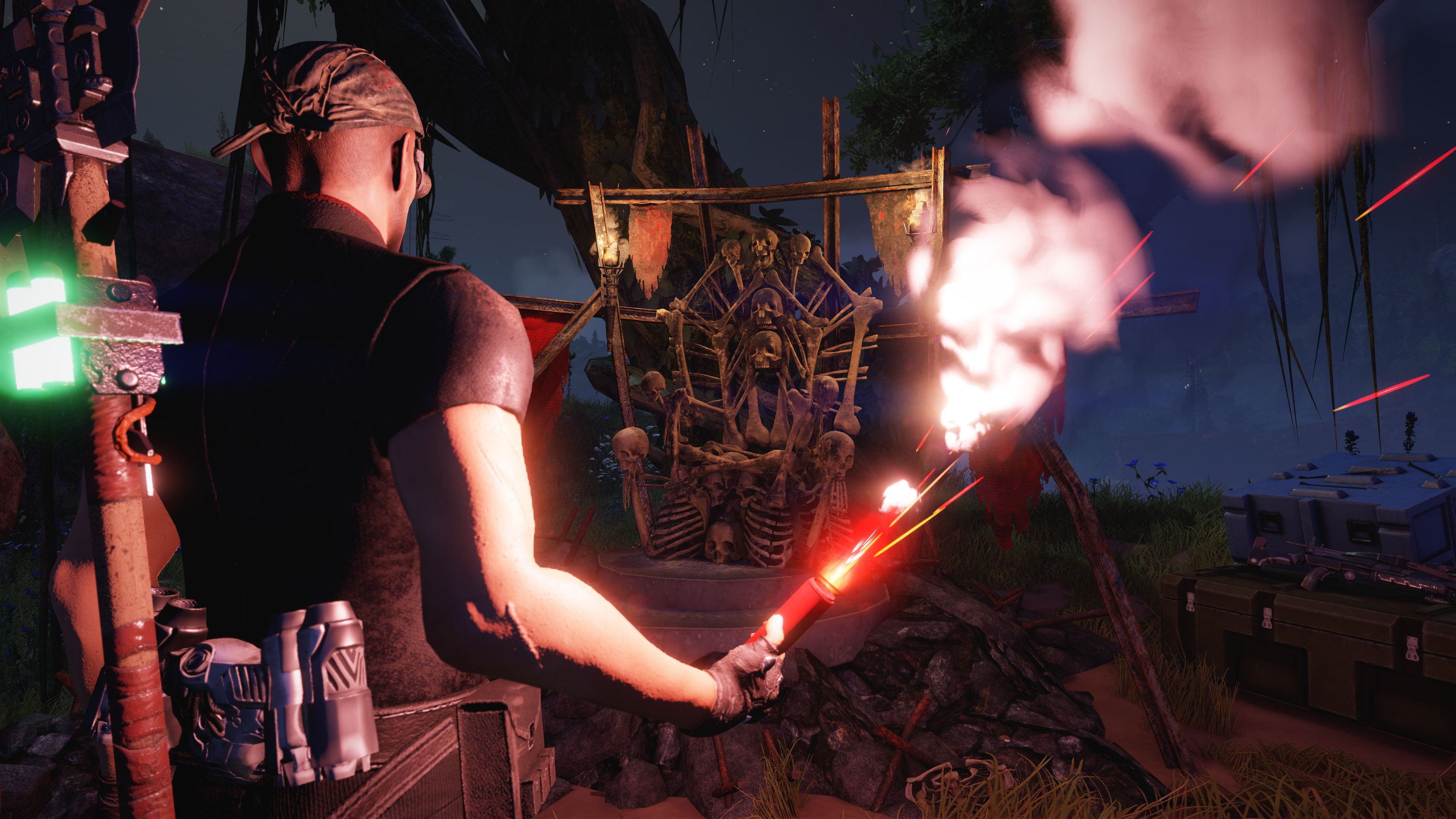 Not for long, though, as in true “let’s begin an open-world RPG” fashion, you’re shot down, left for dead, and awoken from your stupor minus all your cool stuff and talents in a tutorial-friendly section of the world.

In the true fashion of Piranha Bytes games, ELEX generally fails to make a good first impression. A poor choice of starting area and the lack of polish in the initial conversations make the game look not just like an also-ran to Skyrim but an upscale version of Gothic itself. Characters just stand still, droning on and occasionally shrugging like this was the first Mass Effect. Combined with wooden writing and an early affection for fetch quests, I would seriously have dropped the game if I hadn’t been tasked with reviewing and thus obligated to put up with the first few hours.

Beyond that, though, ELEX opens up and shows off the scrappy, rough-edged charm that endeared so many players who could put up with the rest of it. ELEX‘s setting is easily the most interesting one Piranha Bytes has come up with to date, and takes advantage of the inherent dissonance between its clashing aesthetics and motifs to set up a world that’s more than just its pretty, varied environs.

As players tromp around the world, they’ll uncover the depth of the setting, and better yet, see their actions, decisions, and contexts stretch into a layered web of causality and relationships. Despite how generic everything looks at first glance, I definitely wanted to know more and more as time went on. ELEX quickly leaves players free to go where they choose, restricted only by their will, their equipment, and the recharge limits of an otherwise very handy jetpack. The (somewhat underwhelming) main quest is carefully tailored to allow for players to get lost and just do their thing without feeling like they’re ignoring some critical aspect of the narrative. It’s a far cry from the incoherence I saw trying to play Fallout 4 or Skyrim, and it’s nice to see at least one large-scale RPG try to stick closely to old-school “do-anything, kill-anyone” ideals of player freedom. 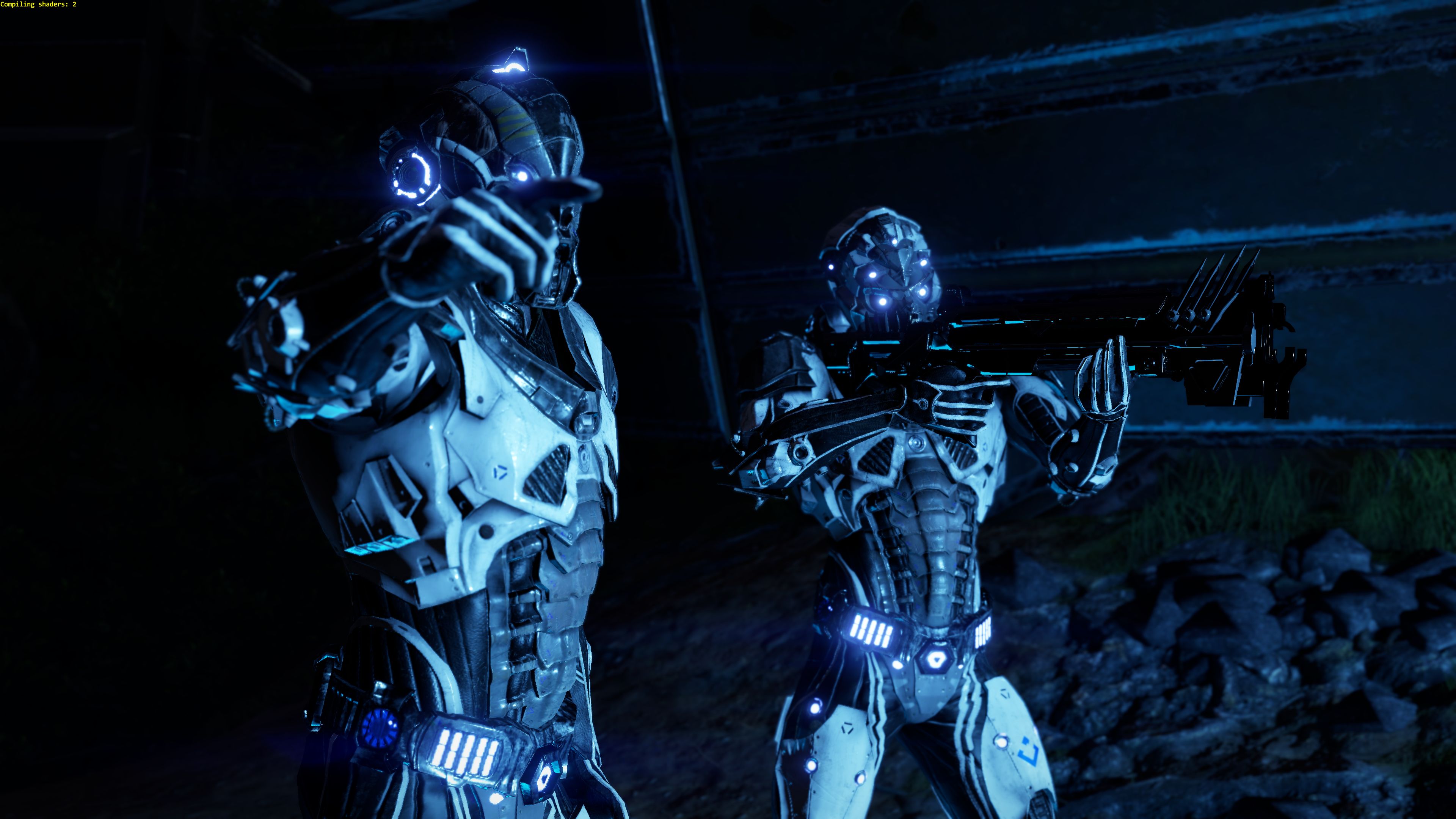 That freedom, though, comes at a cost. Just as the game is less concerned with “player-friendly” quest design, it’s also less concerned with ensuring a smooth experience. A lack of level-scaling ensures that players can wander into areas they’re really not prepared for in the course of exploring or even just following quest markers. Some might see this as a welcome lack of hand-holding, but others may be turned off by the sudden and unexpected spikes in threat.

ELEX‘s combat is easily the weakest portion of the game, which isn’t great for a game that purports to be an action RPG. Incorporating stamina management and a somewhat Souls-like control scheme, ELEX is pretty tough, even on Easy settings. Unfortunately, the toughness doesn’t stem from the same, Souls-like (or Monster Hunter-like) emphasis on learning a given weapon’s animations or combos intimately, but rather that the delays and windups built into melee animations are so long or awkward that committing to any attack feels like running full-tilt down a steep hill. 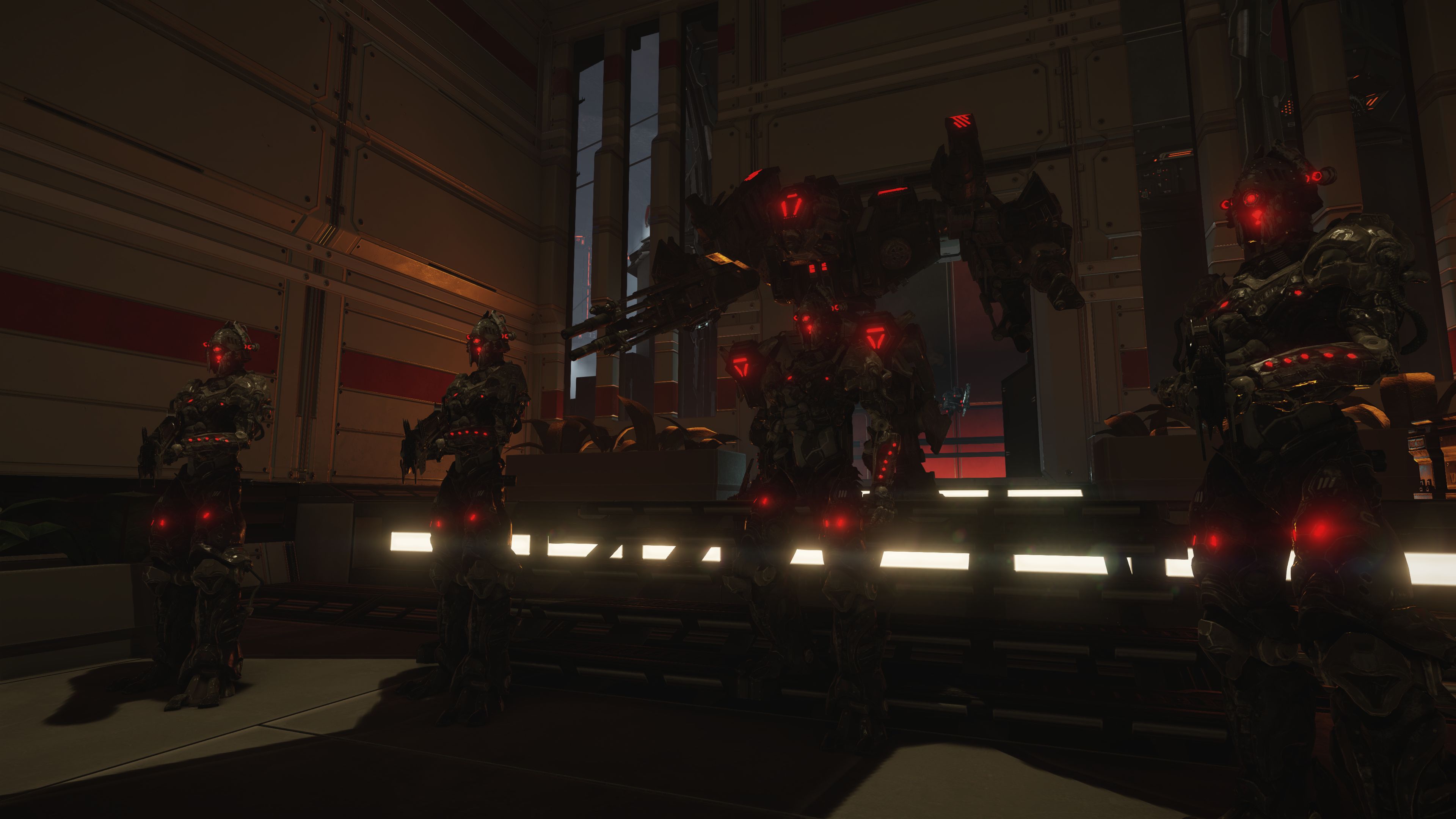 One can at least get used to it over time, though for me ELEX‘s combat never really graduated out of feeling merely tolerable. Ranged and gun-based fighting maintains the feeling of a low-budget third-person shooter, and suffers from most guns through the early- and mid-game feeling woefully underpowered thanks to having to be “balanced” against melee weapons arbitrarily. This even has knock-on effects for the narrative, since one faction relies heavily on crappy guns, and aligning with them becomes inherently less interesting when their equipment is that much worse than the competing brands’.

Less easy to get used to are the game’s technical and performance issues. Playing on a base-model PS4, I noticed numerous framerate hitches (often in places that didn’t seem especially busy) and drops, as well as major drops during some in-engine cutscenes. The interface and text also remain optimized for PC, forcing console players to move close to their TVs to read stats or item descriptions, as well as deal with a fairly bland, mainly text-based menu system to manage inventory and equipment. The AI is also on the less optimal side of dopey, with both enemies and companions frequently getting caught in scenery or standing stock still when they should be fighting.

All in all, though, the game remains an impressive, if flawed, effort. Toting an interesting setting and some standout design choices, ELEX goes farther than any previous Piranha Bytes game in making the case for sticking with it in pursuit of a certain old-school ideal of RPG gaming, even if it can come at a cost in polish and presentation.