The finish line is in sight and a pair of homing missiles are bearing down on my position. I sprint, narrowly dodging one, and leap from a ledge to avoid the other. I breathe a momentary sigh of relief before the panic sets in. I realize my trajectory is sending me right into the path of a laser beam. Soaring through the air, I struggle, desperately trying to avoid the spinning shaft of light, but it’s too late. The all too familiar feeling of death embraces me.

There’s a fleeting moment of frustration. Screams of profanity emanate throughout the room. Within seconds, though, I’m off and running once again. A wide grin replaces my scowl. I make another attempt. And another. And several more after that. I inch closer and closer to my goal, eventually surmounting the challenge, only to be presented with by an ever greater one. 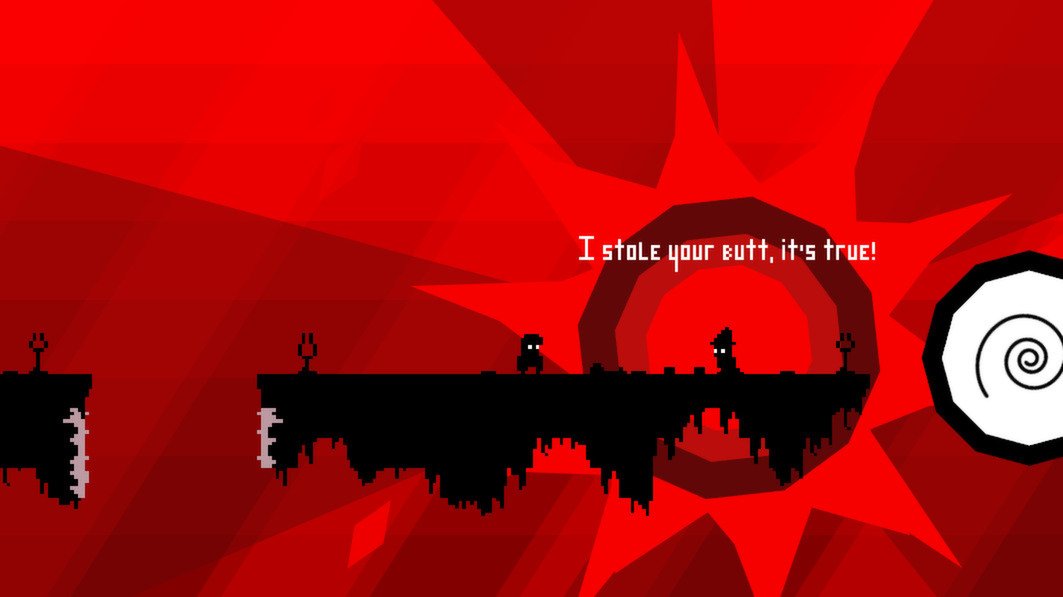 He lost an arm in the Disco Wars of 1515. The War of Rock ‘n Roll claimed his eye. Defeating DJ Deadly Skillz cost him both legs. Eviscerated and at wits’ end, our hero is now without a butt, thanks to the villainous Groove Wizard. Thus begins Electronic Super Joy.

The ensuing adventure is a bizarre and exhilarating one. It’s a flippant tale of revenge brimming with off-color humor, alluring environments, and some of the most exacting platforming in recent memory. Oh, and the music isn’t half bad either.

Electronic Super Joy draws players in with a stark visual design and an infectious soundtrack. Silhouetted figures are cast against brightly-colored landscapes with intense flashing lights. That vivid aesthetic is backed by pulsing electronic dance music. It’s an ideal match if there ever was one. Reminiscent of a rave or nightclub, the scenery and beats intertwine and coalesce into an almost synesthetic experience.

The music isn’t just catchy though. It’s the driving force behind the entire game. The notes bleed into the art and level design, with each track serving as inspiration for one of the platformer’s many formidable obstacle courses. These relationships seem to reverberate throughout the adventure, harmoniously creating a unified experience where each individual facet is interlinked with the others.

The soundtrack plays a motivational role as well. Electronic Super Joy is difficult. It’s very difficult. Drawing inspiration from titles like Super Meat Boy, the game challenges the player with a myriad of hostile environments and deathtraps that must be approached in a very precise manner. It could be very frustrating, but it isn’t. Thanks to the liberal placement of checkpoints, near-instant respawning, and uplifting tunes that never miss a beat, the game spurs the player on in a rather encouraging fashion.

The various hurdles along the way seem to ebb and flow with the musical accompaniment. Always upbeat, it constantly charges forward, serving as an ever-present incentive to press on. Even in the brief moments when I felt like tossing my controller across the room, the soundtrack seemed to crescendo along with the difficulty, inviting me to try again. And again. And again. 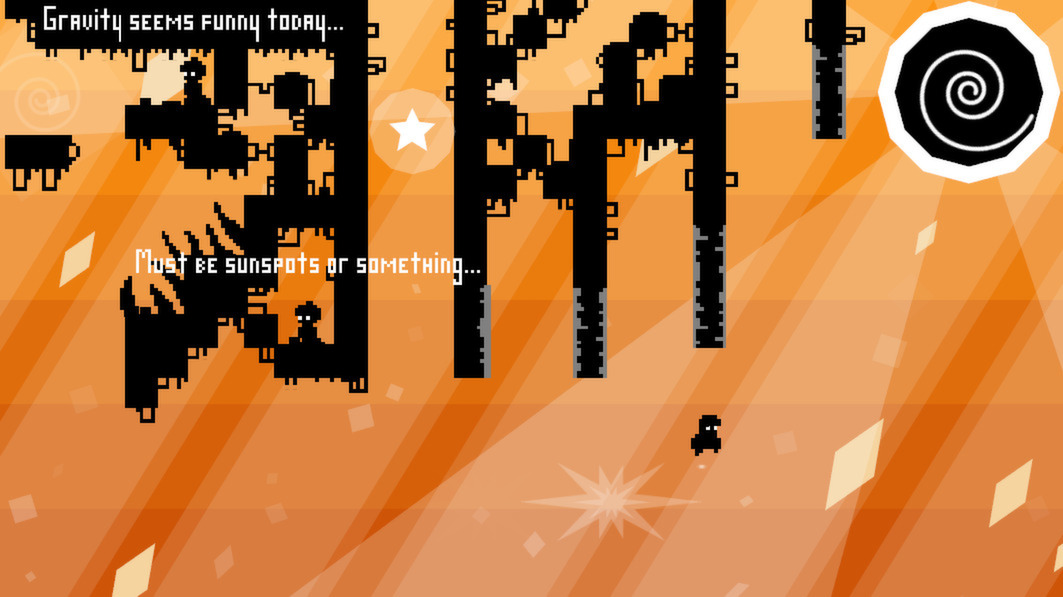 Electronic Super Joy is a pure gameplay experience. Superfluities are stripped away, leaving behind a raw platformer. Our protagonist runs, jumps, and… Well, that’s about it. It’s more about rolling with the punches and keeping up with a continually evolving set of rules than anything else.

A series of linear obstacle courses, the five-plus-hour campaign is punctuated with a multitude of hazards ranging from familiar genre standbys like pitfalls and patrolling enemies to more insidious machinations such as spinning laserbeams and missile barrages. It starts off simply enough, but wrenches are tossed into the cogs soon enough. New mechanics are introduced just as everything becomes relatively comfortable, forcing the player to adapt as the gameplay regularly turns on its head.

There are a collection of rotating special moves that serve to enhance the environmental diversity. Our hero acquires various abilities throughout the journey that correspond to particular levels, allowing the designers to play with new ideas and steadily breathe new life into the experience. 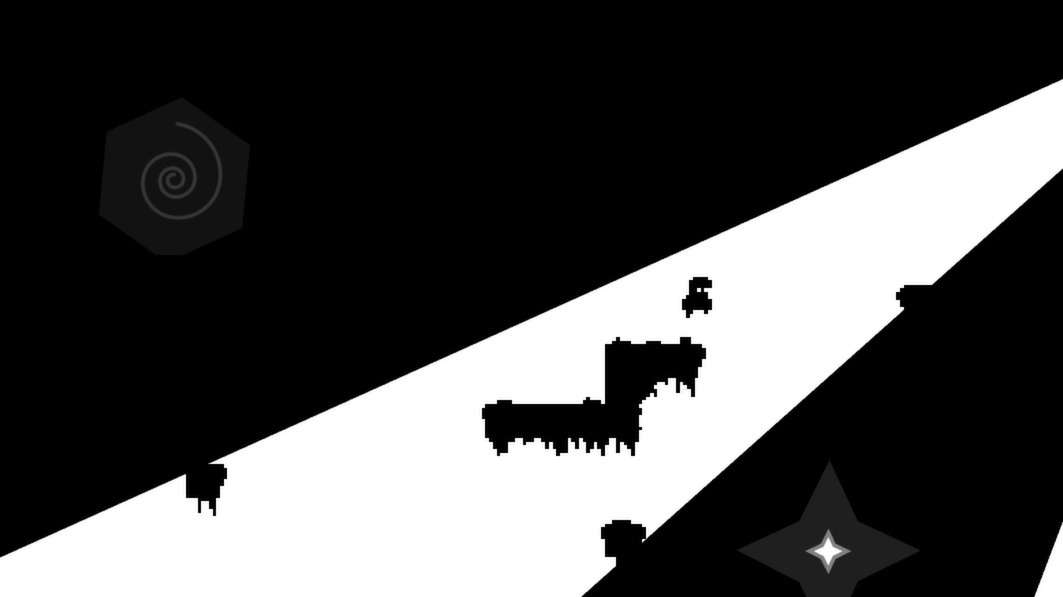 Despite its ostensibly traditionalist sensibilities, the game is surprisingly refreshing in many respects. There’s a great deal of heart and soul shaded between the bright colors and pixel graphics, making it so much more than yet another retro-inspired platformer.

A large part of that is the humor. There’s an air of levity threaded throughout the experience. Checkpoints emit sexual moans and groans that will likely catch players off guard at first, but eventually seem perfectly fitting astride the flashy atmosphere.

Foul-mouthed characters strewn throughout the campaign lend the title personality, particularly in the shoot-’em-up showdown with the Pope or whilst fleeing from a towering monster that bears a striking resemblance to Godzilla. There’s so many bizarre and wonderful little moments tossed in along the way that make the game such a joy to play. 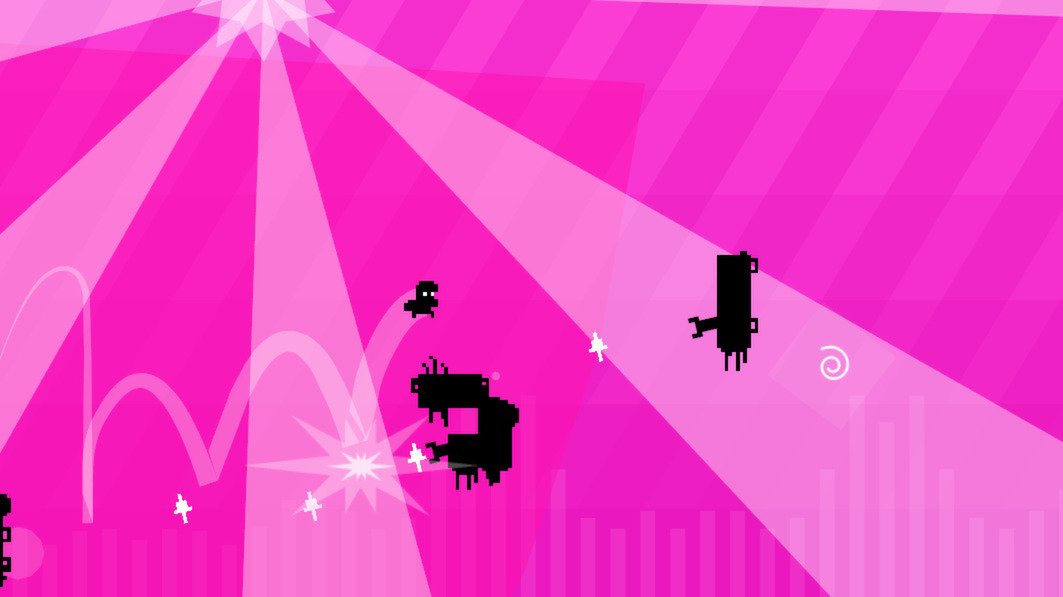 It’s not all great though. Electronic Super Joy occasionally suffers from some troublesome slowdown that, in one particular instance, nearly obstructed my progress through the campaign. It was a relatively brief hindrance in a resoundingly well constructed product, but it was enough to leave an indelible impression of game-induced frustration on an experience where any fault is otherwise placed squarely on the shoulders of the player.

That said, it’s difficult to levy complaints against Michael Todd Games. This is masterfully crafted sensory experience. Visually stunning, hilarious, and brutally challenging, Electronic Super Joy is a delightful and charming musical platformer that will ensnare your heart.