The first fifteen minutes of most games give you a good idea of everything that lies ahead. After going through the first two hours of Harvey’s New Eyes, I got the gist of what things were to come. So, this is basically some awkward throwback to ’90s E-rated adventure games. At this point, I was tearing my eyes out at the game’s painful sense of humor and terrible voice acting. I actually sent an email to my editor, pleading to take me off this review. Then, I played some more.

By the end of chapter one, it suddenly becomes apparent that Harvey’s New Eyes winning “Best Youth Game” at the German Computer Games Awards isn’t disagreeable — no, it’s a criminal act against children everywhere. This isn’t a comment on quality but on content, specifically the hard left turn that drives the game far away from child friendly territory.

If this is a game for kids, then Germany has some issues it needs to work out ASAP. 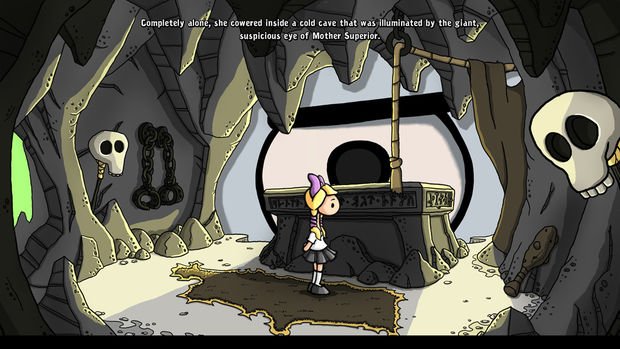 Usually, I’d reserve the bottom line to, well, the bottom line, but due to spoilers I’m going to drop that information right here: Harvey’s New Eyes is a mostly competent adventure with some novel narrative and mechanic ideas that don’t quite come together. It’s worth seeking out, if you are hurting for a new adventure game and can’t wait for Chaos in Deponia. If this speaks to you, buy it and don’t read this review. Seriously, DON’T READ THIS REVIEW!

I try to avoid spoilers in most, if not all, my reviews but I feel doing that in this review would be a disservice to both the game and readership. To put it simply, there isn’t another game that takes quite as drastic a turn as HNE. It is the Audition of videogames: It either plays on your expectations or your friends spoil the whole thing for you. Assuming you have no interest in purchasing, let me be that friend for you.

OK, no spoilers just yet. Let’s start with what the game wants you to think it is rather than what it turns out to be. After a lengthy, self-indulgent opening credits sequence, HNE introduces the player to Lili, the game’s silent protagonist. She’s a do-gooder sequestered to a convent run by an abusive nun, who tells Lili that she “isn’t even fit to rake leaves.” Soon an evil doctor, who made an appearance in Edna & Harvey: The Breakout, is introduced — and, no, it is not necessary to play the first game before jumping into HNE.

Of HNE’s three chapters, the first contains both its best and worst moments. This is because you’ll deal with the pedestrian conversations with some dull, cliche characters. Here’s your typical mean bully, ditzy blond girl, etc. Once the plot twist happens, it’s cathartic to see what becomes of them. All of a sudden, dismantling a WWII bomb and dropping a beehive on a student are the least of Lili’s misdeeds. Once the imaginary gnomes show up, shit gets real. You must be thinking, “Oh man! Imaginary gnomes? Now, I need to play this game!” — but hold on a second.

The main issue with HNE is that it’s just not very good — don’t worry there is a BUT coming up. The voice acting is atrocious — and this comes from someone that thought Deponia’s was not bad — the sound effects are the definition of budget, animation is next to non-existent, character design is crude, the puzzle explanations are muddled, the dialogue is uninspired, and the environments lack the interactivity I expect from an adventure game BUT — there you go! — the story is one almost worth seeing for yourself due to the sheer lunacy of it. 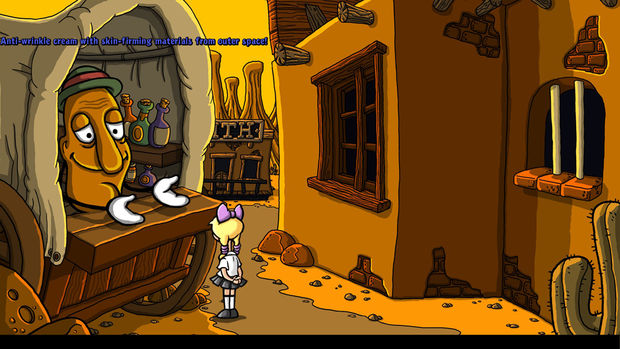 Once Lili crosses-over into a psychedelic otherworld to purchase deodorant from what looks like a giant pickle, it’s hard to recall where the story even started. Unfortunately, the story’s bizarre ideas don’t ever really come together. Nowhere is this more apparent then in the limp finale that just kind of cuts things off, regardless of which of the three endings you receive.

Some new mechanics are introduced alongside the dark humor at the end of chapter one. Lili isn’t only suppressed by a nun, she has also been brainwashed by an evil doctor! In order to get past these mental restrictions, she must unlock certain acts of rebellion by diving deep into her psyche. Throughout the game, you’ll need to equip certain restrictions in order to solve puzzles. This is more of a test in patience than a novel mental exercise. The very annoying narrator will tell you what you should have done. In case he doesn’t, there is a rabbit doll that will scold you for choosing the wrong one. Having to see the rabbit slowly walk over and away made me want to throw my keyboard at times. Clearly, I’m no Lili.

So much of what makes the game a repugnant mess in the opening soon makes sense by the end of chapter one, but many problems introduced at the start never fade away. From aesthetics to mechanics, there aren’t many nice things I can say about HNE that don’t have to do with the story. OK, here’s two: The backgrounds are wonderfully drawn, even if they are stagnant, and the game’s soundtrack is one of the best released this year. I’m still undecided if ending the game with a strategy-RPG sequence is a good or bad thing. If nothing else, it certainly fits the game’s direction of having no real direction. 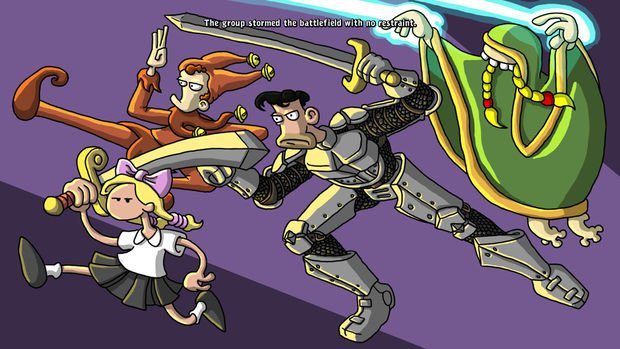 There is certainly room for a game that falsely advertises what it is during its opening hours. I wish more games were bold enough to play upon expectations. I also wish that HNE’s big narrative twist came with a sudden layer of polish and craft. Unfortunately, these things are sorely missing throughout.

If you identify yourself as both a big fan of adventure games and a very patient player, it may be worth diving into Harvey’s New Eyes‘ sick, twisted world.