Dynasty Warriors 8 takes place in the far future, where three rival cyberpunk gangs duke it out on the streets of Neo New York, armed to the teeth with laser fingers, eye-whips, and guns that shoot acidic screaming skull bullets.

That’s a lie, actually. Once again, it’s about Chinese kingdoms fighting for control of China.

There’s only so many ways you can explain the unchanging premise of Dynasty Warriors before you start just making stuff up out of boredom.  This is not to say that Dynasty Warriors 8, for all its familiar foundations, is boring in any way. On the contrary, to the seasoned fan who simply cannot get enough hack n’ slash silliness, this may indeed be the best installment in the series. After a recent run of mostly disappointing games, this eighth main chapter is more than a return to form. It’s the new gold standard. 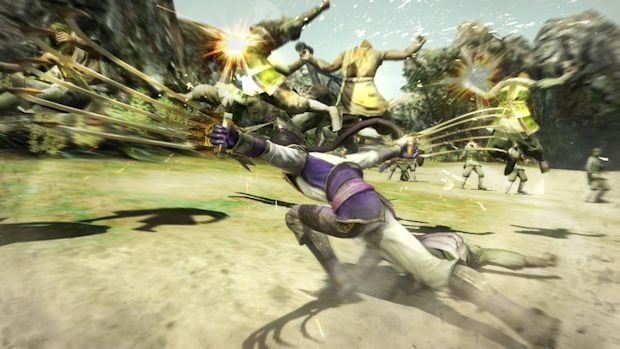 Unlike most main numbered sequels, Dynasty Warriors 8 is not a complete overhaul of the roster. The voice actors of 7, as well as general character designs and many movesets, are the same. However, the system itself has been dramatically upgraded, with a slew of new features as well as elements cultivated from the very best of the series. The result is a game of new ideas, built on a foundation of classic ones, and it’s a terrific thing to behold.

The most important thing to note is that Dynasty Warriors 7‘s biggest complaint, the abundance of recycled weapons and shared movesets among characters, is no more. Whereas in the past, up to three characters could play almost identically, there are absolutely zero clones among the cast of over seventy playable heroes. Each weapon — and there are tons — is distinctly different, and every character has his or her own unique “EX” weapon.

Weapon switching returns from the last game, allowing characters to take two weapons into battle. One weapon, the EX weapon, is that character’s favored armament, granting them attack bonuses and special moves, and players are free to mix and match EX weapons with any other gear from any other character. Every warrior can be leveled up separately, gaining experience in battle, while killing enemy officers under unique conditions unlocks (and powers up) equippable skills that add extra stat bonuses.

New to the series, and absolutely welcome in its addition, is Weapon Affinity. Each weapon acquired in the game comes with one of three Affinities — Heaven, Earth, or Man. In a style similar to Rock, Paper, Scissors, each Affinity is strong against one and weak against the other (Heaven beats Man, Man beats Earth, Earth beats Heaven). In battle, Affinities come into play by putting players at a disadvantage or advantage depending on the enemy’s weapon type.

If an opposing officer has the winning Affinity, you’ll do less damage and be unable to stagger them. However, you can time a weapon switch to perform a swanky counterattack and gain temporary stat boosts. If you have the superior weapon, enemies have a blue shield icon that can be dismantled with successive blows. Once drained, players will automatically perform a lightning combo of unstoppable attacks. Using both these Switch Combo and Storm Rush moves, as well as choosing dual weapons that compliment each other, lends a fresh flair of tactical depth to the game that, while simple in concept, significantly changes up the flow of combat for the better — especially on higher difficulties, where enemies can attack in varied Affinity groups and aren’t shy about using their own counters or combos. 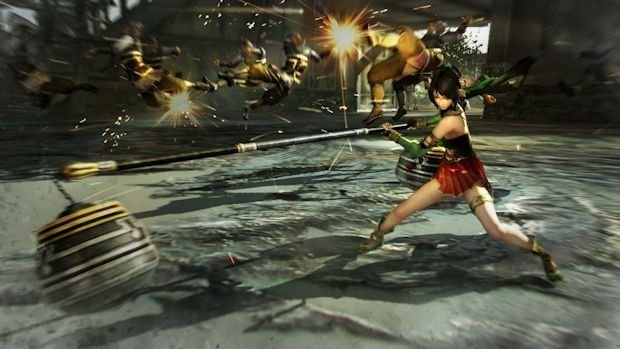 Each officer now has three special Musou attacks, of which you can perform one invincible, gauge-fueled attack from the ground, one from the air, and one by holding down two buttons as opposed to one. Additionally, there’s a new Rampage gauge which, when filled, allows the player to become faster, stronger, and nigh invulnerable for a moment, as well as unleash an ultimate Musou that chains together attacks in a fashion similar to old school Musou moves from early installments.

Story mode comprises four main campaigns for the kingdoms of Wei, Wu, Shu, and Jin, as well as one-shot stages for each of the unaligned characters. In a campaign, players can choose one of three characters per stage, playing through a timeline roughly based on the Three Kingdoms period of Chinese history. Secret objectives in certain story levels can open up “What If” scenarios, which will change the campaign, making certain officers playable in more levels, enemies appear in new stages, or even unlock new chapters entirely. Each of the four main stories will take a few hours to beat, and even then, it’s likely you won’t have unlocked everything.

One huge bit of good news is that Free Mode is finally back, allowing you to replay any stage for more loot drops and experience. You can also play on either side of a battle again, adding even more playability to the maps. There is also Ambition Mode, loosely based on the series’ last Xtreme Legends expansion. In Ambition, you’ll be fighting battles to earn resources and build up a city to impress the Emperor. The more successive battles one fights, the more rewards can be reaped, but healing is limited and fights get very tough very swiftly. Random encounters and unique surprises litter Ambition Mode for those who risk it, and it’ll likely take a good long while to see absolutely everything. 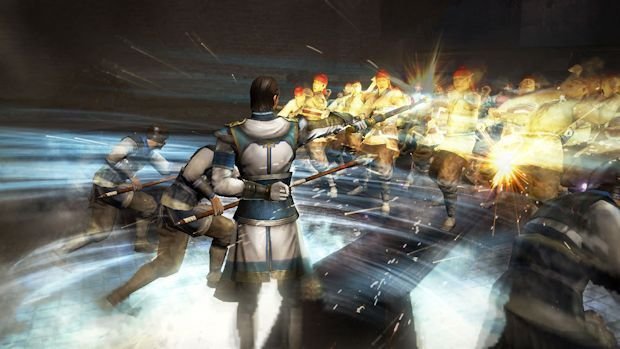 Really, though, it’s the little touches that make Dynasty Warriors 8 one of the most comprehensive and entertaining installments in the series. Calling a horse with a shoulder button and keeping the button held to instantly mount it sounds pointless to an outsider, but an experienced player sick of manually clambering onto animals will find it a revelation. Rare animal loot drops unlock cool beast companions, unique 5th level weapons can be obtained by performing specific tasks with designated characters, and all sorts of powerful items can be nabbed by playing stages on higher difficulties — which do enough damage to even high level characters to truly be considered challenging again. And of course, there’s local and online co-op, as well as online rankings for egotistical players.

As much as I’d love to have nothing but praise, it must be said that the more subtle character redesigns and retained voice cast takes away from the sense of overhaul that normally comes with a main numbered Dynasty Warriors release. While each character has new moves and unlockables, a good number of them are very familiar to a player of the last game, which is a bit of a shame. Characters themselves could also do with changing up their one-dimensional character traits as well, as hearing Liu Bei prattle on about benevolence, or other characters taking the one word they found in a dictionary and basing all their dialog on it, can grate a little. Oh, and the writers should be informed there are other words that can be used to describe a war than “Chaos.” I’ve heard enough of that word. 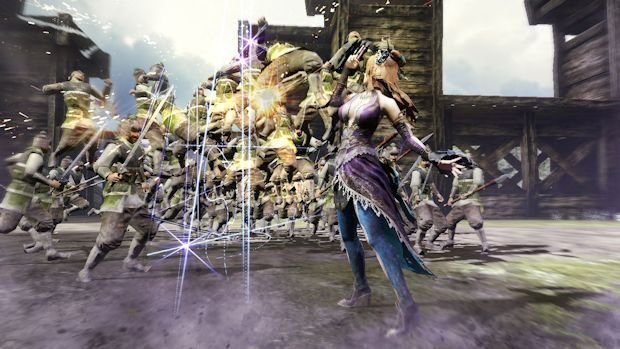 Of course, there’s a stable of fresh new officers joining familiar faces to keep things more interesting. The Wei faction gets Li Dian and Yue Jin, Wu gets Han Dang and Lu Su, Shu gets Zhang Bao, Guan Xing, and Guan Yingping, while Jin gets Jia Chong, Zhang Chunhua, and Wen Yang. Accompanying these characters are some of the more exotic and ludicrous weapons in the series, something which is also true of a number of de-cloned characters. Zhuge Dan’s new nightstick weapon and accompanying “police brutality” moveset is a particularly delightful example, as is Cao Cao’s fresh power to summon ghostly versions of himself that perform his classic attacks on distant foes.

The usual visual trade off between pretty graphics and dozens of on-screen enemies shows its usual faces, with simplistic environments making way for huge maps littered with cannon fodder and more dangerous officers. The series’ old enemy — slowdown in character-intensive areas — is still here, but notably rare this time around, seen only when the screen is literally drowning in moving bodies. Otherwise, it can at least be said animations are beautiful, especially when it comes to Rampage Musous and Storm Rush attacks.

The graphics are complimented by the same deliciously camp hair metal soundtrack we’ve come to know and love/hate. Sadly, there aren’t as many memorable tunes this time, though everything’s consistently cheesy and nonsensical, and a couple of standout tracks can be enjoyed. As previously mentioned the voice cast is almost entirely retained from the previous game, and it’s a decent selection of talent picked from among the more familiar actors in the industry. Basically, it’s a cast of genuinely decent actors, which may subtract from or add to your enjoyment of the game, based on how much you loved the awful B-movie dialog of older titles. 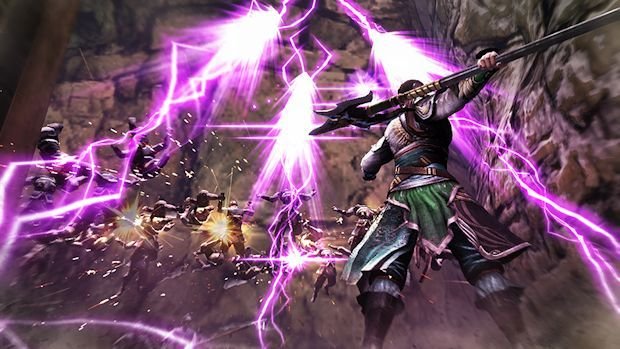 Dynasty Warriors 8 feels, in several ways, like an answer to criticisms fans have had of the series all generation. It contains more involved combat as opposed to Dynasty Warriors 6, over seventy totally unique character moves as opposed to Dynasty Warriors 7, and an overall deeper, more varied, faster paced experience than the series has ever had. The dramatic new additions to combat and three gameplay modes are all complimentary, while the more subtle enhancements alter the game’s flow in unsung ways. While there are still things that can be improved, Omega Force has reasserted itself as the best provider of hack n’ slash nonsense you’re likely to get, and provided what may indeed live up to its boast as the definitive Dynasty Warriors experience.

And Lu Bu is still a total dick.