Unable to Wu this fan

When it comes to milking a franchise, few companies are as impressive in their zeal as Tecmo Koei. This is a company that has not only released seven Dynasty Warriors games (with an eighth on the way), but managed to produce two major spin-off properties, each with their own sequels, and gets away with releasing two spin-off versions of every main installment it produces.

Each Dynasty Warriors sequel gets two followups that copy most of the assets and add a few new pieces of content — Xtreme Legends and Empires. We’ve already reviewed Xtreme Legends for the seventh installment, which introduced new characters and scenarios, but now Koei’s back with the Empires variant — a strategic take on the main game that charges players with uniting the kingdom through politics and force.

As excessive as the Dynasty Warriors releases are, fans usually find the variant spin-offs interesting enough to give them a pass. However, with Tecmo Koei seemingly averse to spending money or exerting any effort lately, its usual tactics have become less easy to overlook, a problem wholly evident in Dynasty Warriors 7: Empires. 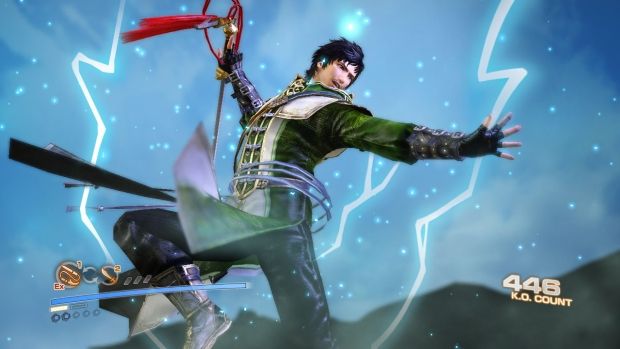 Dynasty Warriors 7: Empires, as with most Empires variants, dispenses with the established story of Three Kingdoms China and gives players freedom to conquer the realm any which way they choose. Taking on the role of either a ruler or a subject, players must slowly conquer China by taking over territory and strengthening their own forces.

In the last Empires game, it was more fun to be a vassal than a ruler, but this latest installment enhances the strategic elements to reverse the entertainment factor. While there’s not a lot of difference whichever type of character you go for, being able to make all the decisions and accrue all the reward is a lot more satisfying than simply leveling up and engaging in battle when required. It can also be quite enjoyable to level up as a lowly general, then turn on the ruler and declare independence before crushing the realm you once served.

Empires is largely turn based, with players having to choose one action per turn. Such actions may include training troops to increase their combat prowess, investing in weaponry to gain access to higher level arms, employing generals from enemy ranks, or speaking with comrades to improve character relationships. Each action costs resources (food, information, or gold) but can raise a character’s various governing traits.

A new leveling system raises players’ “Fame” attributes depending on the decisions made. A player that taxes the population or executes captured soldiers will raise the “Evil” trait, while one that diligently trains the troops will gain “Orderly” ranks. These traits govern the type of stratagems players can use in battle, as well as the success of various activities. At various points, random situations may also arise in the kingdom, with two distinct choices. For instance, a corrupt official might be soliciting bribes, and one can choose whether to punish him or get a slice of the action. Such a scenario can have an impact on one’s Kindness or Evil stats, as well as net monetary rewards.

While attempts have been made to strengthen the governing side of Empires, it’s still all about the battling in the end. Invading enemy territory involves capturing bases on a battlefield while engaging in the button mashing action we all know and love. As always, the general idea is to create a chain of allied bases between your main camp and the enemy’s, slaughtering everything along the way. When defending one’s own territory, the same rules apply, though a defending team can also win simply by surviving for a set period of time.

One new type of battle is the Skirmish. Skirmishes can be launched on any nearby territory and have simple goals — such as protect an ally or defeat a number of generals. Successful skirmishes can damage enemy territory before you try to invade it, making expansion easier. A ruler’s vassals may choose to skirmish of their own free will, reducing the need for a personal attack and letting one go straight to the invasion. 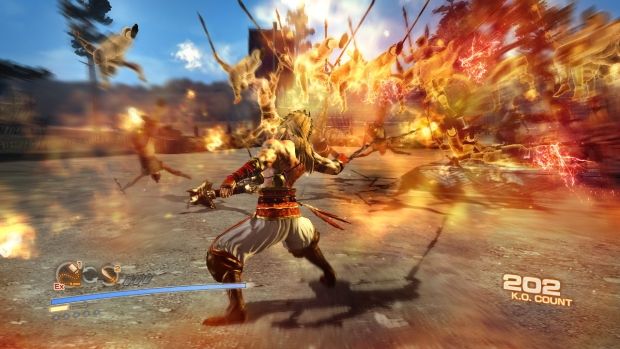 Players equip those aforementioned stratagems to use once per battle, and doing so will have a variety of useful effects. Using stratagems, allies (and enemies) can summon elite units, reduce a base’s strength by setting fire to it, turn bases into treasuries that net extra post-battle rewards, or even make a panda appear on the battlefield. The increased emphasis on using these tactics helps make this particular Empires stand out a little more, and the more advanced tricks are not without their entertainment value.

By popular demand, Create-A-Warrior has returned, allowing players to craft their own characters. CAW has been expanded by quite a bit, with a lot more costume pieces to use and greater freedom in manipulating facial features. As well as weapons and movesets, players can supply created characters with two musou attacks picked from any of the existing ones, regardless of general moveset. Though one can make some imposing or hilarious warriors, the system is still generally simplistic and not one I found too enthralling, outside of the token attempt to make an apparition of inhumanity and call it Chungus.

Dynasty Warriors 7: Empires is a solid enough experience, but it also feels lazy — even by its own series’ standards. I have no idea what’s going on which Tecmo Koei right now, but they’ve been cutting corners a lot lately, and Empires is no exception. Like other recent Warriors-related releases, there is only a Japanese language track, something some fans may appreciate, but is coming off to me as increasingly cheap and miserly. The main issue stems from the fact that, like other Warriors games, Empires can be a chaotic experience, and there’s simply no real opportunity to stop and read subtitles while the fighting’s at it’s fiercest. With allies and enemies shouting at each other in Japanese, I find myself losing track of what’s going on, and subsequently feel far less involved in the battle. 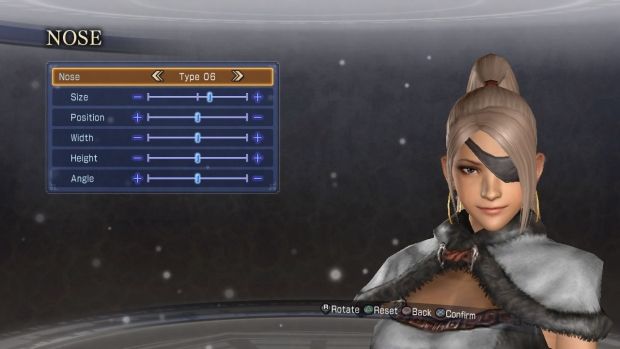 Another galling fact is that Empires retains many of the movesets of Dynasty Warriors 7, not the improved versions found in Warriors Orochi 3. This means a lot more cloned characters and less variety in gameplay overall. Whereas in Warriors Orochi 3, generals like Cao Cao and Sun Quan had different movesets despite using the same weapons, Empires goes back to having half a dozen sword users all behave the same way. Thankfully, some of the characters get to use their DLC weapons, and there’s one new character in Xu Shu, which reduces the repetition a little, but the net result is still quite egregious.

There’s really just not much content on the table, certainly not enough to justify a purchase for those who already have one of the other three releases that use gameplay and assets from DW7. Once you’ve conquered China, there’s not a lot else to do but conquer it again, a process that becomes quite dull once you’ve reached the halfway point of any campaign and are so strong you just need to keep rolling into territories, claiming them, and moving on. 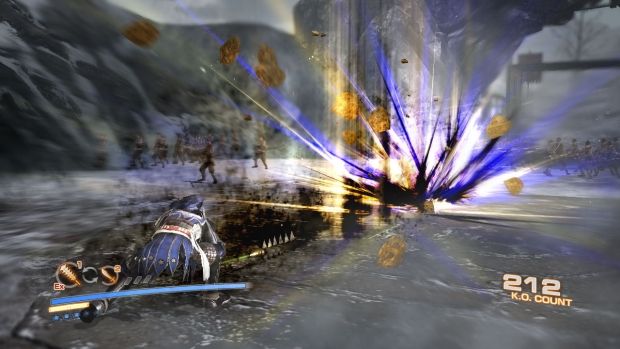 The Empires series is generally considered the best type of Dynasty Warriors spin-off, but with Koei’s latest efforts smacking of no effort at all, this particular release comes across as unnecessary and pointless, especially with Dynasty Warriors 8 already out in Japan and inevitably preparing for a Western launch in a matter of months. This is still a decent enough game if you literally cannot get your fill of Warriors games, but for this lifelong fan of the series, Koei’s been delivering too much of too little for a while now, and I’m about at the end of my tether.

The general series admirer would be best advised to skip this and just hope Dynasty Warriors 8 is where all the missing energy has been going.