A lot has been said and written about games being art in the last decade. Some games can elicit different emotions. Sometimes they aim to be interactive drama. And sometimes they are meant as a metaphorical reflection on a state of being, or even questions about life itself.

I didn’t expect Dungeon Defenders of all games to make me ponder one of life’s most poignant and eternal questions: “Am I really a Cenobite?” 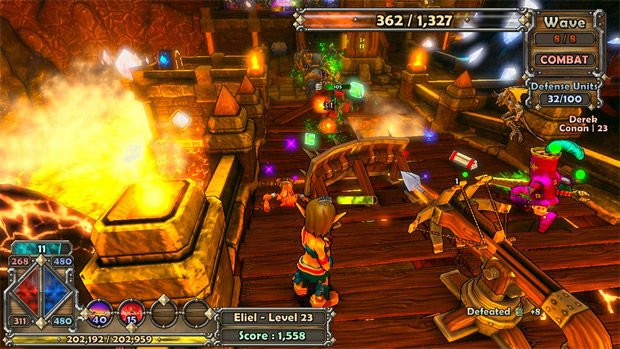 Let me elaborate on that for a moment. Dungeon Defenders can be insanely hard. That is, if you are mad enough to attempt playing it on even the medium (default) difficulty all by yourself. As an action/roleplaying game/tower defense hybrid, Dungeon Defenders is all about managing waves of incoming hordes with an upgradable character who sometimes has to defend multiple Eternia Crystals — the game’s “cores” if you will — usually leaving you with one too many paths to juggle.

If you don’t have anyone to play with, or if you don’t want to bother with random people online, you can probably make it through the game’s 13 campaign missions by yourself on the easy difficulty, and only then attempt it on a higher difficulty with your upgraded gear and character. Yet even on this “easy difficulty” the game is quite challenging regardless of whether or not you are a veteran tower defense player.

In fact, I would go as far as to say you would need to be either a masochist, or indeed a Cenobite, to buy Dungeon Defenders if your sole purpose is to play solo. Naturally, being an idiot masochist, I jumped into this game choosing an advanced hero class and started playing it on its medium difficulty in singleplayer, because hey, I have played a videogame before! Suffice it to say, it taught me new sensations of pain I wasn’t aware I could feel.

With that out of the way, it has to be said that this is a game created for 2-4 player co-op bliss (online, locally, or taking a local party online), and boy is it one for the ages. 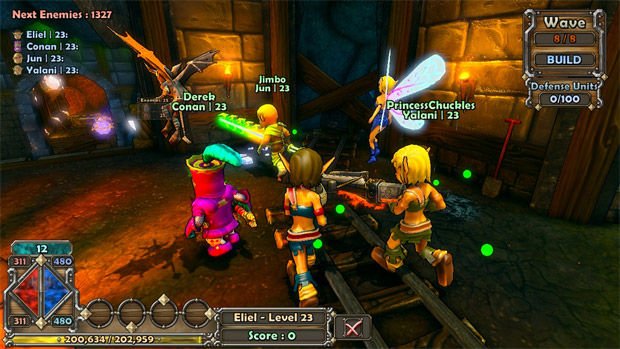 Dungeon Defenders offers a choice of four classes that are progressively more challenging to learn and use effectively. The Apprentice is the most traditional class, with his barricades and different kinds of towers to deal ranged damage from behind protection. The Squire can block off paths himself by blocking, or build blockades and towers aimed at funneling and then destroying groups of enemies.

The Huntress is a mix of ranged support and harassment, wielding different types of crossbows (or gatling guns) and an arrangement of traps to damage and stun incoming waves. She is a bit harder to use as these traps initially have a low detonation count until you level up a bit, which results in having to repair them in the heat of battle lest they lose all their detonation counters, thus forcing you to buy a new trap for full price. The Monk — of the Aang variety — is the priest type of class who can lay down auras to slow, damage or turn enemies against each other, as well as summon healing auras. Like the Huntress, the Monk is more of a co-op support class than the kind of class you’d want to wield solo.

When you throw them all together, you have the Apprentice to build towers, the Squire to hold off a narrow path, the Huntress to stealthily lay down traps and harass enemies, and the Monk to support and manage dealing with the enemy wave’s paths of impending doom. Each class also has a few special abilities to help them out in battle, besides the five unique defenses they can summon. 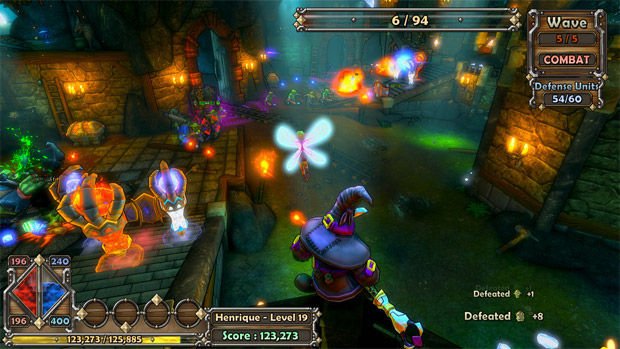 Buying a tower, aura or trap costs mana, which can be harvested by collecting the mana crystals that enemies drop or looting preset chests across the map that respawn after every wave. Upgrading a defensive position costs 100 mana initially, regardless of how much it cost to build it in the first place, and upgrading it even further doubles the cost until it’s no longer cost-efficient to do so. Between each wave you have a Build Phase to strategize and communicate your approach to the next wave at your leisure. While you can build, repair, and upgrade towers when a wave is assaulting your positions, your hero will do so at a far slower pace than during the Build Phase; hence the name.

What this comes down to is going from a planning phase to make sure everyone’s resources are used in the best way possible and everyone is covering the right approach to make the most of their class’s strengths, followed by a hectic cooperative battle for survival as something, somewhere, is bound to go wrong at some point. In the meantime, each player will be hunting for precious mana, to put back into tightening the defenses, and for the glorious loot of which there is a copious amount.

Whatever loot you don’t want, you can either store in an inventory that is shared between all your characters, trade with friends, or sell for mana in a mana bank (your currency) that is, again, shared to keep cross-hero management as painless as possible. A Tavern serves as a lobby, where you choose what you want to play and tinker with your inventory at the Tavernkeep. Here you can sell off your loot — which you can also do during a mission’s Build Phase if you want to — or spend hard earned mana on XP bonuses, character respecs, renaming your hero, or buying rare and randomized weapons and armor. Did I mention you can buy a pet that deals damage and buffs you stats? PETS! 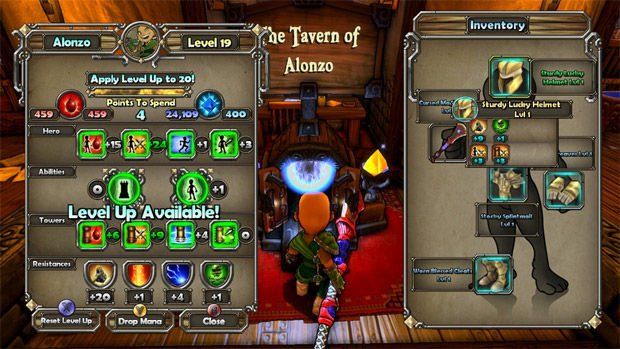 As if it wasn’t enough to have all your prior tower defense experience reduced to nothing if you attempt playing the game solo on a difficulty above your station, a glance at Dungeon Defenders‘ achievements & trophies makes it clear: Trendy Entertainment isn’t about to make it easy for anyone.

The game is very hard, sure, but it provides a pleasurable pain. Every failure is a chance to learn and try again with a slightly beefed up character than the last time. With four classes and four difficulties to choose from, the campaign alone offers countless hours of entertainment. Each campaign level can also be played in Survival mode or Pure Strategy mode, the latter of which forces you to depend on your defenses alone.

Since that was apparently not enough for Trendy Entertainment, each campaign level you complete unlocks a unique challenge level. In these challenges you’ll play a variation on the standard gameplay by attacking the monsters instead of defending, protecting a teleporting Etheria Crystal across the map, find yourself in a rain of goblins, and even crazier stuff like having one hero randomly become “the chicken” who is easily killed and can’t jump. Finally, there is a Player vs. Player challenge to pit you and your friends’ heroes in an arena style battle. 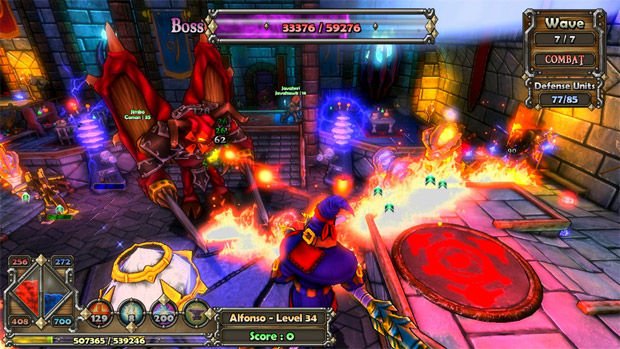 All of this content would be useless if the core gameplay wasn’t solid or fun to play, but thankfully Dungeon Defenders delivers on this front as well. There are a few minor gripes that may annoy some players, as no game is perfect. The inventory is pretty large and easy to manage, but if you forget to sell off loot during a long game session, you might fill it up. Then you have to sell off your loot during a mission just to be able to pick up the remaining loot, which can break up the pacing. The final mission in the campaign ends in a cutscene before you can pick up all the loot from the last wave, which is a bit annoying since you could do that in every other mission before choosing to move on to the next one.

Dungeon Defenders also has a lot of features that are only ever explained during loading screen tips and the only explanation of anything can be found in a single tutorial video. It could have done with a dedicated help section in the menu, where you could find which mission modifier means what, how stats affect your hero’s performance, how a level score is calculated, or even just to get an overview of the different defenses and abilities each hero has before you choose one. The tutorial video in itself does a decent job explaining the basics, but it is a bit barren overall given the huge amount of content, class abilities, defenses, and modes the game throws at you.

Then there is the matter of singleplayer, which was mentioned earlier. If you are going to play some singleplayer — whether you lack friends to play with or just want to grind a bit while they are unavailable — just start the game on Easy with an Apprentice or Squire class. After a run-through on that difficulty, you’ll be in a much better position to deal with the game’s Medium difficulty, which has a nasty habit of throwing overwhelmingly powerful waves at you at the very last moment. Everything you can do in solo mode is really meant to help you develop your character for co-op, and despite seemingly not really being designed as singleplayer game, you can still get hours of enjoyment out of the campaign levels and even the Survival and Pure Strategy modifiers — as long as you don’t jump in head over heels.

The challenges are a different matter. These are primarily made for co-op play with relatively high level characters, and they are insanely hard to complete on your own. You can switch between your created heroes during the Build Phase in any type of level to make up for the lack of defense variety, but it’s a last resort that doesn’t quite offer a good argument for going solo. You would need to create and level up four different heroes with a lot of grinding just to make proper use of the system. 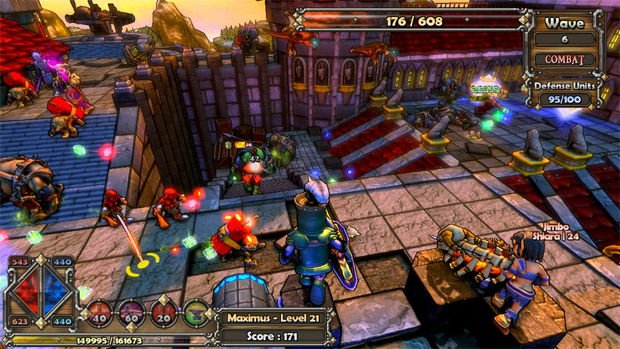 Whatever issues Dungeon Defenders may have are minor, however, and lay with the singleplayer component of a game designed to be played cooperatively. It will detract as much from the total experience as being able to play Left 4 Dead with AI bots detracts from the multiplayer fun you can have with that game. Dungeon Defenders is filled to the brim with deliciously challenging co-op content and so much variety and loot that you could keep playing it for dozens upon dozens of hours. It takes the leveling and loot addiction from Diablo and Torchlight, throws it into the “tower defense variant” format that has become so popular, and succeeds at all levels.

Dungeon Defenders doesn’t just deliver in offering a huge package of cooperative fun, but raises the bar for downloadable titles by offering more than the average full-priced retail title does these days. It strikes a balance between action, RPG, and tower defense in a way that turns it into the Castle Crashers of tower defense. It will keep you occupied for weeks and months to come, provided you have the local or online friends to play with.

If you don’t, you can always decide that yes, you are a Cenobite and by the gods that cannot hear you, you will finish that campaign on Insane difficulty all by yourself with your four level 70 heroes. Dungeon Defenders is really meant to be played with three friends to raise hell with, though, and you will still come to know the true meaning of pain well before you beat it on the highest difficulty.