“How do you even review Dreams?”

It’s a question I’ve asked, and been asked. Even now, as I try to stall so the right words might spill out of my subconscious and capture some of its playful magic, I’m grappling with possible answers. It’s such a wide-ranging artistic experience. What we get out of it will drastically differ from person to person.

You might flex your creative muscles in animation, a discipline I’m convinced I’ll never excel at, much less wrap my head around. I’m far more likely to stick with something in my comfort zone, like sculpting. Or I could wake up one day and decide “Hey, painting would be a pleasant change of pace.” Your old buddy you never talk to anymore but always see online may very well be a secret music-making wizard.

The art-creating possibilities feel endless, but not in an overwhelming way. If there’s one lesson Media Molecule wants us all to latch onto, it’s that we’re more capable than we give ourselves credit. 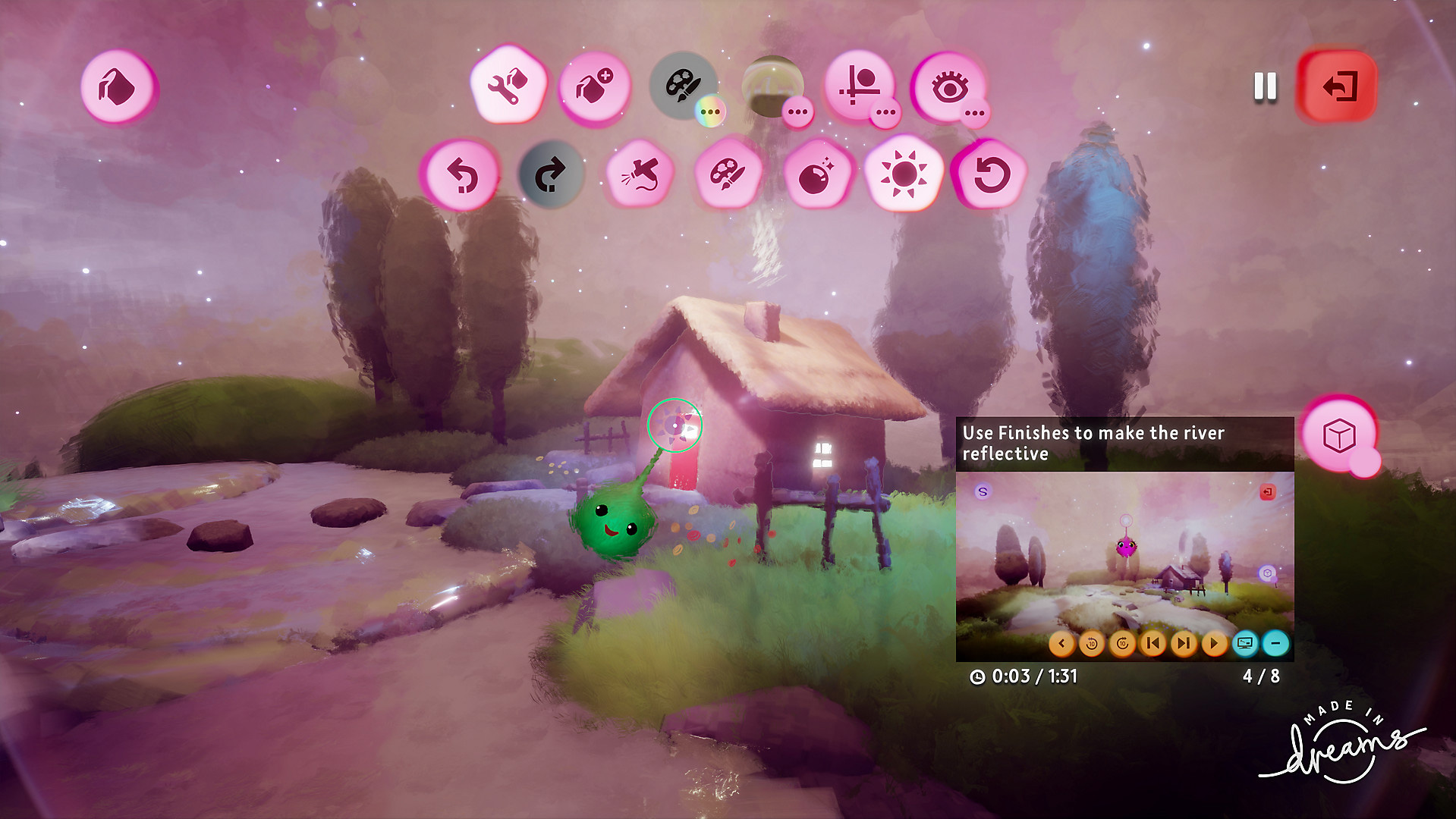 It’s easy to look at Dreams from afar and wave it off because you don’t feel imaginative enough – especially when you see the kinds of user-made games that rise to the top of the recommendation engine and tend to make headlines. Dreams players are already an ingenious bunch, and as the community figures out novel new ways to use the toolkit, the quality bar is only going to rise.

It can be intimidating at first! But any energy you invest will be repaid multiple times over.

Once you learn the ropes – how to work in a 3D space, where to find that one crucial UI element, which shortcuts are life-savers – you’ll discover the beauty of Dreams: that it’s not that tough or time-consuming to create cool things. Media Molecule worked hard for years and years so we don’t have to.

I can’t say enough about the tutorials, which take the form of narrated hands-on lessons. While you build, you’ll see exactly what you need to do in a side-by-side video player, and it’s a cinch to rewind if you missed a detail or aren’t quite getting it. Video game tutorials are often boring and restrictive, but Dreams‘ are full of personality and provide enough breathing room for you to experiment and deviate.

The masterclasses, in particular, are a treat. They’re long-form videos hosted by Media Molecule staff that show how the developers create from scratch. Not only will you pick up tips, tricks, and insights that’ll benefit your own creations, you’ll also get a sense of their individual personalities and design philosophies as they talk through their decision-making. Every inch of Dreams feels human.

When it comes to control options, I’ve had the best success with a PlayStation Move controller in each hand – that setup feels the most fluid, by far – but I also like using a DualShock 4 just fine. The default scheme relies heavily on the gamepad’s motion sensor, which dictates your cursor movement and works in conjunction with the analog sticks. In situations that call for precision (like drawing a perfectly straight line), there’s a third control option that only uses the dual sticks. It’s painless to swap around.

The best part: there’s a toy-like visual language to the menus that spans the whole suite. You won’t feel like you have to pick one area of expertise and stick with it. The creation side of Dreams is designed in such a way that you’ll naturally flow from one discipline to another and back again. A huge part of my learning came from tinkering in menus – poking and prodding sliders to see immediate changes.

It’s a marvel how enjoyable it is to just make stuff. That’s Dreams‘ greatest strength. The toolkit is powerful, and if you want to dive into the minutia to make the most of it, you totally can – but you don’t have to. I don’t know the first thing about music or sound design, but in Dreams, I can load up a pre-made virtual instrument, “perform” with basic button presses, add effects, and apply nitty-gritty adjustments on a timeline. That’s one possible way to make one type of content in this massive toolkit. 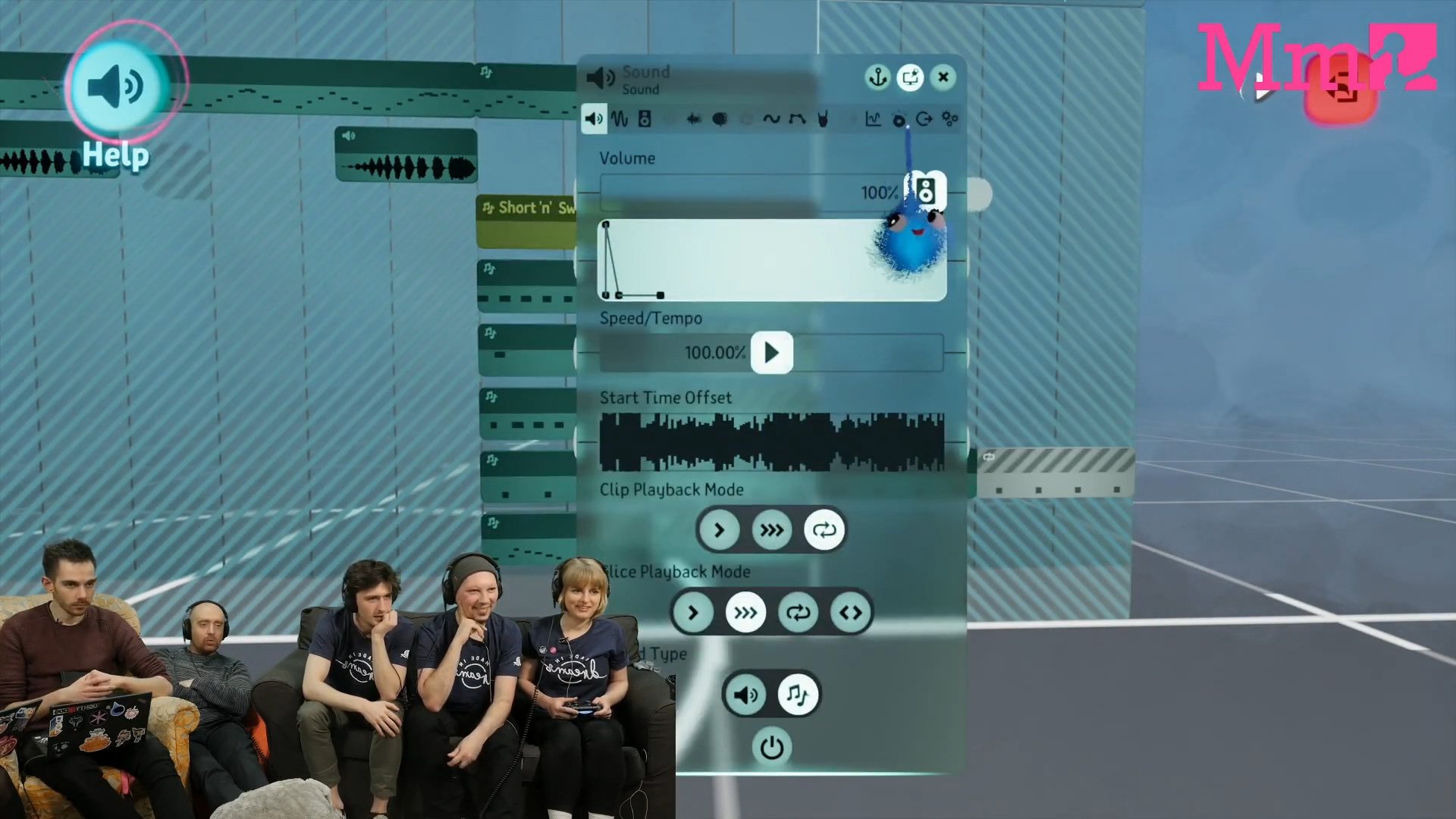 You don’t have to aspire to design a fully-realized game. Heck, you don’t have to make anything at all. The other side of the coin is the Dreamiverse – the shared online hub connecting everyone’s creations.

Loading up a random game, song, sculpture, painting, scene, or movie is as simple as tapping whichever thumbnail catches your eye. In a matter of seconds, you’re transported to somebody else’s creation, all of which – even the official Media Molecule levels – were designed with the same tools you’re using. If you want to back out and continue browsing, that process is near-instantaneous. It’s a helluva loop.

I also really appreciate indreams.me, the companion website. You can browse the Dreamiverse, check your feed, add games to a “Play Later” queue, and even launch games on your PS4 if it’s powered on.

Not every creation is going to be a high-effort masterpiece – let me make that clear. It’s the wild west right now, and to a certain extent, it always will be. Dreams is about expression. That said, tags, filters, and recommendations are here to calm the chaos. Worthwhile creations will find their way to you.

As someone who played during the Creators Early Access period, I’m still consistently surprised by the depth and breadth of other players’ games. There’s something for everyone and every mood. 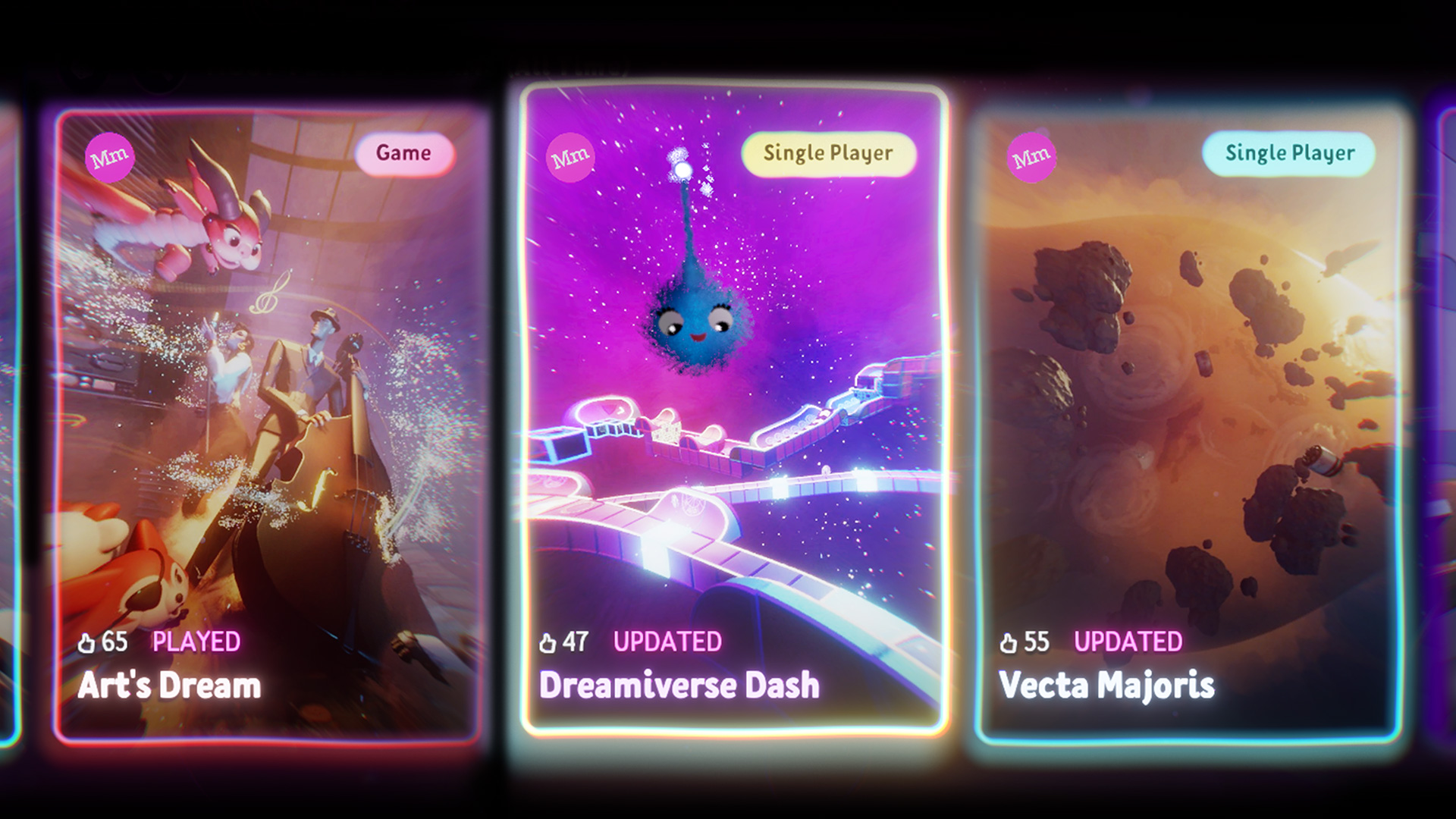 Aside from adding tutorials, trophies, remixable assets, languages, and Imp Quests (which offer small rewards for engaging with Dreams as a creator and a player), the big upgrade from the Early Access version to the final launch-day build is Art’s Dream, a multi-genre game made by Media Molecule.

I didn’t start it right away, thinking it would be neat, but not a priority. I couldn’t have been more wrong. Art’s Dream will almost certainly end up being one of the most memorable things I play in 2020. The fact that this couple-hour-long game was created in Dreams is baffling and energizing, all at once.

Art’s Dream is the embodiment of everything Dreams stands for while also telling a cohesive, charming, meaningful story. In broad terms, the game is about a doubt-filled double bassist who exiled himself from his jazz band and has to turn inward to make amends. It’s a point-and-click adventure, a musical, a side-scrolling shooter, and two types of platformers. You’ll weave in and out without realizing it.

I don’t want to say too much – you’ve got to play it for yourself – so I’ll just add this: on multiple occasions, Art’s Dream gave me that magical feeling that only video games can. It would hold up as a standalone title, but in the context of Dreams, it’s even better. It’s a testament to the toolkit’s flexibility. 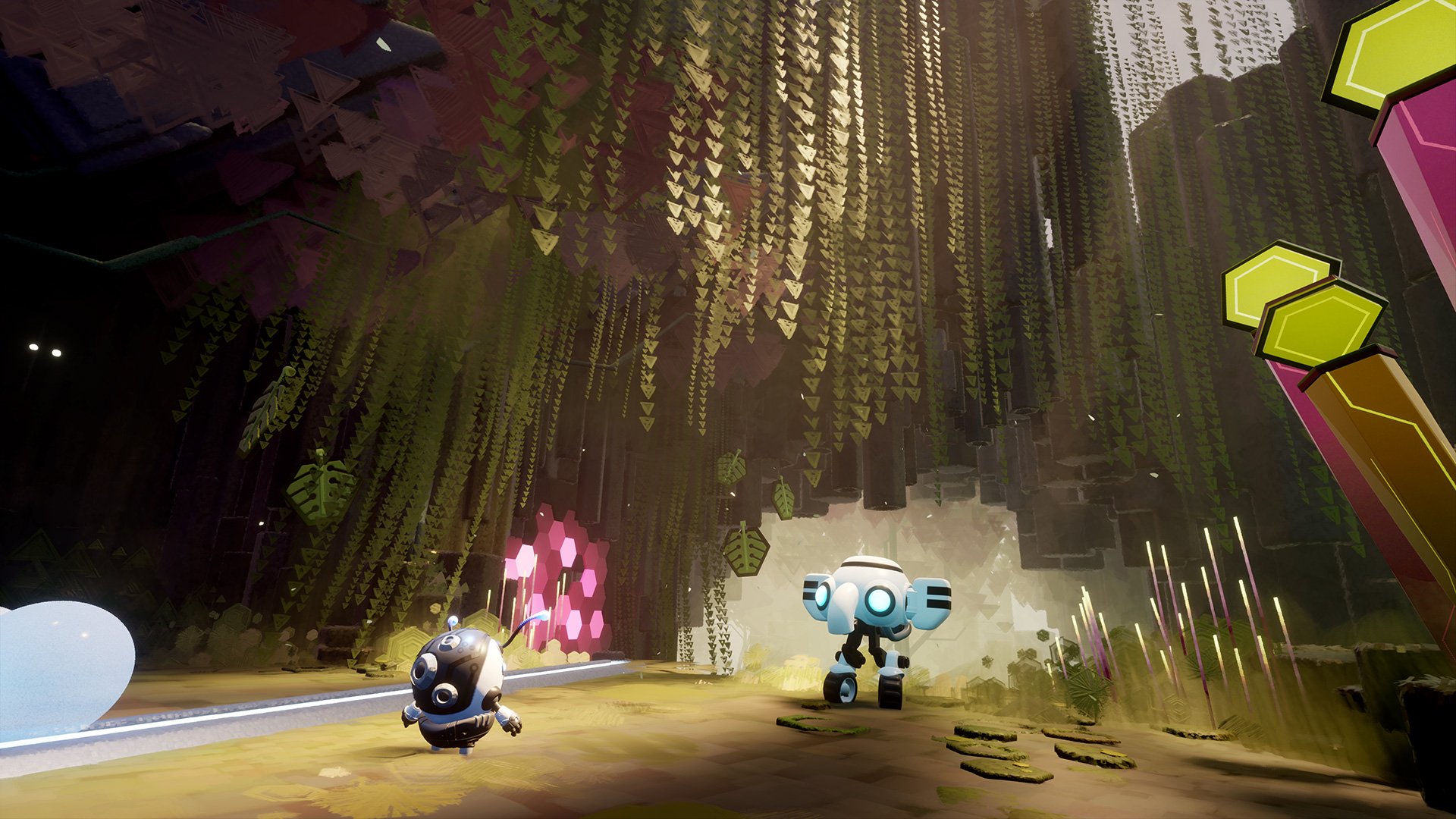 There are questions about the future of Dreams regarding the PlayStation 5, VR, content ownership, and the ability to export, to say nothing of shorter-term wishlist items. I can only speculate. What’s here right now, today, is already brilliant. It launched later than expected, but Dreams is built to last.

It should feel dull, but it doesn’t. Dreams doesn’t feel like homework. Part of that is on the intuitive tools, and part of that is on Media Molecule’s community-centric approach. This isn’t “just another project” for the team – it’s the culmination of everything they’ve worked toward since LittleBigPlanet.

I don’t think anyone but Media Molecule could have nailed Dreams. It’s truly one-of-a-kind.