The Drakengard series doesn’t often see the light of day. I had the good fortune of playing the first two games nearly a decade ago, and although they always stay in the back of my mind, it never really comes up in the conversation of games I’d like to see brought back to life.

But here we are nearly 10 years later with Drakengard 3, and I have to say, I love what Access Games has done with the formula. 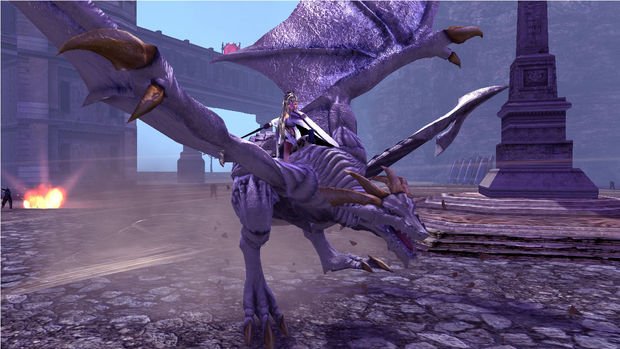 Drakengard 3 has a very odd visual motif — it’s both extremely violent, and daringly graceful in the same breath. The story is told through anime-like cutscenes with lone characters killing hundreds of minions with super-powered lightning quick moves, but like Nier, it often tugs at your heart strings and delivers real-world issues and problems in the very next scene.

It’s not just that the game looks different than everything else out there — it’s also stylish as hell, much like the Devil May Cry series. Characters stand out from one another in an instant, and the artwork and locales are absolutely beautiful to look at. The only hang-up is said visuals can cause dips in the frame rate, and it can get particularly bad with lots of enemies on-screen at a time. Thankfully, it’s always playable, despite the nuisance.

Drakengard 3 is a prequel to the first two games, and stars Zero — a being known as an “Intoner,” who descended from the heavens with incredible power. The game wastes no time getting into the thick of things, as the opening narrative informs the audience that Zero is out to murder her sisters. It’s here in the prologue that you’ll learn the basics of movement and combat, as you march towards your glorious victory against your familial rivals.

The only problem is — things end horribly for Zero. She loses her arm, is nearly killed, and her dragon companion Michael is slain. After resting for a year and completing her work on an artificial arm, she sets off with her new dragon Mikhail for revenge. Despite this simple premise, the story adds new mysteries with every turn.

The true nature of the Intoners, the personalities and histories of the sisters, and why Zero wants blood so badly are all explored, and I felt compelled to truck forward and figure it all out for myself. Mikhail also presents an interesting contrast from a narrative standpoint, as his calm, childish demeanor is often juxtaposed against Zero’s constant anger.

There’s lots of dialog here, most of it fully voiced, and it borders on drama and comedy at the drop of a hat. Most of the comedic efforts are pretty dirty, ranging from dragon urination jokes to lots of swearing or sexual innuendo. It’s not laugh out loud funny all the time, but I found myself smiling and chuckling consistently throughout. I should also add that the musical score on a whole is stupendous, and one of the best JRPG soundtracks I’ve heard in a long while.

My favorite part of Drakengard 3 however is the action system itself. It’s sort of like Dynasty Warriors in a sense, but with tighter and faster mechanics. Zero can block, jump, dash and air-dash, making her extremely versatile right out of the gate. You’ll also have the option of using power attacks by depleting your stamina gauge, which is also used for blocking — creating a risk-reward type system giving you control over your level of offense and defense.

As the story continues Zero will pick up new weapons like spears, which she can instantly swap on the fly (think Devil May Cry 3). With all of her basic tools and the swap system, you can create strings of combos that include options like aerial raves and the like, which is a ton of fun. It’s all very cool looking and very responsive, and as an action fan I found it extremely impressive considering the large emphasis on other RPG elements like leveling and equipment.

Mikhail can be called in during certain sequences, either as a helper who periodically attacks on-screen foes or as a full-on mount. The developers did a great job here of making him feel like a true companion from both a gameplay and story standpoint. Drakengard 3 isn’t really an open-world or free-roaming RPG though, as the game is segmented into missions, complete with interludes that allow you to customize your loadouts or buy new equipment and items. 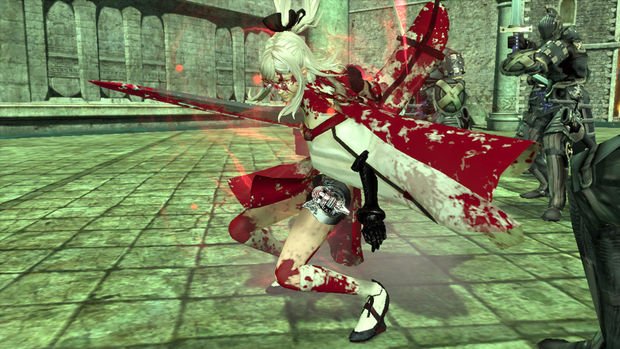 It’s not too challenging of a game all things considered, because the difficulty curve is meticulously designed to not overwhelm or frustrate players. It’s well made to the point where you won’t feel like everything is too easy, and if you really need that extra edge to overcome a certain task, you can go back and level-up with sidequests. If you want to do everything you’ll probably find yourself around a 100-hour completion rate, but the story is roughly at the 40-hour mark.

Drakengard 3 is a bit unconventional at times (like its developer) with tales of extreme hair cutting and dragon piss, but action fans will want to seek this one out immediately. Within 15 minutes I was drawn into its world and its cast of characters, and I wanted to see Zero’s journey through from start to finish. If you like games like Nier, you’ll love Drakengard 3.