I thought Jim was spot on with his review of the original Dragon’s Dogma. It had grand ideas, but in many areas, it failed to execute them, and was marred by some fairly glaring design choices. With a full sequel, Capcom could really craft something special and fix a lot of the issues the original suffered from.

For now, you’ll have to deal with Dark Arisen, an expansion and semi-update for the game that essentially uses the exact same shell of the original. To be clear, this is not the sequel you’ve been waiting for — though it is a small step in the right direction. 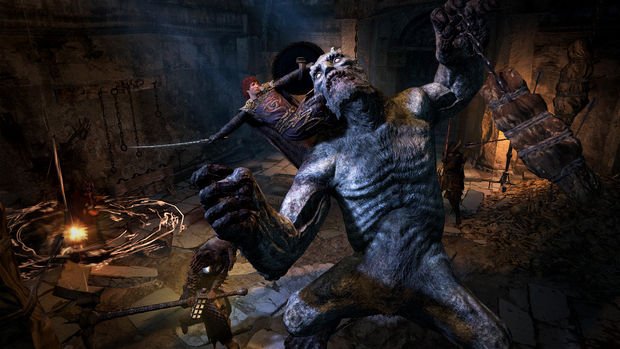 Bitterblack Isle is the main draw of Dark Arisen, as it offers up approximately 10-15 hours of new, linear content. After automatically gaining a new quest and speaking to an NPC named Olra, you’ll be on your way to Bitterblack Isle — the decidedly Demon’s/Dark Souls flavored new zone. When I say this area is linear, I mean it — you’ll basically start at the top, and head down into the depths of a single dungeon as you fight creature after creature. For people who love the game’s combat, Bitterblack Isle will most likely win you over due to the fact that it’s nonstop fighting.

New bosses will pepper the dungeon, some of which are actually new, some of which are re-skins or reworks of already existing enemies. To be blunt, Bitterblack Isle didn’t blow me away, but it was a pretty fun experience that augmented the game decently enough. Capcom channeled their inner Demon’s Souls love for Bitterblack Isle in a good way, and even if it wasn’t as imaginative as either game in the Souls series, it still did a decent job of giving off the allure of a dark and dangerous place.

The addition of the personification of Death in particular (that could show up at any moment) makes the experience even more harrowing, and despite some frustration with Pawn combat, was a neat addition to the fray. You’ll need to be level 45 to really event stand a chance with the new content (even though you can enter it at any time), and around level 70 to comfortably best it — so if you’re expecting to jump right in with your low level or non-existent character, you’ll be disappointed. After besting Bitterblack, you can go at it again with an even tougher challenge. 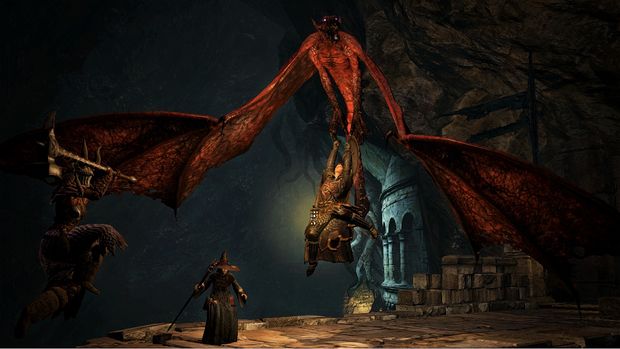 If you’re returning from the original game with a save file, you’ll earn yourself a bonus of an unlimited use Ferrystone (previously expensive one-use fast-travel items), 100,000 Rift Points (which you can use to hire Pawns or access new items on Bitterblack Isle), and six unique outfits (which will be in your storage, at the inn). There’s also a “texture enhancement and Japanese voice pack” on a second disc included with Dark Arisen that smooths out the game’s visuals (only slightly, in my experience) and decreases load times.

When I say that Capcom could have done better here to entice returning players, that’s an understatement. There’s no real new skills to speak of or new modes — so the 10 or so hours of content won’t really be enough to sway some of you if you aren’t keen on replaying the game over and over (and thus, multiple playthroughs of Bitterblack Isle).

Capcom also didn’t use this opportunity to rework the biggest issues of Dragon’s Dogma — namely, the Pawn system. For the uninitiated, your party consists of yourself, one other party member who can level up with you (a special Pawn), and two other NPCs called “Pawns.” The latter two characters cannot level up, utilize unique equipment, or otherwise progress with your main two characters. 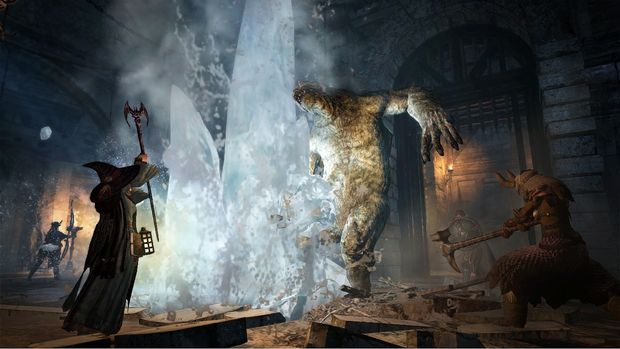 Now, the prospect of constant hiring static characters has worked in other games, but here, it kind of falls flat. Mostly this is due to the fact that Pawns are still as dumb as a box of rocks, which causes problems during the game’s toughest combat situations — most of which occur in the new Dark Arisen content.

Pawns are supposed to “adapt” after fighting a new enemy, but the problem is two-fold — the game presupposes you’re willing to put up with a dumber than normal AI for the first encounter, and even then, sometimes the Pawns will still act like morons during the next fight with the same enemy type. Finally, the repetitive dialog from the Pawns returns (even if you sit them down and tell them to talk less using a special area), despite Capcom’s claims that they toned down the repetition.

But for every misstep, Dragon’s Dogma as a whole can really shine. You’ll completely forget about your trials and tribulations with some of the antiquated mechanics as you’re slashing your way through a giant creature, leveling up your two main characters, and trying out new skills, classes and strategies to best your enemies.

All of that core gameplay translates to Dark Arisen, not to mention the fact that the entire original game (with all DLC, including the Hard Mode and Speed Run gametypes) is included in the package. Capcom could have done better with their upgrades to the game, but fortunately for them, the original game is charming enough for newcomers in particular. With a price drop on Dark Arisen, you’d be crazy not to at least try to experience the world of Dragon’s Dogma for the first time.

In an odd move, the game is only available currently in its fully priced form — so if you own the original, you need to purchase the $39.99 disc or full digital game with no option to purchase a discounted DLC package. As a result, it’s really tough to recommend the game to anyone who felt lukewarm with the original given the fact that it’s essentially the same experience, just with a new island. The small extras almost feel like a bribe of sorts, and Capcom could have done much better than this. Then again, it works both ways as you could rent the original, save a file, and then reap these benefits with Dark Arisen as your first experience.

While I can’t wholly recommend Dark Arisen to anyone but the most hardcore of Dragon’s Dogma fans, if you haven’t touched the franchise yet, this is a perfect opportunity to do so. Despite the issues, the series is an intriguing prospect that does many things right, and shouldn’t be missed by action or RPG fans alike. While Capcom could have done a whole lot more with this expansion, the fact of the matter is the solid game underneath is still faithfully preserved.