I’ve always been more of a Final Fantasy man, but my relationship with Dragon Quest is arguably more special.

Dragon Quest, more specifically Dragon Warrior as it was known in the west, was my first ever JRPG. With what would be a fairly insane event today, Nintendo Power magazine offered free copies of the game through a promotion — which is how I got mine. Given how young I was at the time I don’t think I could have played it any other way.

Nintendo Power followed through, and in the weeks to come, although I don’t remember a lot of specifics, I can recall pillaging dungeons and vaguely understanding the concept of “leveling up” to take on more powerful enemies. With help I ended up beating it and history was made.

Dragon Quest XI: Echoes of an Elusive Age doesn’t hit the ground running as it takes a while to really drag you in. The thrill of booting it up, Bonestorm style, quickly faded as I watched a fairly drawl cutscene involving a sudden evil force and a baby Moses parallel. From there it weaves into a “mysterious past” tale involving the complicated role as the Luminary coupled with an adoption by a kind stranger (a real Pa Kent type).

Before you know it, the “several years” ticker hits the screen and our baby dude is now a shonen rocking a Vegeta cut while you and your childhood friend ready for a coming-of-age ceremony. Not all that exciting right? Well, it’s charming, at least. Elusive Age tutorializes its traditional JRPG combat systems with a mountain climb to said ceremony, and you get to team up with a Very Good Dog that barks and paralyzes Blue Slimes. The Akira Toriyama smile is still in full effect and by proxy, I was smiling too. The only shame is a lack of Japanese voice acting that’s let down by some “oi I fink bruv” over-the-top characters who aren’t fun to listen to.

Again, it gets better. Square Enix opted for segmented zones instead of a full open world and I have to say, it suits Elusive Age. Each individual area is custom-crafted deliberately rather than made to feel sprawling for the sake of it, and I never found myself wishing that they were bigger. Even with a mount mechanic (which is drastically upgraded as the game goes on) they’re just big enough to warrant exploration without feeling like a chore.

You will want to explore too, and when you come back, a handy “here’s what happened so far” narrative catch-up feature is a godsend. I can’t tell you how many times I’ve stopped playing a lengthy RPG only to come back to it years later and think “what in the hell was I doing again?” You might even need a refresher after a smaller rest period because Dragon Quest XI doesn’t always go out of its way to wow you.

It’s not offering anything you haven’t seen before and most of the time the game is content to focus on character development and smaller jaunts rather than major cutscene-worthy events (though there are plenty of those). In a sense it’s above all that: Dragon Quest XI is consistently gorgeous, lighthearted, and pure.

Sidequests begged to be completed not just because of a useful reward, but a laugh or a grin. Each individual biome, while relying a little too much on cliches (there’s a seaside Italian town where everyone talks like they’re Mario), is filled with memorable characters and moments. Very rarely do I feel for random NPCs like mayors, but Elusive Age got me. 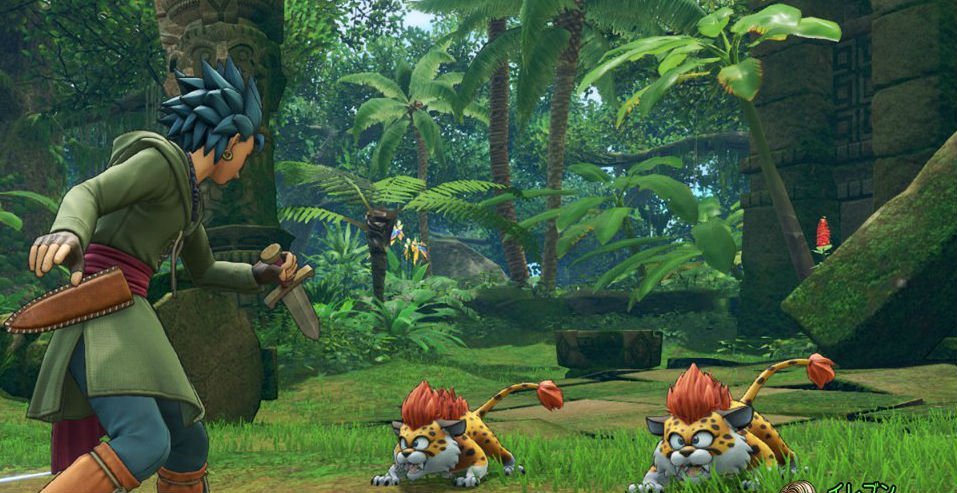 Part of the reason why there’s an overwhelming sense of camaraderie is because of the intrinsic link the characters have with gameplay. You can chat with party members and engage “pep powers” with one another, which are basically supercharged Limit Break-esque abilities with unique interactions. While it’s usually easy for me to build a party I genuinely had trouble choosing which four to stick with here.

Combat itself is largely traditional, like most things Dragon Quest XI. Encounters start as a result of bumping or being bumped into by enemies, who can be struck for an extra jump on the proceedings. From there its a turn-based affair in a small arena with typical options for direct attacks, elemental spells, abilities, defense, and items. XI also brings back the “tactics” system found in other JRPGs, which allows players to sort out different AI strategies like “go all out,” “conserve MP,” or “heal when possible.”

I found that for the most part, especially for non boss encounters, the mechanic works out great, even if it is limited in that you can’t set equations or parameters directly. I even went as far as to roleplay each tactic for every party member, and although it wasn’t always the greatest plan I had fun doing it. For especially tough battles (or whenever you like) there is the option to take direct control of everyone.

As the Luminary you’re a jack-of-all-trades, but other party members specialize. Erik can steal things as the lovable thief, Veronica is the hard-damage mage, and so on. Everyone has a role to play and the endgame party size is large enough where you can create the type of party you want. Where the real customization game comes into play is the hexagonal skill grid; which funnels into several different paths for weapon types and core class skills. If you want your mage to focus more on physical damage and bust out whips from time to time, you can do that, to a point.

The main alternative method to building out your party involves the “fun-sized forge,” which is essentially a cute means of expediting crafting. You acquire the recipe, its ingredients, and whack away at the forge until you’re satisfied with its quality — reforging is an option if you see fit. It’s just complicated enough to warrant experimentation without getting too esoteric to the point where you’d have to check recipes online.

Nominal action sequences like Crash Bandicoot-style chases add some character, and although I’m sure we’ll see plenty of think pieces about how there should “never be stealth portions in a JRPG,” nothing I encountered encroached the realm of frustration. Since the old-school save system can boot you back to a previous file (with level progress and equipment intact, at the cost of some gold), being able to skip previously viewed cutscenes is a godsend.

Once Dragon Quest XI takes off (for me it was roughly four hours in), it never really dips into a plodding state. New faces are welcomed into the fold at a decent pace with the proper amount of drama, and most of the people you meet along the way are worth listening to or helping in some way. I can’t elaborate further at the moment but there are multiple endings and more story beats to hit after the initial journey, on top of a challenge mode that will test even the most astute JRPG players with caveats like “party members can’t use items purchased from a vendor, only found equipment.”

Enix, and by proxy Square, have found myriad ways to repackage the journey of Dragon Quest and Dragon Quest XI: Echoes of an Elusive Age proves that they haven’t run out of ideas yet. It’s one of the easier modern Dragon Quests to get into precisely because it gets back to basics. If you’ve been pining for an older-school character-focused RPG instead of the player-created party focus of IX and the MMO aspect of X, the wait has ended.