Not a send-up but a celebration

Dragon Fantasy Book 1 is a celebration of the NES RPGs many of us grew up with. This is, for my money, an equal parts great and terrible thing. The game sticks so closely to the script that it carries with it some of the less desirable aspects of the genre (rote grinding, difficulty spikes, etc.) coupled with a throwaway script, yet it managed to slowly grow on me in its latter half thanks to some lovely pixel art, good music, and amusing characters. 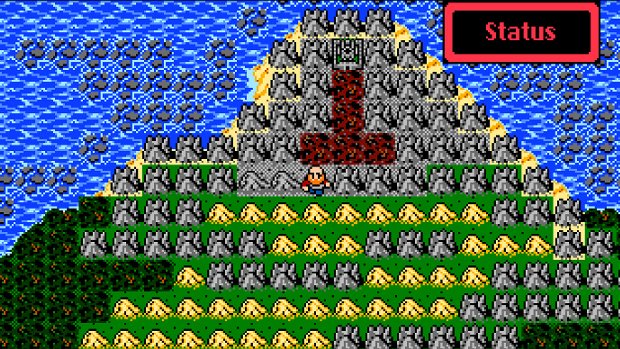 The game is split into three chapters and one intermission segment. The first chapter is the tale of retired knight Ogden, who is thrust back into hero duty after the kingdom is attacked by a dark entity and everyone is left ill. It’s the most content-heavy chapter and unfortunately the one I had the most problems with.

As Ogden, you’re tasked with collecting several pieces of magical armor from several perilous places before you can take on the Dark Lord. The biggest problem is that Ogden’s journey is a solo one, which makes the rate at which random battles activate (every few seconds) and the difficulty (enemies will regularly hit for one-fourth your health) a bit aggravating. The game is proper retro — it’s even visually restricted to NES levels rather than employing a faux retro look, though there is an “enhanced” mode with instrumental music and a bit more graphical oomph. I preferred the classic look.

Ultimately, I developed a system: Battle enemy. I’m probably dead, so let me go all the way into the inventory menu to use a herb or two or three (always keep like 70 on you). Take a few steps. Battle enemy. Near death again. Back to the menu for herbs. This goes on until you’ve grinded enough to raise some stats and purchase all the best equipment, at which point you can carry on at a decent clip until you reach the next echelon of enemies that are better than you and the cycle repeats.

It’s so much of a slog that the comedic tone, nostalgia, and love for the genre just can’t overcome its shortcomings. The EarthBound-esque enemy names and in-battle text (“Laidback lizard lost too many limbs to continue”), while appreciated, become something to button through as quickly as possible. Yes, the wolf enemy’s name is Blitzer, and it’s funny that he splits after battle because his ratings plummeted, but I’m less amused after killing the 30th one — especially because it’s a re-skinned version of previous wolf enemies.

The game may be a bit goofy, it tends to play itself straight. The result then isn’t a failed parody, just a trope-laden tale with a lot of familiarity that laughs at itself and invites you to laugh along, though a lot of the contemporary humor (Reddit and PETA references, et al.) feels discordant. The subsequent chapters, though shorter, did start to win my favor back just by virtue of having multiple party members, making battling less of a slog and offering some new looks to the dungeons. They each feature different characters from the tale and fill in aspects of the plot during and after Ogden’s quest. 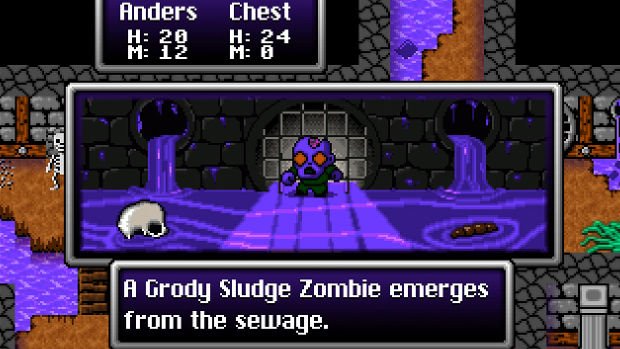 Most interesting is the Minecraft-themed intermission that looks to bridge Book 1 and the eventual SNES-styled Book 2. In it, a rudimentary monster-capturing party system is employed, and you even mine blocks to craft gear instead of grinding for cash. There is also a host of new enemy designs in the section, which was much appreciated.

In staying true to its roots, Dragon Fantasy Book 1 is a bit of a drag. I like the main characters well enough, but I’m not particularly interested in the glibly presented story or world, and some of the retro JRPG systems are super aggravating or simply mind-numbing. That being said, the game did grow on me in the last three sections, and I think the bridging of storylines — and mechanics — in Book 2 could prove a bit more fruitful.