Dragon Ball Z games are a dime a dozen. The TV series may have ended 15 years ago, but that hasn’t stopped developers and publishers from trying to make the ultimate recreation of the show’s experience in game form. The latest attempt even goes so far as to claim such right there in the title!

So what makes Dragon Ball Z: Ultimate Tenkaichi so… well… ultimate? Is this truly a case of truth in advertising, or is it merely a wish made once all seven Dragon Balls are gathered? Read on, dear friends, and ready those “Over 9000!” comments. 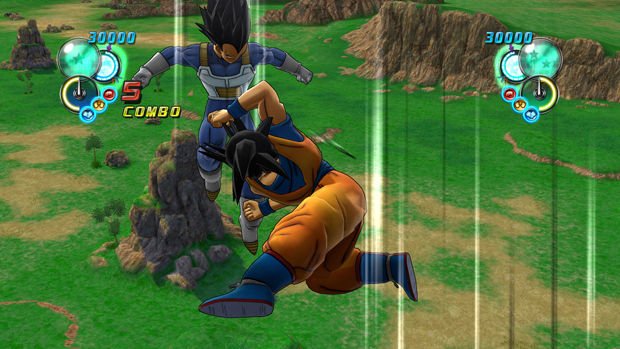 First, let me say how ambitious Ultimate Tenkaichi is. Taking the huge storyline of the Dragon Ball Z series and condensing it for a game is no small task, especially when you weigh the fact that every DBZ game has repeated the same story ad nauseum. If I have to fight Raditz and Piccolo has to kill Goku at the beginning of every game, I’m going to shoot someone.

Thankfully, the story has been nicely condensed to keep things fresh for folks familiar with the source material while not alienating those who are viewing a DBZ product for the first time. Developer Spike has done a great job of emulating the look and style of the show without going overboard on re-hashing. The bright colors pop and the backgrounds all fit within the scope and storylines involved. 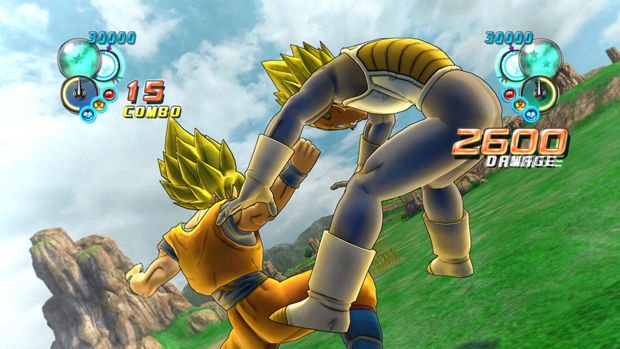 Recreating the epic battles the show is known for is an entirely different matter, and despite some issues, Spike has done admirably well in that respect too. Combat is heated, with characters charging Ki here and blasting energy there. There’s even environmental damage based on attacks, though the environments only stay damaged for a brief, cinematic “aftermath” moment. Once the animation is finished, the area is clear of craters. It would have been nice if they stuck around and affected gameplay, but it’s still a cool effect once the devastation occurs.

There are two standard attacks, quick and hard. After a series of quick attacks, you’ll go into “Clash” mode, where you basically have a 50/50 shot at hitting the opposite button your opponent does in order to win the clash and beat down your foe with a series of flashy moves. The first few times you do this, it’s exciting and visually stimulating, but after a while, it becomes what all DBZ games degrade to: repetition.

The main problem here is that all the characters perform essentially the same way. Sure, their special attacks (executed by tilting up or down on the right analog stick once “Spirit” energy has been gathered in battle) are unique to each character and look fantastic, but the standard combat looks and acts the same. As the game progresses, your character naturally evolves with the storyline, but since they all play the same, it doesn’t make much difference, even despite the obvious power difference (cue “Over 9000!” now). In fact, while floating through the overhead map in story mode, I stumbled upon the in-game “World Tournament” and beat it with my base character without having advanced at all.. 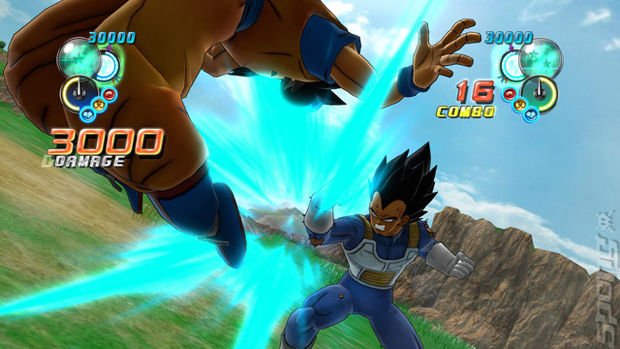 That isn’t to say there’s not a lot to do here. Far from it, as Ultimate Tenkaichi boasts the most robust gameplay modes in the series. For the first time ever, players can create their own Saiyan heroes and take them on an alternate-history version of the DBZ storyline, leveling and powering up their characters through training missions between battles. While the character creation isn’t as deep as, say, those found in a WWE game, there’s still a decent variety of edits to be made. Plus, it’s kind of cool to power up your character for a brand-new beatdown.

The story modes (the main story and “Hero Mode”) will last about a dozen hours each, but they do get a bit tiresome. The presentation switches between cutscenes with in-game graphics and clips from the anime itself. Sadly, all of this is consistently broken up by long, arduous loading screens — if I ever see another damn capsule, it’ll be too soon! There are also your standard versus and tournament modes, as well as online play, but I had some connection issues in trying to find matches.

Capturing the breadth of the Dragon Ball Z franchise is no small feat, and Ultimate Tenkaichi does an admirable job. While combat can be a bit on the repetitive side, there’s still that hint of satisfaction when you decimate your foe with an canyon-creating power move. There’s a lot here for fans to enjoy, and while the story may be streamlined for new fans of the franchise, I can’t really recommend it to anyone but the hardcore.