Once upon a time I was falling in love, now I’m only falling down wells.

While the roguelike ties and cave-like setting might scream Spelunky, the mostly one-man project is more like a blend of Vlambeer’s Super Crate Box and an upside down vertical shooter like Ikaruga. 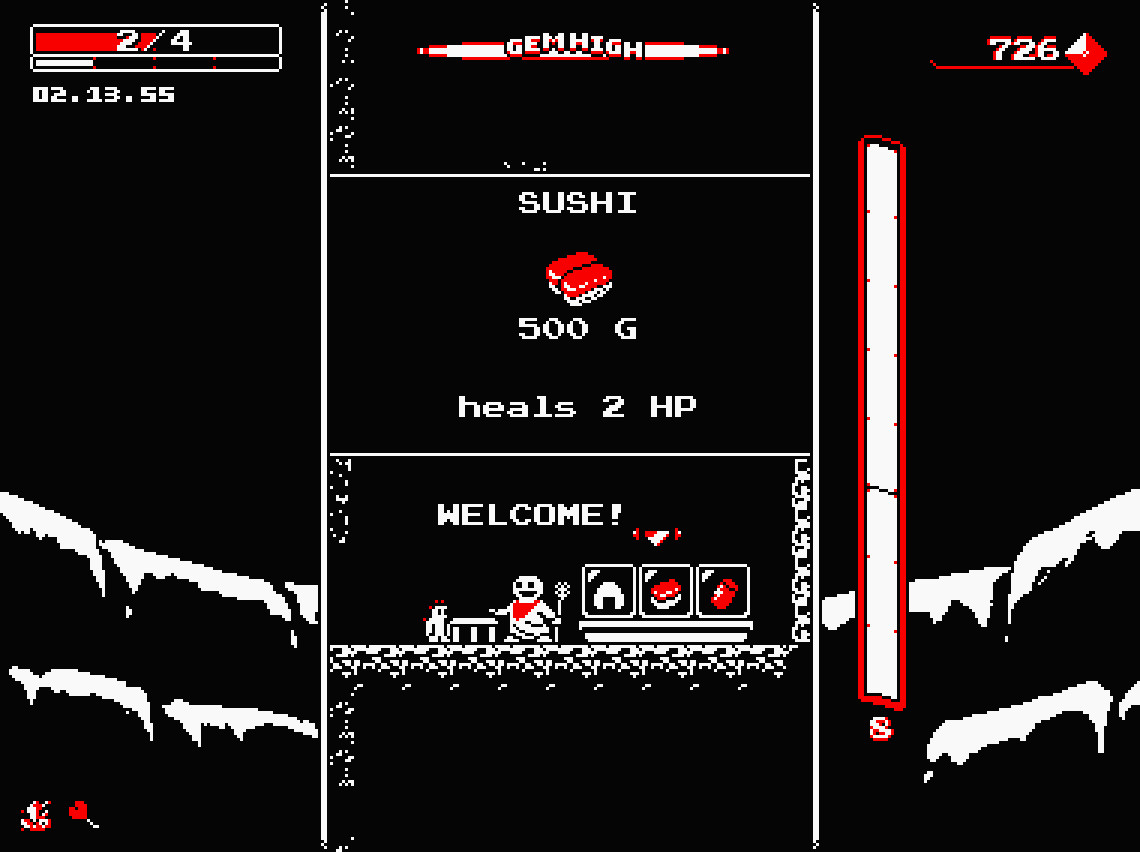 Downwell asks you to learn with it, explaining nothing outside of the control scheme (move with directional pad or analog, jump and shoot with one button) and the upgrades between levels. Initial expeditions down the well are clumsy. Your Gunboots start with limited charge (think: ammo) and you have to refill them by touching solid ground. Or — wait, they refill when you stomp on an enemies’ head, too? — and, oh no, don’t try and stomp on an enemy that is an angry bright red.

These are the kind of things you learn as you delve deeper and deeper into Downwell‘s four worlds (three levels each) and they are presented intelligently. For example, the first spat of blood red enemies that you shouldn’t be jumping on all have spikes, video game shorthand for danger. Later ones won’t warn you so nicely. And of course there’s trial and error, too, like touching a hot stove, for those who don’t get it.

Level randomization requires you stay engaged. Different power up offerings between levels will change how you play. Dimension-shattering time voids are occasionally cut into the well walls and host a treasure trove of gems or different ammunition. The latter is where the Super Crate Box comparison is obvious.

Changing ammo isn’t a strict necessity, but it practically is, given that picking up a new ammo types will often come with a heart or some battery charge for the Gunboots (more ammunition between reloads), but different ammo types function in drastically different ways. Shooting is actually more useful in fighting gravity and keeping yourself from falling too quickly into unseen trouble than it is for killing enemies; they should typically be bopped. Especially since bopping enemies fills your Gunboots and stringing together kills without touching down gives you rewards. It’s best to stomp out enemies, using your ammo stores to occasionally slow your descent or send you across the screen to stomp something else.

Aside from the constantly changing levels, ammo types, and upgrades, new “styles” are unlocked over time, like the “Boulder style,” which features a much fatter boy who starts with six HP instead of four, but only gets to choose from two between-level upgrades instead of three. Then of course there are dozens of Palette options that change the colors of the game, though I have only found a handful I like as much as the default black, white and red. The variety makes the frequent deaths more palatable and I would probably buy a custom dedicated handheld that just played this game.

Because death comes so quickly, health is at a premium. If you slowly inch your way down the well, stopping at every platform and dutifully eliminating enemies, you’ll take forever and likely not rack up enough gems to clear out shops, which are operated by the the most adorable timeline version of a snowman (who gives a good disapproving face when you jump behind the counter). 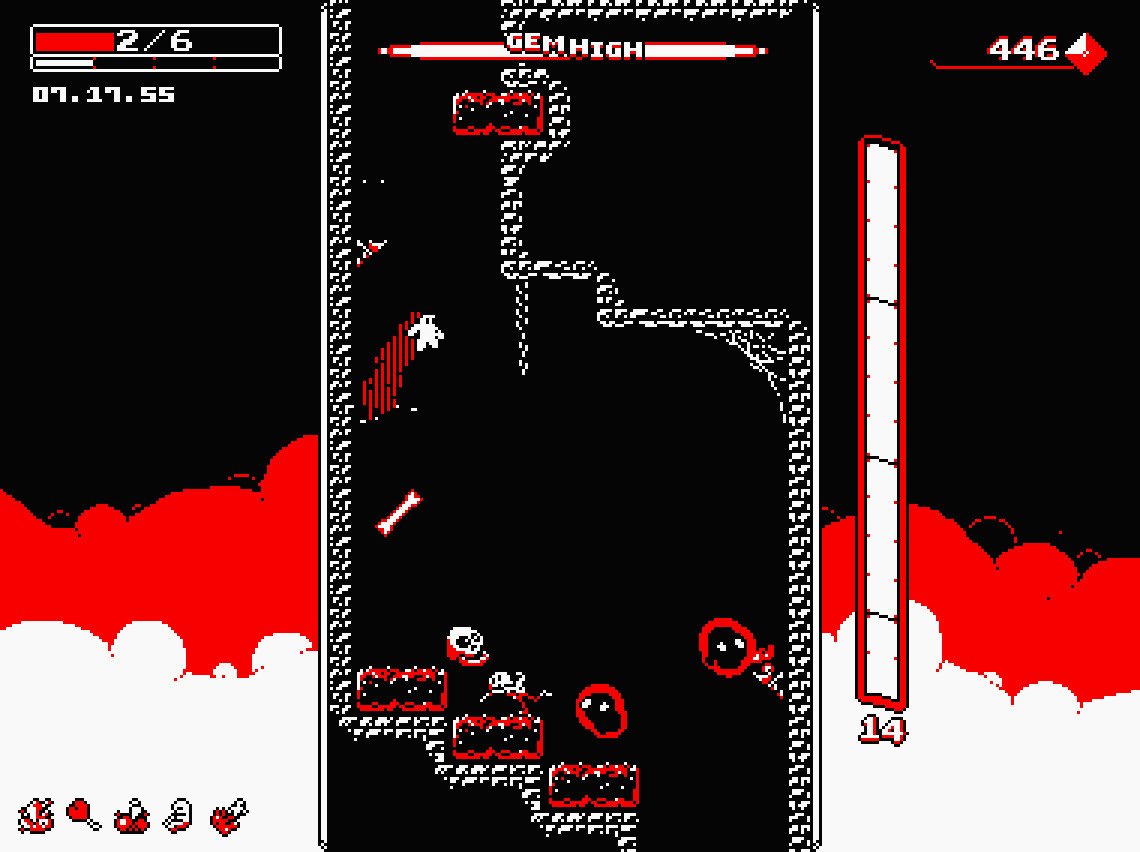 But as you get better and can chain combos, netting gem, battery (ammo) and health bonuses, you can stay in the black, even increase your max HP. It’s all about building a better, more equipped you while you play. It’s always fraught, mind. You are working against gravity and your stabilizing shots will sometimes rip the ground from under you as you destroy blocks on the way down that might have offered reprieve. Or you accidentally shoot an enemy you’re coming up on, losing a chance to replenish your ammo, and end up in a dangerous free fall.

My 15-hour transition from inelegant tank (Boulder style) laboring down the well to eyes-closed, 25-kill-combo (Levitate) falling with style has been a flurry of close calls, of “one more run,” of consistently dying to the boss despite doubling my starting health. The knees-braced bullet pounding side winding across the screen to slow my descent, the meaty pop of brain stomping and the brief upward moment it grants before gravity yanks me down again. And for such a noble reason.