Beat-’em-ups are quite the strange genre to me. I grew playing many of them: Simpsons, X-Men, and Turtles in Time in the arcades were my jam. In fact, I’d say they are still my jam. That said, it’s easy to recognize their faults, which are really faults of the genre as a whole, even if those faults seem to melt away when playing with some buddies. Lining up attacks can be a chore and they’re generally painfully simplistic when it comes to actual gameplay.

Double Dragon: Neon is a carefully crafted love-letter to a genre and a time period. It is an ’80s beat-’em-up through and through, but with one caveat: it has some of the best gameplay to ever grace the genre. 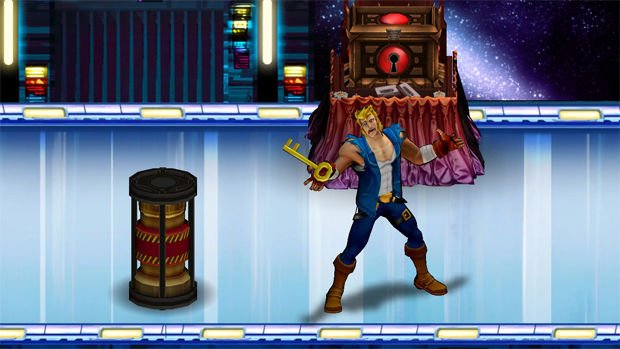 Double Dragon. Billy’s girlfriend, Marian is kidnapped. Get her back. Story.

The plot is barebones because, well, games of this time and genre always had barebones plots and this is really a re-telling of the original Double Dragon tale. The story advances through some in-game actions at the end of levels along with lines of voice work interspersed throughout the levels themselves like “I have to find Marian!” Special praise goes towards Skullmageddon, the pun-loving antagonist in Double Dragon: Neon. His voice work and dialogue are so damn amazing that each encounter is something truly special. The ending, in particular, is something you won’t forget any time soon.

In the beginning, players may think that Neon has “clunky” controls. Things seem to happen sluggishly, regardless of what your fingers are doing. You see, the controls take some time to really understand. They’re “clunky” on purpose. Everything has some weight to it, even running. It’s deliberate, not clunky. Mashing buttons, which is common in the genre, is sure to result in a swift death. Think of it like a fighting game: everything has a certain amount of frames, and that’s how long the move takes.

Like a fighting game, a player who understands the controls will be pulling off some “bread and butter” combos to defeat even the most common of enemies. The first enemies encountered are no joke: if they manage to pull off their combo (two hits), you’ll be down about half of your health. Half! On Normal difficulty! Give it time, and after a while you will be executing very intentional combos that really feel satisfying.

At the core of the gameplay is the dodge mechanic. A perfect dodge results in “Gleam,” significantly increasing the damage of all attacks. Even without perfect dodges, evading attacks is absolutely crucial because as I mentioned, one mistake can lead to a lot of health being taken away. If a direction is pressed while dodging, the player will roll in that direction. Mastering the dodge is the first step to mastering the combat.

When playing cooperatively, both players can high-five each other. This is a mechanic in the game. Players can high-five to gain health or earn Gleam, chosen by the initiating high-fiver. But be careful! Your bro can totally psych you out and leave you with nothing!

In addition to punches and kicks, there are special moves, called Sosetsitsu, which can be collected and used. In order to unlock Sosetsitsu moves, a player must first collect cassette tapes from defeated enemies. The more tapes of a specific Sosetsitsu collected, the more powerful that tape gets. This means that your favorite Sosetsitsu might be significantly weaker than others, due to nothing but dumb luck. On the other hand, this situation may encourage players to use Sosetsitsu moves that they would otherwise ignore, adding more diversity to their playstyle. These moves use an energy bar, and each moves uses a different amount of energy.

There are also Stances, collected in the same way. These are passive abilities, usually in the form of stat increases. Some will have specific conditions, like increases attack power in correspondence with consecutive hits, while others will straight up increase a player’s defense. Like the Sosetsitsu moves, these are acquired and improved by collecting tapes. 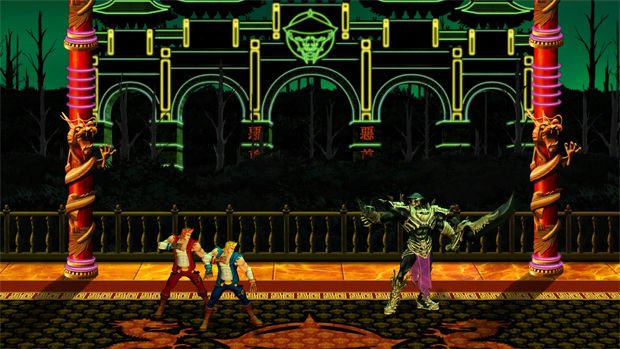 Double Dragon: Neon supports fully rebindable keybind controls, but regardless of which keys were used I couldn’t get comfortable playing on a keyboard. Once I began using an Xbox 360 controller, however, everything was much better off. It doesn’t natively support controls outside of the Xbox controller, so keep that in mind when jumping in.

This game is the ’80s. It’s a beat-’em-up with cassette tapes, bright neon lights and colors, and over-sexualized men and women, the latter occasionally screaming “punish me!” as they die. Everything about the aesthetic acts like a time machine to an era saturated with hair metal, jean jackets, and Rubik’s cubes. The game is also absolutely hysterical. As mentioned, Skullmageddon steals the show every single time he’s on screen. Enemies cartwheel on screen yelling “GYMNASTICS!” Billy will ask “What the butt?!” when trying to use a key on nothing. It’s as campy as Adam West’s Batman on a camping trip in the best of ways.

Super special mention has to go to the game’s audio. Jake Kaufman is absolutely brilliant. It evokes classic ’80s metal and arcade games simultaneously, fitting the game’s theme perfectly. In what might be the best thing ever, each Stance and Sosetsitsu has its own jingle to go along with it for when the player hovers over it. These jingles are, to put it bluntly, completely mindblowing. They’re simple, stupid, and again, contribute to the overall campy ’80s feel of the entire game. Without Mr. Kaufman, Double Dragon: Neon would fall painfully short of being “the complete package.” With him, the game is elevated to a level that very few achieve.

Not everything is perfect in this PC version, however. There seems to be some stuttering after playing for a certain amount of time, likely due to a memory leak. Rebooting the game solves the problem, but that doesn’t absolve the issue. Online multiplayer is also included in this version, but from my experience, the lag makes it unplayable. Considering how demanding the combat system is, input lag is nothing short of a death sentence.

In addition, it is possible to join someone else’s game at any point, without being able to filter. When I searched for a game, I joined someone who was in the process of fighting the final boss, even though my save file was still on level three. Had I not already beaten the game, I would have been pretty upset considering how delightfully wonderful the finale is. If you don’t want anything spoiled, host your own games. 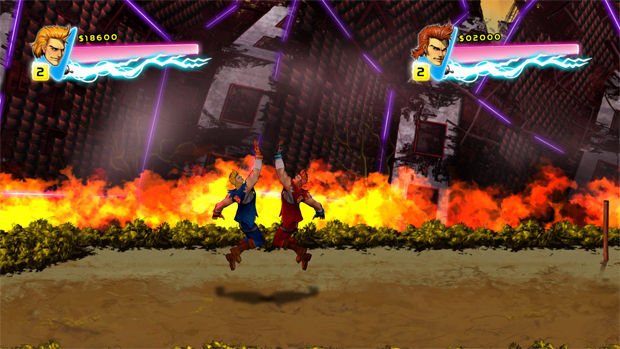 I fear that a lot of people will give up on Double Dragon: Neon too early, either because it “isn’t real Double Dragon” or because of the “clunky controls.” I encourage you to stick with it, because Neon truly is one of the best games in the genre from any decade. It’s got humor, visual flair, excellent gameplay, and a brilliant soundtrack. Some technical problems hold this version back from being near-flawless, so it might be in your best interest to grab a “bro” and team up in local multiplayer, high-fiving each other until your hands bleed.

I think Double Dragon: Neon can be summed up perfectly using a jingle from one of the game’s Stances, titled “Training Wheels”: “Dad took off my training wheels, boy oh boy how good it feels!“