The definitive Donkey Kong on the go

I remember where I was when Donkey Kong Country Returns was announced for the Wii. I was in the E3 press room during the Nintendo conference, and I shouted a few obscenities at the screen after the surprise trailer, garnering everything from thumbs up from fellow fans to confused glares. You see, the Donkey Kong Country franchise is special to me, having influenced my view on gaming and platformers as a whole, and after a series of outliers like Donkey Konga, I was ready to return to its roots.

However, I had a few minor issues with the Wii game that I felt held it back a bit — mostly the forced implementation of motion controls. But now, nearly three years later, I’m here to say that the re-launched Donkey Kong Country Returns 3D is the definitive version of the game, and if you enjoy platformers in any fashion, you need it in your life. 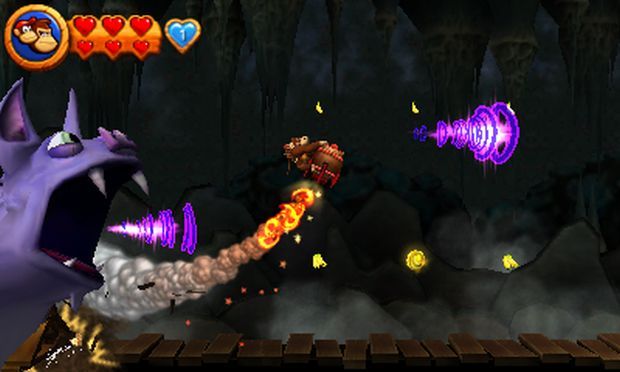 Donkey Kong Country Returns did a lot of things right. It brought back an old franchise with a new sheen that somehow still preserved the magic of the originals, and it re-introduced something I felt was sorely missed from new Nintendo platformers: challenge. Seemingly out of nowhere, Returns took the Wii by storm, offering up one of the most challenging platforming experiences on the console.

While I never found it to be unfair strictly in terms of design, a lot of other gamers were turned off, but I have good news for those folks. If you were more than a little frustrated at obtaining a 100% rating in the original, you’ll love the easier, non-patronizing “New Mode.” Not only does it add another permanent heart to your lifebar, it also adds more items to Cranky’s shop — most notably an item that grants more leeway on the devastatingly difficult minecart and rocket levels. These sound like small tweaks, but an extra hit all-around is a game-changer that makes a lot of the harder levels more manageable for gamers of all skill levels.

Also intact is the Super Guide, which offers you assistance should you die too often on one stage (it lets you progress, but marks the level as incomplete). Both it and the New Mode are thankfully optional, and the core experience is preserved in every way. If you want to challenge yourself, the original mode is still there with no compromises in difficulty. And in case you were wondering, each mode is gated off on its own save file, so if you want to best the original mode, you have to go completely legit.

One of the most controversial aspects of the original Wii edition is the forced motion controls — specifically, shaking the remote to roll and blow on objects. Many people were outright turned off by this choice out of personal preference, and others claimed it artificially heightened the difficulty. Personally, it was by far the only major problem I had with the game, given that it would sometimes dead zone when I performed two or three quick rolls, which can be problematic for a precision platformer. Now, we could debate the merits of motion controls until the cows come home, but I think we can all agree on one thing: Nintendo should have at least added a Classic Controller option.

Well, now you can reap the benefits of full tactile control on the 3DS, and I have to say, it’s just as excellent as it sounds. If you want to roll or blow, you don’t have to shake the controller, you just press Y or X. It’s as simple as that, and like the tried-and-true formula of the three proper Donkey Kong Country games before it, it works perfectly. No longer did I have trouble making a few of the trickier jumps from the original with the new 3DS control scheme, and as a result, I found the game to be much more enjoyable as a whole.

Additionally, pressing L or R grabs barrels or vines, and that’s about it — no weird gyroscope controls, no forced jiggling of the 3DS unit. You just play it like an old-school game. While the controls could have stood to be more customizable (the only other option is an alternative scheme with the D-pad), it took me all of two minutes to adjust to the new layout, after which I had zero issues during gameplay. Multiplayer is intact, but you need two copies of the game, and player two (Diddy Kong) doesn’t save world progress — just like the original, in that regard. 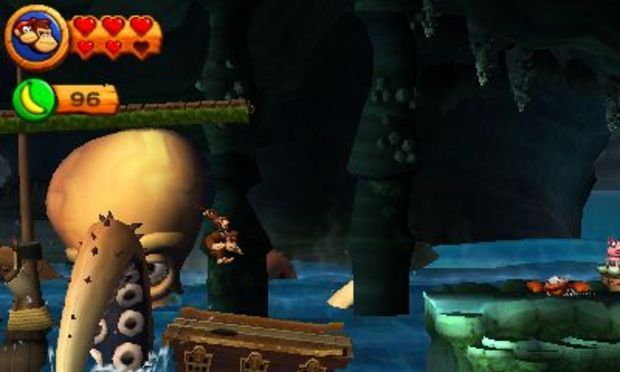 The visuals in Returns are as beautiful as ever; somehow Monster Games was able to compress the original into portable form without a marked loss in quality. Every detailed, colorful backdrop, every character design nuance is faithfully recreated, and the 3D effect, while strong, perfectly accents the style. Given the fact that the original had a ton of background and foreground platforming tricks, it’s like Donkey Kong Returns was made for the 3DS in the first place. While it doesn’t run at the same 60 FPS rate of the original, I didn’t once feel like any of my deaths could be blamed on it — to be blunt, I didn’t even notice the drop in frame rate, and this is coming from someone who usually notices these things.

But visuals would mean nothing without excellent level design, and Donkey Kong Country Returns 3D has it in spades. Nearly every level will throw something new at you, whether it’s a new concept unique to a stage, such as a rampaging squid or a deadly tidal wave, or a giant mini-boss bat. Nothing is ever overdone, and like the original SNES games, every stage is loaded with secrets and shortcuts.

I also loved the throwback musical tracks that complement Returns perfectly. The overarching theme with Returns is truly “old is new again,” as there’s plenty of love for the original games with Wii version developer Retro Studios’ signature mark stamped on every facet of the experience. 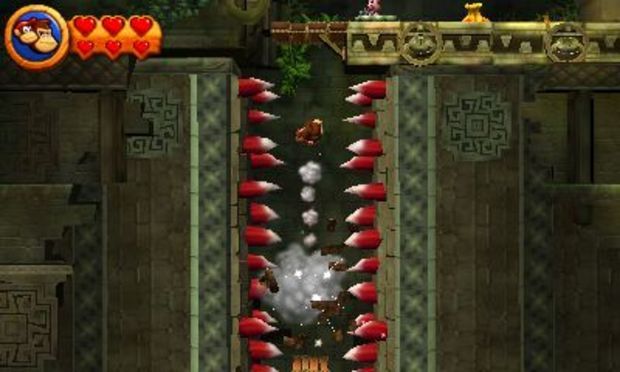 There are tons of optional, challenging secret levels alongside the required stages, and going for a full 200% rating will take time and a ton of skill. While you technically only need to collect the mostly in plain sight K-O-N-G letters in each stage to unlock the secret orbs and thus the final bonus level, there are hidden puzzle pieces and time trials to best as well. This time around, the bonus is actually a new world of nine (eight new) stages, all of which offer up a pretty enjoyable experience (one of them has you build a monkey mech as you go through it!).

Truthfully, as a retro gamer, while I never found the core game to be that challenging, attempting to get everything (including the extra mirror mode that restricts you to one heart and no power-ups) is one of the hardest quests you can ever embark upon in gaming. While I gave up in the original due to some motion frustration, I’m well on my way to utterly completing the 3DS version (I only have mirror mode left), and I’m loving every minute.

If you missed out on Donkey Kong Country Returns the first time around, or you disliked the motion-heavy controls of the original, pick up this version. With solid tactile feedback, the 3DS edition of the game has cemented itself as one of my favorite platformers of all time without question.