For the most part, I dig Bomberman-likes. Even though they only come once or twice a year these days, there’s nothing quite like powering up a party game and blowing up friends for a few hours.

Dollar Dash is very much a Bomberman-esque title, in that it pits four players in an arena like setting with traps and power-ups, but it tries to mix things up a bit with a special game mode that involves carrying cash to a parked car for points.

Sadly, it’s not really enough to make a mark on the genre. 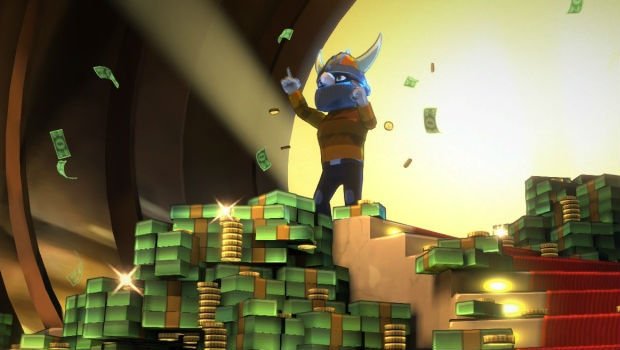 Dollar Dash is the latest game to capitalize on multiplayer madness craze, with support for local coop and online play. You play as relatively vanilla two-bit criminals as you battle other criminals for glorious cash, which unlocks more power-ups and perk-like abilities for your avatar.

There’s three modes on offer: Dollar Dash, Hit’n’Run (deathmatch), and Save the Safe. Dollar Dash, the titular mode, tasks you with placing cash (points) into a vehicle that periodically makes an appearance on the map. In the meantime, you have to collect cash in a finite moneybag, beat it out of other people, and keep yours safe while you wait for the next car spawn.

To be blunt, it isn’t a whole lot of fun. Basically, gameplay distills down to ganging up on the guy who has a ton of cash, and hoping that when the car actually gets there, that everyone hasn’t ganged up on you.

The pacing feels really off because often times, like some of the worst Mario Party minigames, the lazy player who sits in the corner and waits patiently for everyone else to duke it out will often leave the arena as the victor. There’s just not a whole lot of incentive to really dig in and constantly get involved, which is a problem after repeated play. 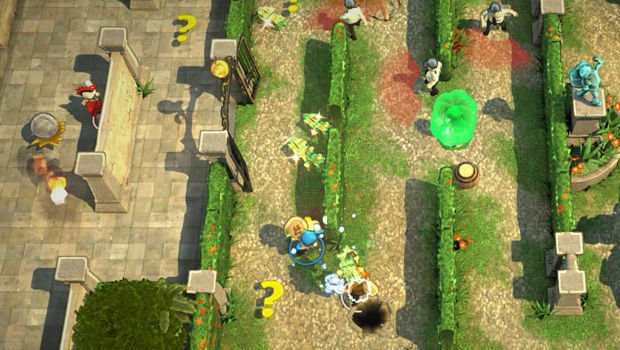 Because of this fundamental flaw, I had exponentially more fun with the Hit’n’Run and Save the Safe modes. Since Hit’n’Run is basically just deathmatch, you really can’t screw it up, and outside of the fairly ho-hum nature of the powerups, it functions exactly how you’d expect it to.

You blast some dudes, load a new map, blast some more dudes, and go about your way. It’s basically Bomberman with projectiles, and a lot less strategy.

Save the Safe is a mode similar to Halo‘s Oddball gametype where players have to hold onto an item and play keep-away to wrack up points. Unlike Dollar Dash mode, there’s always something happening to keep you interested, as the safe is always in play, and there are a decent amount of avenues to play keepaway as you try and get some fleeting points. This is my second most played mode next to Hit’n’Run.

There’s not a whole lot of thought that went into the designs here, but they don’t really detract from gameplay — traps are a different story. Now, I’m a fan of the trap genre, but I think the way they were implemented here is dull. 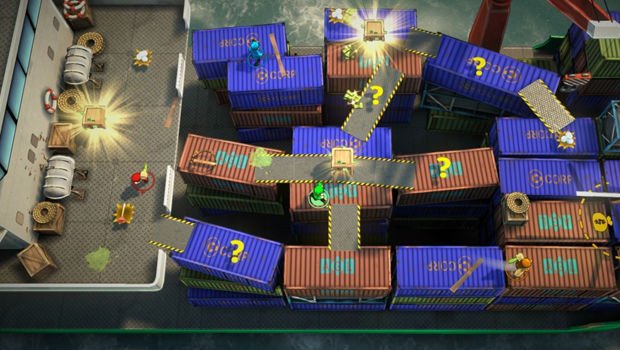 Basically, you just grab a trap, throw it on the ground (which enemies can see), grab more because pickups are constantly spawning, and repeat. Unlike Bomberman or Trap Gunner, placement doesn’t matter matter so much outside of throwing them down at choke points: there’s no real strategy involved given the hectic nature of the game.

Perhaps if a cool mechanic was added, like a searchlight button, and players couldn’t view traps from opponents through said searchlight, it could have been something special. Instead, it feels like most of the powerups were added to tick a wacky checkbox.

That’s all there really is to it, honestly. Outside of winning matches and earning more cash to buy perks and costumes with (most of which still force you to use the two-bit criminal aesthetic), the gameplay is relatively the same every round. More modes really would have gone a long way, as would a total rework of how the Dollar Dash mode operates.

Online play works about as well as you’d expect a downloadable game to function, with a relatively low wait time to get into lobbies, and quick access to the game’s three modes.

Dollar Dash is a serviceable game, even if it doesn’t aim very high. If you’re bored of constant deathmatches in Spelunky‘s multiplayer versus mode, or you’ve saturated every last round of Bomberman and the many clones it spawned over the years, Dollar Dash will give you a few evenings of enjoyment.

If you’re not a mega-fan of the genre though, it’s probably best to keep your dollars in your wallet.