Epic Mickey is easily among the more tragic wastes of potential we’ve seen in the videogame industry. It first whipped fans into a frothy lather of excitement when concept images were shown, displaying a twisted and macabre take on the Disney universe, promising a truly dark Mickey Mouse adventure.

The more the game developed, the more this premise was neutered, as Disney’s sugary overseers refused to take the brave steps needed to realize those early visions. By the time Epic Mickey came out, it was nowhere near as remarkable as it could have been.

Disney Epic Mickey 2: The Power of Two, however, is quite remarkable indeed … but only because it’s so rubbish. 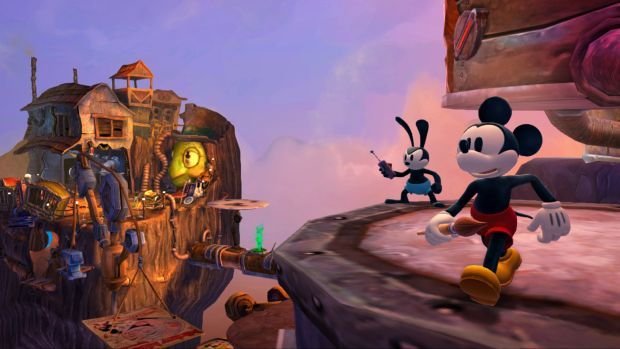 Taking place after the events of the original Wii title, this sequel promises to be bigger and better, yet retreads old ground and does nothing to address the legitimate complaints players had last time. Even worse, those few tiny areas in which Epic Mickey 2 attempts new things only contribute to making the overall product worse.

The sequel’s story sees Epic Mickey‘s Mad Doctor return, now claiming to be a good guy and winning favor with the Cartoon Wasteland’s leader, Oswald the Lucky Rabbit. In a plot that grows exponentially inane and contrived with each step forward, Mickey finds himself returning to the realm of forgotten Disney characters, teaming up with Oswald in order to resolve the vaguely defined conflict that we’re supposed to care about because somebody told us it matters.

This time around, the game is fully voiced, but this is one of the aforementioned new features that help make things worse. The voice acting is universally dreadful, with exuberant squawking and simpering from heroes and villains alike. You may have been fooled by marketing into thinking that Epic Mickey 2 is a musical, but it’s not. The only character to really sing is the Mad Doc, in a running joke that stops being funny after the first cutscene, especially since the voice actor’s gravelly tones grate on the ears and the tunes themselves come across as awkwardly forced. Only one scene in the game feels like a real musical number, and even then, it’s hardly memorable.

Gameplay is largely preserved from the original Wii title, and using a traditional controller feels like a notable downgrade. For non-Wii versions, you’ll be using the right stick to aim a targeting reticule around the screen, making it perform like a third-person shooter despite the camera, controls, and interface framing themselves around a traditional 3D platform game. As you attempt to move and fire, the camera regularly shifts the reticule away from the target, and the way in which the screen moves independently of Mickey’s firing line makes combat uncomfortable and difficult to visually process. It’s something I don’t think I ever quite got used to.

Once again, Mickey is armed with both paint and thinner, which he uses to remove or add pre-determined elements to the world. He can also use thinner to destroy monsters, or paint to turn them friendly. It’s a system that never expands, isn’t exploited in any clever way, and generally removes a sense of tactility and interaction with the world. Spraying paint at an enemy just isn’t very satisfying, especially when it’s such a struggle to keep the stuff on target as the opponents run wildly around and the camera does its best to disorient combatants.

Gameplay is divided into action-platformer sequences with light puzzle elements, and 2D sidescrolling levels. Players use the 2D levels, aesthetically inspired by classic Disney shorts, to travel to new areas of the Wasteland, whereupon they’ll be required to engage in some fetch-questing and paint-splashing to advance to the next area. Every now and then, tasks can be solved in one of several ways, with a light “moral dilemma” element to them. Such “dilemmas” never really impact the story and seem to exist just to look interesting, rather than be interesting. Neither the 3D or 2D sections last very long, leading to Epic Mickey 2 becoming quite the disjointed affair that rushes its players from one chapter to the next in a maladroit fashion. 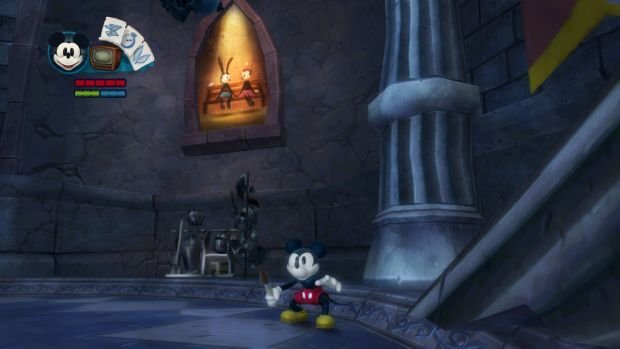 In fairness, some of the 2D sections can be quite enjoyable, especially when they take on the appearance of old black-and-white cartoons. As in the original game, these are the standout moments of the adventure. It’s just a shame that they’re so short, and almost insultingly simple. The levels are never designed with any intricacy, instead providing rudimentary left-to-right progress with a few obligatory obstacles tossed in the way. It’s a shame nobody felt like putting more effort into these areas, as they’re the only places where potentially compelling gameplay can be found.

Rather than evolve the gameplay in any meaningful way, Junction Point has instead settled on a tired old standby to give the illusion of evolution — co-op. This time around, Oswald is available as a secondary character in an offline cooperative journey. Instead of paint, Oswald uses a remote control that stuns enemies or powers various machines appearing in Epic Mickey 2‘s trite little puzzle challenges. He can also use his ears like propeller blades, ferrying Mickey across chasms in a manner similar to Tails in Sonic the Hedgehog 2.

Co-op is not something to be ignored, and my advice to you is that, if you insist on playing this game, you do so with a human partner at your side. Relying on the CPU to control Oswald is a big mistake, as his A.I. is pathetic and regularly works to sabotage a solo player’s progress. Left to his own devices, Oswald would rather run around worthlessly than actually help, choosing to attack enemies only at random and often preferring to scurry about in circles or let himself get hit. At times, he’ll disappear from the game entirely, respawning on a whim. Pressing a button to call him over only seems to work half of the time. 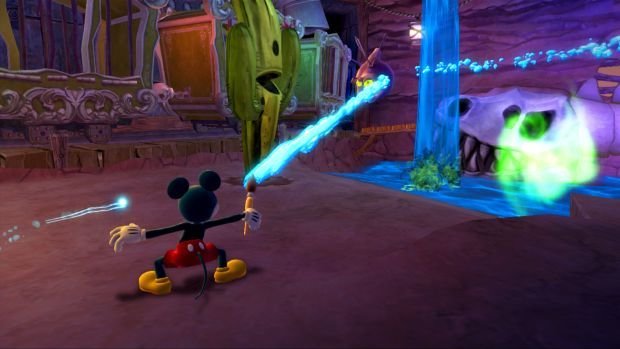 He’ll activate machinery only when he feels like it, and he has an awful time following Micky through sections that involve jumping on multiple raised platforms. One particularly nasty area requires both players to scale a wall, at the top of which Oswald is supposed to glide both heroes across to another ledge. Oswald simply refused to climb up that wall when I tried it, and disappeared into thin-air whenever Mickey reached the top. Only after multiple attempts did I manage to somehow trick Oswald into jumping up there. That is how you deal with Oswald as a solo player. You have to fool him into doing what he’s meant to do.

On other occasions, Oswald played an active role in getting me hurt or killed. If there are ledges that sink into deadly lakes of thinner when stood on, you can bet that Oswald will stand right on the thing and let it sink. At other times, he would jump into me and knock me into the thinner. Perhaps worst of all was a certain boss that Oswald kept saying he’d distract (constantly, because all dialog loops incessantly), so that Mickey could squirt paint at its back. This tactic soon fell apart when it became clear that “distraction” meant “follow Mickey around so the boss is always facing the player.”

And for what? What is so good about co-op that it was worth rendering single-player so unbearable? Nothing. Just a few shoehorned, old-fashioned, enforced cooperative moments where both players have to pull switches, or Mickey holds something open so that Oswald can zap it. The kind of conceited co-op banality that has been injected violently into any sort of game desperate enough to want a popular feature listed on the back of the box but remains too lazy to make that feature do anything meaningful. This kind of crap should not be tolerated anymore. 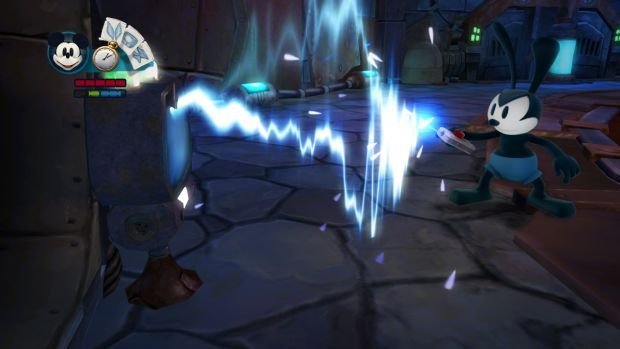 As noted, the camera is about as unhelpful as Oswald is. Not only does it try and remain in a fixed perspective at all times, it’s almost always set at some terrible angle that gives an unclear view of the surroundings. The interface is also dreadful, with both the action and jump commands bound to the same button. This leads to Mickey constantly jumping whenever the player wants him to grab an item or open the many doors that lead to various pointless shops or item-gathering sidequests. Mickey himself is slow, his jumps are pitiful, and his attacks have no precision — especially notable for enemies that require use of thinner and head-stomps, something the uncoordinated, sluggish mouse isn’t properly equipped for.

The Power of Two is a consistently annoying experience. From block puzzles that boast despicable floaty physics to NPC and tutorial dialog that repeats itself obnoxiously, one could be forgiven for thinking that Epic Mickey 2 was designed as a means of interactive psychological torture, built to exasperate enemies of the state into lunacy. Between its unfunny humor, unsatisfyingly brief levels, broken co-op A.I., petulant camera and grotesque voice acting, Epic Mickey 2 is the kind of game that drives sane people mad, and mad people sane.

It can at least be said that the game looks good. It still has the distinctly cute visuals that drive home the missed potential of the original idea, but the bright colors and unmistakable Disney aesthetic look a lot better on an HD console than it did on the Wii. The nostalgic 2D levels bring a measure of obscure charm to the experience, and may be worth seeing for those willing to put up with the suffering required to get there. You’d have to be an insanely loyal Mickey fan, though. 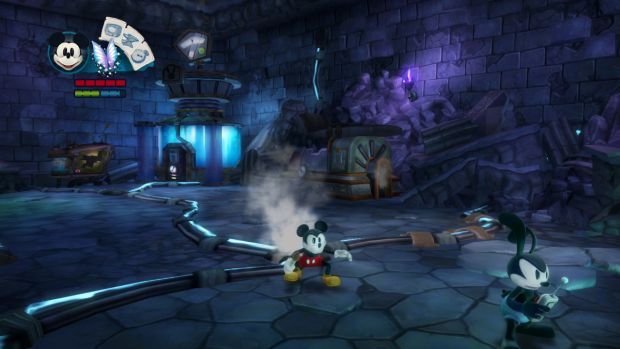 Epic Mickey 2: The Power of Two does nothing to improve itself over its predecessor, repeating old ideas while refusing to fix problems that are glaringly obvious to even the least tasteful of dolts. Anything added in the sequel has been done so to the its overall detriment — the voice acting grates, the musical pretensions are vapid, and the cooperative schtick is corny, strained, and a total intrusion for solo play that slows progress, causes trouble, and does not bloody work.

At least Epic Mickey felt fresh enough that some of its faults could be overlooked by the more forgiving of players. The Power of Two has no such charm to hide behind. It’s a gormless, chafing, unquestionably horrid little waste of time. Only the hardcore Disney obsessive need look into this one, and I don’t advise they look too deeply.