You ever have a cherished old game right on the tip of your tongue? As a ’90s PC kid I got a million of ’em. Thankfully, my memories are often so vivid, that I can remember where I was when I played them, as well as details like the box (usually borrowed jewel case) art.

Urban Assault, a 1998 FPS/RTS hybrid, is one of those games that I bring up often; but no one has ever really seemed to share my passion for it. It was there that my fascination with the overlapping genres began, which had a handful of dalliances over the past few decades.

Disintegration is another brave soul that attempts to meld the two genres, but like its predecessors, it ends up juggling too much. 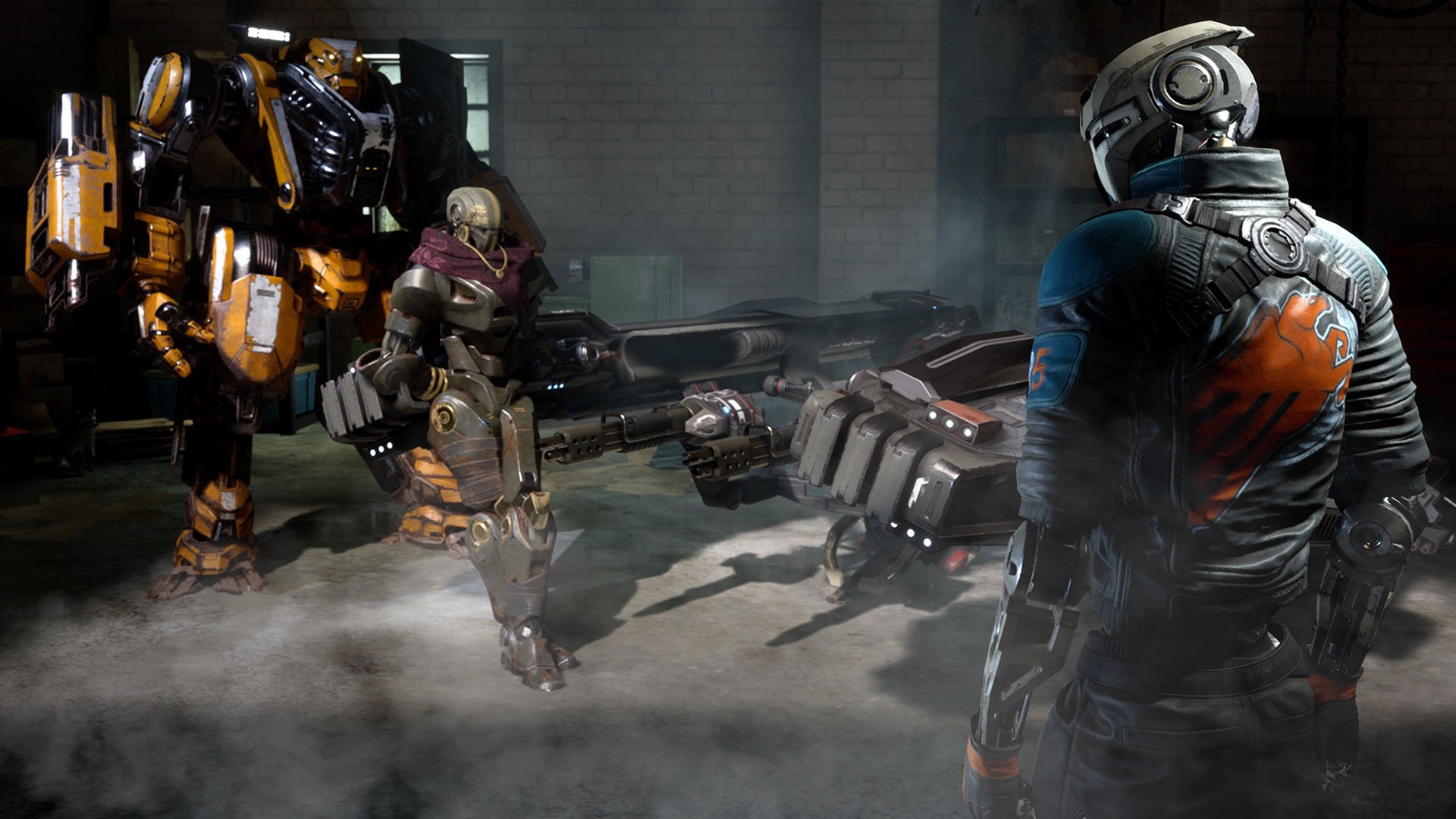 Since there’s a lot of new IP coming and going on the gaming superhighway these days (there’s a new reveal every few days!), I’ll sum this one up quickly: Disintegration‘s world involves robots with human brains transplanted into them, who pilot these flying things called Gravcycles. They blow up stuff and the main character’s name is Romer (not Roamer). Okay, you’re all caught up from the initial reveal. Of course, as the story mode progresses, a lot of V1 Interactive’s style shines through.

The robots aren’t just automatons: they’re sassy. The Gravcycles are also pretty rad, and serve as a clever way to Trojan Horse in the RTS bits. It’s much easier to fly around and order things around with an aerial view, but the key is that said ordering is mainly relegated to just a few NPCs so it never becomes unwieldy. It’s fun to back up your NPC teammates by healing them, or choosing between moving up their position or staying holed up. Triggering NPC abilities (like grenades or mortar fire) is quick and engaging: almost like you’re comboing your own actions in.

Over time in the campaign, the RTS elements do start to fade away and the action foundation takes over. This spills over into the multiplayer portion (more on that later), but the enemies all start to feel homogenized, much like Bungie’s samey Destiny enemies. While the named NPCs and the core cast are unique, the rest are the same part of one giant scrap heap: both aesthetically and tactically.

Targeting can also feel imprecise, exacerbated by shaky enemy AI.  Destructible environments, which have been a selling point since 2001’s Red Faction, are half-hearted. In the grand scheme of things, dealing with jank is a small price to pay for some. Everything runs at a brisk pace, without the bloat of an open world (there’s a small hub that’s mainly for grabbing challenges and having a chat).

I can best sum up the story portion as “fine.” The whole human-to-robot thing is actually pretty rad and I dig the very Earthy style of the environments juxtaposed to all of the high-sci-fi. It gives off a very ’90s PC mech game vibe and V1 Interactive knows the ropes of that aesthetic. To wit, the robots sport some pretty wild character designs as they come in all shapes and sizes. The campaign is mostly the appetizer though, preparing people for the multiplayer main course.

Multiplayer is very interesting in that it takes the “small team NPC” concept from the campaign and injects it into a medium-scale confrontation. I hesitate to call it “large,” as battles feel more tactical in nature, without getting too out of control: think of it like a bunch of players driving Gravcycles around trying to kill each other, with special abilities (NPCs) in the mix. Said abilities can be customized through the use of “crews,” which range from rad robot knights (King’s Guard) and samurai (Lost Ronin); to weird Mad Max adjacent designs (Warhedz) and…robot clowns (Sideshows).

The multiplayer element is a bit daunting, but I’m not talking about from a gameplay perspective. Some of the crews feel more “complete” than others, with the only reason that nine of them exist is to help push the game’s cosmetic microtransaction system (individual skins range from $5-$10 each with in-game credits, which can also be unlocked through gameplay and challenges). The problem is that most of said cosmetics don’t actually look premium in any way, mostly opting for simple palette swaps. 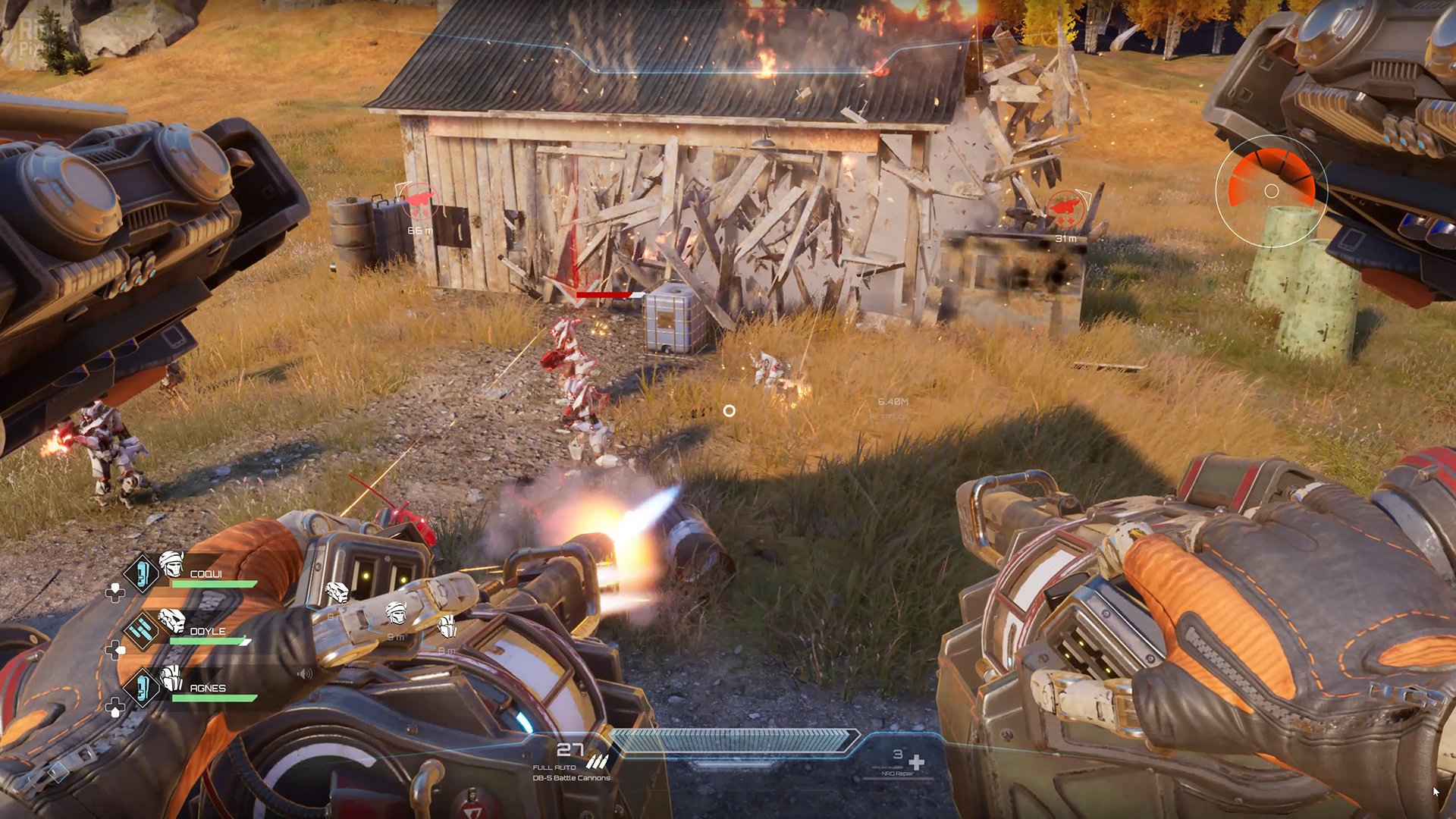 Once you navigate past the store, you have three modes to sift through: zone control (capture the point, you know it), collector (two teams try to grab “cans” from confirmed kills) and retrieval (attack/defend loop, with role swaps). You’ve played all of these before, but the subtly of the RTS mechanics do make zone control a bit more unique, in that you need to capture points with ground units instead of Gravcycles. It’s the mode I enjoyed the most, but the other two also heavily favor direct fights, which is where Disintegration shines the most.

The moment-to-moment action is fun, but like some other recent multiplayer romps where that’s the case, I found it hard to really connect with the world for extended periods of time on multiple levels (the wise-cracking robots aren’t so lively here). I would have vastly preferred a system like Call of Duty, where one could completely customize your Gravcycle to your liking — but instead you’re at the mercy of mostly faceless “crews.” As a result of the setup, Disintegration is in this weird spot where it’s not quite a hero shooter or a traditional one either, making it hard for me to commit for very long after launch. More paid and free DLC is promised, which could change things, but for now it’s struggling to hold my attention.

Disintegration is highly ambitious, and I think that over time a combination of free and paid DLC could shore up some of its weaknesses. Either way, I’m already looking forward to a potential Disintegration 2: this world is worth lingering in.