Despite my lovely knack for sinking my teeth into 100-hour-long JRPGs when I find myself wanting some time to game, the Disgaea series is one that managed to intimidate me, largely after hearing firsthand accounts from fans who have managed to literally put thousands of hours into the games.

Fans of the series, as well as curious onlookers, know the Disgaea series to be synonymous with hardcore grinding that feeds into an obsession with stats and numbers, but I was surprised to find that Disgaea 4: A Promise Unforgotten isn’t arcane or unapproachable. On top of that, the game managed to wholly endear itself to me, elevating it to a level much higher than a typical niche time sink. 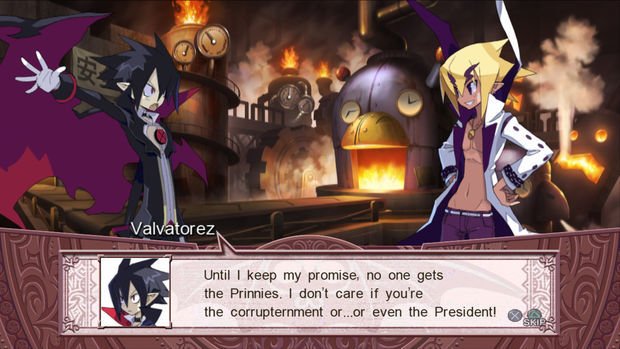 Disgaea 4 eschews the scholastic framework of previous game in the series in favor of a politically themed narrative, centering on a vampire named Valvatorez. Formerly a feared tyrant, Valvatorez has since been demoted to the role of Prinny Instructor in the Netherworld’s prison after losing his power following a vow to cease drinking human blood. A series of events exposes a corrupt scheme in the Netherworld government and Valvatorez is inadvertently set against the government, while his loyal steward Fenrich, a werewolf, uses this opportunity to manufacture a full-blown rebellion with the intent of restoring his lord to the power he once held.

The narrative of Disgaea 4 is independent of previous games in the series, save for some cameo appearances, making this title entirely approachable to newcomers. It’s also interesting without taking itself too seriously. Disgaea 4 is a silly game, as well as a quirky Japanese game, and this is apparent at the onset. Item descriptions are hilarious, I encountered an enemy named “Codblops,” the dialogue references gaming conventions (one character’s goal is becoming a final boss), and Valvatorez is an avid supporter and proponent of the nutritional benefits of sardines. Disgaea 4 is also full of puns. I love puns.

The narrative is out there, but it works and one of the reasons it works is because the game is packed with likeable, well-defined characters. The voice work in the game is good, aiding characterization, and the characters all display a clear development arc that, no matter how expected or obvious, helped endear the characters to me. Even a character introduced later in the game who I felt had the least redeeming value — probably because of his grating voice and (intentionally) awful personality — somehow managed to be humanized by the end. The game is oddly sincere, even when the overall narrative starts dipping into cliché, cheesiness, and absolute insanity. 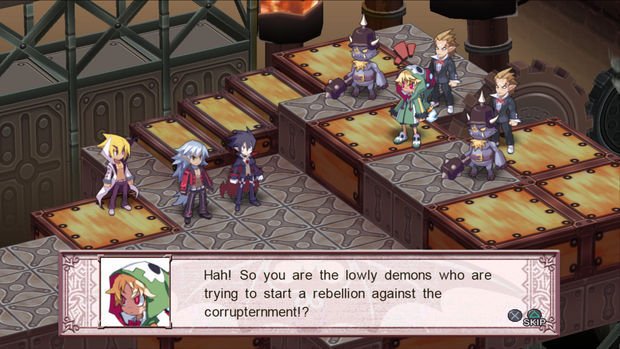 The other neat thing about the narrative is that aspects from it are interwoven with the gameplay. Disgaea 4 features variable endings, for example, but they don’t all come at the “true” end of the game. Losing certain important battles throughout the course of the story, as early on as the chapter following the tutorial, will actually end the game. After one of these undesirable ends, you’re sent back to the beginning, but with the same characters (sans story characters), levels, stats, and equipment that you had when you lost, starting a second “cycle” of the game. It’s not a perfect system. Anyone not in it for the grind would probably rather reload their save than play through the preceding parts again, but it’s definitely an interesting way to handle a divergent narrative.

Of course, the bulk of Disgaea 4 is its gameplay and hitting those level 9999 caps is still very much a thing you can do. It’s a pretty straightforward sprite-based, isometric strategy game played out on a grid system. The crux of the battle system is Geo Blocks, which can alter panels, typically with detrimental and restrictive effects on the party characters. Most of the battles, excluding a handful of larger maps, are predicated on dealing with these artificial restrictions, some of which can be pretty irritating and all of which are entirely arbitrary. Sure, it can force variable strategy on maps, encouraging players to try and use the blocks to their advantage, but it’s hard to ignore that it feels like a rather cheap way to do so. 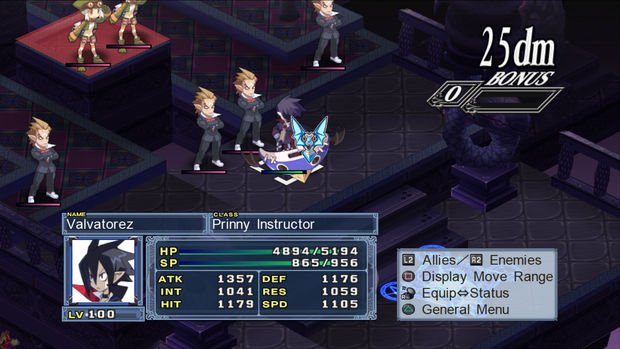 While grinding is one of Disgaea 4’s biggest draws, it’s not essential for making it through the main game. It’s entirely possible to beef up your team to the point where you steam roll the story maps, but less inclined player could conceivably get by most maps without excessive grinding if they play them carefully enough. Of course, there were definitely some that seemed like they could be troublesome, but I fell naturally into a bit of grinding as I got more involved in the game and explored some of the different things it offers.

In addition to playing and replaying the story levels to progress, there’s also a feature called “Item World,” where you can play through successive maps that are literally located within all of the game’s items, in order to power them up. Clearing a set number of levels will allow the item to grow in strength, with rarer items gaining a more significant stat boost and powered up items generally being stronger than a not-bolstered item of a higher tier. There is also a feature that allows you to create your own maps and share them via the PlayStation Network, as well as the ability to create and send pirates to other users’ item worlds to keelhaul them.

The game’s political undertones also come into play in a place called the Cam-pain HQ. It’s effectively a board of individual squares, more of which are unlocked as the story missions are complete, where characters can be placed in close proximity of each other to increase the chances of executing team attacks. You can also place Evil Symbols on the map in order to give certain bonuses the characters that fall within the symbols’ area of effect. From the Cam-pain HQ, at the cost of varying amounts of Mana, you can call the senate to order and attempt to pass resolutions, which range from spawning new party characters to making better items available at the shop to granting new evil symbols. 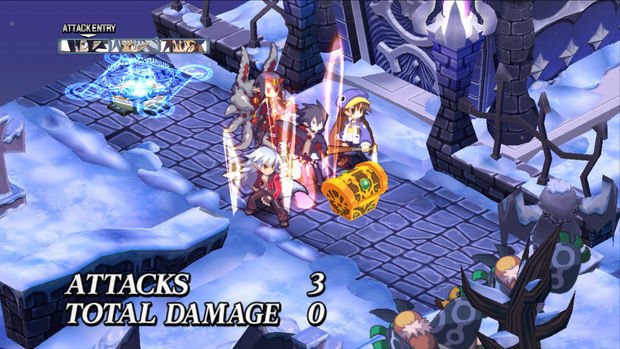 Once a senate session is called, prior to the vote, you can bribe senators with items in an attempt to get them on your side, or you can get them drunk on liquor, put them to sleep with chloroform, or blow them up with a nice bomb. As you progress, your political party grows in power, allowing you to appoint more and more of your party members to cabinet positions, which gives you more guaranteed “yay” votes in the senate, but greasing the wheels of justice never loses its appeal. As silly as it is, I got a strange sense of satisfaction out of bribing senators to pass my resolutions; perhaps it’s just my love of skullduggery seeping through.

Disgaea 4 definitely isn’t for everyone. It’s a 2D, sprite-based title and there isn’t even much detail to be had outside of the character designs (though the vibrant colors are appreciated in today’s monochromatic gaming color palette). The game is also, again, completely absurd and decidedly Japanese. The limited camera angles are occasionally annoying, especially on busy maps, the Geo Block restrictions can be irritating to deal with, and there is mild slowdown in the later stages once you have access to skills that can target about ten panels at once.

That being said, the gameplay is addictive, especially for fans of the turn-based strategy and JRPG genres, and there is a massive amount of content to wade through — the post-game is filled with inordinately powerful bosses and extra missions. More importantly, Disgaea 4 has a certain charm about it, largely thanks to its refreshing levity and likeable cast, which adds to the game’s overall appeal considerably.

Disgaea 4 has a clear sense of self and it embraces all of its absurdities, presenting them in a surprisingly palatable package, whether you choose just to get your feet wet or dive all the way into the brimming time sink.