Call me crazy, but I mixed up the titles for Deus Ex: Human Revolution and Mankind Divided so many times during this review process, it’s unfathomable. I mean, they’re very similar games, both have very similar artwork and generic names, and they’re littered with promotional materials featuring the same protagonist. They even have the same goldenrod (or is it puce?) title screens.

But I finally figured it out — the citizens had a revolution, and now they are divided. That’s easy to remember, right? 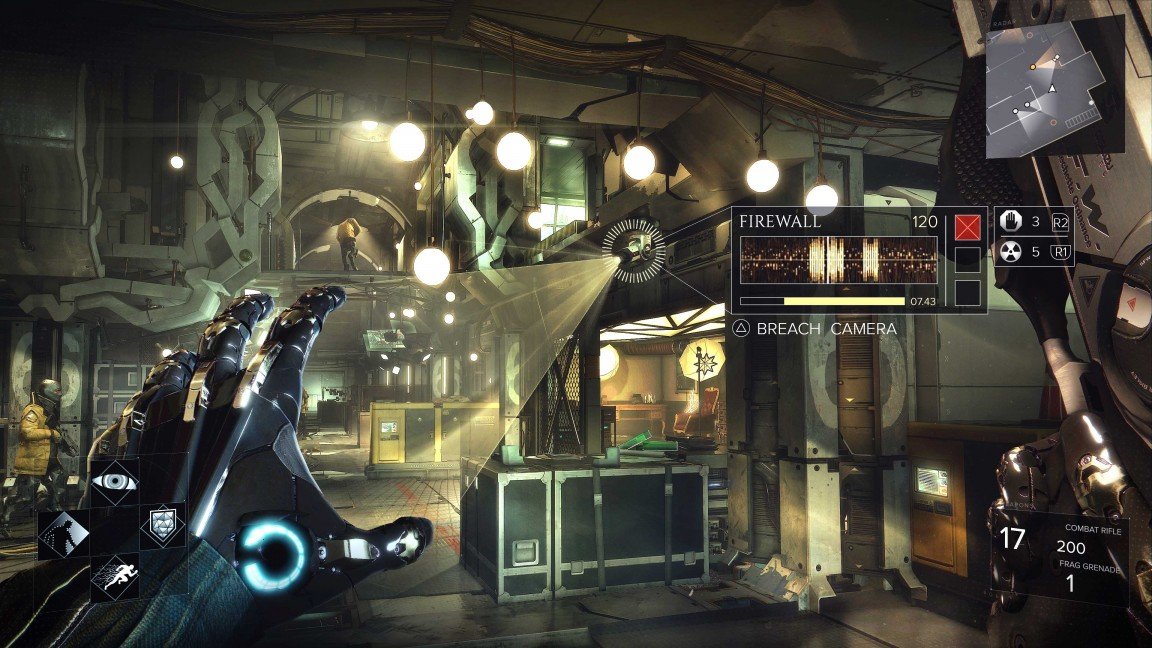 So let’s recap a bit, since the Deus Ex timeline can get a little confusing now that Square Enix has delved into the “multimedia franchise” angle of things. Let me take you back to 2027, where it all began — shit went down, and now humans and augmented humans (cyborgs) hate each other because of a cataclysmic event where augs went crazy due to a glitch and started attacking people. That’s basically all you need to know, because Adam Jensen is still Batman, he just works in counter-terrorism at the moment.

It’s…an okay commentary on segregation all told, but one I mostly saw unfolding behind the scenes. The course of the narrative as it involves Jensen is fine, but I’m not really a fan of the setup. It’s going for a Metal Gear vibe this time around with realistic imagery spliced into cutscenes, with a mixed impact. The “darker” (but not necessarily edgier) turn doesn’t really help things, but it doesn’t exactly hurt it either. What do I mean by that?

Well, what I really like about the implications of humans versus augs is how it affects you, the player, and specifically Jensen. As you can clearly see from just about every picture of him, he’s an aug, so the way the AI interacts with you is markedly different from most games. Typically you’re either in the role of a standard hero, “Overlord”-style mustache-twirling villain, or a tried-and-true anti-hero that’s basically the former in new clothes, but much like the Witcher series, the team at Eidos manages to make him feel morally grey.

We also get to explore the character more in general, and they found a neat little way to explain away the “Mega Man problem” of upgrades — where you were completely badass in the previous game and are now cut down to size. Near the start, it’s explained that Jensen has some “hidden augmentations” that were implanted in him by a mysterious entity — something that becomes a major plot point and a way to make excuses for new abilities like swords that come out of your hand and teleportation dashes. There’s also a strategic element to the new system too, as you’ll have to disable skills to make room for these new ones.

As a shooter, it has a nice action-RPG groove to it. With all of its moving parts you’d assume it would be clunky, but the platforming sticks very well, and aiming feels tight. You can swap out each individual aspect of the HUD on PC, and there’s several nice custom control schemes for both FPS and action fans. You can also still throw a giant trash can at someone’s groin and see through walls. Did I mention how open the skill options are?

The world is still weird, and still interesting. The newscaster looks straight out of Hunger Games — some real Caesar Flickerman shit. I dig it. I like that amid this attempt to make the setting “matter” more, you can still get plenty of silliness. Even from the start, with its Doom-like difficulty levels, the team lets you know what you’re in for. Jensen is still a mythical demi-god, and at this point, probably a superhero. If you thought Chris punching through a boulder in Resident Evil 5 was silly, wait until you see Jensen dive 100 feet off of a building and punch someone through a wall with electric fists.

As usual, there’s also some role-playing involved, and you can take the more silent or book-smart approach. Your choices don’t have a silly “so-and-so will remember this” prompt and actually feel like they matter, at least in the short-term. You can even chill at Jensen’s apartment, read a few magazines, and listen to music. It’s not a truly open game but it doesn’t need to be, as each section feels meaningfully connected.

The presentation is sleek as hell, reminding me of a slightly busier Dead Space. Mankind Divided‘s tech permeates through every menu screen, and every in-game UI. Messing around with Jensen’s smart home on his console and getting passwords by way of social engineering methods aren’t afterthoughts, nor are the (usually hokey) hacking minigames. There is one caveat, though — I had some technical issues on PC with an Nvidia graphics card. No major crashes but a few brief lock-ups and longer load times, which Eidos is reportedly working on. Other than that, I didn’t have any problems on my end, but it’s something to be aware of. 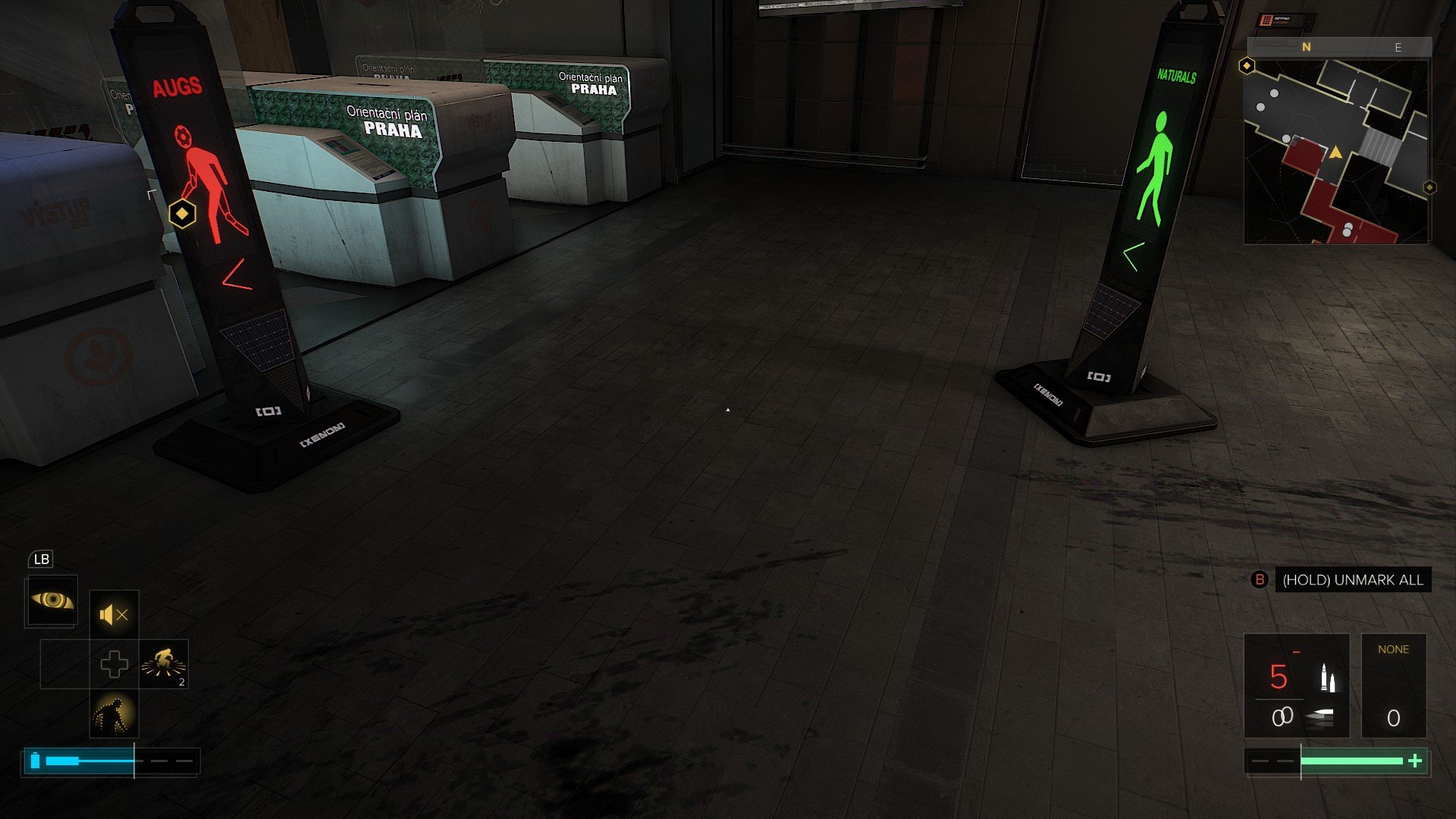 I’ve seen some people get angry over the new Breach mode because it possibly influenced the delay of the core game, but I think they will dig it once they actually play it. Once you get past the inane term of “Rippers” as more organic hackers, it plays out like a classic arcade-like gametype that serves its purpose. The gist is that you’ll be navigating playgrounds full of enemies and hazards, while opening up doors that function as logic puzzles before making your way to data nodes and, eventually, the goal.

And since it uses the game concepts as when you’re controlling Jensen (with similar digitized weapons and augmentation abilities), it’s easy to acclimate to and it can serve as a tutorial for the campaign. One last thing — I’d be remiss to mention that it does have pointless microtransactions linked to consumables. I don’t like that they’re there, but I didn’t even notice them until I fiddled through the menus after a bunch of runs.

Deus Ex: Mankind Divided doesn’t succeed in making me care about the plight of humans and augs, but it still pulled me into its compelling cloak-and-dagger world where people in capes can turn invisible and shoot balls of lightning out of their arm. Oh, and your aug doctor looks just like Prince, so it’s in the running for GOTY.