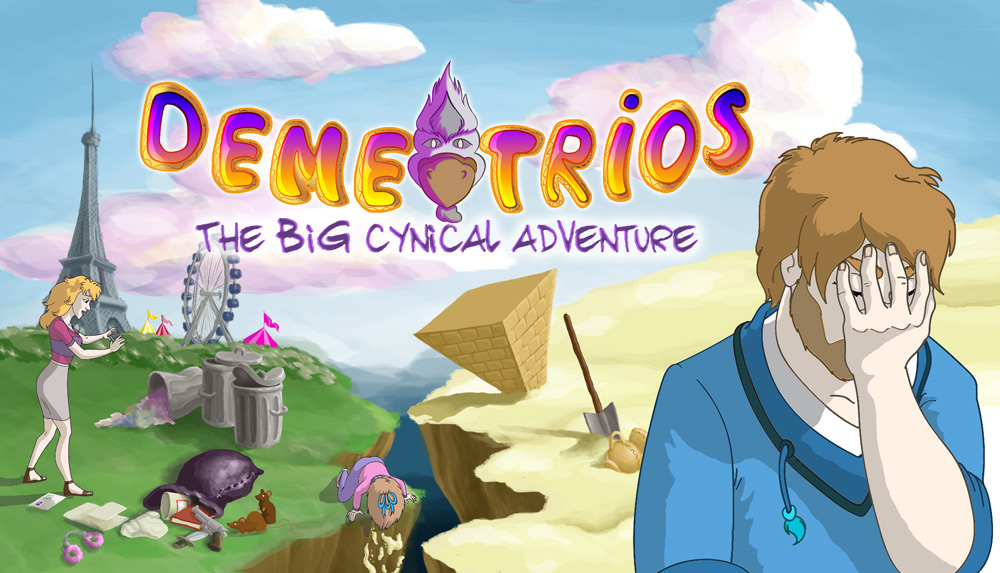 There’s something admirable about a single person creating a work of art. Be it a film, a song, a piece of animation, or a video game, you have to respect the vision and work ethic of these individuals who do by themselves what teams of hundreds sometimes fail to see to fruition.

Demetrios: The Big Cynical Adventure is the work of mostly one man, Fabrice Breton. Released earlier this year on Steam, it’s now out on the PlayStation Vita, giving a new audience the opportunity to see just what’s possible when one person follows their passion and creates a game that might have you saying, “Did I really just spend money on that?” 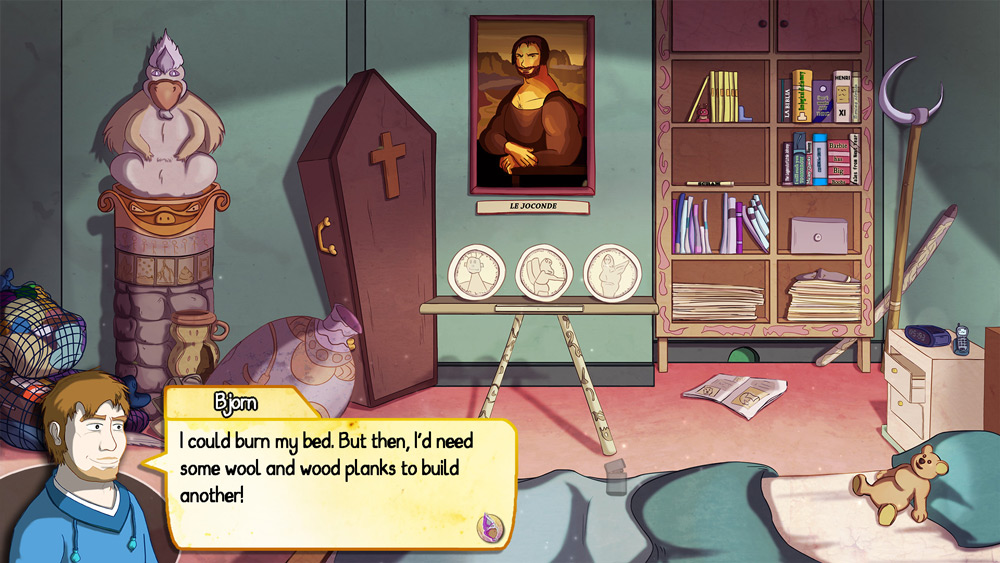 Demetrios: The Big Cynical Adventure is a classic style point-and-click adventure game that aims to answer the age-old question I just made up: will people play a game with zero likeable characters? Set in France, you play as Bjorn, a perpetually broke idiot art dealer who somehow has his own business, complete with a brick-and-mortar store. After a night of heavy drinking, Bjorn is assaulted in his apartment and a stone tablet of his is stolen. The next day starts an adventure that will take him, his neighbor Sandra, and her daughter Caroline to exotic places as they try to solve the mystery of Bjorn’s attack and just what makes this tablet so special.

Like the classic adventure games of yore, you’ll spend your time in Demetrios talking to characters and scanning environments for clues and tools you’ll need to progress. With touch controls, checking your environment is seamless. Pressing your finger on the screen will zoom in to give you a clearer look. The art here is different from any other game I’ve played and that’s a good thing. The aesthetic is bright, colorful, and occasionally disgusting.

It’s important to scan the scenery carefully because that’s how you’ll find cookies. These work like the hint coins from the Professor Layton series and there were a few puzzles where I had to rely on them to figure out the solution. Some of those were because I was dumb and missed an obvious answer, but others tended to have more obtuse solutions. It’s nice that tools you collect can have multiple uses, but some of the uses I would have never figured out without just simply using each tool in my inventory to see what works. Answers should be logical and a few here just weren’t. The difficulty of puzzles also takes a nose-dive right at the end, bringing you to the finish line on kind of a low note.

When I said there were no likeable characters in this game, that wasn’t an exaggeration. Sure, there are some kooks you’ll meet on your quest, but those are all bit players. The main cast is just awful. Bjorn is abrasive, Sandra feels like a bad mix of four unappealing female character traits, and sweet, little Caroline is supposed to be something of a mischievous, bratty kid but instead she comes off as just a bitch. And no, I do not have any qualms about calling an eight-year-old girl a bitch. I think the back-and-forth between her and Bjorn was supposed to be comedic, but it almost always fell flat.

If the game has one thing going for it, it’s that it’s weird. There are so many oddities to be found that I just kept playing to see what would come next. There are carnies that will kill you or kiss you, purple Eiffel Tower vibrators, shots at Nathan Drake and the Uncharted series, UFOs, and many ridiculous deaths to unlock. Death doesn’t set you back too much as once you restart you’re taken right back to where you made the choice that led to your demise, so you’re never out of the action for that long.

It’s a good thing the story embraces its weirdness (as well as its crude, scatological humor) because if you strip all that away, it’s not that good of a story. The villain is figured out far too early, there is no character development to be seen, and the ending I got, while a bit humorous, left me thinking the previous 10 hours had been all for nought.

The big adventure of Demetrios isn’t all that cynical, but it certainly is forgettable. I can’t say the game is bad, because it’s not, but also I certainly wouldn’t tell you it’s good. Instead, it’s nothing more than a name added to a list of titles I’ve beaten, and it will never be anything more than that.