Learning to live with loss

We’ve seen lots of zombie survival games, and plenty of experiences that build on the classic Oregon Trail formula with one gimmick or another. Heck, there have even been titles that combine the two.

But there is only one zombie road trip simulator I know of that let’s a pair of ordinary, oddly-named survivors team up with Link and Garfield as they make the long trek from Florida to Ontario, Canada. 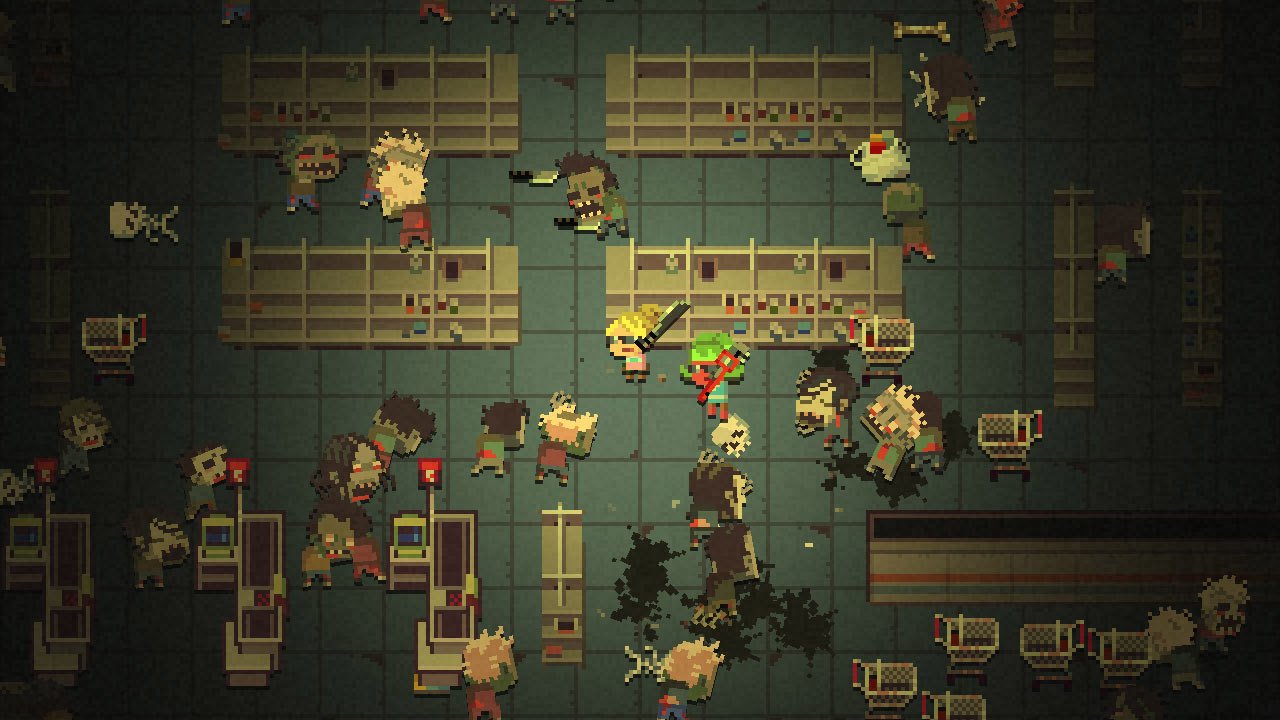 Death Road to Canada is aptly named. You will die a lot, even with street smarts, and even with luck on your side. The two-week journey up to the border is an arduous one full of broken-down cars, run-ins with overly-greedy bandits, and a continual lack of fundamental supplies. This is one of those games where reaching the end will feel like an honest-to-god accomplishment. But even if your rag-tag squad never does make it to Canada, there’s quite a bit to enjoy here. Failure can be fun and funny.

Straight away, the music will hit you hard. It’s so dang good! And in a way that’s chirpy, contagious, and memorable. Its upbeat personality shouldn’t work in a world drenched in despair, but it does, and it gives off this wonderful, polished first impression that extends to the rest of the game.

The basic loop for each run (this is a roguelike with permadeath, so check out now if you’ve had your fill) will have you rummaging through locations for food, gasoline, medkits, and weapons. You can start with two survivors — modeled and named after your real-world friends and family for maximum hilarity, or randomized if you’d prefer — and later recruit up to two more along the way. Some of the characters you’ll bump into are more blatantly inspired by popular culture than others, and they’ll have varying backgrounds, skills, and moods that you’ll want to keep in mind when decision-making.

The action side of Death Road is supremely basic, but there’s enough weight and crunch to baseball bat swings and hunting rifle shots that the combat feels satisfying, never dull. Most of the time, though, you’re better off strategically side-stepping the slow-moving hordes to conserve ammo and your breakable makeshift weapons. No one zombie is ever a serious threat, but when they group up to ensnare you from all angles, they can put you or your player-controlled companions down fast. That’s especially true during extra-dangerous “Siege” events. They’re kind of the worst. Should one of these unskippable sequences pop up, you’ll have to ride out the clock for a set amount of time in what is usually a too-small area that becomes increasingly flooded with the undead masses. Good luck.

Once you’ve found everything you care to pick up in an area (or survived a siege, god willing), you’ll head back to your car, assuming you even have a car, and hit the road. At this point, the other half of the game — the interactive-fiction portion — kicks in. It’s smart, self-aware, and frequently surprising, which are all things I was hoping for, though it can also frustrate given the permadeath stakes.

Much of the time, Death Road to Canada is a whole lot of reading and reacting as text-based encounters unfold and you’re left either accepting your horrid fate (a feral cat clawed up your favorite dude and he got hurt! well… shit!) or choosing what you desperately hope is the best response to a multiple-choice scenario. Sometimes, depending on the old random-number generator and your party’s backgrounds and mental states, there seemingly is no right answer. That can be tough to accept.

You might, for instance, happen upon a portal of questionable origin that a single crew member can enter. Who should go in? Should anyone? There’s only one way to find out. It can take many failed playthroughs before you start to see repeat events. Until then, it’s part intuition, part luck. 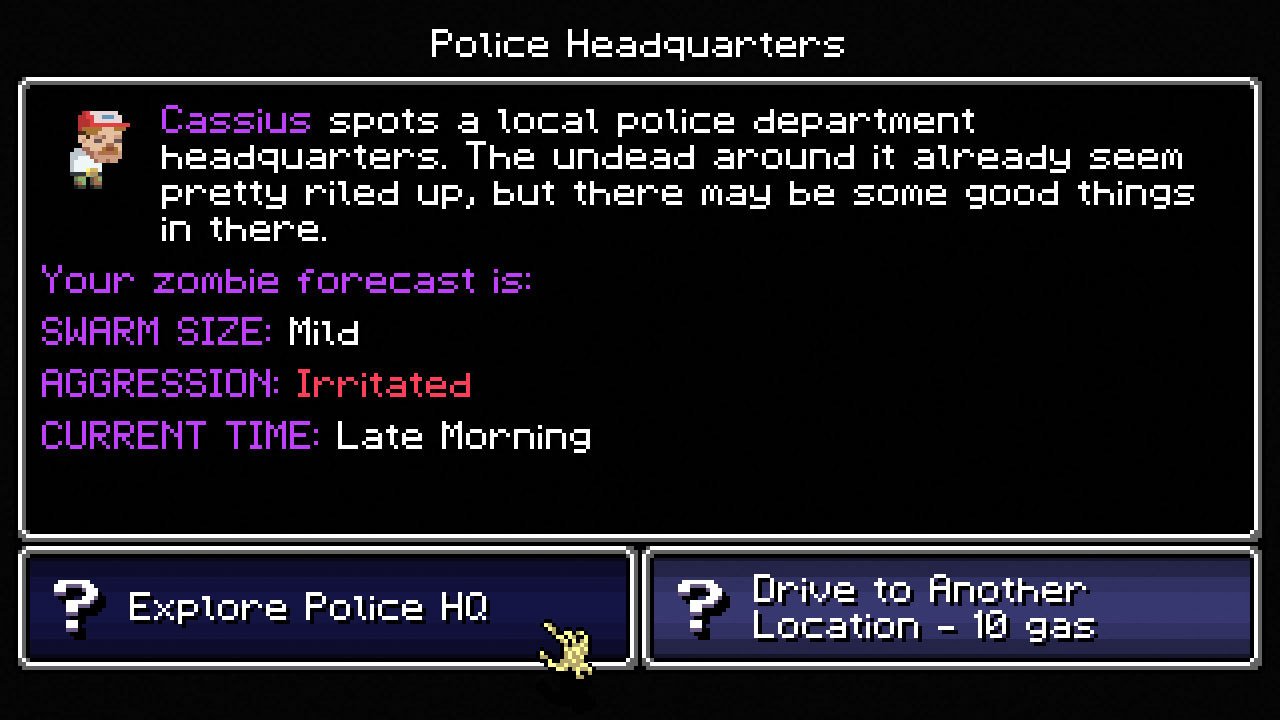 I have found that the game is at its best when you’re able to mostly sit back and enjoy the ride, win or lose, rather than try to consciously, obsessively make the “right” choices to reach the Canadian border.

Without knowing exactly what number-crunching and stat-managing is going on behind the scenes, the RNG feels capable of viciously screwing you over from time to time without recourse. Successful runs can fall apart in an instant, whether you’re in a simple text menu when unexpected bad news strikes, or you’re forced into a crowded tunnel in search of a new vehicle because your current car has decided to suddenly stop functioning right as you’re fresh out of worthwhile weapons.

One of my most entertaining, most heartbreaking playthroughs involved picking up a stray dog early on. After losing my starting duo, I had no choice but to give the pup total control of the party and, hilariously, the steering wheel. What a leader. He was able to chat up and recruit a world-famous luchador only to lose him on the same day, then persevere alone for much of the journey. With a few days left to go, he had to pass the torch to a younger, more capable wrench-carrying pooch. Canada was within our grasp. This could be it! Then, right on cue, a worrisome text encounter reared its head: an injured moose blocked the way forward. What should I do? Uh, uhh, heal it, obviously!

“Corlis forgot that there were no medical supplies! The moose appreciates the gesture anyway, so it only mauls her half as hard for getting close.”

And that’s why they call it Death Road to Canada. It can be too harsh for its own good, and folks who are tired of roguelikes will struggle to embrace that part of the design, but it’s still one of the better road-trip games I’ve played thanks to its cheerful personality, amusing writing, and all-around charm.