I didn’t always like the Dead Rising series. Far from it, actually.

My dour experience with the original wasn’t exactly out of the ordinary given its rough edges. I liked the concept, particularly back in 2006, of an open-world zombie game that didn’t take itself too seriously. One that was comfortable enough with itself to be flat-out ridiculous when the situation called for it.

The idea of Dead Rising always seemed great to me, but the actual experience of playing it? Not so much. It just didn’t click. I’m not sure if it was the infamous prisoner sequence or the time crunch or some other annoyance, but I couldn’t get into the game, so I swore off it forever. End of story.

Except, then Dead Rising 2 came along. Its standalone prequel, Case Zero, looked condensed enough and as a result low-risk enough that I decided to try it out. And by god, it worked! I finally “got it.” I had the right mindset needed to enjoy this series, and that adoration bleed back to the original game, then straight into the sequel. Now, all these years later, here I am reliving the Las Vegas undead survival adventure with Capcom’s re-release of Dead Rising 2 for PlayStation 4 and Xbox One. 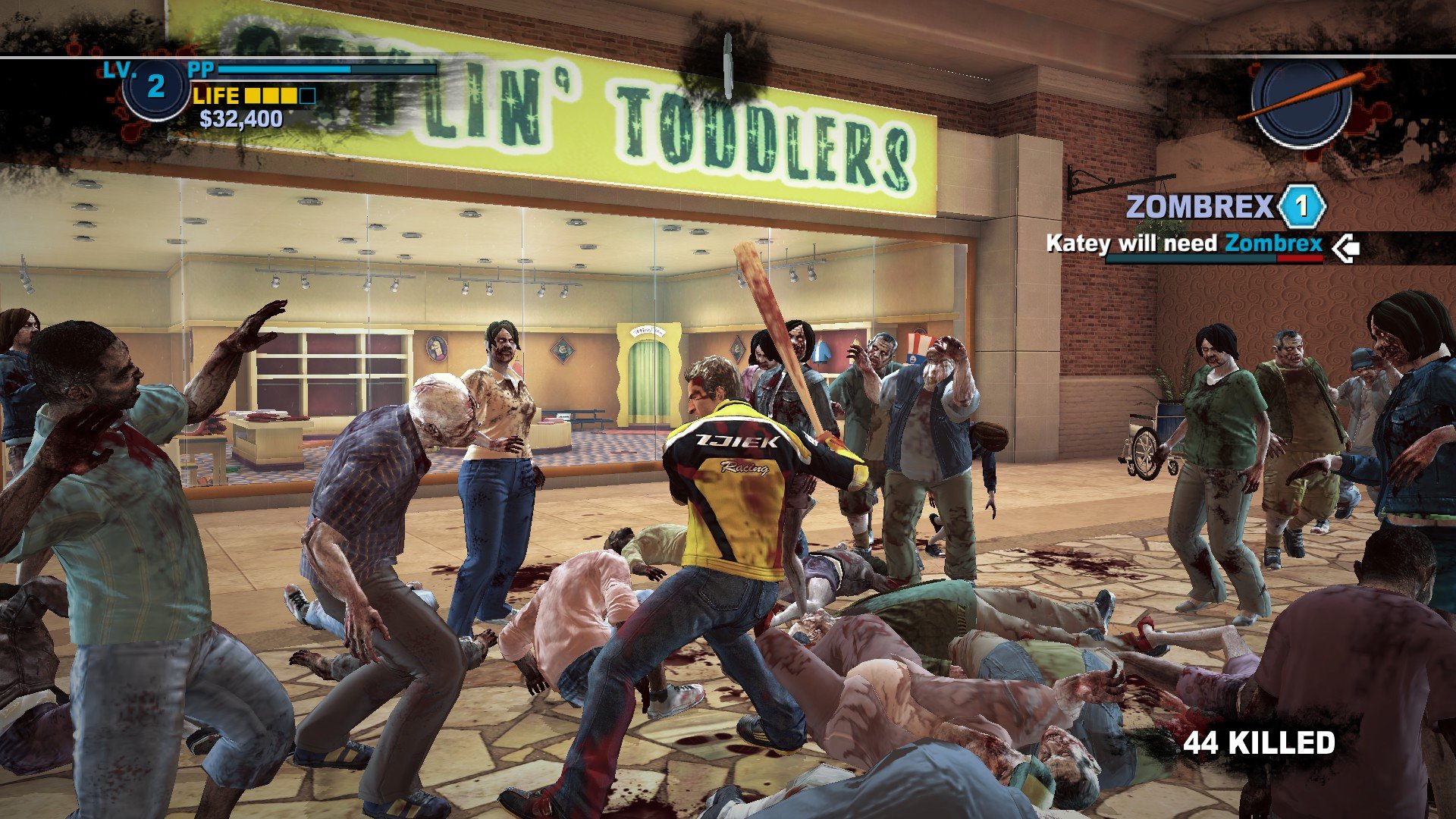 The remaster of Dead Rising 2 is about as basic as they come. It strives for (and usually hits) 1080p at 60 frames per second, which might not sound impressive, but I don’t think it needs to.

Essentially, these current-gen console ports are what PC players have had for years. If you liked or didn’t like the game before, your opinion won’t change either way merely because it looks crisper and runs better. So, set your expectations accordingly. My big takeaway from replaying Dead Rising 2 is that I still (mostly) love it in 2016. Much of this arcadey-feeling action game holds up well, and that’s a relief.

The protagonist, single parent Chuck Greene, has compelling story motivations. He’s a motocross champ turned killer-game-show contestant who’s in it not for fame and glory, but to afford costly Zombrex medication for his infected young daughter, and now he’s been framed for a zombie outbreak.

The true star of Dead Rising 2, however, is its setting, Fortune City. The sprawling resort is made up of malls, casinos, plazas, and a hotel, and it’s such a conducive place for having fun in the post-apocalypse. I was amazed by how quickly the different zones and the interconnected layout came back to me, whether I was outside running down zombies with my bike on the Platinum Strip, or trying my damnedest to tame a ferocious show tiger with steaks in the Yucatan Casino. Y’know, dad stuff.

Once you get an adequate lay of the land, the rest of the pieces fall into place. That’s when you can truly enjoy Dead Rising 2 in spite of its brisk pace and time-limited mission design, which may initially feel overwhelming. With confidence, and especially with more maneuvers and inventory slots under your belt, it’s no longer this ordeal to escort survivors back to the safe house, or to find public restrooms (save points), or to stock up on nourishing orange juice or knives and boxing gloves with which to craft the super-cheap but entirely necessary Wolverine-esque “Knife Gloves.” Those elements exist for a reason — they provide some tension, some resistance, to keep the sandbox from growing stale.

With all that said, gosh do I still loathe the psychopaths. I don’t find these fights to be a rewarding challenge in the slightest. Win or lose, prepared or unprepared, they’re just a pain in the ass. Dead Rising 2‘s melee and ranged combat works well when you’re slapping electrified Blanka masks on zombie heads, chucking explosive footballs into the horde, or just plain screwing around, but it falls apart when you’re fighting against crazies who might as well be hiding a hyperalloy under their supposedly human flesh. A special spot in hell is reserved for the next-to-last boss, whose absurdly long invincibility frames and all-around ability to take a beating are the stuff of nightmares.

But for as uneven as that specific slice of Dead Rising 2 can be, the rest of the experience shines, even today. It’s one of those games that pays back the time you invest into it at least double fold. Returning players won’t find anything substantially new in this remaster aside from sharper image quality and better performance, but given the budget pricing here, that’s a perfectly reasonable offer.