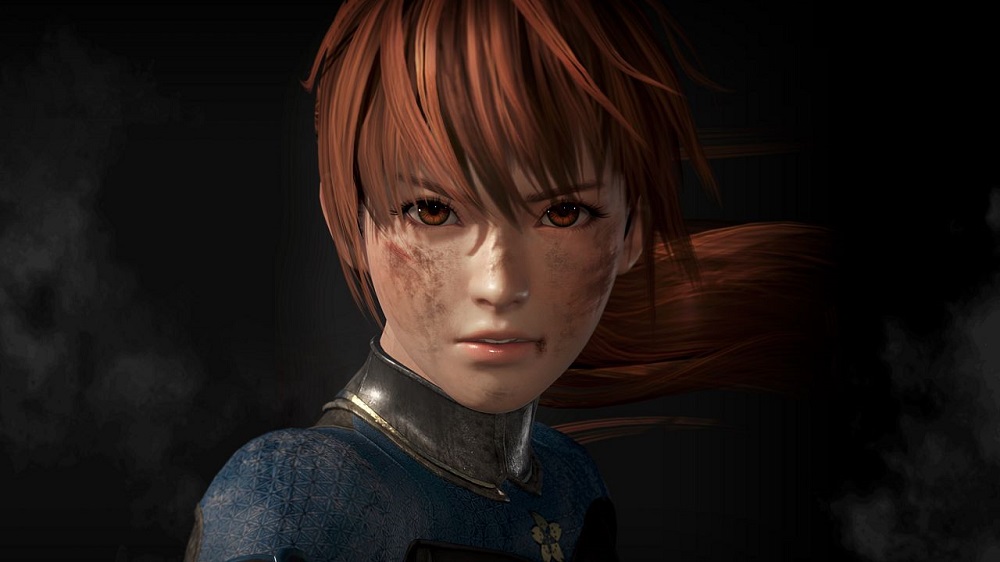 I first became aware of Dead or Alive thanks to the ill-fated Sega Saturn Magazine, which once sported a cover image of pro-wrestler Tina, while huge text declared “FOXY BATTLING BABEFEST!” From day one, DoA had found its hook, something to set it apart from competition like Sega’s Virtua Fighter and Namco’s Tekken, the latter of which still rules the 3D fighting genre today.

Decades have passed since then. We’re currently in an experimental era for fighting games, with everyone trying new ideas and concepts. Whether it’s Mortal Kombat‘s cinematic storytelling, Street Fighter‘s obsession with the eSports scene, King of Fighters‘ venture into 2.5D, Arc System Works’ anime crossover chaos or, bafflingly, Tekken bringing in guest stars from The Walking Dead.

Perhaps realising the need for change, Team Ninja announced last year they’d be taking a new tack with their own franchise. It’s time for Dead or Alive to be taken seriously as a fighter, they said. Enough of the cheesecake bouncing boobs, panty shots, and doe-eyed lolis. This would be a new Dead or Alive – for a new world of core values – marketed proudly with the slogan “Fierce Fighting Entertainment.”

Not really. As Yogi Berra once said: “It’s deja vu all over again.” 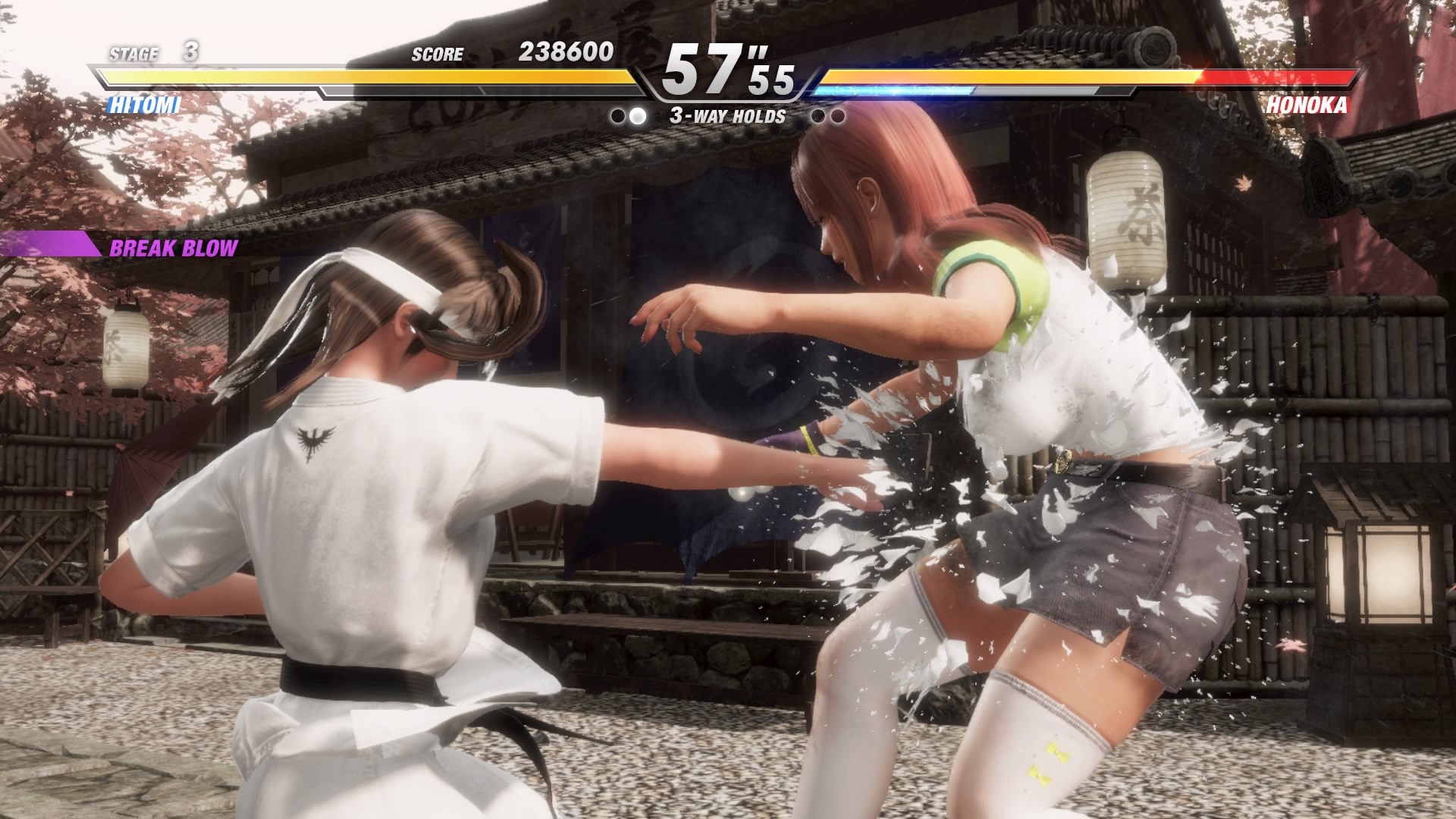 For those not-versed in Dead or Alive, it’s a 3D fighting game which places emphasis on speed and prediction. Still one of the fastest punch-ups on the market, DoA rewards split-second timing and the ability to capitalise on reading your opponent. The latter comes in the form of DoA‘s “Triangle System” which uses “Holds” (essentially counters) to reverse enemy attacks, turning the fight in your favour. This forces good players to constantly switch up their combos, mixing high, low, and mid-attacks – along with throws – to prevent being read. It’s a great system, making for satisfying psychological combat.

DoA 6‘s “Fierce Fighting Entertainment” remains solid. Brawls are quick, exciting affairs, rewarding players for their character knowledge and smart adaptation. As is the case for many modern fighters, DoA 6 introduces a new One-Button-Super mechanic where, once the Break meter is filled, mashing a designated button performs an auto-combo, leading to a pretty underwhelming final blow. Accompanying this is also a “catch-all” version of Holds, where players can spend meter to perform a counter that will reverse all forms of incoming strike. These new mechanics will be useful for newer players but, like Tekken 7 and Soulcalibur VI‘s similar “simplified” specials, can lead to a paranoid online playstyle, occasionally breaking fight flow.

The new graphics engine steps up the flesh tones, hair, and facial details, as well as the sweat, dust, and dirt effects, of which Team Ninja are rightfully proud. While it’s fair to say that DoA has improved its visual appearance, this also comes at the behest of performance, with the PS4 edition featuring occasional slowdown whenever the camera swings around to showcase throws or supers. It’s very noticeable on certain stages, and particularly during Survival mode. It goes without saying that framerate drops in a fighting game are at the top of the no-no list.

In terms of content, DoA 6 is overwhelmingly by-the-numbers. Save for two new stars – nerd-girl NiCO and hot-head Diego – the roster is the same (now missing Rachel and the Virtua Fighter stars). Our heroes are all rocking mostly unchanged outfits, movesets, and taunts. A bunch of the unlockable costumes available here also featured in DoA 5. When it comes to stages, it doesn’t take too long for brows to furrow in familiarity. There’s a downtown gym, a stream in a forest, a cobble-stoned temple, a “cyber” room with an electric floor, a wrestling arena with an electrified ring. These have all been designed from scratch, but are essentially remakes from DoA 5. As the ultimate punch-line, there’s even a museum arena specifically designed to be a compendium of previous stages.

This leads to Dead or Alive 6‘s biggest and most notable problem, one that permeates the entire experience: There’s no convincing evidence that any real progression has been made from Dead or Alive 5: Last Round, a now four-year-old expansion of a game that originally launched in 2012. Sure, the graphics have had a revamp, but otherwise it’s the same bland, cheese-metal soundtrack, the same roster – with barely-changed movesets and costumes – the same mechanics, stages, even unlockables. There are exceptions – such as the excellent sunken galleon stage – but practically everything in DoA 6 is instantly, overly, familiar.

By the end of my first couple of hours with the game, my excitement had dissipated. I realised that I was merely going through the same motions that I have been for years with DoA 5. Why shouldn’t I? There’s nothing new here to really sink into. It’s just… more Dead or Alive. 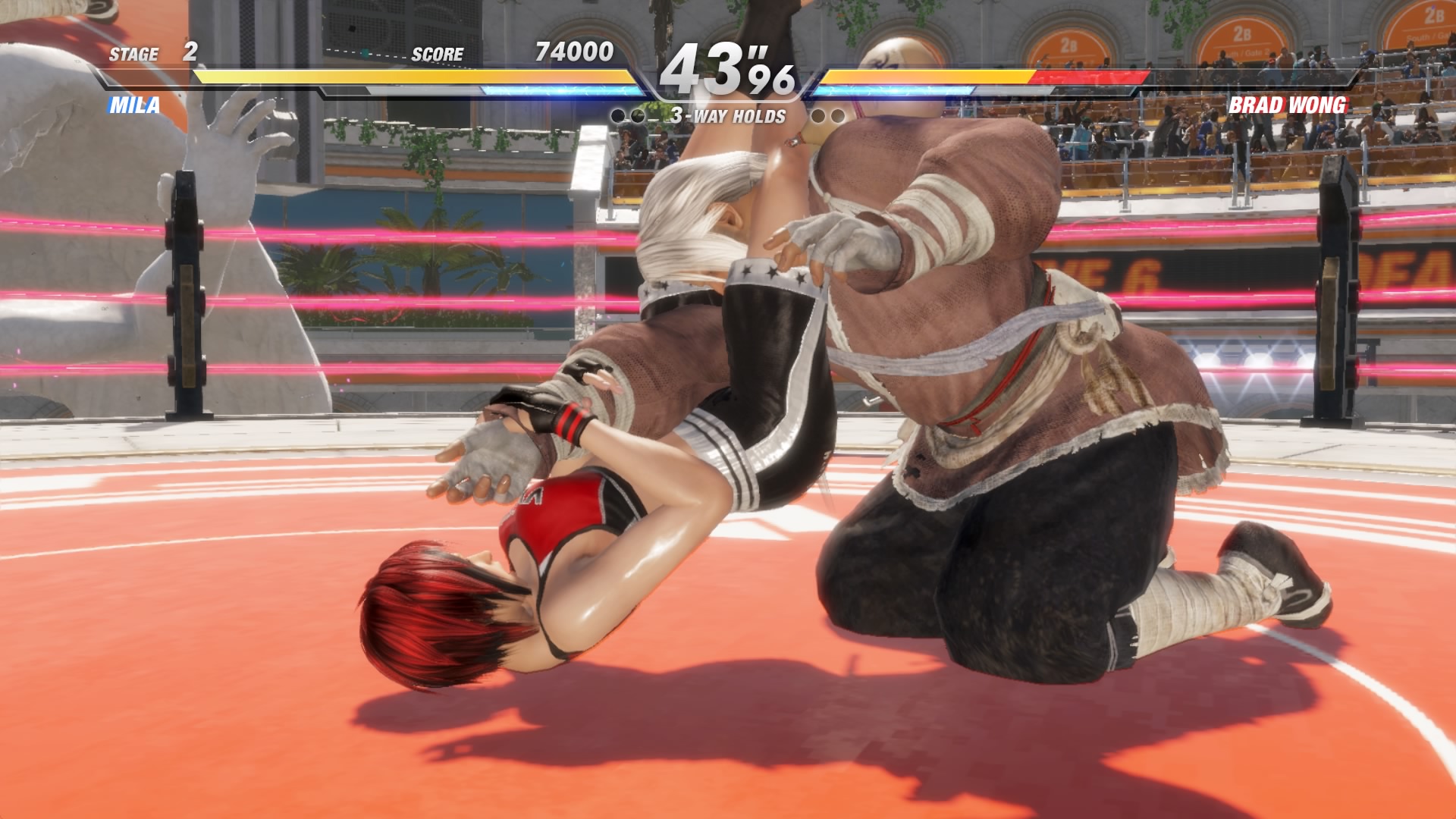 Fortunately, alongside the returning Arcade, Time Attack, Survival, and Training modes come two new distractions. Combo Trials let you get to grips with each character, while DoA Quest offers a series of nearly 100 fights with multiple objectives. The best addition in DoA 6, DoA Quest gives players a basic costume-unlock grind, while teaching the intricacies of side-stepping, holds, counters, and throws. Unfortunately, Tag Mode is entirely absent. As much as DoA 6 adds, it removes.

Rounding out single player is another dreadful Story Mode, which is once again comprised of a hodge-podge of clunky 20-second cutscenes, interspersed with single-round fights. The story and chronology of this narrative is all over the place, and whilst it isn’t quite as intolerable as Street Fighter V‘s effort, DoA‘s story mode is drab and lifeless.

While I was unable to try the online portion of the final release, I’m sure fans have put time into the recent demo, which should give you an idea of how DoA 6 performs online. The second demo, which ran just last week, showed huge improvements in stability over the first, and hopefully this will be improved further for release day. At present, only Ranked Play is available, lobbies will be added at a later date. That’s not the only thing being added down the line, however, as day one also sees the start of a heavy character and costume DLC plan, headed up with an initial, disgusting, ninety dollar season pass. 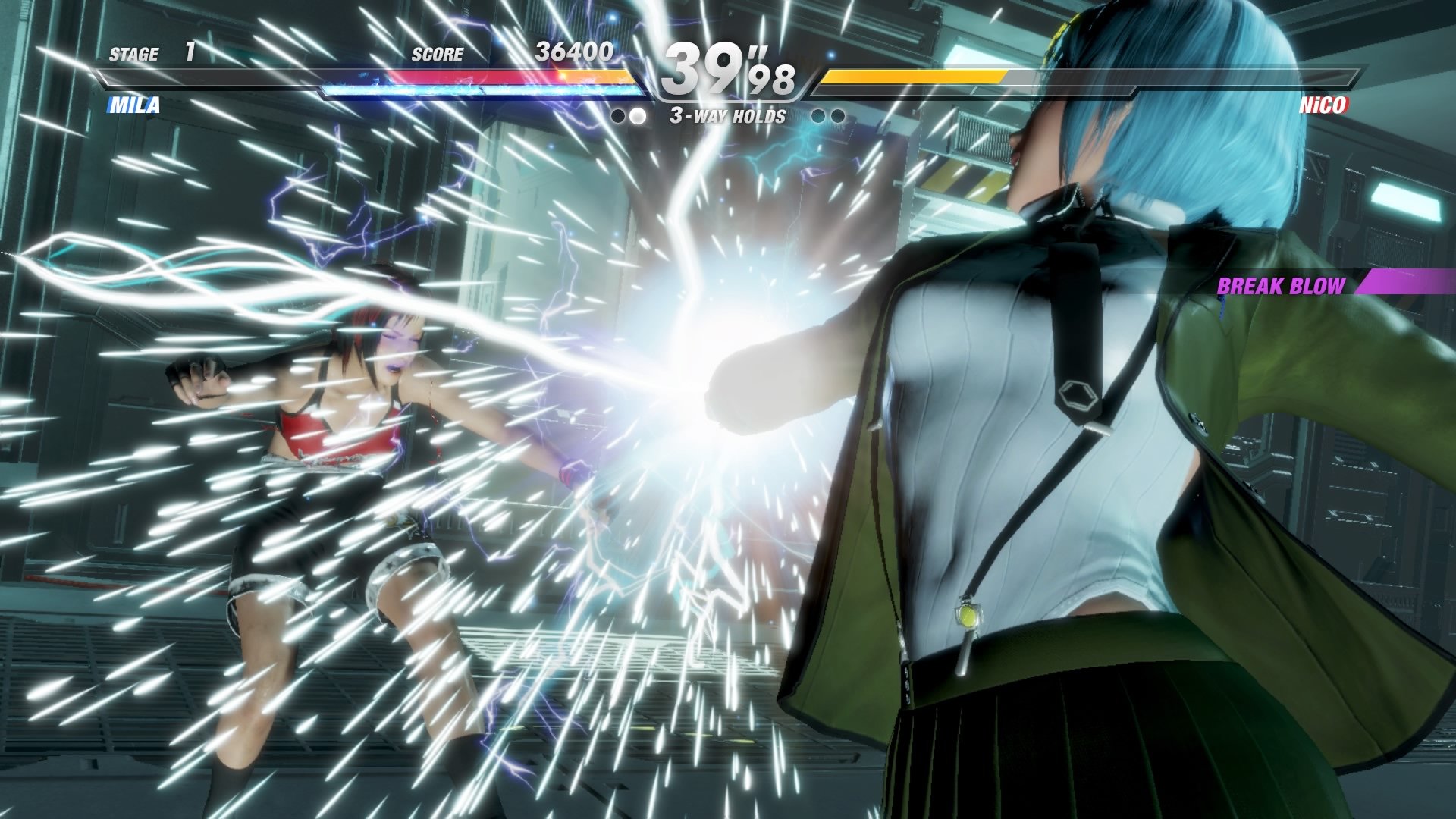 Dead or Alive 6, just like its earlier entries, fights a good fight, that’s not in question here. But adding a one-button combo system and rubbing more soil into character’s faces does not a sequel make. Look at Street Fighter IV to Street Fighter V, or Mortal Kombat Armageddon to Mortal Kombat IX. These are sequels. These titles feature aesthetic changes, roster shake-ups, and entirely new gameplay mechanics. These games experiment with character designs, stages, and new audio/visual styles. They take risks. Not everything hits, of course, but progress is attempted, and thus these brands are kept fresh and exciting, changing not only with the times, but with the tech, the audience, and the current fighting game market.

In comparison, Dead or Alive 6 is Dead or Alive 5 with softer skin tones and a couple of extra modes. As a sequel, it’s almost a photocopy of its seven-year-old predecessor. Though few will be disappointed by DoA‘s trademark gameplay (save for the framerate hiccups), I’m in no doubt that even the most hardcore of fans will find everything far too familiar. At the risk of taking comparisons a step beyond, Dead or Alive is in danger of becoming the fighting game equivalent of EA’s annual sports releases: Last year’s game, but with minor improvements and a boosted price tag.

While it still makes for a fun fighting experience, Dead or Alive 6 shows that the brand has unquestionably run out of ideas. With little to showcase in the way of fresh concepts, gameplay surprises, or brand creativity, this long-running series chooses to coast by on being “more of the same”, whilst hoping to be the engine that pulls the DLC train. During this competitive era of fighting game reinvention, that just isn’t going to cut it for your 60 bucks.