Days Gone feels like it’s a few years too late. Nothing against zombie media, despite the currently dangerous saturation levels, but it’s something you’d typically see released around the height of Walking Dead‘s popularity: before the show started to stagnate creatively and the shambling undead popped up on practically every network.

Conversely, I think it spent too much time in the oven. The Days Gone pie is filled with meaty goodness, but you need to pick around the plentiful burnt bits. 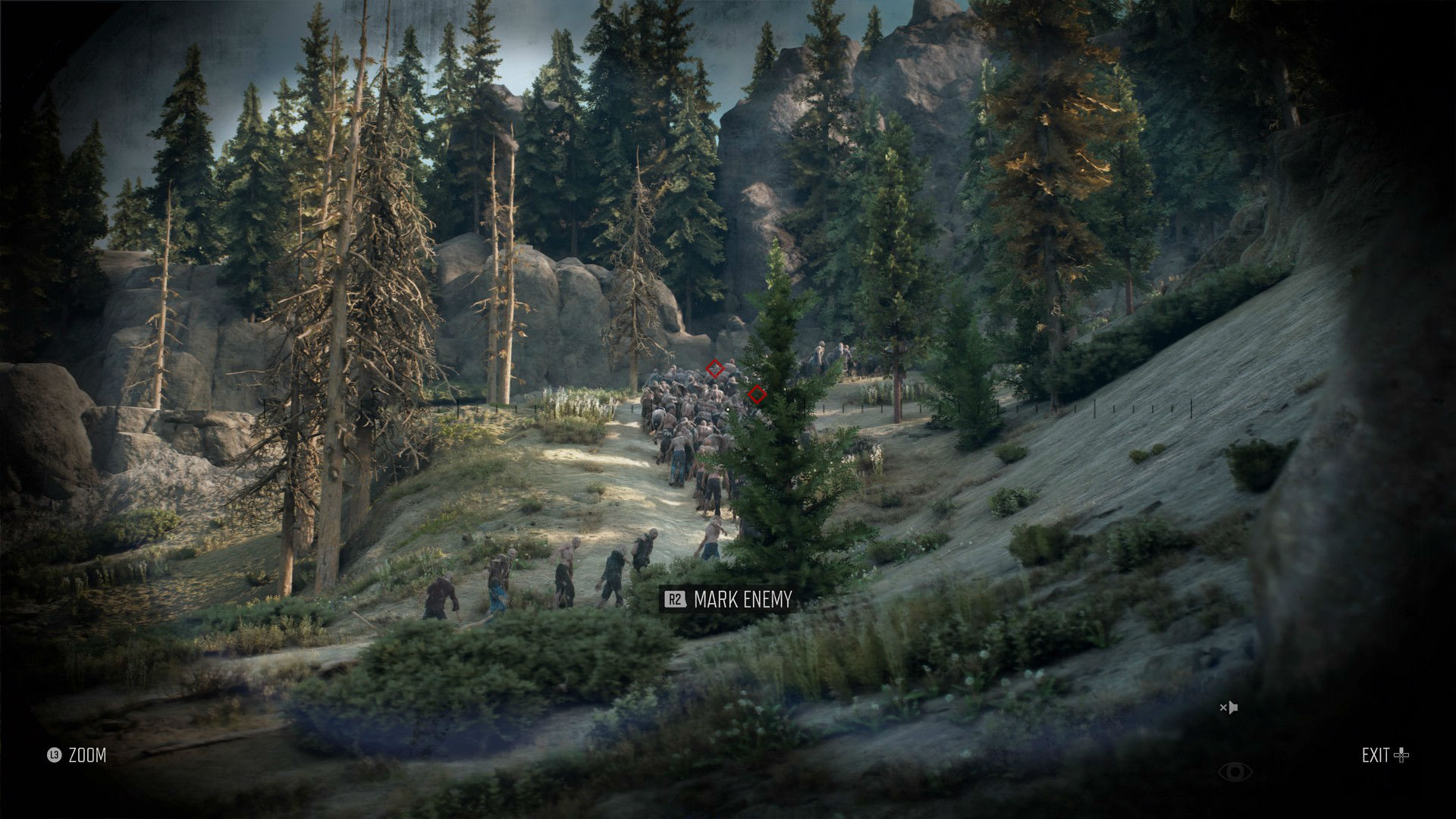 Days Gone was a strange game for me to assess as it simultaneously tries to endear itself to you and figuratively smack you across the face in seconds flat.

Drab post-apocalyptic appearances can be deceiving as the cast is actually likable, including the lead Deacon “Deke” St. John, played masterfully by sci-fi vet Sam Witwer. This is a world that asks you to repetitively babysit your very gamey motorcycle, your main means of travel, and doles out lengthy emotional scenes that are both mysterious and beg to be seen through until the end. Much like the real apocalypse, I’m sure, it’s constantly at odds with itself.

Let’s get broad for a moment. Days Gone is a survival-centric open world zombie game that focuses around a non-specific region in the Pacific Northwest. Most of the US is lost to what this universe calls “Freakers,” who mostly come in the quicker, 28 Days Later frenzied variety. Deacon St. John and his best friend William “Boozer” Gray are known as “drifters,” who move from colony to colony amid the chaos, doing odd jobs along the way. Part of what motivates Deacon, beyond the instinct to survive, is the hope that one day he might be reunited with his wife, who was a scientist before the calamity. As you can imagine, these dudes have baggage.

It’s not the most original angle, but Days Gone managed to surprise me as the tale of our duo unfolds, hitting on beats of depression and anxiety against the backdrop of a zombie-infested wilderness. That’s because there’s a lot of exposition and narrative scenes: as in, some missions are just watching people talk. We get an inside look at a lot of these characters, including supporting cast members, frenemies, and innocent bystanders. Odds are if they speak, you’re going to get a deep dive into their personality at some point. Nathan Whitehead’s fantastic score backs up all of these emotive uppercuts.

To be frank, I did not expect to care this much. There are five-minute scenes that focus on Deacon’s anxiety over locating his wife, and Boozer’s struggle to grapple with the uncertainty of this new world after a particularly harrowing event near the start of the game. These characters get beaten down repeatedly and we spend so much time with them that it works; it reminds me of a primo Frank Miller story in all the best ways that’s worth seeing through. But Days Gone just doesn’t know when to stop. Many of these great moments are strung together by repetitive missions, which allow it to descend into the dark realm of busywork.

A very unexciting, tunnel-esque motorcycle ride sequence doesn’t make a good first impression. I can see where SIE Bend was going with creative an attachment to your bike (much like many iconic horses or companions), but the curve goes from tedium at its lowest to apathy at a maximum. For one, you can’t fast-travel if you don’t have the fuel, but some story missions give you unlimited access to fuel. It’s almost like the team knew that it wasn’t a very fun thing to micromanage in a game with a massive open world and used a stopgap solution when they needed to move the narrative along.

It can also be gamed pretty easily. If you need to fast travel to a far-away location and can’t afford it, you just travel to the nearest one, look for a fuel source (usually a gas can or a gas pump), refuel, then immediately fast travel again from the menu. You can almost see the playtesting sessions and compromises in real time. The mechanical parts of Days Gone are frequently not congruent with the rest of its tear-jerking sinew. 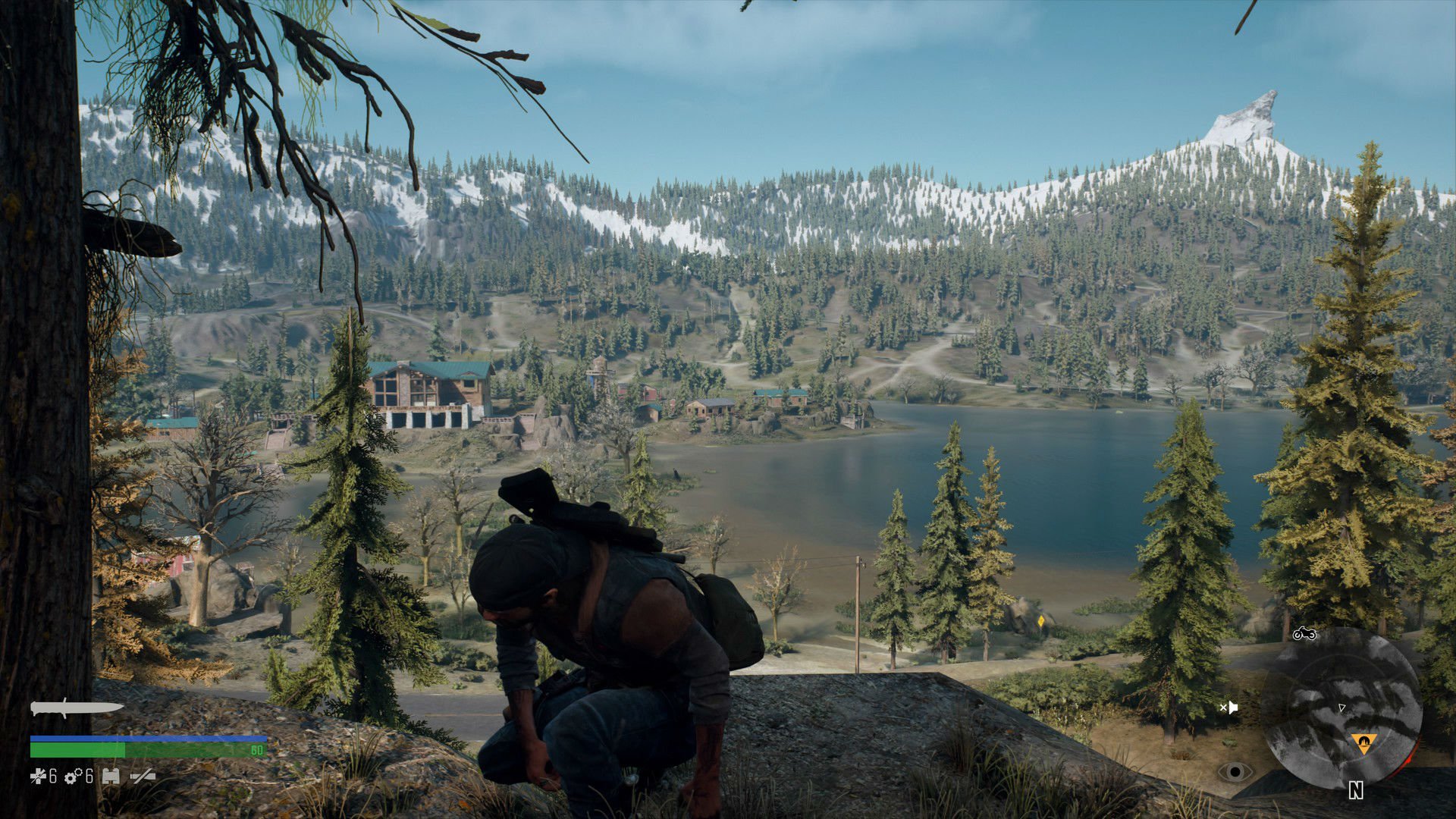 Those kinds of annoyances pop up every hour or so. There’s a really cool part early in the game where you’re running away from a freaker pack in a graveyard as you attempt to jet away with a cooler full of drugs (what an image!). As I sprinted up to my ride, I made sure I had the leeway thanks to a quick Molotov toss reprieve, and attempted to tie the container to the seat to make a quick getaway; only to be greeted by a “defeat enemies first” prompt. I imagined how cool that scene would have been in my head before the arbitrary message appeared and just wondered “why?”

Slowly but surely I realized the bike is actually the main source of frustration. It can be damaged during a shootout or a high-octane chase, at which point it’ll start smoking and you’ll need to repair it. There’s no glorious explosion or dramatic noise: it just kind of cuts the engine out and you’ll stop in your tracks. Again, in some story beats, the game will prevent you from repairing or refueling your bike, even if there’s an opportunity to do so. There’s a lot of these little micro-moments where short falls will kill you instantly, you can’t swim for more than a few seconds at a time, and there are several instant-fail stealth sections (that whole faux pas chestnut comes back to roost).

That’s to say nothing of the glitches (most of which were minor, including one crash that cost me around 30 seconds of progress). I’m torn on some of the ideas that were clearly meant to be more nuanced. Having items break faster than Breath of the Wild or run out of ammo quicker than a Resident Evil gun is kind of cool. Zombies can swarm you at any moment and having to govern a stamina meter to know when to sprint or dodge is interesting. When a gigantic horde attacks you and you swing the camera back to look at it, it’s a sight to behold. 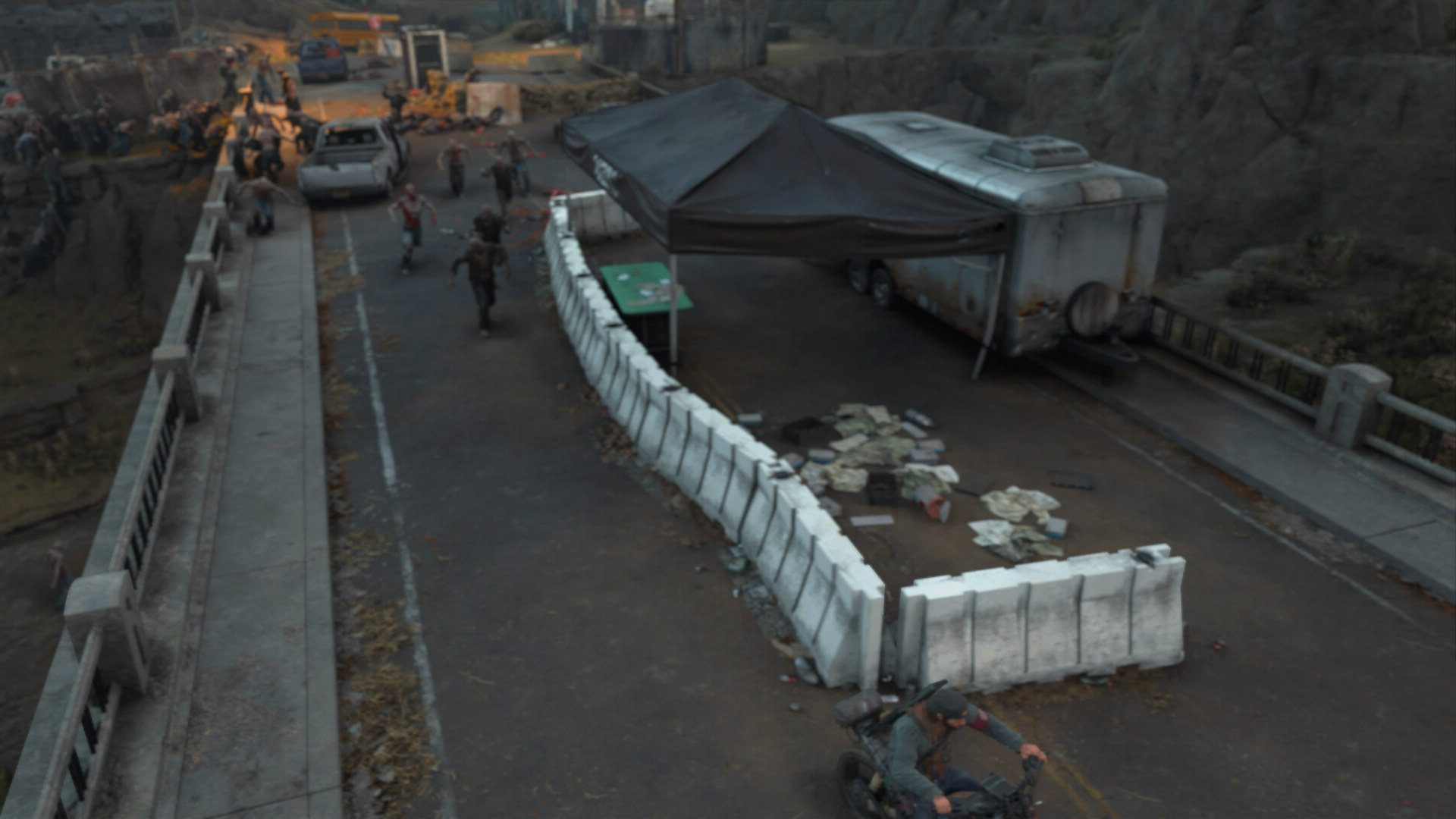 You do hit that point around 10 hours in (of what’s essentially a massive 30-40 hour adventure) where your guns are more effective and hold more ammo, your bike can travel further without falling over to a brisk wind, and the wild as a whole is more interesting to take head-on. I dig the puzzle-like challenges of having to diffuse sound systems for science trailers to gain stat-enhancing upgrades. Taking on a camp with a mix of stealth and head-on combat reminds me of modern Metal Gear Solid.

Skill trees, while basic, allow you to build your character the way you want, and freaker hordes (which are basically the main boss battles of the game, with life bars to simulate how many zombies are left) are fun and challenging to smash up against. Then the soundtrack hits you just right and the performances are on-point. Days Gone! You are one confusing beast.

Days Gone ups the open world survival ante but doesn’t have enough cash to pay for the rest of the rounds of betting, making it one of the weirdest AAA releases in recent memory. If enough people buy it, its stronger moments will likely be immortalized in YouTube videos for years to come. Yet, most people will probably remember it as the open world zombie game that didn’t bring much mechanically to the table. With some tweaks to the pacing, it could have reconciled its warm, frank look at humanity and been something special.