Darkwood‘s atmosphere is stifling and oppressive. The top-down horror game builds slowly and with purpose; preying on our innate fear of the unknown and the crippling indecision of wondering who to trust. It’s a winding, obtuse journey through shadows and sickness that manages to be both intriguing and vexing at once.

When I first started playing Darkwood, it was the game’s cast of macabre characters and its creepy, implicit storytelling that drew me in. From minute zero, it’s clear that there’s something deeply wrong with the forest that surrounds you. It stretches endlessly, leaving everything under its canopy shrouded in dim light, allowing horrible creatures and otherworldly terrors to fester and hunt just out of sight. After a dozen or so hours of stumbling through poisonous mushroom patches, defending myself from shapeless assailants, and dealing with wicked, deformed mutants, I still dig Darkwood‘s unique and insidious brand of horror more than any other part of the game.

That’s all to say that I like the idea of Darkwood much more than I actually like playing it. 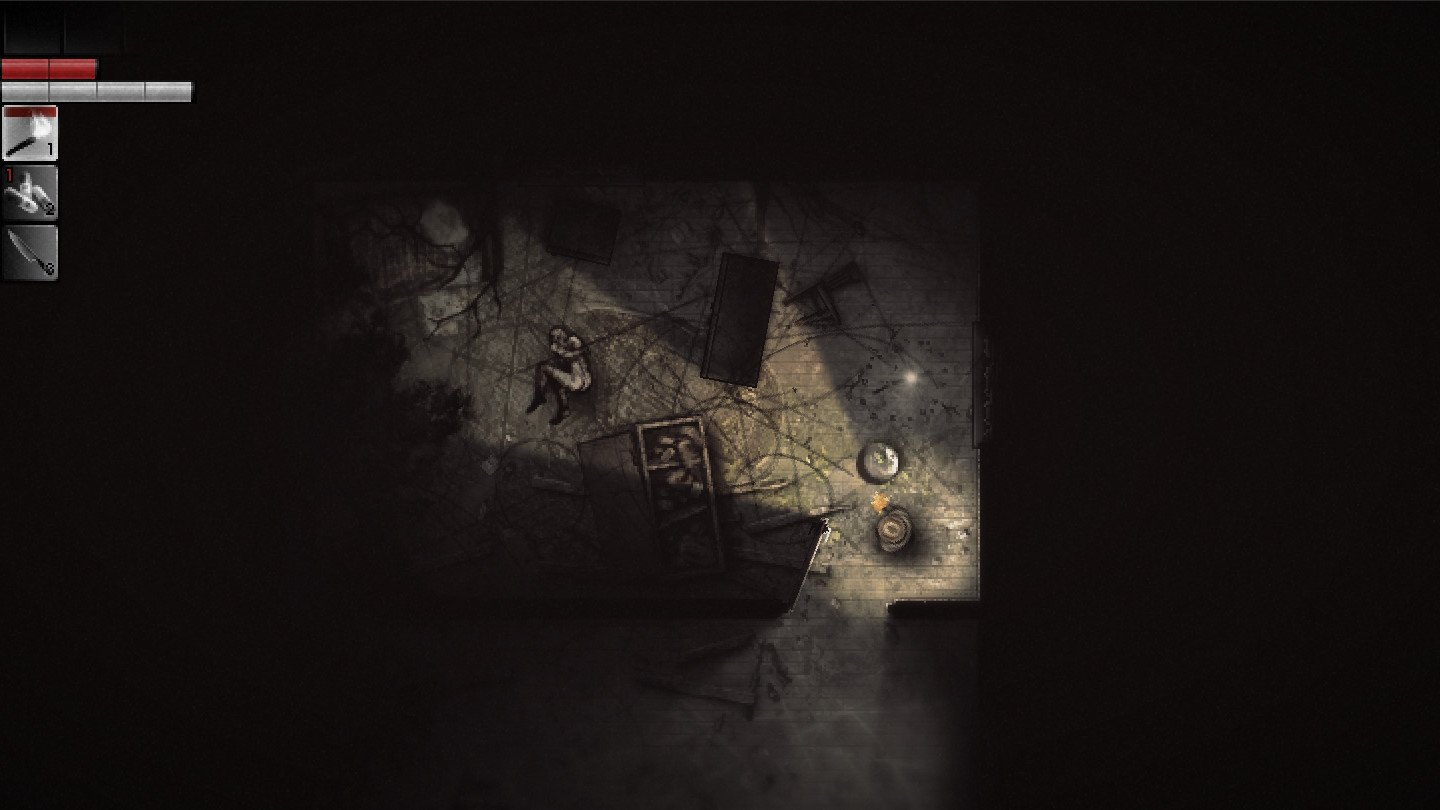 Darkwood walks a fine line between atmospheric world building and tense standoffs. Players take on the role of a mute man stuck in a forest. After a short prologue sequence that introduces a wicked doctor, the man — and players, by extension — are left alone and mostly defenseless. There’s only one goal: survive long enough to find your way back home.

This loose structure manifests in both Darkwood‘s day/night cycle as well as its randomized maps. During the daytime hours, you’re free to wander across the environment, either scouring locations for much-needed supplies or chasing after narrative breadcrumbs. There’s plenty to see, like ramshackle buildings and overgrown ritual sites. However, it’s rarely safe to linger. Once the sun begins its daily descent what little light that punctured through the foliage creeps away, allowing a host of unsettling and malicious creatures to descend on your position.

It’s during the nighttime hours that Darkwood shifts positions. While you’re free to explore and generally soak in the game’s creepy atmosphere during the day, your character doesn’t stand a chance once night falls. To make it to the next morning, players must retreat to their hideout and prepare for whatever might come knocking at their door. Think of it as a supernatural assault on your hideout. You can barricade windows with boards and nails, push heavy objects against doors, and set bear traps around your base. If those preventative measures don’t stop your assailants, then you’re left with little choice other than to defend yourself with any weapons on hand.

I spent most of my time torn on whether I liked the base defense portion of Darkwood. The game does an excellent job of building tension. It’s not uncommon for the only light on the screen to come from a single lamp by your side. Shrieks, howls, and myriad other spooky sounds fire off nearby, creating a sense that something is hiding just out of sight. Hearing one of your barricades get ripped down is a dreadful experience, and waiting for a monster to tear through the darkness and attack your is enough to get anyone’s heart racing. It’s just a shame that combat is so damn clunky. There are plenty of randomized, unique “night events,” ranging from all-out sieges by deformed savages to spectral whispering and human sacrifices that make each evening unpredictable. I spent my nights alternating between hiding in a corner, flinching every time I heard something go bump in the night, and sitting stock still, weapon raised and pointed at an entryway. It’s tense, quality horror. It’s just a shame that when you actually have to fight something, the illusion gets shattered at once.

Darkwood‘s combat sucks. It’s an overall clunky affair that revolves around holding the right mouse button to wind up a strike and pressing the left mouse to swing. There’s nothing intuitive about it. I found most of my encounters quickly devolved into awkward dances around enemies as I tried to prepare an attack only to get rebuffed by a faster, stronger foe. While there is a quicker melee strike, I found it unresponsive and rather useless. If you’re going to fight something, it’s best to prepare for an unhappy outcome.

Clunkiness and obtuse design decisions trickle into other elements, too. Many set-piece items require contextual button presses to trigger, which are cumbersome and frankly, annoying. There was rarely a time when I felt like the additional input did anything to build atmosphere and tension; it’s one thing if you’re stumbling around trying to unlock a door while something crawls toward you, but it’s an annoyance when you’re just out there exploring. The same can be said for mantling over small fences when navigating the terrain. Frustrating combat and clunky controls are a hallmark of the genre. Darkwood, even with its top-down perspective, can’t escape that. 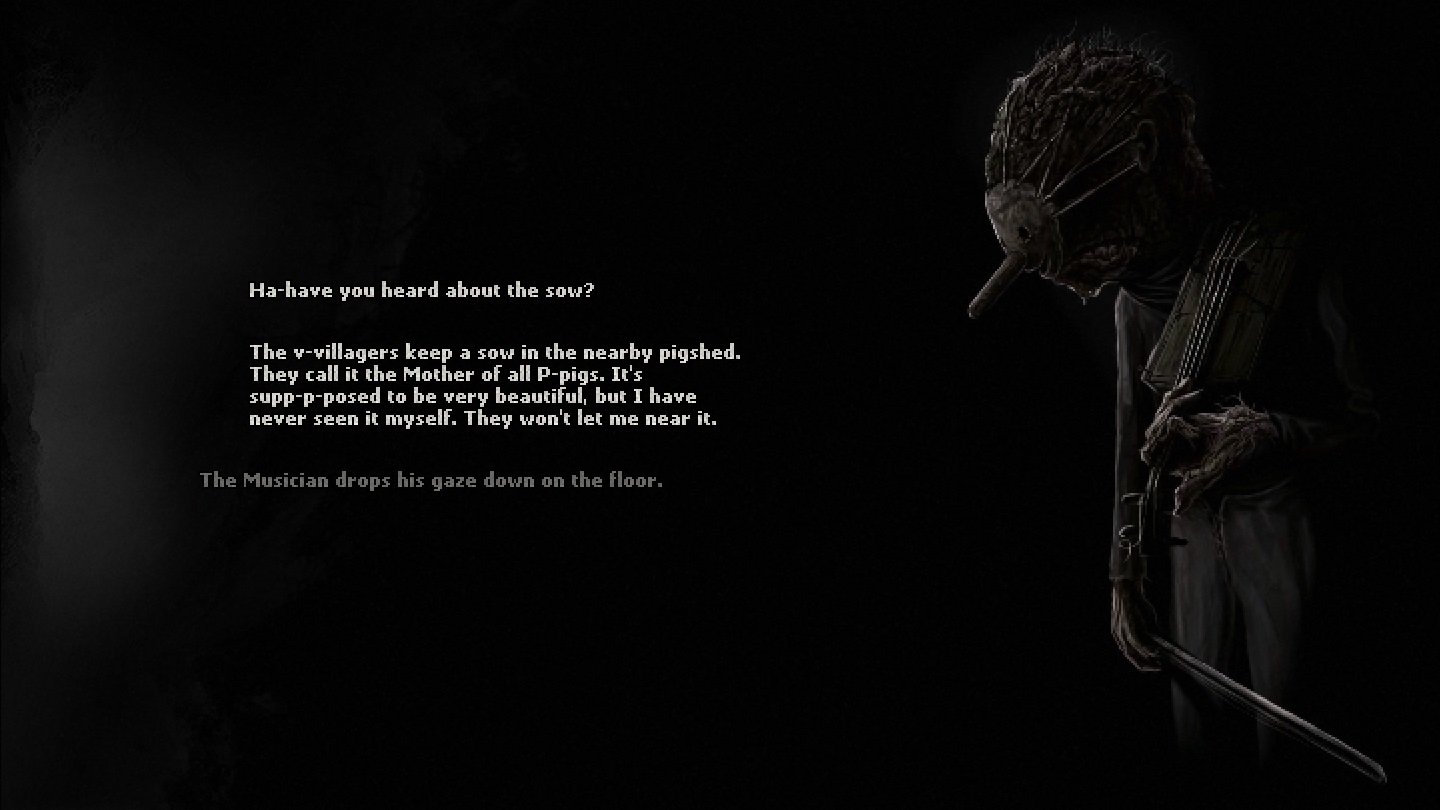 It’s a shame because outside of the defense portion of the game and the aforementioned unappealing controls, Darkwood is one of the most rewarding horror games I’ve played in a long time. Even with the camera pulled back, it’s easy to feel like you’re stuck underneath the forest’s all-encompassing branches. Virtually every key character I encountered left a chilling impression on me, from the bipedal Wolfman and his toothy, malicious grin to the conjoined, robed amalgamation known as The Three. Darkwood‘s story draws you into a world of unknowable forces and deranged characters, but it never fully plays its hand. The story can unfold a handful of different ways, depending on player choice and whether or not you want to kill key characters. No matter how it shakes out, there are far-reaching questions and memorable moments that resonated deeply with my love of strange horror.

Darkwood does a great job of showing off its weird, unsettling world, but it struggles to tell players what they have to do. The woods are home to secrets and terrible truths alike. Though it falls short of reaching its full potential, mostly due to questionable controls and cumbersome combat, this horror game is worth the experience on the merits of its haunting atmosphere alone.