A mouthful of blood

There is a poison coursing through the veins of Darkest Dungeon’s latest expansion. A malignant and cruel thing, a toxin that burns red hot and never lets up. But, if there is one theme that runs throughout the entire Crimson Court expansion, it’s that pleasure may be found through suffering. 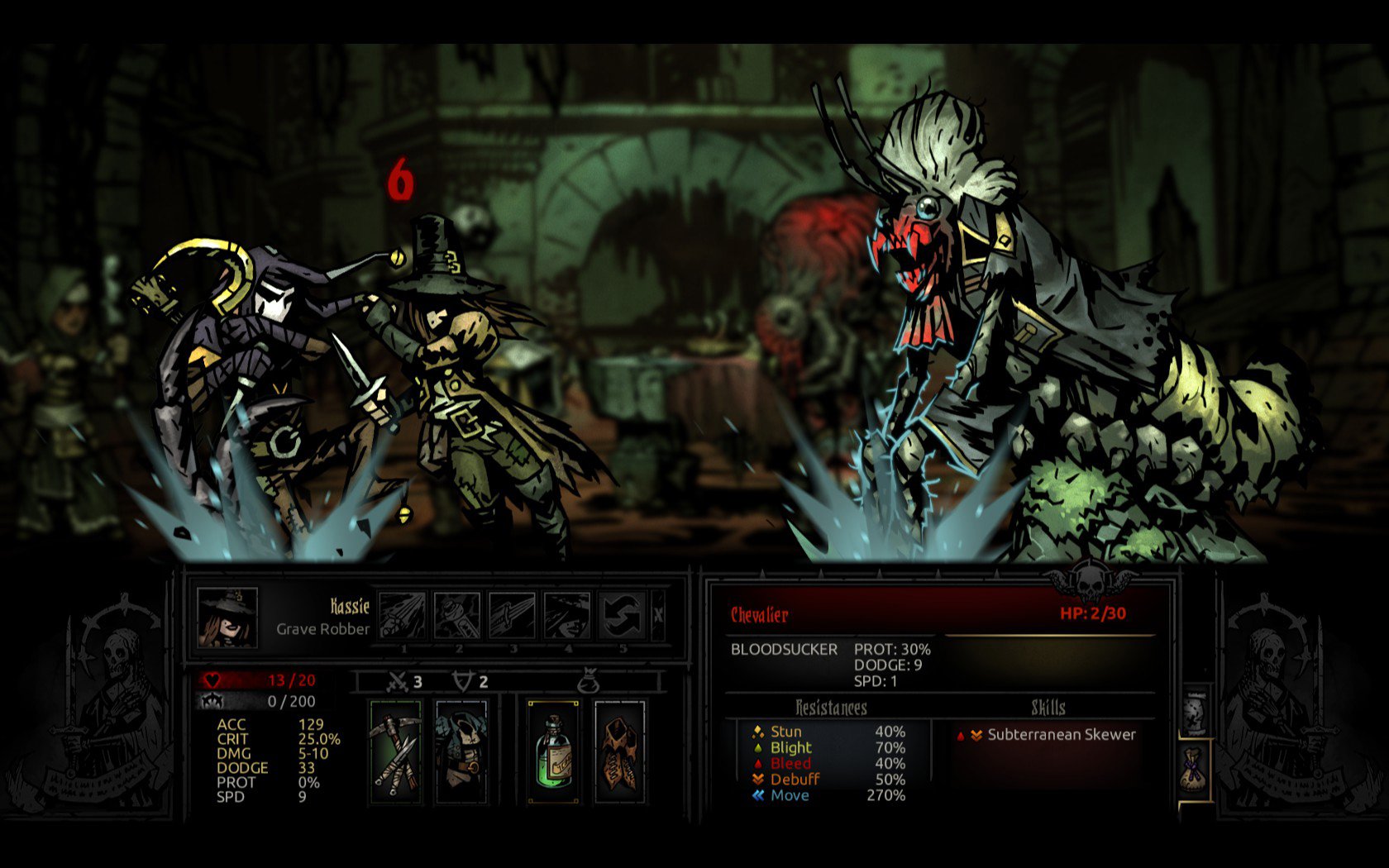 Darkest Dungeon has changed a lot in the past year since release. If you haven’t played it since it launched, you may scarcely recognize its twisted halls and grotesque beasts. Additions such as random town events, adjustable difficulty modifiers (perfect if, like me, you loved the original but couldn’t tolerate the endgame grind), and unimaginably cruel new enemies have already elevated the game well beyond what it once was.

But, while all of these additions represented incremental improvements, The Crimson Court represents a sea change. It takes the building blocks of the dungeon you know and stacks new, bizarre architectural tortures on top of them. It warps familiar mechanics in new and unexpected ways. It finds fiendishly original methods of ratcheting up the pressure as you juggle the physical and mental health of your heroes, along with the management of the Hamlet. There is a dark imagination at the core of The Crimson Court; an admirable (if somewhat disturbing) dedication to finding new ways to twist the knife.

The titular Crimson Court is present in the form of an all-new area to explore. It’s a whole new dungeon, set of ruined opulence and corruption, complete with an “aristocracy as bloodsucking vampires” theme (a message I can get behind). There are, of course, new curios and traps to discover as you would expect, but Court missions deviate from the standard affair in much more interesting ways.

The main Crimson Court quest line features a series of massive, sprawling, predetermined maps (rather than randomly generated tiles) similar to the final dungeons of the base game. These missions are parceled out over time, requiring certain conditions or items to access. But the differences don’t end there. Torch light is replaced with bloodlight (more stressful to wander in, but at least you don’t have to cart around a bundle of sticks). Firewood for camping must be foraged for, the respite of camping limited to rare and lucky finds inside the dungeon itself. Most interestingly of all though, you can abandon the mission at any time and not lose any progress. Leave the mission, and you’ll be placed back exactly where you left off when you come back. In fact, you’re encouraged to take multiple trips through each dungeon. 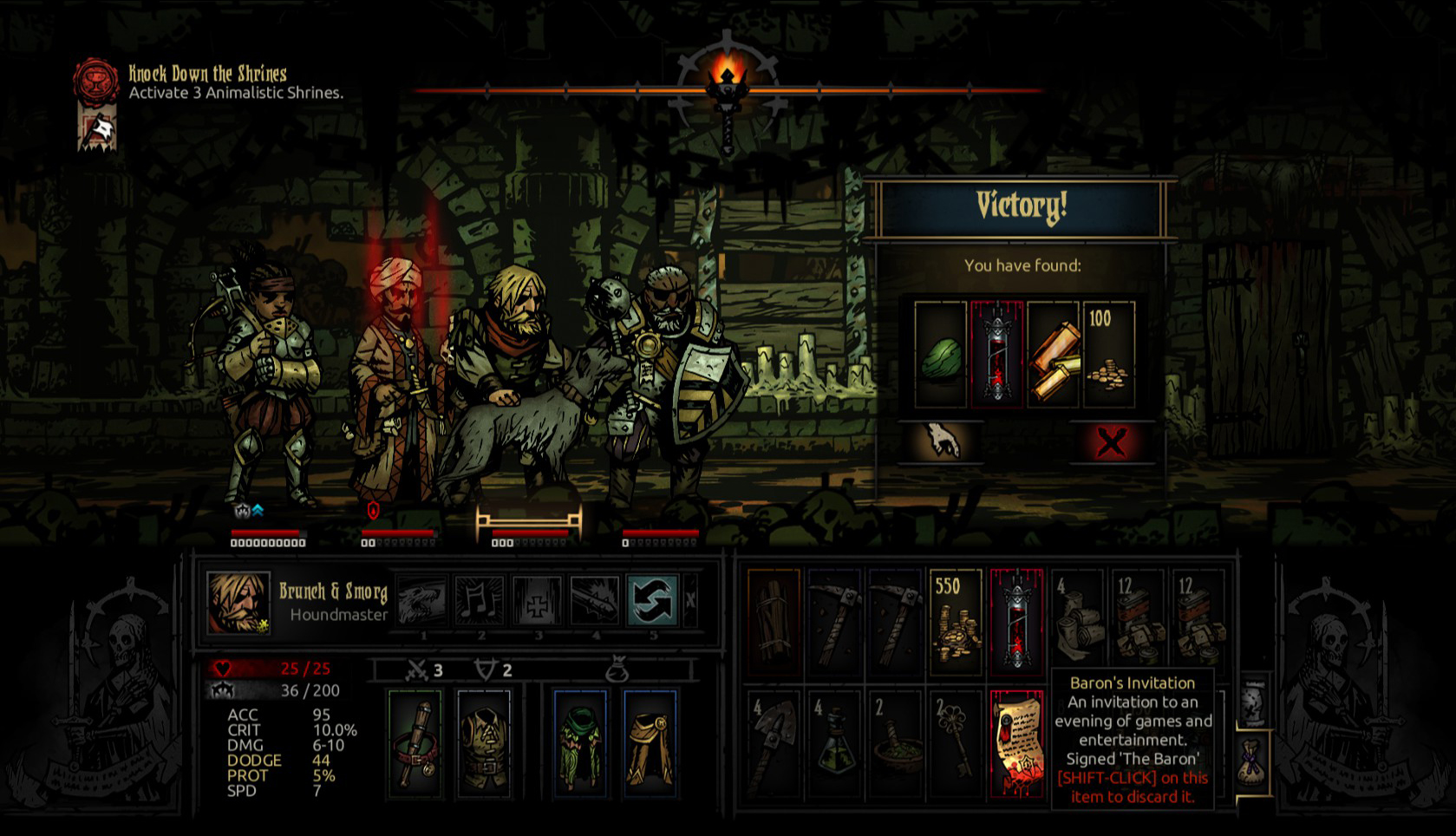 This is a good thing, as it’s doubtful any party could make it end-to-end in the Court’s largest dungeons (which include upward of a hundred rooms). Locked gates bar your progress, necessitating painful backtracking to find keys, and never-ending spawns of enemies dog your every step. These aren’t missions, they’re expeditions.

The monsters of the Court stretch the tactical limits of Darkest Dungeon’s combat system to the brink. Rather than just slather on the health and damage to make the Court’s inhabitants dangerous, the Bloodsuckers have access to a huge variety of unique moves and abilities that makes them both equally frustrating and satisfying to fight. You might think It’s bad enough that almost every vampiric enemy has the ability to heal themselves by inflicting damage, but that self-heal also triggers a unique secondary form for most of them, further expanding their arsenal of attacks. Learning how to take on each new enemy is a painfully fun process.

From constant line-up shuffles moving both your party and the available targets around (meaning your best-laid plans might be upended before you get the chance to strike) to devastating support units and AoE attacks, just the rank and file beasts of the expansion represent a real threat. If you had grown bored with Darkest Dungeon’s conventional challenges, Crimson Court will give you an ample supply of new miseries to sample.

The most unique mechanics have, appropriately enough, been saved for the boss characters. I won’t spoil any of them here, but I was genuinely surprised at how devious and novel some of the fights are. Just remember that discretion is sometimes the better part of valor, and there is a reason you can abandon these quests without losing progress.

Most insidious of all is the presence of the Crimson Curse. Each Bloodsucker enemy has the potential to infect a hero with the vampire disease, rendering that hero addicted to blood. This is a double edged sword – the blood can temporarily empower a hero to new heights, but it can also render a hero useless as they waste away without their fix, to the point of death.

The problem is, blood is a rare and precious commodity, only available as a drop from Bloodsuckers (who show up randomly in other dungeons outside the Court) or in a limited quantity through an expensive addition to the Hamlet (part of the new, but generally forgettable Districts system added in the expansion). Get too many heroes addicted at the same time, and your ranks will begin to thin as need outpaces supply.

Thankfully, you’re not alone facing these new challenges. A new hero has been introduced to the Hamlet, the Flagellant, a crazed masochist whose entire move set relies around riding the edge between life and death to tap into greater power.

At first blush, the Flagellant might not make sense. He has limited punch but high damage-over-time. He has moves that hurt himself to strengthen his allies. The ability to self-heal, but only when he’s close to death. Camping skills that add stress rather than decrease it. It takes some experimentation with his unique style and “rapturous” response to stress to understand his role on a team, but once you do, he becomes a powerful hybrid front-line/support unit that may occasionally lash one of his teammates to bloody strips (you take the good with the unhinged, I guess).

All of these new mechanics and characters weave together to create something unique and special in this expansion. But while there is plenty to praise, it has to be said that with The Crimson Court, Darkest Dungeon finally commits some of the most grievous of sins it has been always unfairly accused of.

This expansion marks the first time I felt like the game was honestly and blatantly unfair.

It starts on the first Court mission, where the game actively lies to you. Labeled as an apprentice dungeon for low-level characters, the mission contains a boss encounter mid-way through that is all but guaranteed to result in a wipe unless you brought a very fortunate team composition, or immediately flee (or were naughty and spoiled it in advance). Just ask anyone who has played the new expansion about the “apex predator” and watch them shiver.

If that was the worst of it, I’d shrug it off. One “gotcha” style ambush in a game known for its cruelty might be irksome, but not unacceptable. The real culprit that tips the finely tuned balance point between “hurts so good” and “please, God, make it stop” is the Fanatic, a roaming boss that hunts teams with heroes afflicted with the Crimson Curse, showing up mid-mission as a random encounter. 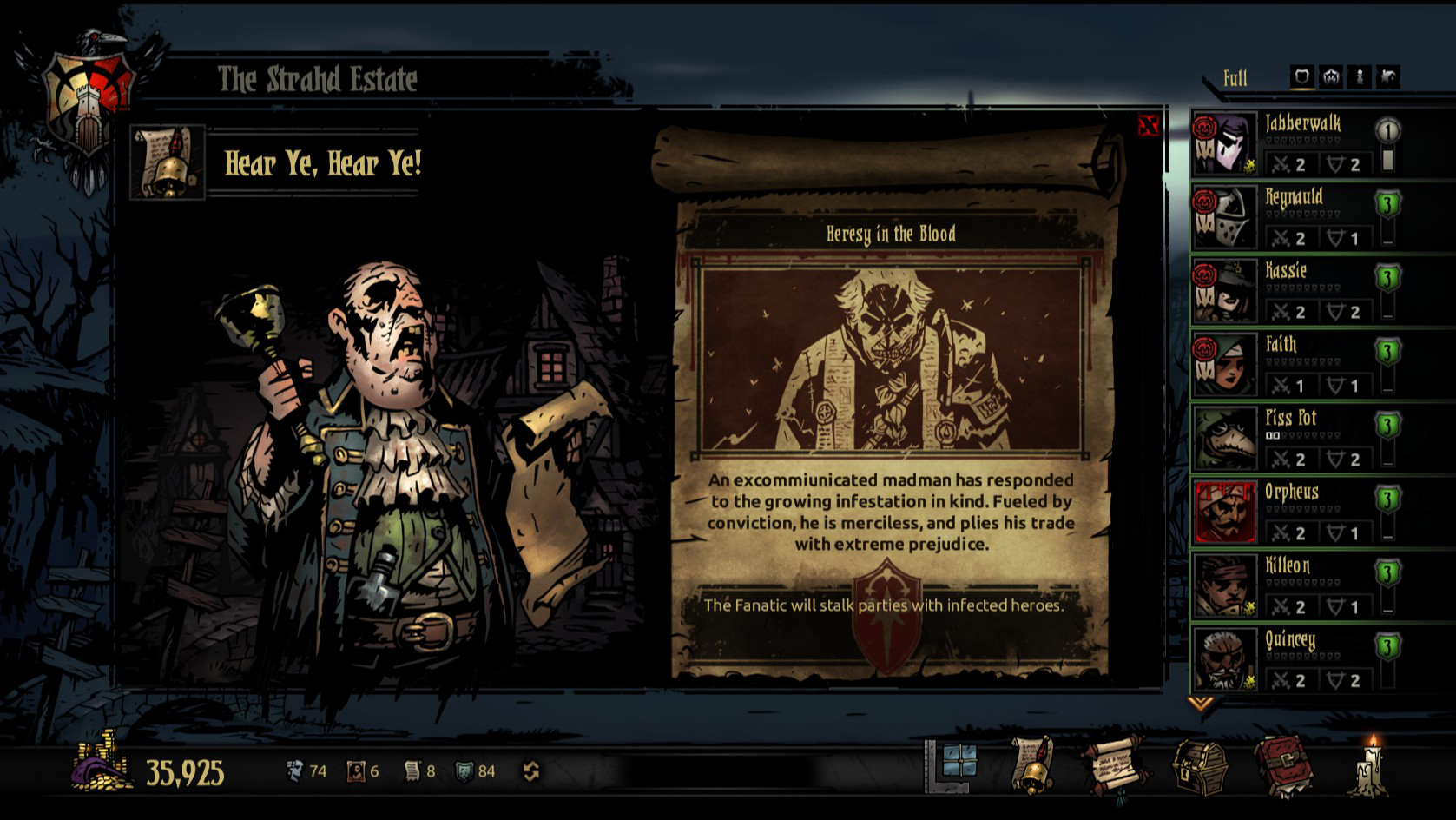 The Fanatic is cheap. As someone who has played through the game multiple times, fought through Collector ambushes, dispatched Brigand Vvulf, and tussled with the Shrieker, I can safely say the Fanatic is the most annoying and unfair boss encounter in the game. Unlike the other new bosses, this frustration isn’t the result of interesting new mechanics. What the Fanatic does is similar to other bosses – he ties one of your heroes to a burning stake just like the Hag throws one of them in a cooking pot, he marks heroes for big follow-up damage like the Swing King, he takes multiple actions per turn like the Shrieker – only for more damage, stress, and status effects.

Aside from immediately removing one hero from the fight, the Fanatic always surprises the party when he appears, shuffling the lineup. Most of his attacks not only do tremendous damage and a pile of stress, but can either stun the character or move them to and fro through the lineup. He’s durable as hell, has high resistances to all status effects, and never stops attacking. It’s a DPS race where he has a head start and you have to run uphill and barefoot.

Unless you have a custom-tailored party for the encounter with fully upgraded gear and specific trinkets, you don’t stand a chance. And sure, plenty of bosses in Darkest Dungeon require a specialized approach, but none of them just jump you in the middle of a hallway on a random mission. The only saving grace is the loading screen will give you a heads-up when the Fanatic is primed to spawn in a dungeon. This gives you the unenviable chance to abandon the mission (adding stress to those fleeing) and either cobble together a team that might be able to put up a fight, or find a batch of disposable heroes to feed to him – because once the Fanatic is on your trail, you have to fight him. 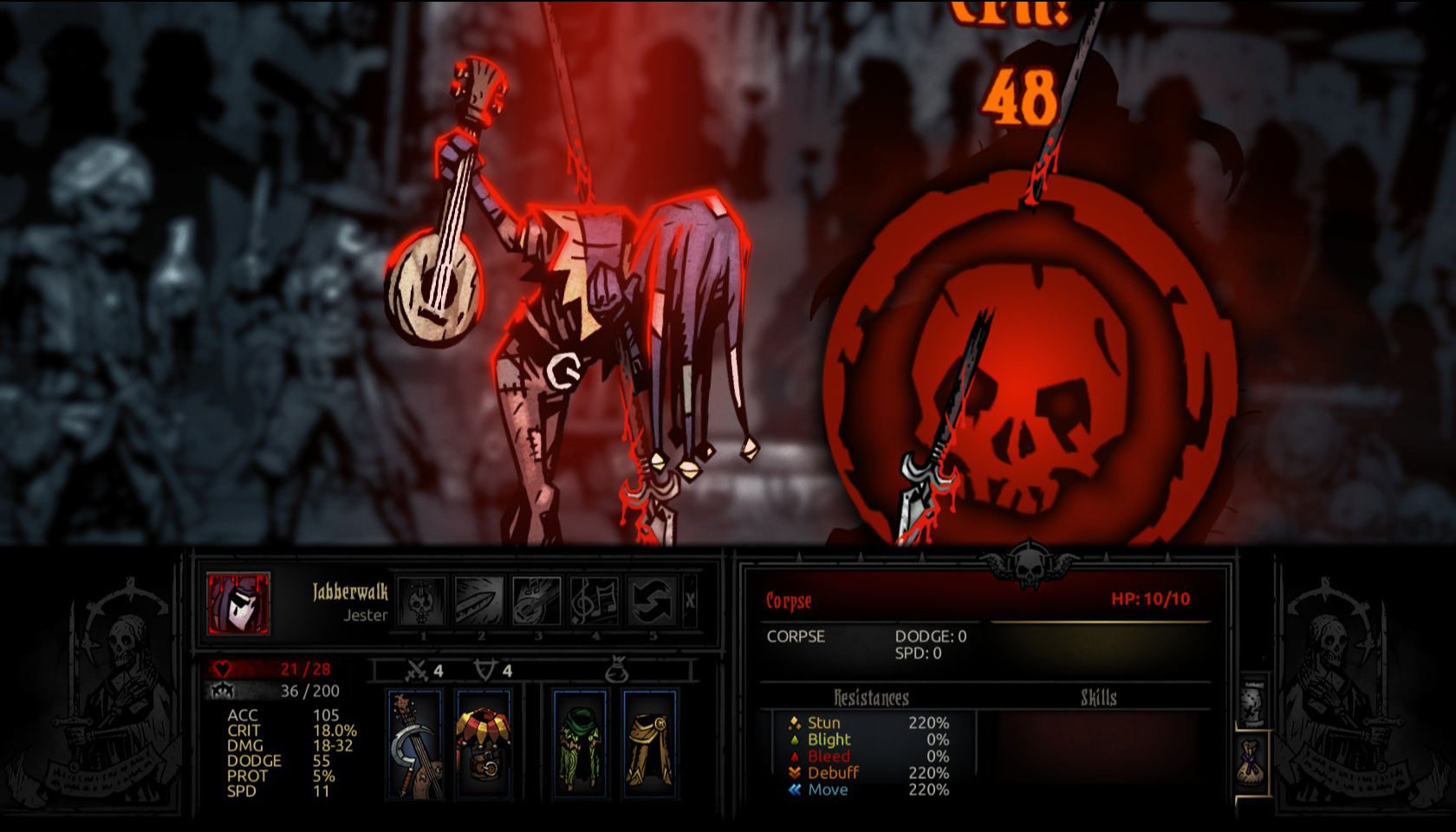 Between the Fanatic, the surprise mini-boss, the pressures of the curse, and the dizzying array of new and brutal enemies, the expansion poses an interesting proposition.

By and large, I think The Crimson Court is an amazing expansion that radically alters the game for the better. It does what the best expansions do, and builds on what’s been established in new and surprising ways, expanding the confines of what you can do and have done to you all at the same time.

That said, I think The Crimson Court can be just as overwhelming and suffocating as it is liberating. Even as a veteran dungeon diver, there were times where I felt completely lost and hopeless as my heroes either withered in the Hamlet, starving for blood, slunk back to town bent from afflictions and stress in failed attempts against the Court’s bosses, or were mercilessly burned at the stake by the Fanatic.

Darkest Dungeon offers a solution, but it’s an odd one. The DLC and its specific parts (the new character, the districts, the Court itself) can be enabled individually at any time during a playthrough. It seems bizarre; I wholeheartedly recommend this expansion, BUT, also leaving most of it turned off for the first half of the game or so.

If you’re new to the dungeon or it’s been a long time since you ventured into its depths, do yourself a favor and get your sea legs ready before wading into the bloody pools of The Crimson Court. If you’re an experienced delver looking for a new challenge, then by all means, step into the moonlight and find out what the night has in store for you.