It’s no Artorias, but it’ll do

2014 has been very good to me, but Dark Souls II is one of my favorite games of the year. Many debates have raged on as to whether or not it’s as exceptional as its predecessor (Demon’s Souls is better than both), but having played it prior to launch without any hints or guides, I heartily enjoyed getting lost in its labyrinthine tunnels and deadly arenas.

The Crown of the Sunken King DLC expands that goodness by about five to ten hours depending on your skill level, and even if it’s one of the less remarkable levels in the game, it’s still worth playing. 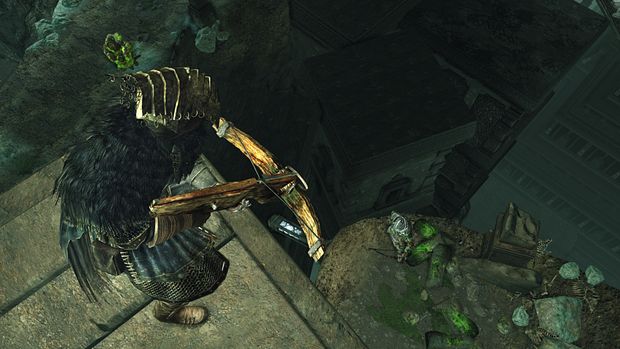 So here’s what you’re getting with Crown — three new areas, new spells, more items, and extra enemies. Not all of them are created equal however, as some of the baddies feel like re-skins of prior models (one actually is a re-skin), and not all of the weapons and items are particularly useful for extended playthroughs. Still, the core areas are very well done and manage to differentiate themselves from the rest of the series.

Entering the DLC is dead simple, and will likely appease fans who found the process to access the Artorias content in the previous game frustrating. All you have to do is have the Black Gulch area cleared (up to and including The Rotten boss). In that area is a new snake-like statue — just touch the statue and you’re in.

There’s a bonfire right near the start of the DLC, and with Dark Souls II‘s convenient travel system, you can head to and from the content anytime you please. This is a huge plus for me, since the DLC doesn’t lock you out after completing it and feels like a genuine expanded portion of the game that you can return to and explore freely. 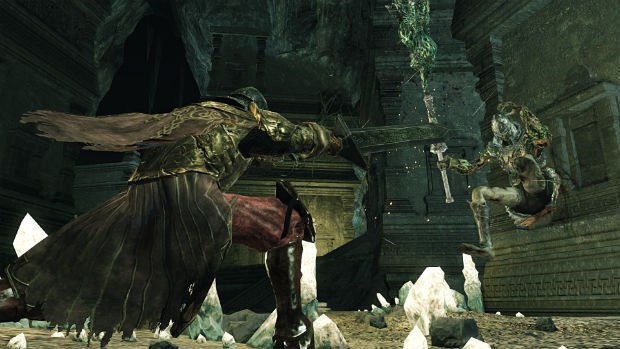 Crown of the Sunken King starts off in a giant open cavernous area, filled with ancient Aztec-like structures. It gives a real Indiana Jones vibe, which is accentuated by special obelisks that you can strike to raise or lower specific platforms. The Souls series has always had environmental manipulation in some form, but here it feels a lot more liquid than normal, and figuring out the puzzle of the ruins felt more taxing than most zones.

In fact, the DLC is actually one of the more difficult zones I encountered in general, as enemies do tons of damage, nearly everything poisons (even regular foes) and there are pits at every turn. Just when I thought I had mastered an enemy type a new concept sprung up in its place, and I can’t count the amount of times I misjudged a jump only to fall into the abyss. If you’re looking for more of a challenge, this will suit that need nicely.

As far as the enemies go, the base models feel like modified skeletons, but have an interesting “glass armor” feel with a unique green color scheme. The entire DLC has a cohesive green hue to it, without going overboard like Blood Gulch’s shiny emerald lighting. One of the most devious adversaries though is the poison statue cluster — which is basically just a bunch of poison statues cobbled together. It’s a lazy design, but it’s an effective enemy that will keep you on your toes. 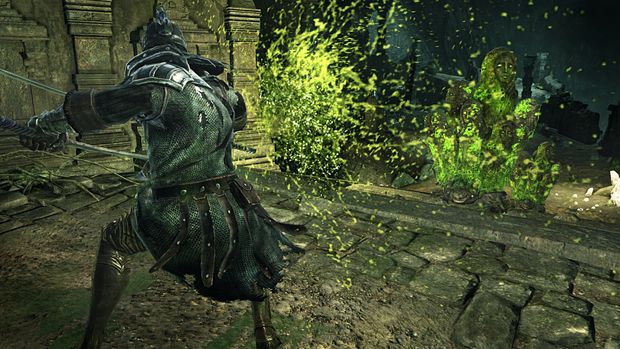 Sadly, the boss fights aren’t nearly as memorable as the bar that was set in Artorias. While those had completely original and terrifying models like Manus, Crown borrows some concepts from the original game — and even if a few aren’t directly taken, they still feel pretty static overall outside of the final boss. Having said that, I was still consistently entertained throughout the entire DLC, even if I wasn’t blown away.

Dark Souls II: The Crown of the Sunken King is not a “must have” add-on, but it does its job of delivering more Dark Souls. As always, I advise you to skip out on the Season Pass until all three of its pieces are out so you can judge it by the strength of its parts. However, hardcore Souls fans will want to at least buy Crown simply to experience a challenging new area that’s worth trekking through.