They say the first impression is always a lasting one. The main loading screen in Da New Guys: Day of the Jackass has a guy with his hand stuck in a toaster.

“Great,” I thought, “is this going to be some low brow, cash-in?” Actually, Da New Guys is almost entirely a one-man show developed by Chris Burton (aka Icebox Games). Is his vision enough to make the game stand out among more notable point-and-click adventures? 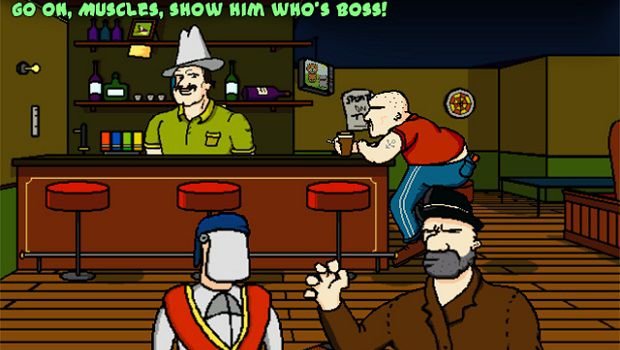 Despite its title and loading screen, Da New Guys: Day of the Jackass isn’t really low brow or trashy at all but does attempt an absurd and fairly lighthearted story. Da New Guys are a three-man wrestling faction, plying their trade in the city’s infamous Wrestlezone. When the intellectually challenged (and ironically named) Brain somehow wins the Wrestlezone championship belt, he’s mercilessly hounded by jealous wrestlers. After managing to escape their clutches, Brain is kidnapped and it’s up to his teammates Simon and The Defender to rescue him.

The story may be about professional wrestling, but Da New Guys bears no real resemblance to pro wrestling’s soap opera-esque brawling. What you will find is a drunk CEO, ten-year-old criminal mastermind, a prison break, and more than one vehicle pursuit. If anything — aside from the occasional mild swear word — Da New Guys‘ humor is fairly tame, which stems from controlling the good-natured and easy going Defender for a large portion of the game.

The first thing that will make an impression are the graphics; I’m not one to knock anyone’s level of artistic talent, so I will simply say the graphics are rudimentary and functional. While they’re pretty plain and lo-fi, I didn’t feel the art distracted from the experience. I did find myself just not figuring out that some on-screen items could be interacted with, however. This wasn’t the same problem as what I encountered in The Book of the Unwritten Tales where the backgrounds were so rich with detail that objects never stood out; rather, it was me not realizing that an L-shaped object in a corner was a vital sock I needed to pick up.

Then there’s the voice acting. Again, I’m not going to knock an indie developer for voicing a big chunk of the game’s cast. That said, the only member of Da New Guys not to start wearing thin by the end of the game was Simon. Brain’s dopey American accent and Defender’s insistence on referring to almost every character as “my friend” really started to grate as I progressed. 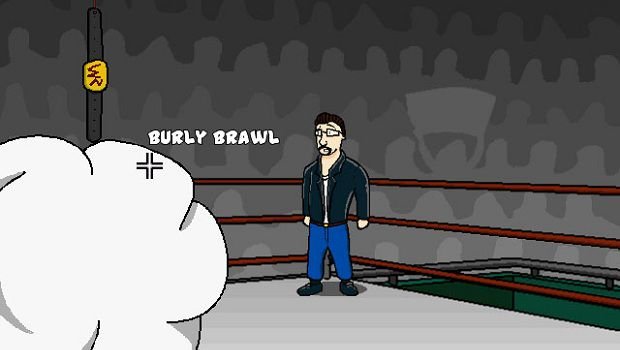 Aside from these issues, Da New Guys is solid point-and-click fun. Da New Guys is a classic-style adventure game through and through but there are some deviations to keep things interesting, such as a few chase sequences and even a top-down stealth section. The game only really lags in the latter third where you can control two characters and you’re working in various locations trying to find three parts of a puzzle. That was the most frustrating section I encountered (aside from a single reaction-based part towards the end), mainly as it was tricky to keep track of what I was still needing to do. A quest log or even just a simple checklist would have been really handy for that section of the game.

Da New Guys: Day of the Jackass is solid but unspectacular. Though the game never outstays its welcome, the puzzles never felt truly inspired at any point, especially later on. Most of them felt like a setup for a pleasant gag but nothing more. The latter half of the game sags a bit, particularly after the kidnapping and prison break storylines are resolved.

There’s much to admire about Chris Burston’s game; it’s got a decent length, the locations are varied, and the voice acting isn’t bad at all. If you’re desperately looking for a traditional point-and-click game, then Da New Guys will scratch that itch. It’s just hard to recommend it over other recent titles like The Book of Unwritten Tales, Gemini Rue, and the upcoming Yesterday.