There is one sure-fire way to get me to pay attention to your upcoming game: just tell me it’s something I like with pinball. “It’s a metroidvania…with pinball!” Consider the physical edition purchased. “It’s Senran Kagura…with pinball!” Add it to my collection right now. “It’s Metroid…with pinball!” I will buy a DS just to play it. I have yet to see something combined with pinball that doesn’t make me immediately start throwing money at the screen, as the kids say, so when Creature in the Well was pitched as “pinball with swords,” it shot straight up to the top of my most-wanted list.

Turns out, as enticing as that description is, it doesn’t paint an accurate picture of the game. This isn’t so much pinball with swords, but Breakout with swords. And actually, that might be a better combination. 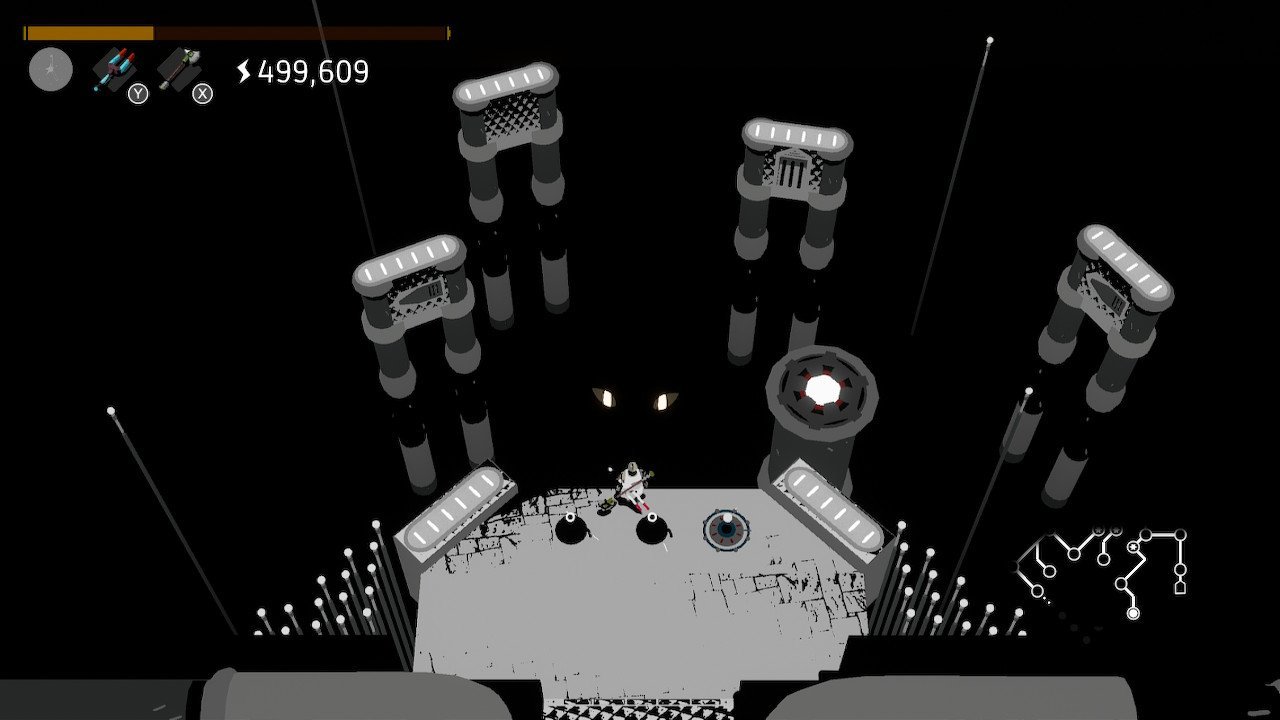 At the base of a lonesome mountain in the center of a sandstorm sits the town of Mirage. Once a vibrant little burg, it has died a slow death over many decades because of a never-ending sandstorm. The people of this town predicted the storm would come and set out to build a great machine that would allow them to control the weather and avert disaster. So, in that mountain, they built their machine; a complex and multifaceted facility, as well as numerous Bot-C android units to maintain it.

What the people didn’t expect, however, is that the mountain already had an inhabitant. A creature, the titular creature, that didn’t take kindly to their efforts to avoid this weather disaster. Driven mad by the darkness, the foul beast destroyed the Bot-C units stationed inside the machine, damning Mirage to wither and die in the middle of this coarse wasteland. People lost hope. Efforts to restore power to the machine were continuously thwarted by the creature. The only savior for the people of this desolated town is the one Bot-C unit to escape the wrath of the creature. With a stick in hand, the lone android returns to the machine, to breathe life into this town once more.

The machine, seemingly built by someone whose only points of reference in life were the Yankees and Arkanoid, features eight different levels divided up into several puzzle rooms that must be repowered by the Bot-C unit. To do this, players must smack an energy ball against a series of modules that grant electricity. Each puzzle room has its own mechanism for providing players with a ball of energy, either positioning it stationary like a game of T-Ball or pitching it at you with deadly accuracy. Clearing all the required modules in a room grants more than enough electricity to open the door to the next part of the level, all the way up until you reach the “boss fight” for the stage.

The general gameplay of Creature in the Well is simplistically brilliant. The Bot-C unit has two tools at its disposal. One is the strike tool, a baseball bat-like object used to hit the balls. There are a variety of different types of strikers to find in the game, including a big pot, a lightning sword that imbues the balls with static charge, and an axe that splits the balls into smaller energy orbs. The other is the charge tool, used to gather or catch ricocheting energy balls and charge them up. Using both tools in tandem represents the basic winning strategy for Creature: gather the balls with your charger and smack them away with whatever striker you have equipped.

The block breaker mechanics here are so goddamn satisfying even if the challenges never really venture into brain-busting territory. Puzzles either test your logic skills or your speed and aim with the strikers. Some of the puzzles can be difficult to complete without the right tools, and in that way, Creature in the Well has a Mega Man vibe to it. Levels in the machine aren’t played in any specific order. You unlock the first one, then the next two, then the next four. Each level contains a tool that is not only useful for completing that stage but could be a boon in the other stages you’ve yet to tackle. It isn’t necessarily beat Crashman to beat Flashman, but it does encourage experimentation with the different strikers and chargers you collect.

Trying to maintain all the balls bouncing throughout a puzzle room is an absolute joy that it was easy to overlook how often puzzle formulas were repeated. It makes sense from a world-building standpoint as it would be unlikely to have nothing but unique rooms throughout this facility. However, looking at it as something that does not exist in the real world, there is a bit too much filler for my liking. Though it is only about five hours long, some of these unnecessary rooms could have been cut without hurting the final product. 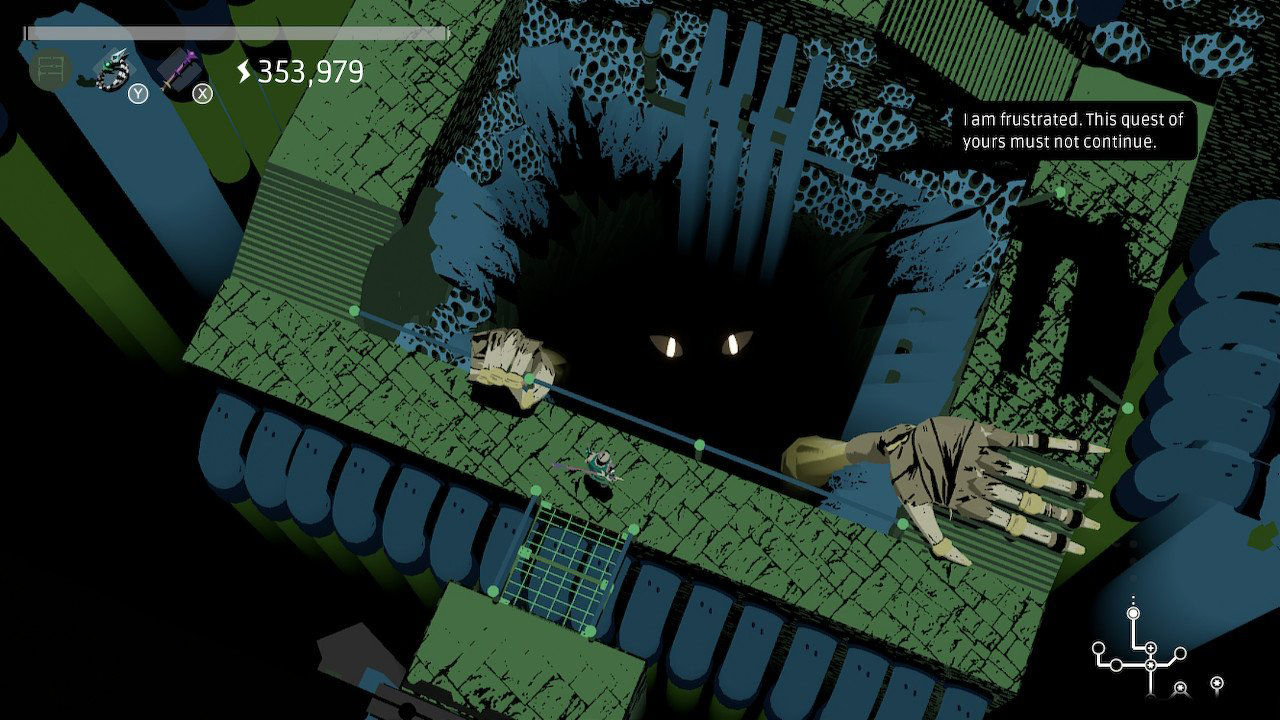 But oh, what a gorgeous final product this is. As AAA developers continue the arms race of realistic graphics, the indie scene has been in its own little “arts race” for the most beautiful game on the market. Titles like GRIS and Return of the Obra Dinn have set new benchmarks for art direction in the medium, and the black-light-poster-inspired Creature in the Well stakes its claim to being the most beautiful piece of programming available. Every level in the machine oozes styles with color palettes that invoke ‘70s psychedelia while also paying tribute to the games that no doubt inspired its creation. It may just be that it was the second-to-last level I played, but the North Star Conduit of Creature gives me strong Level-9 in The Legend of Zelda vibes. Accompanying the engrossing art direction is a muted soundtrack that succinctly adds nuance to every location you visit.

Besides the lack of variety in puzzle designs, the only other issues I have with Creature in the Well are its difficulty and how it handles death. Yes, you can “die” in this game. You have an energy meter and if you take too much damage from energy beams, wayward pitches, or the glowing orange orbs that make a slow beeline for your Bot-C, the creature will grab your little android and toss it out of the well at the edge of Mirage. From there, you have to go recharge your energy in an energy pool, then work your way back to whatever puzzle room defeated you. Thankfully, you don’t have to re-complete puzzles you’ve already solved.

Like the similar-looking rooms throughout the machine, I get why this design choice was made. The creature mocks the Bot-C throughout its journey, teasing that it will eventually give up. Every time you’re defeated by a puzzle — or more likely in one of the “boss fights” — you charge back into it, proving the creature wrong. It’s a powerful depiction of the Bot-C’s never-give-up attitude that can turn into a nuisance if you find yourself stuck on a puzzle that keeps beating you. First time failing, it’s a walk of shame, a chance for me to ponder how it is I screwed up. Around the fifth time a puzzle bests me, I’m begging for a quick restart option. 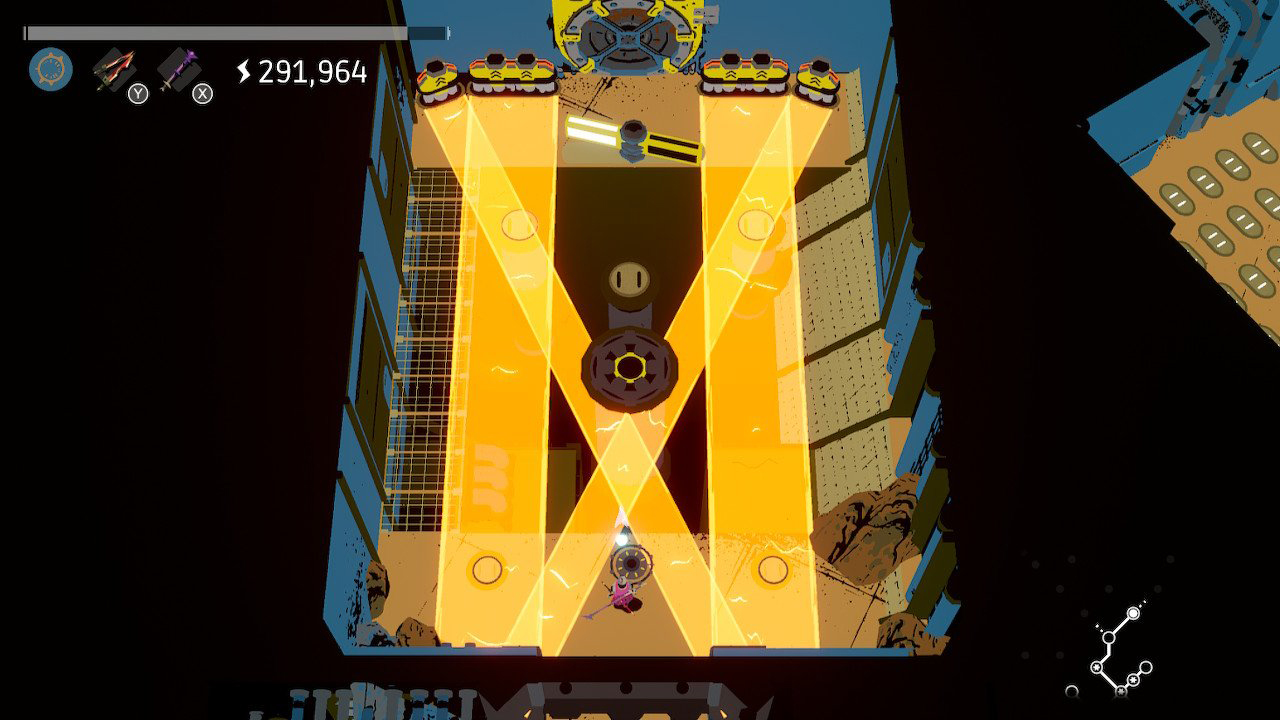 Most of the levels and puzzles shouldn’t give players much trouble when it comes to death. However, the boss fights, which are a series of three to six puzzles you have to solve in quick succession as the creature does what it can to stop you, can bring the pain. From my experience, two of these fights proved quite troublesome and resulted in many trips to the well. The problem is, these levels weren’t both at the end of the game where you’d think the most difficult challenges would lie. One is, but the other is actually the second level I played, resulting in an experience that doesn’t feel as though it has any sort of difficulty curve. Other players may not face the same hardships I encountered in these puzzles — in fact, they may struggle with puzzles I more-or-less breezed through — but having the difficulty peak and then absolutely crater so early in the game had me questioning if this second stage shouldn’t have been moved closer to the end.

Flight School Studio has created an exceptional world to explore in Creature in the Well. Its prodigious art direction is enticing, wooing players into a unique puzzle game that very much feels like a history lesson on the medium itself. It combines ideas and concepts found throughout gaming into a single, dynamic experience with a memorable antagonist eerily watching your every move. I absolutely love it, but I recognize there is room for improvement. With a bit more variety in design and a fine-tuned difficulty curve, it could have been one for the ages.