Although big studios tend to boast about their so-called “AAA” projects the most, a number of them have a stable of impressive, smaller-scale developers under their wing that bring the indie heat. Microsoft signed Moon Studios for Ori and the Blind Forest, Nintendo still allows studios to create smaller flights of fancy like BoxBoy, and Sony has PixelOpus, among others.

We could really use more of that light touch in an era full of games-as-a-service monoliths: Concrete Genie included. 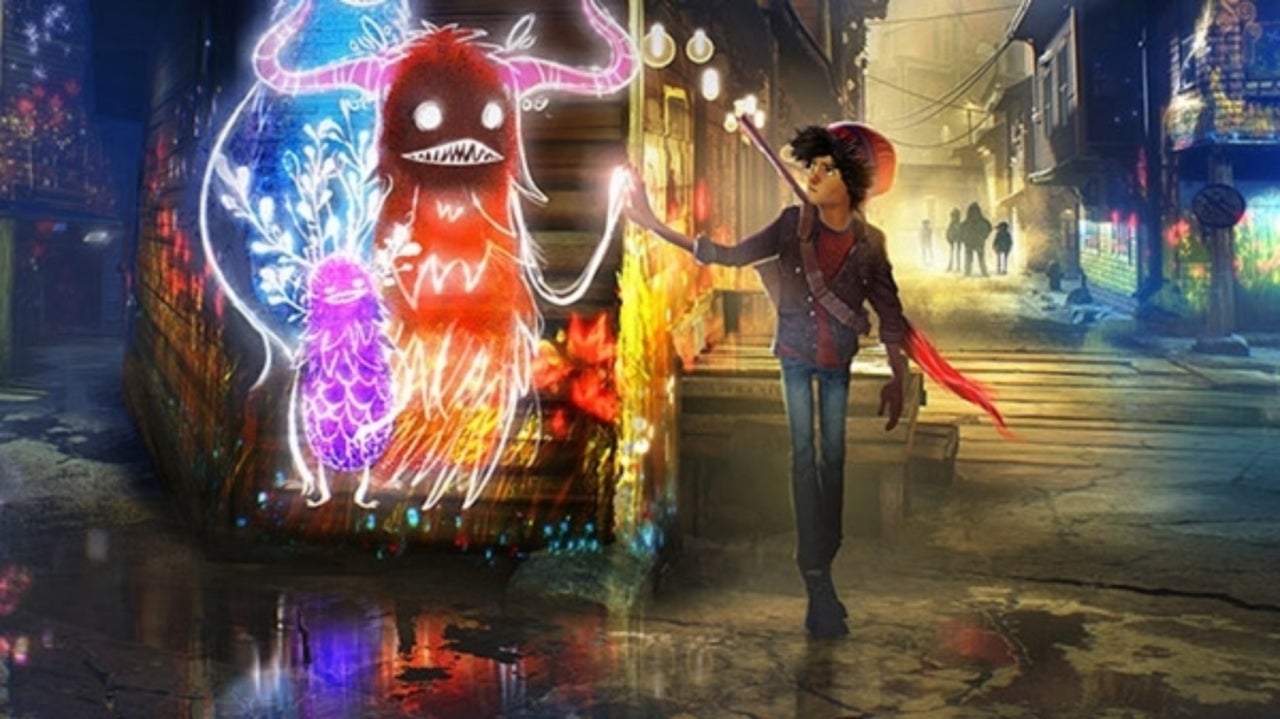 We open up on a dilapidated harbor town swarmed by kids, which paints both a bleak and heartwarming picture of what’s to come.

Ash, our hero, is fondly recalling his lovely childhood with vivid artistry, doodling on his notepad. The very first thing I do is paint, which sets the stage for the whimsy to come. Ash talks to his creations while melancholic music plays, then bullies swiftly enter the scene to rip up his book, scattering its pages. Pages…with great power. You can practically hear the movie trailer music. It’s all very Pixar-esque (including the nuance of its “villains” and the dripping metaphors), and I think it’s going to surprise a lot of people who have been on the lookout for a family game. The humanity of Ash’s story, and the practical reasons why this town is derelict, mesh well with the fantasy elements of living drawings and a mysterious corruptive force.

It’s also nice to hear from Ash directly. He has a history with this world and speaks to not only us, but the cast directly. Lore is similarly both direct (collectibles) or indirect. None of it is force-fed, as PixelOpus struck the right amount of balance to ensure that nothing is too pixel-hunty or vague. In part, it’s because Concrete Genie‘s beautiful locales tell their own story, evoking both wonder and fear. The stop-motion faces reminiscent of Laika’s work will probably be polarizing to some, but suit the style. As expected, a game that features fantastic art has a fantastic UI with flexible options (three difficulty settings by default, control adjustments).

This is far from a pure walking simulator though. It’s a 3D platformer second, and although some of the jumps feel dodgy, it’s much easier to get over when you instantly respawn exactly where you fell. Painting is done by harmless motion controls or with the right stick, and you’ll use it to accomplish three goals: crafting murals on the wall, creating life by painting genies (here’s what it looks like before and after you give them souls), and illuminating the universe. This is light fare. Even though combat is introduced near the very end of the journey, you’re not going to be dodging bosses hoping for iFrames. Ash doesn’t triple-jump and backflip into a glide like a character-driven action game.

In your quest to gather up all your pages and rid the world of darkness, genies will sometimes solve puzzles for you, like burning down a door on their wall. It’s your job to climb around and find new areas, keep them happy, and set them up for success, which you’ll do by painting various objects onto walls and using a super paint substance to clear out minor darkness obstacles. There are several types of genies with different powers (wind, electricity, and so on), so on occasion you’ll need to think outside of the box.

It’s an adorably fun loop. You create, help, and play with cute creatures you designed, get more parts to make more absurd monsters, then paint a masterpiece and cleanse one part of the (smallish) hub to spur the narrative. Much of it is guided, which cuts down on the frustration factor. It’s a familiar open world concept that feels less tedious, less insidious: but also less comprehensive and granular, if that matters to you. 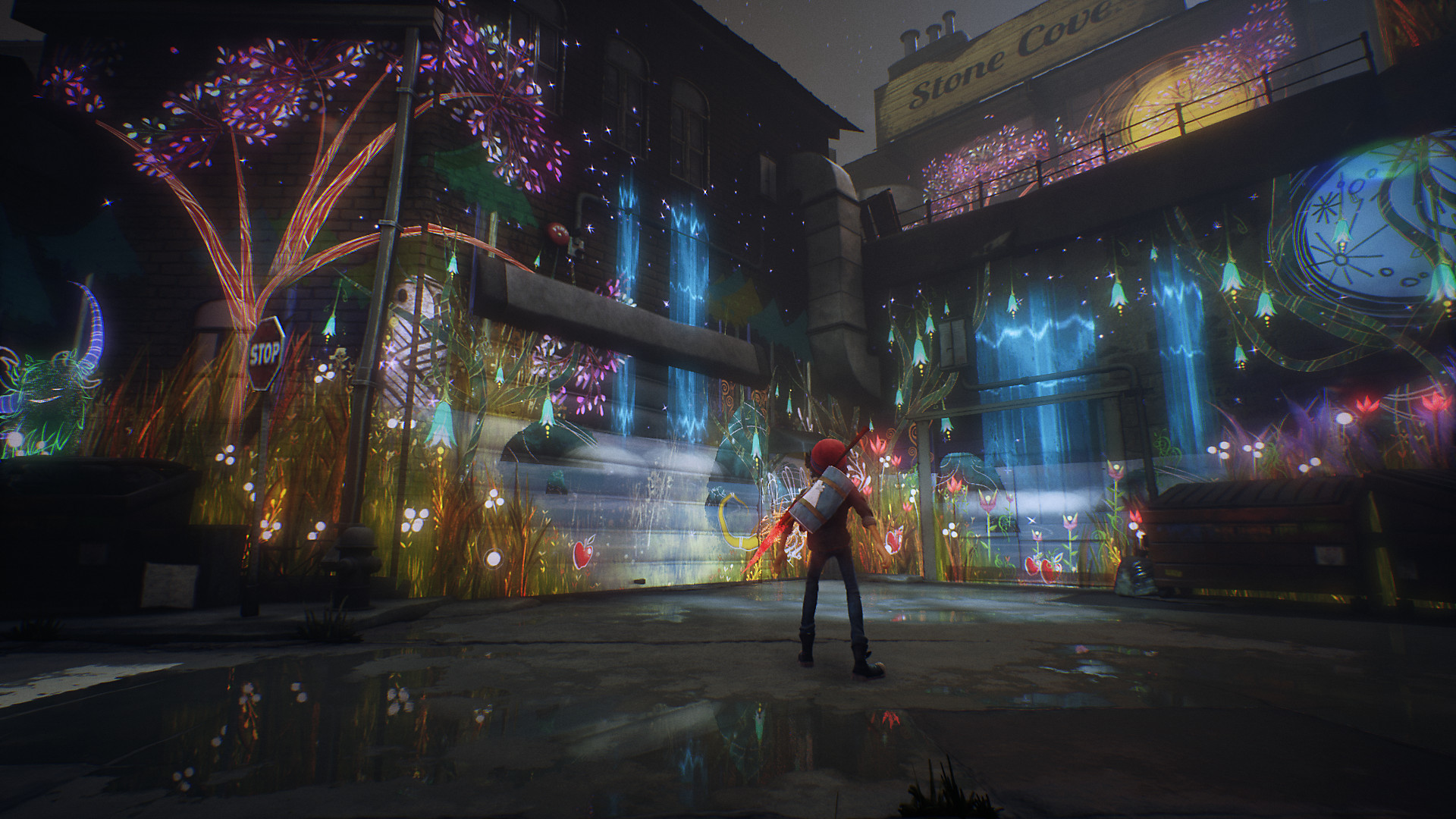 Concrete Genie‘s chief sin is that I want more of it, but the pacing does falter in the final act. Things start to get tidied up a little quicker than I’d like in a race to the finish, both from a mechanical and narrative standpoint. Forcing combat (again, near the very end, so it stings less) feels like an odd, perhaps executive decision, and I would have preferred if it wasn’t present at all. With that in mind, PixelOpus still managed to stick the landing in this seven-ish-hour odyssey.

Beyond the campaign there’s also a “VR experience,” which does not allow you to play through the entire game with the PSVR headset. Instead, it’s more like a side mode that focuses on painting (two PS Move remotes are required by the way), with an even more relaxed, sensory bedrock. I won’t spoil the unique take that VR offers here, but suffice to say it’s a great appetizer for the main game. Another separate “free paint” option accomplishes the same thing, albeit with more meandering.

Sometimes it’s okay to just unwind with a lower-stakes adventure, and that’s where Concrete Genie comes in. It might not be on a lot of Game of the Year lists, sell as well as other open world games, or even be referred to as a “classic” in the years to come. But I’ll never forget it. Go in with an open mind and a few caveats.