Serina is objectively the Best Girl.

You play as a gifted disciple with more magical Ether power than anyone else on the planet, so much so that elders are sure that you fit the bill as the prophesied one, known as God’s Gift. Seriously, they call you God’s Gift around campus.

With his nearly endless power, G.G. is the only guy around that can reliably take on the holy ritual known as Classmating. Similarly talented female classmates from your school join you in a church for some one-on-one time to make Star Children that can be put into parties and used in battle. It’s dad, one of seven moms, and up to nine children, going into battle together — a family affair. 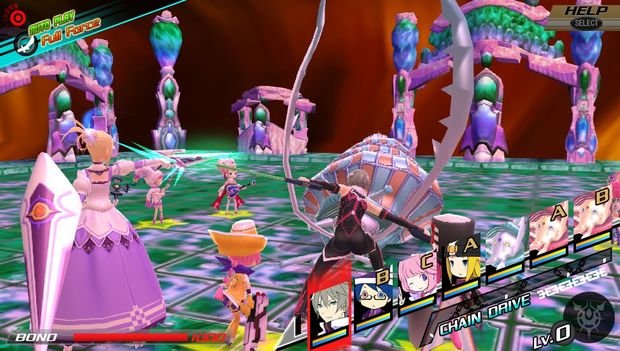 The whole fam goes into dungeons that have sprung up all over the world of Aterra in an effort to clear them out and save the world. These dungeons, called Dusk Circles, have begun opening up in the ground, with monsters flowing out and taking over the land. Only God’s Gift has the power to enter them and take down the monstrous seed that fuels them.

Conception II’s dungeons are randomly generated, and consist of a string of rooms and hallways that are packed with monsters and loot. These are presented in 3D, in a three-quarters view, much like the most recent Persona games. You’ll run through them with your family, either dodging or attacking roaming monsters, looking for the portal that will warp you to the next floor down. At the bottom awaits a boss that you’ll have to take out to sterilize the Dusk Circle completely. 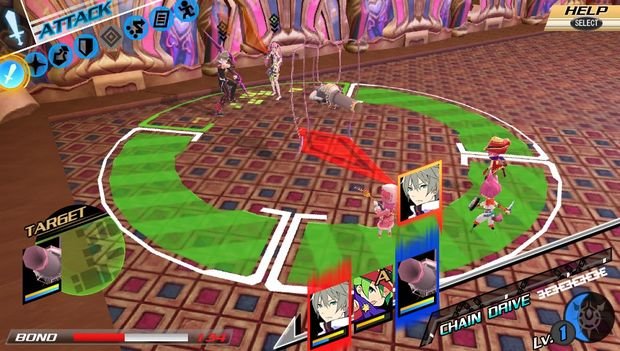 The battle system of Conception II is turn-based, but with some interesting twists. It uses a positioning system that has your party broken up into up to four groups — you and mommy, and three groups of three children — that can be placed in any of the four positions surrounding an enemy. One or more of these positions is a weak spot for the enemy, which would be the prime placement for attacking. But taking the risk and attacking from a defended or vulnerable position will have you building up your chain meter. A filled chain meter will change the order of battle in your favor, letting you pummel the enemy with the whole family instead of having to wait for your turn.

In the earliest battles, these systems don’t feel very useful, and players won’t likely appreciate the depth this positional system offers right off. But as the battles grow to be more challenging, staying on top of turn order and maximizing the Chain Drive’s advantage becomes key. It’s slow to come together, but when it does, it’s great. 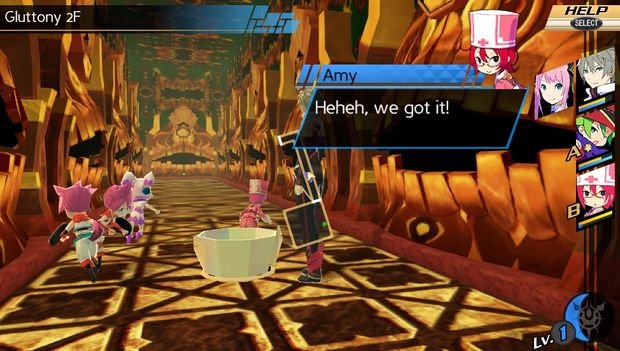 Beyond the Chain Drive, here’s an Ether Density system that, once topped out, can bring you even more advantages in battle. At its top level, you and your party will be much faster than the enemy, letting you get more attacks in. This gauge is built up by getting attacks in, but can also be increased by skills and other perks. It’s another risk/reward system that ties into to two others to keep you on your toes.

There’s more fun to be had with heroine-specific special attacks that are only triggered once the family is put into a certain position. And the Star Children themselves can combine into a robot, Voltron style, through their Mecunite skill to turn the tide in battle. And yes, it’s as funny as it sounds.

Over the course of the full game, I went from being bored of the battle system to being fully engaged by it. After you understand and implement these systems and learn their intricacies, the battle system grows on you. Hang in there — it’s worth it. 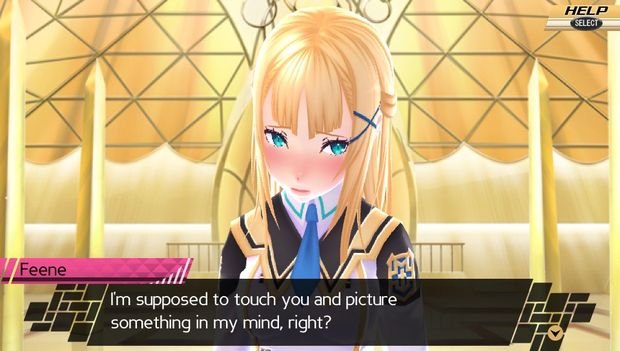 When you’re not dungeon crawling, you are back at school, doing the social thing, trying to keep relationships up between the seven girls. You’re only allowed three actions at a time, though, so you’ll have to pick which girls you’d like to get closer to in the end. You’ll have to head back into the dungeon and wait until your chances to interact are refilled.

Being God’s Gift, everyone in school is a fan of yours, and all the girls have eyes for you. But you’ve got to really work through hairy situations and dialogue trees to win the hearts of your favorite girls over. You’ll flirt at first, getting to know each other better, but will eventually end up going on dates together around town. Each of the seven girls has their own storyline to work through, and I’m pleased to say that they weren’t nearly as shallow as I was expecting them to be. They actually ended up being a lot of fun to work through.

The Classmating side of the game is closely tied into the dating aspects. If the girl of your choice isn’t in a good mood, no baby making will be permitted. She has to be happy, and to keep her this way, you’ll have to talk to her, buy her gifts, take her into battle, and go on dates with her. 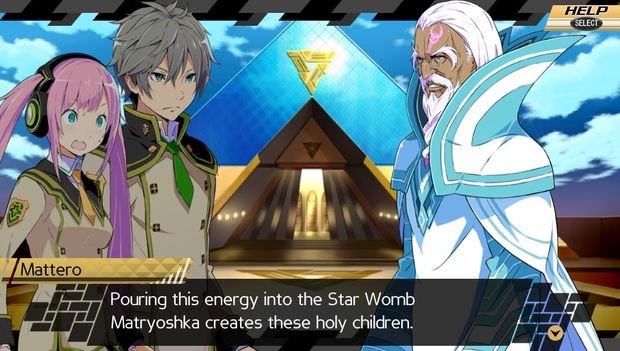 If you have a happy girl and enough Bond Points, you can enter the church where two souls come together into a vessel called a Matryoshka. The lights go down, naughty neon flashes of nude, nipple-less bodies are shown writhing around, a hilarious R&B-style love song plays, and finally hands are joined as the scene fades out. And then a baby pops out of the Matryoshka as an equally hilarious song sings: Congratulations on your new arrival!

The whole process is super suggestive. Sure, the only contact shown is some hand holding. But the dialogue that follows the ritual is about as suggestive as they could manage. Expect lots of blushing, panting, and awkward situations. I’m sure they had fun with this one in the localization department. 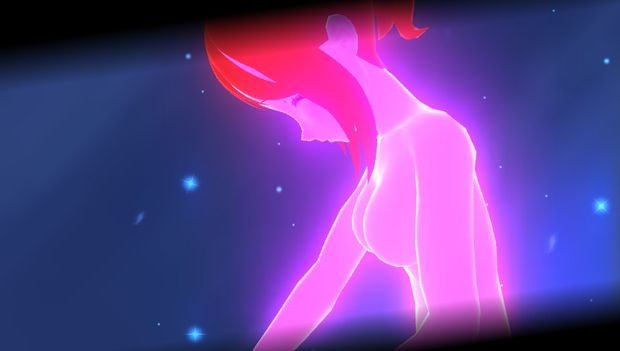 Beyond all of the dating and mating, there’s a Star Children sub-management aspect to keep up with. As you’ll be making dozens of babies, you’ll have more than you know what to do with. Babies with topped-out levels can be sent out on their own to increase the city’s level, which opens up new facilities to visit as well as new items in shops. New city locations like a gift shop and day camp can be unlocked by sending your children off on their own.

Conception II‘s loop will have you going into battle until you can’t hang anymore, heading out back into the city to heal up, checking in on optional quests, going on three dates, talking to NPCs, making babies with your earned Bond Points, equipping new items, and then going into battle again. It’s a loop full of things to do, but somehow its lack of variety started to wear on me after awhile. The city/dating/social side is usually entertaining, but the dungeons all start to look the same, and the lack of variety of monster types doesn’t help much. If it wasn’t for the steadily increasing challenge and the end-of-dungeon boss fights, I would have fully lost interest in the battle side of the game. 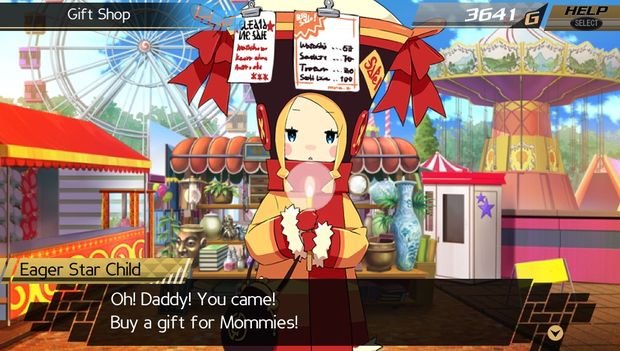 Conception II looks excellent on the PS Vita. The presentation is sharp and clean, looking even better than Persona 4 Golden on that front. The 3D dungeon crawling and battling feature detailed backgrounds and monsters, and the special attack animations are a treat. Outside of battle, there’s lots of outstanding 2D art for each and every screen, and much of it has subtle animation to keep you entertained through dialogue screens. Your dates with the girls are in full 3D, and are done so well that they seem to pop off the Vita’s screen. I don’t know if it was necessary to put boob jiggle in literally every scene that the girls move in, 2D or 3D, but I suppose it comes with the territory.

Conception II also sounds great with its J-pop-ish dance-y soundtrack. Upbeat songs keep you marching through the dungeons while quirky themes underscore the dating and social side of the game. And the aforementioned vocal pieces that set the stage for Classmating and baby arrival are solid gold. Even after hearing them dozens of times I still laugh at them.

The voice work falls flat most of the time, save for a couple of the heroines’ voices, one of which has the most adorable voice I’ve heard. But I’d rather hear the worst of the heroine’s voices all day than hear a minute of the protagonist’s voice. He sounds so dry and cheesy, and the one-word blurts tied to his dialogue are so annoying that I found myself wishing for an option to mute only him. 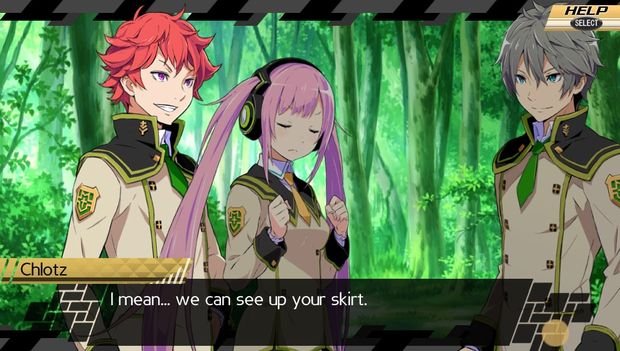 With its incessant jiggly boobs, drab story, naughty baby-making imagery, and harem tropes-a-plenty, I’d get why some would steer clear of Conception II. But I’m here to recommend it. The dating side is just interesting enough to keep you roped in, and the battle system grows on you after a bit of time to be something pretty rewarding. When I got into it, I couldn’t put this game down. Outside the music and presentation, it’s not outstanding in any way, but the mix of dungeon crawling and dating sim worked for me.