“A game that captures pictures of you when you pose to build levels for your character to platform on? This is gonna be a blast,” I thought naively as I excitedly volunteered to review Commander Cherry’s Puzzled Journey, “Finally something I can use my Kinect for!”

Note to self: Never, ever, ever volunteer to review a Kinect game again, no matter how cool it might look. 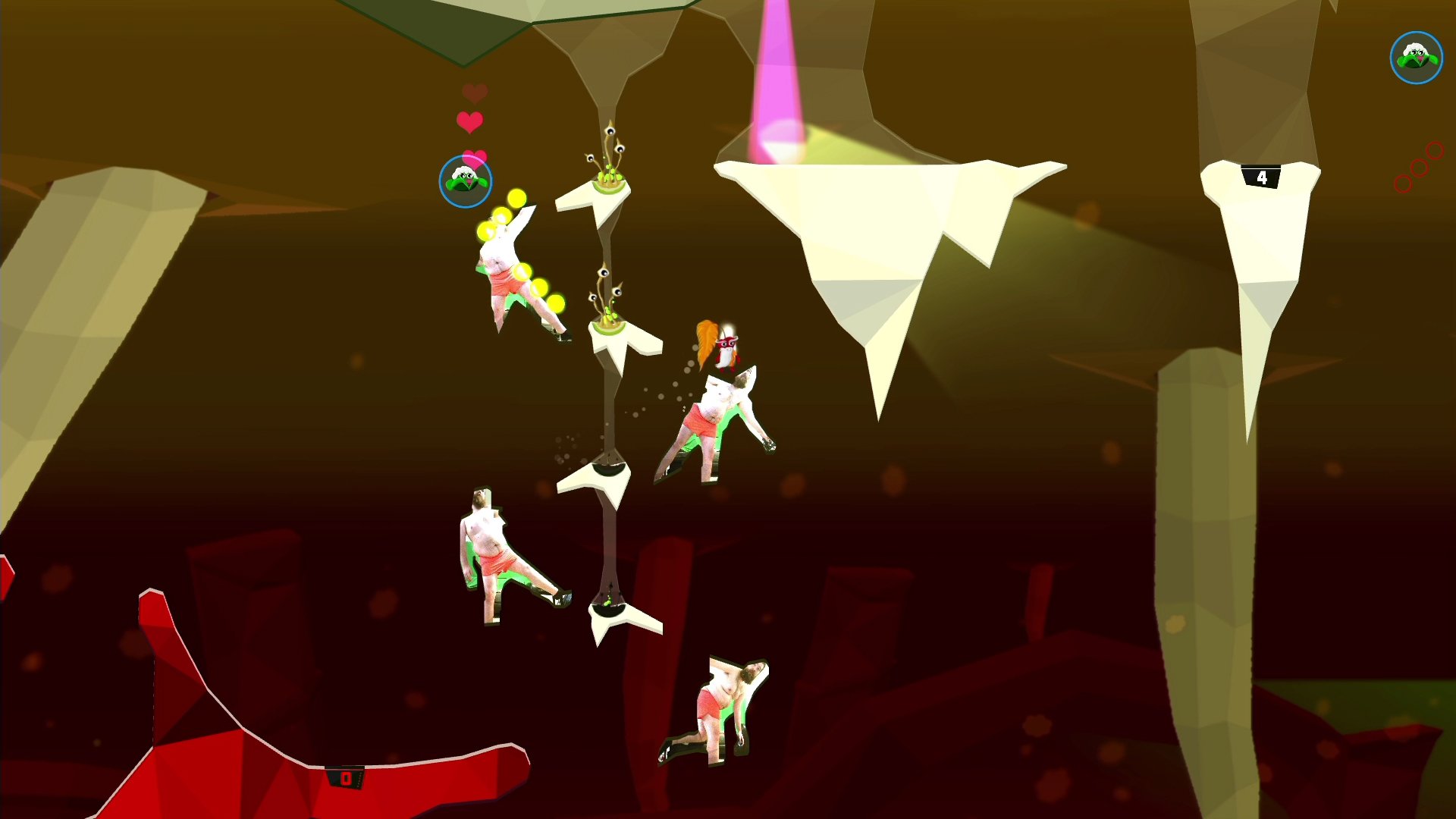 Think of the most basic indie platformer you’ve ever played with minimal graphics and okay at best platforming mechanics, because that is what Commander Cherry’s Puzzled Journey is, only worse.

Commander Cherry has to get from one side of the ten available levels to the other, using snapshots of your body taken with the Xbox One Kinect or the Playstation Eye as platforms. When posing for pictures you’ll have to position yourself so the edges of your body touch red circles causing them to light up, thus making them collectible for Commander Cherry. These yellow dots must be collected to allow advancement to the next part of the level and granting you a rating of yo, yoga, or yogawesome depending on how well you performed, then rinse and repeat for what felt like a billion times.

Here’s the thing about capturing your body in crazy poses: in theory it sounds great, but in practice the functionality blows. The Kinect was picking up like half my arms, half my face, and half my legs. On top of that, the detection wasn’t that great, often times leaving wide areas of the room behind me in the picture, instead of cropping me out. So don’t be fooled by Commander Cherry’s original trailer, it certainly doesn’t work as well as I was led to believe it was; foolish me.

As far as the actual platforming goes it could be better. Early on you’re asked to press a button that shows you all what all the controls are, only you can’t do two of the functions yet: double jump and laser. You can only double jump if you have a power-up that turns your weak mustache into a long wizard-like beard, but the game doesn’t tell you that as the control screen just says “Hold A to double jump” which isn’t even how you double jump once you have the ability! The laser is granted to you in later levels allowing you to cut through your snapshots of yourself, which helps a great deal and should have been available from the start.

Speaking of available from the start, double jump should have been as well. The platforming isn’t exactly smooth, and most of the time I only found myself able to make it through sections when I had the power-up. The double jump power-up is lost upon falling to your death or hitting the weird eyeball grass and oranges that shoot flames, much like the super mushroom power-up in Super Mario Bros. The big difference between this and Super Mario Bros. is the added double jump ability; getting hit as Mario makes you smaller and harder to hit versus in Commander Cherry it just causes you to lose functionality and makes the game harder.

Because of this I started to purposefully kill myself three times in a row when I lost the double jump ability, as it causes a power-up to spawn for you. Nothing says “this might not be a great idea” like someone playing your game and killing themselves deliberately to make your game even remotely possible let alone enjoyable. 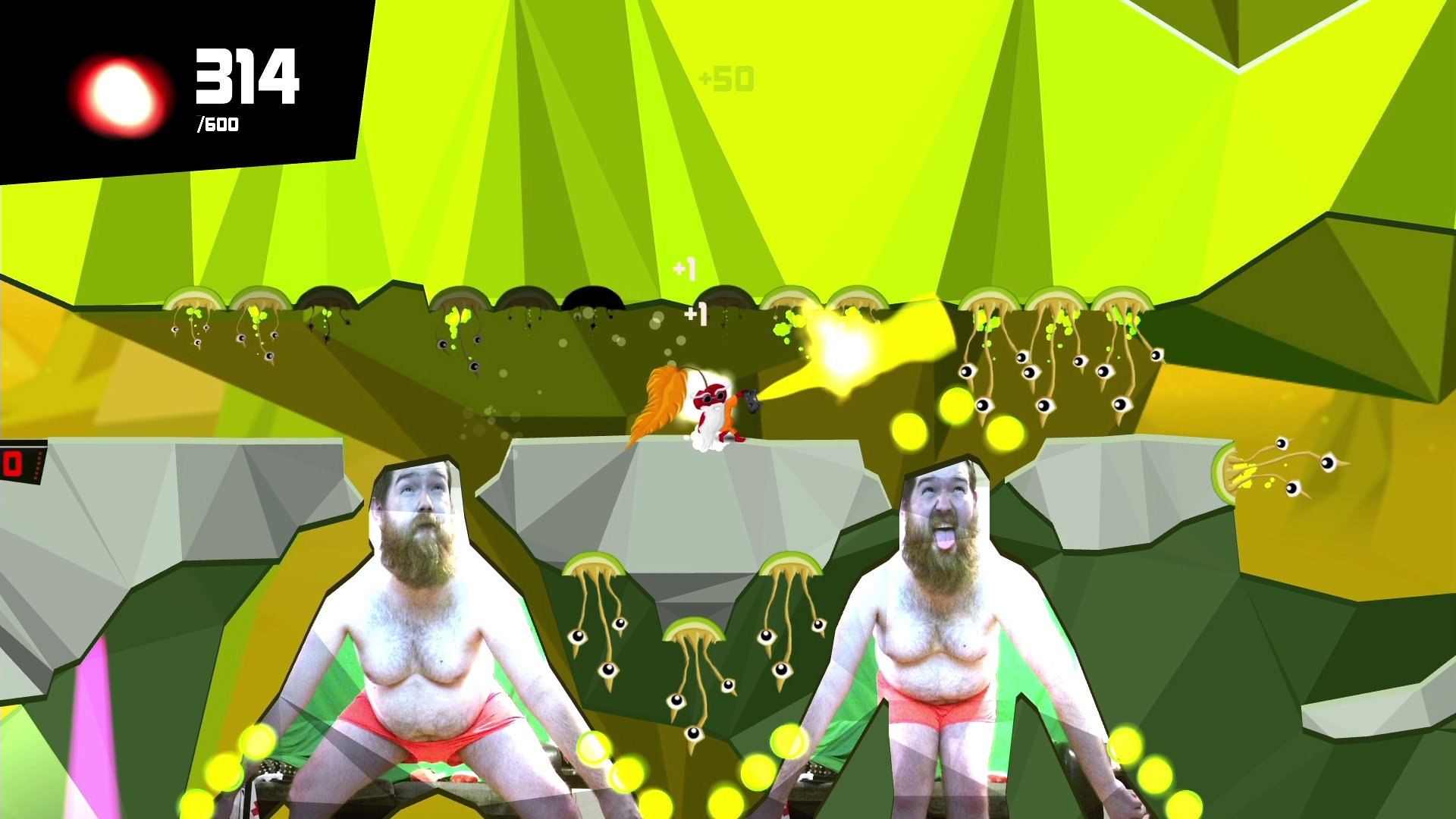 I’m clearly not in shape, at all — though Seaman once told me round is indeed a shape — but I didn’t have much trouble posing to complete the platforming puzzles. Poses start with just making basic platforms to guide your character across, but eventually add other mechanics, like avoiding touching grass-like eyeballs, blocking firebreath from oranges, and bodies that move when you have Commander Cherry jump on them.

The problem is it gets tedious when sometimes you’re asked to make up to six poses for one section while holding the controller in your hand and contorting your body in all different positions. It just wasn’t fun, and eventually I had to take a break as my knees, and back started to ache a bit. Later on I figured out I could just play while sitting in my chair closer to the camera, and totally cheesed my way through the final levels with no shame.

All the levels look pretty similar, just bland textureless polygons, and what music there was was pretty forgettable, just like the rest of the game. With only ten levels you’d think Commander Cherry’s Puzzled Journey was over far too soon, but it was quite the opposite; I couldn’t wait for this yoga-like Hell to be over. Knowing the game was made by only two people makes me feel a bit like a yogasshole by saying this game is yogawful, but this is one cherry pit I couldn’t wait to spit out.