People keep saying this: “Code of Princess is being called the spiritual successor to Sega Saturn classic Guardian Heroes.”

Say it once or twice and my interest is piqued. Say it any more than that and I get defensive. Why? Treasure’s Guardian Heroes still stands as my favorite side-scrolling 2D beat-’em-up of all time, and one of my favorite games ever. Spiritual successor? If it’s to be anything like actual sequel Advance Guardian Heroes you can keep it.

But then I played it. Saw what they meant. Felt what they were talking about. And now, several days later, my right thumb and palm are nearly numb from constant play, and it hurts a bit to be typing this review. I’m now a bit concerned about the d-pad of my new 3DS XL as I’ve been mashing directional commands into it non-stop. This all reminds me of how I’d practically ruin Sega Saturn controllers in multiplayer sessions with friends.

That said, I can’t spend this whole review comparing Code of Princess to Guardian Heroes, as similar as they are. Thankfully, judged on its own merits, Code of Princess is one of the best beat-’em-up RPGs I’ve ever played.

The whole princess and her ragtag group of friends save the kingdom and world story won’t blow you away, but the outfit of Code of Princess‘ heroine, Solange Blanchefleur de Lux, might. This blonde, busty, and barely clothed princess of DeLuxia is the only one capable of wielding the massive blade known as DeLuxcalibur. She joins an unlikely group which includes a mouthy thief, a necromancer made up of spare body parts that wears white panties, an Elf bard that plays electric guitar, and a fighter that seems to have an animal fetish, among others. They come together defeat the monsters that have suddenly taken over, working to eventually restore Solange’s kingdom.

If this all sounds silly to you, then you’re getting what Agatsuma Entertainment and Atlus were going for. Code of Princess is very silly, and one of the things I love most about this game is that it never takes itself too seriously. While the development team did a fantastic job with the character design and story, Atlus should be commended for the top-notch localization for this title. With the writing, it is apparent that great care was taken to make sure that this cliched story did not fall flat. Instead, we are treated to the humor and cleverness that we’ve become accustomed to in Atlus USA localizations. What really sold the localization was the voice work, though. All dialogue is fully voiced in Code of Princess, and every line is performed beautifully. Outstanding job on both fronts, Atlus. 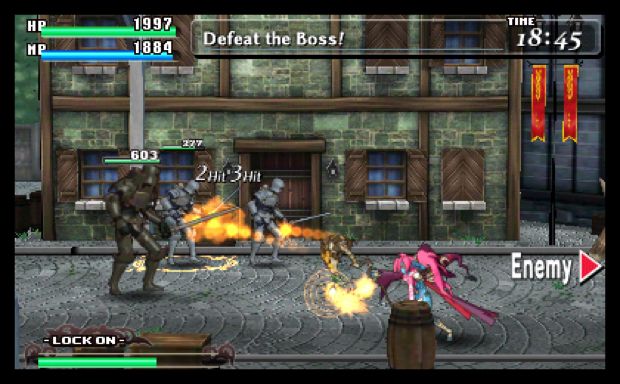 Code of Princess is a 2D side-scrolling beat-’em-up with action-RPG leveling elements, just like the beloved Guardian Heroes. I’m glad to say that it’s a near-perfect match as far as these aspects go; the combat engine is exquisite. While it takes a few slashes to get used to the timing, you’ll be comboing and juggling within no time. Buttons for light and heavy attacks give you the basics, and directional inputs before these buttons, like double-tapped directions and quarter-circle sweeps, trigger special moves. Just about every attack can be chained into the next, and the game has no issue with you mercilessly juggling enemies until they’re dead.

Combat takes place on open fields with pretty static backdrops, but you’ll be too busy hopping between three or more planes (just like Guardian Heroes) to notice. Jumping from the foreplane to the mid and rear ones gives a pseudo-3D feeling to the fighting, letting you move to dodge projectiles or take a breather from enemy attacks. Though it always looks neat, outside a couple of specific boss battles, moving between these planes felt unnecessary. Another problem is that being on the rear plane had me struggling to see my character among the hordes of enemy sprites, even on the larger 3DS XL screen. For these reasons I tried to stay on the foreplane as much as possible. 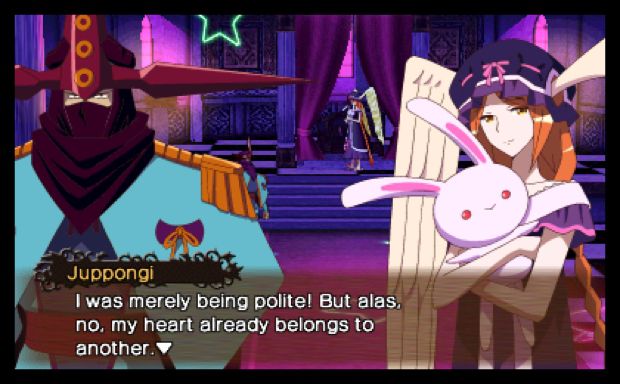 I had a blast playing all of the cast of characters, but heroine Solange and her massive sword really had me appreciating the combat engine the most. Her slow and heavy swings leave her vulnerable, but when they hit, they hit hard. I saved these swings for openings or finishing hits, opting instead to knock a large bundle of enemies up in the air (down, down, A) and then jumping up to meet them before continually hitting them back and forth to wear them down in an endless floating juggle. Just about every cast member and even NPCs become playable characters eventually, and I had a blast developing my own combat strategies with each of them.

Code of Princess has a leveling system straight out of an action-RPG. Successfully completing a battle gives you experience points that go toward a leveling bar that once filled, increases your character’s level. For each level, 5 attribute points are given to you to dump into stats like defense, attack and speed. You’re free to add them to any stat you wish, though you’ll find that the game is more manageable with a well-balanced character. I speak from experiences, as my super-strong characters were practically defenseless and pretty pathetic in some of the game’s later battles.

Further customization can be found in the game’s item system, which lets you strap on armor, weapons and accessories to tweak character stats. Some are found in battle, others are rewarded, but most are purchased from a crazy feline named Marco Neko with gold earned from battles. Incidentally, Marco’s theme song must not go unmentioned as it ranks up there with the Persona series’ Pharmacy Theme as one of the craziest shop songs ever written. 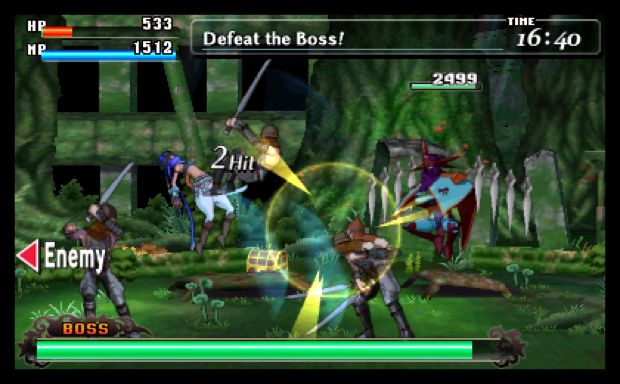 The structure of Code of Princess has you watching a short cutscene to advance the story before jumping into a battle with some objective (beat the boss, kill all enemies) to clear before a set time expires. You’ll select each ‘chapter’ to kick this off, and you’ll level your character and save upon completion. This structure makes for a perfect portable game, as you can stop at just one battle if you’re busy, or plow through several chapters if time permits. The only time this doesn’t work out is when you’re up against a battle where you’re not quite strong enough to win.

I wouldn’t call it grinding exactly, but it’s close. If you’ve been trying out different characters in each chapter (all of which start at level 1 and do not auto level as the game progresses), you’ll likely find yourself outclassed in a boss battle at some point. Code of Princess lets you replay any chapter you’ve previously finished to gain experience and gold in its Free Play mode. I found that I had to go back two or three times to do this to become strong enough to progress.

To get away from the grindy feeling, a better choice is to enjoy the game’s Bonus Mission mode, which is packed with crazy bite-sized trials to take on. These missions are unlocked as you progress through the game, and they gradually increase in difficulty (rated from 1 to 5 stars) to the point where they’re so hard that you feel like the game’s makers are laughing at you for even trying. But finally succeeding in plowing through impossibly dense masses of enemies always felt great. 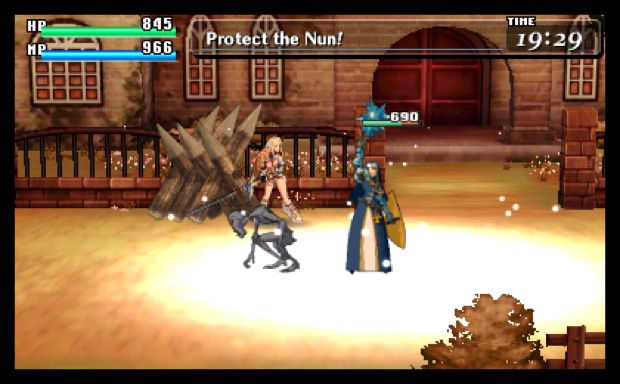 What’s nice is that Code of Princess is beautiful even when it’s kicking your ass. Big, bodacious sprites dance around the screen in some of the most incredible animation I’ve ever seen on a portable game system. Seeing such a varied, colorful cast move around with such liquid smoothness seems almost unreal at times. Some of the larger enemies and bosses are a full-blown eye candy, so much so that you feel bad for taking them down. It’s almost a shame that you’re so into the combat sometimes to think about just how lovely this game is. Screenshots and even web video will not do this game justice; you have to see it running in person.

The excellent single-player mode is complimented by some multiplayer options that allow for up to four players to play cooperatively or competitively, online or through local play. Going back to Guardian Heroes comparisons, a lot of the magic of that game was tied to plowing through the game’s story together with a few friends. Things are a bit less magical given that Code of Princess is played on a small, personal screen, and that other players might not be in the same room, but there’s still some room for fun.

I was able to try a bit of competitive play with another games writer via online connection. The standard Ranked matches let you pick any character from the game’s cast, though you won’t have access to your personal character as that might make for some unfair matches. An Ultimate mode does let you bring in your own character and item configuration, though. I beat down Alexa‘s Solange with my own to receive a leaderboard ranking, some EXP, and a couple of reward items for my performance. 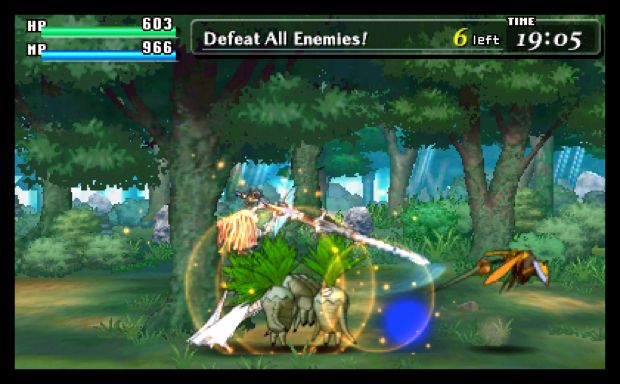 We also tried a bit of cooperative play, which lets you tackle bonus missions and completed game missions together for more experience and rewards. Unfortunately, establishing a connection proved to be pretty difficult. We found that we could only play together by using the game’s password-protected game lobby creation, and even then it wouldn’t connect half the time. When we did manage to connect and play, the enemy AI seemed lacking and dull, as if it was confused from having more than one target to go after.

I think Code of Princess will go on to be one of those cult-classic games that gamers will bring up in their ‘must-play games’ list for the 3DS, just like Guardian Heroes. It’s really that good. That ‘spiritual successor’ label? Totally worthy. This is a beautifully crafted side-scrolling beat-’em-up that has no equal on the 3DS, and the love that went into the localization makes it that much better. If you’ve found yourself longing an old-school beat-’em-up with a real substance, challenge, and polish, you owe it to yourself to check out Code of Princess.