Smash your swear jar before playing

What started out as a Kickstarter project with a meager $20,000 funding goal has been picked up by Ubisoft, of all publishers, and brought to the usual digital platforms.

At first glance, Cloudberry Kingdom may not be much to look at — and that feeling doesn’t ever go away, I’m sad to report — but the real draw is the game’s seemingly endless levels achieved through procedural generation. That, and it’s supposed to be really tough. 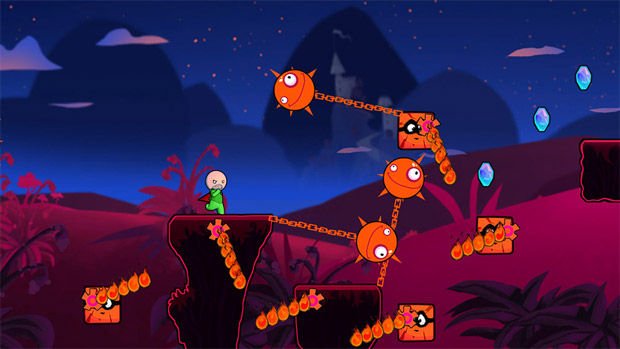 There’s a story to Cloudberry Kingdom but, similar to the art style, that’s not why you would ever play a game like this. Hercules himself Kevin Sorbo lends his voice to Bob, a washed-up hero who’s seemingly out to rescue a princess until the script gets flipped in a slightly amusing way.

If the narrative sounds throwaway, it mostly is — but that’s forgivable here, since the game’s bizarre papercraft-esque cutscenes help to break up what amounts to a couple hundred platforming levels included in the main story mode. Sometimes, you just need to catch your breath, and you’ll take whatever pause in the action you can get.

While many of these levels can be completed in a matter of seconds if you know exactly what you’re doing, let’s not kid ourselves. Much of the challenge is figuring out how you’re supposed to make it past spikes, lasers, bottomless pits, and other genre tropes. And then you have to build up the muscle memory to pull it off. This is when the swearing truly begins.

Cloudberry Kingdom‘s pacing is good all around, but there are more levels than is necessary, even if an overwhelming amount of content is supposed to be the appeal. Despite the element of randomness and quite a few building blocks for the level-creating algorithm to work with, some sections begin to drag as you become accustomed to the game’s bag of tricks.

This monotony is in part addressed through the introduction of different abilities. These include a jetpack, a double jump, the ability to flip gravity à la VVVVVV, small and large versions of yourself, and more. Some levels have you playing as a sidescrolling spaceship — because why the hell not? — while others stick your character on a pogo stick or inside of a box. Screw that box and its weird physics, by the way. It’s the worst!

These various abilities can be entirely hit or miss. With the ship, for instance, the hitbox is larger than I would’ve liked and the controls aren’t quite there from a precision standpoint. In some of the other modes where you’re switching from one type of character to another with the start of each new level, it can be disorienting given the game’s rapid pace. I like that Pwnee attempted to mix things up, but the execution could’ve used a bit more work.

In addition to the main story, there are four additional modes: Escalation, which throws increasingly tough levels at you; Time Crisis, where a timer is always draining and collectible gems add time to the clock; Hero Rush, another timed mode where you play as different character types; and lastly Hybrid Rush, an absurd amalgamation in which you’re afflicted by multiple abilities simultaneously.

That last one isn’t really fun so much as it is batshit crazy, but the others are enjoyable for what they are, especially if you’re determined to top the leaderboards. It should be mentioned that the game supports four-person co-op, a factor that can add an extra layer of chaos to the experience. I also appreciate the fact that there’s character customization to help differentiate players. If I’m going to die — which I will, over and over again — I don’t ever want it to be because my guy blended in with the background. 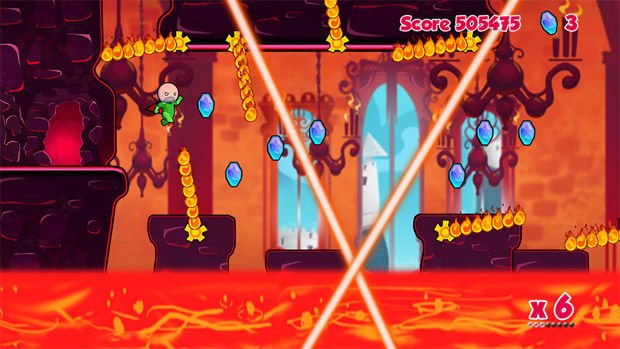 Cloudberry Kingdom may rely on procedural generation, but its levels are, in theory, all beatable by us humans. If you’re not convinced, there’s actually an option that shows the optimum path. Some of the more absurd levels can be deceptive, however: what appears impossible initially might actually be straightforward if you simply start running and don’t stop until you reach the end. It’s all about pattern recognition. That said, you can have the game craft levels that are unfathomably difficult, if you’re into that sort of thing. No judgements here.

This personalized level creation is done in Free Play mode, which lets you tinker with settings such as level length, overall difficulty, character type, character physics, and more. If the game happens to generate a level you’re especially fond of, you’re able to save it for posterity. Although Free Play might sound amazing in theory, by the time you’ve made a few solid attempts at the other modes, fatigue will begin setting in. An infinite amount of levels doesn’t do much good when they cease to become exciting to play.

Cloudberry Kingdom is a strong effort, but the lack of overall polish is impossible to overlook. I can’t say I’ve ever played a platformer that uses procedural generation in quite this way before, and I’d love to see the concept explored further. Even if certain elements of the game are inconsistent, the platforming itself feels good for the most part and the challenge presented is as formidable as advertised. That counts for a lot.