First-person shooters splintered near the turn of the millennium. Goldeneye 007, Half-Life, and Halo all had massive impacts on the genre, and their formulas would be the ones imitated for years after. The old key-hunt style of shooter practically died off, only to be revived recently. Now, the indie shooter marketplace is flooded with homages to the pre-3D accelerated years of gaming.

It’s the best time ever to start reassessing games that may have been overlooked. When it comes to leaving no stone unturned, Chasm: The Rift is one of the rockiest. Released in 1997 by Ukrainian developer Action Forms, it wasn’t one I was familiar with. As I looked into it, I saw it referred to as “poor man’s Quake” and “Eurojank.” Yet, those almost seem like terms of endearment, as it does have those that look back on it fondly. Now, General Arcade has taken to bring it back, breathing new life into it, and providing it to new audiences. Chasm: The Rift gives briefings in these cutscenes that are zoomed in really close to the characters’ faces. They look pretty decent for 1997! Apparently, someone called the Timestrikers (I’ll try my best not to refer to them as Timesplitters) are causing some trouble, and you’re just the person to stop them. With guns.

The “poor man’s Quake” comparison is pretty obvious from the start. There are blocky, grungy environments and blocky, grungy monsters walking around in them. The comparison starts falling apart once you get to later levels that take place in different time periods. Quake might have taken place in different time periods, but how would you know? Every level just looked like a bunch of derelict corridors. Some were more castle-y than others. Here, you start in metallic corridors, go back to ancient Egypt, then it’s time for a bunch of castle-y levels.

It’s also much shorter than Quake, surmountable in around 5 hours. The boss design is similarly obtuse. The weapons are different. The levels are more basic. You start to get a feeling for why Chasm: The Rift got left behind.

Much ado was made about Chasm: The Rift not being a true 3D game, lacking room-over-room design. This may seem like a weird thing to complain about, but back in the early days of first-person shooters, room-over-room was highly sought after. Pre-polygonal games competed over who could fake the effect the best, and it was considered a big attraction for full polygonal game engines.

With that in mind, Chasm: The Rift’s levels do feel rather basic. This comparison applies to both games that came before and those that came around the same time. For example, in 1997, Goldeneye 007 was released. Doom 64 came out the same year. Duke Nukem 3D was the year before. It’s not that Chasm: The Rift had bad level design, but by comparison, it was left behind before it was even launched.

However, Chasm: The Rift lets you blow off body parts. If you went to 10-year-old me and asked what she cared about more in a video game, room-over-room or dismemberment, it wouldn’t be a contest. Dismemberment all the way. More castle-y than the others

The only downside to the combat is that the weapons don’t really communicate their usage. The sawblades, for example, seem to suggest easier separation of limbs, but I never found that to be the case. Instead, the laser crossbow provided better precision and quicker results. I never found much use for the sawblades when compared to more direct weapons. Maybe some are more effective against certain enemies, but Chasm: The Rift never seems to imply this. However, it is apparent that the grenade launcher works on everything, but that’s just common sense.

Aside from that, however, gunplay is absolutely solid. While the confined levels don’t really let you stretch your legs and confront hordes of enemies, the speed and impact feel pretty good. It’s exactly what I look for in a shooter.

If there’s an issue with the combat, it’s that you never really face more than three or four enemies at a time. The levels are too cramped, which can also be an issue when you want to break out the grenade launcher. You’re never afforded a lot of space to be really mobile, and splash damage definitely isn’t your friend. This is made use of when confronting bosses, as there’s always a trick to beating them, but in general, it’s not very complimentary to the combat.

That said, I wouldn’t say Chasm: The Rift is truly deserving of being called Eurojank. Outside of a few instances, it doesn’t really feel that janky. Maybe that’s due to the work put into porting it, but it’s a rather solid product for what it is. Not perfect, but maybe not down to the levels of jank. 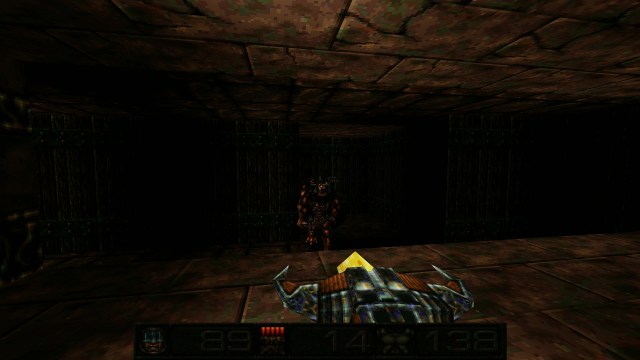 The port of the engine is extremely well done. A lot of care was taken to modernize things without taking too much from the original release’s design. I did have some issues with the darkness and shadows, but everything can be adjusted. It reminds me of Nightdive Studios’ handiwork, as it’s a much better conversion than what you’d typically expect for a niche title. Rather than package it with DOSbox and send it out into the world, it runs beautifully on modern systems.

It’s also worth noting that the add-on levels and the original version of the game are included as part of the package.

As it went with Powerslave: Exhumed, while the game is maybe not the apogee of its time, its modernization of it is still extremely appreciated. Maybe it won’t blow your mind, but the care put into its rejuvenation is infectious. You can see the love that went into the final product, and that just makes you love it all the more. Maybe it’s not quite love that I feel when playing Chasm: The Rift, but after playing it, all I want to say is, “more of this, please.”