Charlie Murder is a game that aims incredibly high. In addition to presenting an truly unique and fluid art style, it adds a compelling soundtrack to the mix, as well as a whole host of gameplay mechanics, on top of an RPG-like stat and inventory system.

Not everything works out exactly how Ska Studios hoped it would, but beneath all of the questionable design decisions lies an incredibly interesting beat ’em up that makes quite an effort to break the mold. 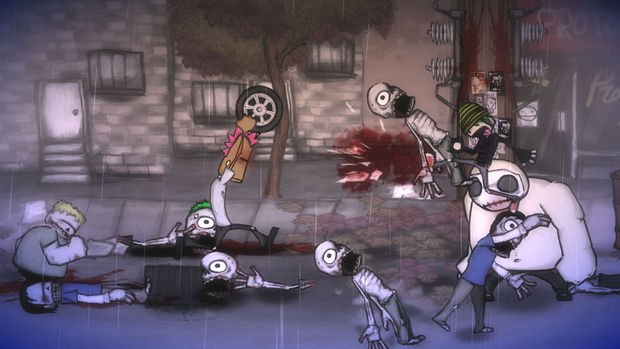 Right after choosing one of five selectable characters in the starting moments of Charlie Murder, you’ll die, fight off the denizens of hell, and be reborn into hell on Earth. From there, it doesn’t really let up. Ska Studios has come a long way since Dishwasher, and it really shows in the entire presentation of Charlie Murder. All of the game’s characters, from the lowly fiend, to Charlie’s Band, to the final boss all exude personality, and there are so many enemy types it’s impossible to guess what’s coming next.

The soundtrack is also top-notch, and one of the best I’ve ever heard in a videogame. I really dig the rock style, and not only does it perfectly fit the game, but it’s also atmospheric when it needs to be, and I heartily enjoyed listening to some of the game’s tunes outside of the confines of Charlie Murder.

Murder‘s narrative is framed around revenge, fame, and personal relationships (and of course, the end of days) — at times, it can get pretty poignant. There are some really cool bits involving scenes that paint a fairly unfavorable view of Charlie and his band, which is rather unique for a genre that usually is content with delivering simplistic plots.

There are some cool flashbacks detailing the band before the game’s equivalent apocalypse (including an appearance on a faux-David Letterman program), but those scenes are very few and far between. I really loved seeing these characters through a method of minimal storytelling, with hardly any dialog or even actions. But then you get right back to the grind, slapping around the undead for around 30 minutes before another one of these sequences pops up.

One of my favorite aspects in particular involves a radio program with callers, talking about the current state of the world and the band itself (GTA style) — but this bit only plays in certain safe zones, forcing you to stay put in boredom while you listen to it. On top of that, it repeats itself frequently, to the point where you’ll just begin to ignore it. I wish the game had more of these parts, as Charlie Murder really shines within the cracks of its world we occasionally get to peer into — we just don’t get to see it often enough.

Having said that, Charlie Murder is a very serviceable beat ’em up, and I don’t really have many issues with the actual combat mechanics. Through the use of a two-button system, you’ll hack and slash your way through some of the best enemy designs I’ve seen in the genre, and utilize a wide variety of abilities and tools to do so. 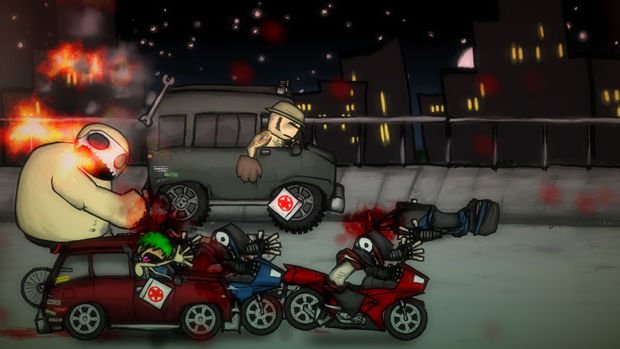 Boss and mini-boss battles are frequent, and some of them can even come right after another. There are some highlights, a few duds, and a few lazy bits of AI, but overall the game does a good job of keeping you on your toes, without forcing you to battle hordes of the same foe over and over again. There are droves of environmental traps, melee weapons, guns, and much more to spice things up as well.

In terms of variety, Charlie Murder really mixes things up with shoot-’em-up portions, rhythm games, and some other unique mini-games. One minute you could be beating up an unplanned mini-boss right after a big boss fight, and the next, you could be throwing a tiny creature over a fence to eat some trash. These portions of the game are brief enough to not overstay their welcome, thankfully.

To augment the combat, you can pick up or buy pieces of armor and weapons, all of which can be displayed on your character (or turned off for aesthetic reasons). Itemization is an odd creature in Charlie Murder, because it’s kind of just there. One minute you’ll be spending hundreds of dollars on a brand spanking new weapon or piece of armor in a shop, and the next, you’ll best some super easy mini-boss for something with a considerably better statline. Although it’s never really enough to get in the way of having a good time, the equipment design was never really thought all the way through, and it’s really evident from the first moment you step inside of a shop.

It’s also very strange that the game gives you a maximum inventory allotment, but lets you fill said allotment with any item of your choosing. So for example, if you want to fill your entire bag with health potions, you can literally buy 50 health potions at a nominal cost, and use them all on one boss fight (with a paltry 10 second cooldown). I didn’t realize this until three quarters of the way through the game, and it really felt like an oversight. 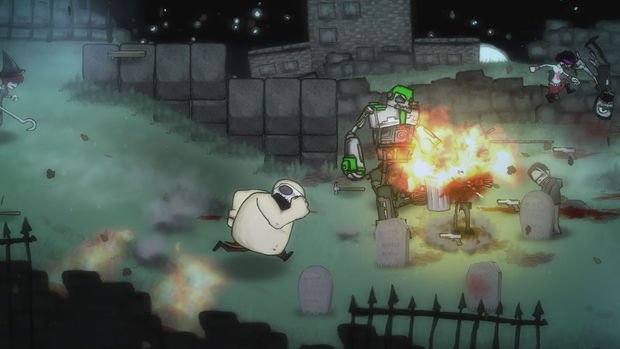 You’ll level up your statline and acquire your skills through your in-game Windows 8 Phone, which functions as your all encompassing character menu. While the Windows 8 Phone UI is a noble attempt to really draw the player into its world (similar to Dead Space‘s on-screen suit UI), the screen itself is tiny, and even when zooming in it can be a pain to read.

It also doesn’t help that most of the game’s intricacies are described in the game’s email system through the phone, which gets extremely annoying when you have a hundred or so messages to read, some of which can be nondescript or cryptic. It also features a fake Twitter app that’s not as engaging as Ridiculous Fishing‘s, but the ability to scan QR codes in the environment to unlock cash or item upgrades is a nice touch.

One aspect of the character building system I did like was the tattoo mechanic, which basically translates to class-specific spells. Different characters have slightly different abilities, but barring one or two stark changes, most of them operate in the same manner, and usually involve a party-wide or individual buff. To add on top of spells and items, Charlie Murder also has an RPG-like stat system. You’re allowed to allocate your points towards Strength, Speed, Defense, and Anarchy (spells) ratings, but they cap out based on your level, so you can never truly min-max. 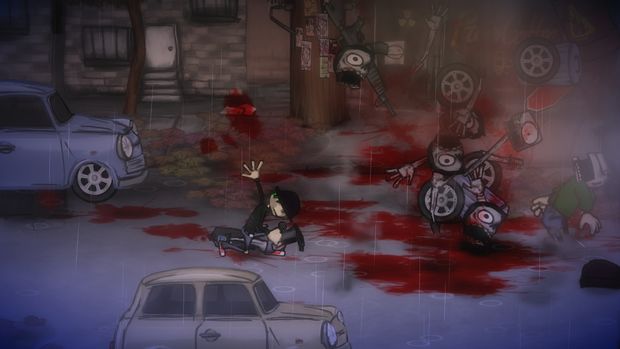 There’s also tons of secrets to be found past hunting down all the cleverly disguised QR codes, as well as a secret ending and boss, hidden areas, and even extra mini-bosses. Charlie Murder also has a PVP arena, and two more difficulties to tackle after you’ve beaten the game. This is a beat ’em up truly packed with content, one that will satisfy the solo or four-player co-op fan alike for hours on end. Support for online play also helps, but it’s kind of strange that the game limits the party to one slot per unique character, as it prevents friends from playing with each other if they happened to level up the same person (for instance, two Charlies cannot play with each other).

Charlie Murder has flashes of brilliance, and flashes of normalcy throughout its very up and down campaign. Some aspects feel like the developers were just going through the motions, and some feel truly innovative and fresh. But despite the uneven feel, there’s a solid foundation underneath Charlie Murder, and fans of beat ’em ups will find plenty to enjoy as they bash their way through hordes of the undead while listening to a pretty kickass soundtrack.