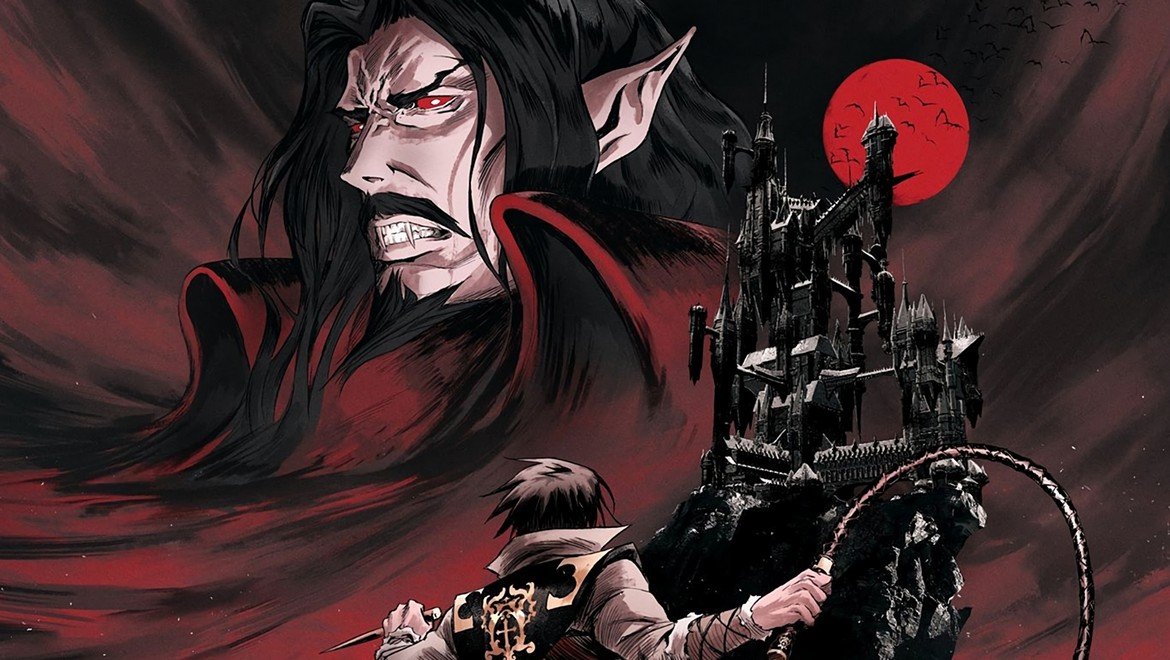 Let us go out this night for exposition

(Note: This is a spoiler-free review of the first six episodes of Castlevania Season 2, however, there will be spoilers for Season 1)

The first season of Castlevania was a surprise that I’m not sure many people were expecting. It was a solid, albeit short, four-episode season that did everything you would expect from a Castlevania animated series. There were dozens of monsters that needed to be killed, a Belmont, and a pissed off Dracula that wanted to exterminate all human life. Still, its short length really hampered any enthusiasm I had for the season. Just as things were started to get good, the season was over. It felt more like a proof of concept than anything else.

Thankfully, we have a second season that gives us eight episodes and expands the story way more than the first season. If the first season was all about action and grizzly entertainment, then season two is more determined to get across the plot and character motivations. Unfortunately, this approach means that the series never hits the same high points in action as the first, though makes up for it with a deeper examination of Dracula, his cause, and his chosen allies.

The second season picks up immediately after the first season, with Trevor beginning his journey with Alucard and Sypha to stop Dracula once and for all. Trevor still isn’t the biggest fan of Alucard, partly due to him being Dracula’s son and mostly because Alucard just tried to kill him, but they’re going to have to put their differences aside for their upcoming battle. Meanwhile, Dracula is assembling his army of vampires, monsters, and human sympathizers to lay waste to the human world, not realizing that his eradication of all humans may cause some dissent in his ranks from monsters that need humans to survive.

I know that there were some comparisons to Game of Thrones that could have been thrown at the first season, but now the Game of Thrones comparisons are front and center. We spend more time this season dealing with military planning and possible GoT styled betrayals, garden scenes included, than actual action this time around. The majority of the second season is centered on expanding on the cast of characters and their relationships between each other, which I’d normally be for, but when the first season was so focused on over-the-top action instead of telling its story, it makes the second season really feel like a different show at times.

Not to say that any of that is bad, given how excellent the voice cast is. Graham McTavish and Richard Armitage, who play Dracula and Trevor Belmont respectively, deliver their lines with such impact and conviction that I don’t mind hearing them exposit their backstories and histories. Most of the season is dedicated to delving into Dracula’s state of mind and how he’s just tired of everything that happened with his wife’s murder and his desire for vengeance. We get the sense that Dracula feels no joy in what he’s doing, but his hatred is the only thing that’s keeping him going. I could listen to Graham McTavish explaining how lonely Dracula feels and how apathetic he is about his own war for days.

As for our heroes, we spend a fair amount of time just watching them travel together and see the chemistry between the three of them. All three of them gel together very well, especially when they’re just given time to sit around and talk to each other. Alucard and Trevor’s relationship in particular is pretty damn funny, with the two of them throwing insults at one another yet being forced to play nice just to get the job done. Sypha is usually the mediator between the two of them, but she’s just charismatic enough to hold her own with the two boys, despite how little screentime she has compared to the two of them.

As for the action, I wish that we had more than we got. When the action happens, it’s just as bloody as you would expect it to be. Heads get crushed, people get stabbed, hearts get pulled from still living bodies, monsters get burned alive, and Dracula lives up to his Tepes name with pride. Those fantastic moments are so few and far between though, with an entire episode going by without any major action set pieces. When they do appear, they’re usually brief and are too short to fully appreciate them. When you have an army of vampires laying waste to the countryside and drinking the blood of their victims for fun, you should spend more than a minute and a half showing off the massacre is all I’m saying.

The animation and art style hasn’t changed all that much from the first season, and that’s a good thing. I enjoyed a lot of the character designs and the new characters fit in right at home. The weirdest thing that I noticed as I watched the first six episodes was that all of the vampires have super long fingernails. Like, almost as long as their actual fingers. It’s an odd little detail, and I don’t know why it was so memorable to me, but it stuck out like a sore thumb to the point where I noticed it every time a vampire appeared onscreen.

If you were looking for more Castlevania references that pop up during the season, then season two has you covered. There were references to the original game, Symphony of the Night, Super Castlevania IV, and even Curse of Darkness that will leave fans quite pleased. I know that I definitely geeked out early on in the season when a group of famous monsters appeared to cause some havoc for our merry band of vampire hunters and even when a few characters popped up that fans may know.

The expanded episode count does do the series plenty of favors, allowing each episode to have its own time to breath and not feel like a rushed action movie, but there are a couple of moments of dead air between several characters, mostly Dracula’s generals. Several conversations between them just felt like they were repeated information that we already knew just so that each episode could pad out its runtime to 24 minutes. I’m all for more episodes to flesh out a story, but you need to do something with them to justify the added episodes. I was getting a lot of Preacher season 2 flashbacks where most of the season took place in one location with barely anything happening until the finale, which is unfortunately true here for both our heroes and villains.

Castlevania’s second season still carries over the same Gothic atmosphere and its ultra-violent anime roots, but it’s a different beast in nearly every other aspect. The action is played down for more exposition, and character motivations are given the spotlight. For characters like Dracula, that’s fine and dandy, but when it’s spent on uninteresting supporting characters, it just feels like a waste of my time. If all of this was in service of having more eyeball goring action in the finale and future seasons, then a slower-paced second season is fine by me as long as the results are as satisyfing as the first season’s.