Many indie studios love to be as weirdly obtuse as possible, and you won’t find a finer example than Ice-Pick Lodge. The studio’s last major title, The Void, was as vague as vague can get, and plenty strange to boot.

Ice-Pick is back with a game that’s perhaps even more bizarre than The Void. For all its mystical ramblings and unexplained gameplay rules, The Void never had ugly, bald, naked little midgets that you needed to attach to airplanes.

Cargo! – The Quest For Gravity has that. 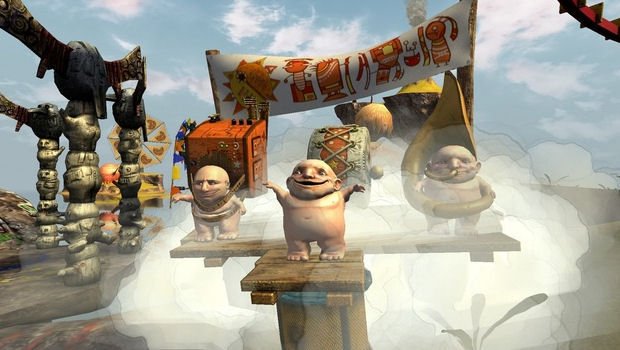 The best way of describing Cargo! is to say it’s a mixture of Lemmings and Banjo-Kazooie: Nuts & Bolts. Such a buzzy soundbite, however, does very little to truly get across what this game is really like.

You step into the steampunk boots of Flawkes, an engineer on a cargo blimp and seemingly one of the last two humans on Earth. You travel to a mysterious island populated by the aforementioned midgets, known locally as Buddies, who celebrate your arrival with fireworks. Unfortunately, the fireworks hit the blimp and you crash, because Buddies are not very clever.

Your delivery is ruined and you find yourself under the thumb of three mechanical Gods — all called Manipu — who are plotting to remake the planet in a similar fashion to the apocalyptic do-over found in the Old Testament. As you perform various tasks around the island, you find yourself in conflict with these Gods, gaining advice from another mechanical deity who bears more than a passing resemblance to Satan and makes no secret of his condescending distaste for the ruling class. 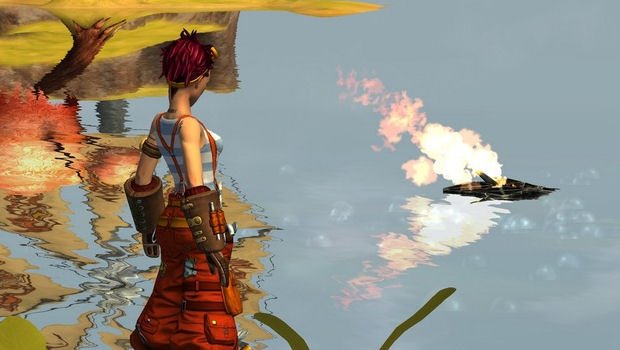 The game’s story is as bizarre as it gets, with unsubtle religious allegory contained in a narrative that’s more hinted at than explicitly stated. The Gods themselves are not the most explanatory of entities, and the Buddies prefer to deliver plot hints in the form of creepy, awkward little songs. Most of the dialog seems weird for the sheer sake of it, and you only really get an approximate idea of what’s going on.

The main conceit of the game is the ability to construct your own vehicles using a range of pre-set parts. Various blueprints are scattered throughout the area, allowing you to get a basic structure which can be added to in any way you see fit. Cars, boats, submarines, helicopters, planes and hot air balloons can all be created, and vehicle building is a fairly simple affair of sticking parts together like LEGO blocks. It’s easy to make a craft, although it’s equally easy to put parts in the wrong place, while the game refuses to tell you how to remove parts without scrapping the whole creation. Nevertheless, it can be cool to come up with a huge beast of a transport, and such things are crucial for the gathering of FUN.

FUN is the game’s currency, used to buy more vehicular parts, and it’s gathered by giving the Buddies a good time in the most adrenaline-pumping ways possible. For example, kicking Buddies up the arse sends them flying into the air and instantly transfers FUN to your account. Earning the big money, however, is achieved by attaching a life ring to your vehicle. Buddies will grab onto it and form a midget-chain which will trail behind your craft as you drive it around, showering you with FUN until you stop or they literally explode from excitement (don’t worry, they come back to life by bursting out of a magical volcano). 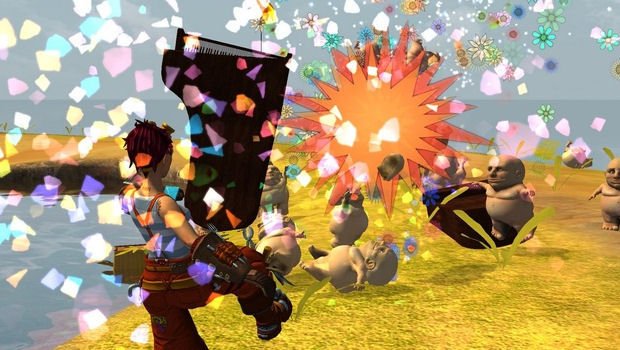 Of course, you can always collect magical musical notes and use them to draw the Buddies toward a kick-ass dance party. That not only earns FUN, but has the side-effect of giving you one of the most disturbing displays of your life, as a dozen Verne Troyer lookalikes dance nakedly around a shimmering cleft while pianos fall from the sky. Seriously.

FUN can be spent on the Stratosphere as well as vehicle parts. The Stratosphere is where pieces of the Earth have been scattered since the Gods’ chicanery, and you can spend FUN on restoring gravity to them and bringing them back to the planet. Some of the objects grant you extra Buddies, while others will affect the game’s story. It’s best to just bring them all down whenever new ones appear and see what happens. Every now then, a new objective opens up.

Cargo! is split into four seasons, with each season having a major task that needs to be completed. Here is where the game’s weird charms don’t always work in its favor. The varied tasks are often given to you by the Gods or the Captain (the only other human left), and neither party is fond of giving you your objectives in a straight, helpful way. Guesswork seems to be the way forward for much of the game, and your goals get less scrutable as things proceed. There’s something to be said for experimentation, but there’s less to be said for wandering aimlessly around a large area, without a map, wondering where the Hell you’re expected to go. 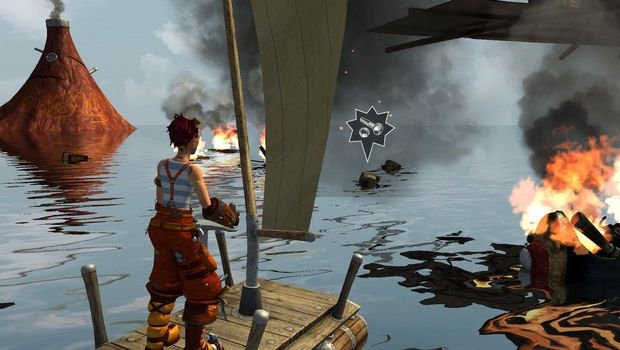 When Ice-Pick Lodge does deign to give you more of a clue, the gameplay can be strangely compelling. One major issue is making sure you keep Buddies alive (hence the Lemmings part). Whether you’re crashing cars into giant penguins to stop them sitting on your little bald resources or building a roof on a glacier to save a group of them from getting crushed, there are moments of genuine panic as you attempt to stop the pint-sized idiots from getting themselves slaughtered. Flawkes herself cannot die, but it feels like a total failure whenever you let even a single Buddy fall foul of peril.

You’ll also be undertaking some truly unique tasks, such as playing a rhythm game in order to get Buddies to bounce on a drum to make a volcano work, or sending the Statue of Liberty into a frozen sea in order to liberate Buddies from flying ice flows. The concepts are never pedestrian, to say the least, and the game’s almost worth playing just to experience some of the most extraordinary situations found within a game.

That said, however, the gameplay constantly leaves me with the belief that Cargo! could have been so much more than it is. The game’s campaign is a scant four to five hours at the most generous estimate, and that’s only if you want to horde FUN and bring down everything from the Stratosphere. Despite the game’s idiosyncratic objectives, the actual amount of variety in the gameplay is disappointingly low. Once you’ve attached twenty buddies to an airplane and spun around the world, your only choice for gathering FUN is doing it again, perhaps with a slightly bigger plane. Your interactions with the world are incredibly limited, and outside of gathering FUN in a handful of shallow ways, you’re given a sandbox in which you can’t really do anything. 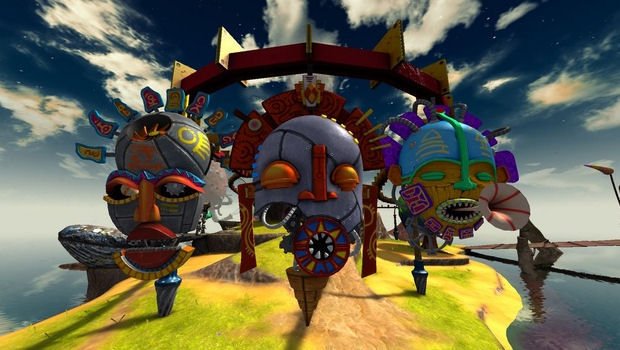 Speaking of which, there is a sandbox mode, which gives you all the gameplay with none of the objectives, but again, the noticeable lack of things to do brings significant harm to the overall charm. I’m reminded, in a way, of Noby Noby Boy. That’s another game in which you’re dropped into a thoroughly absorbing, bizarre world, but held back with so little ability to interact with it that you can’t help wondering what the point is, and why the non-player characters seem to be having more fun than the player.

There’s enjoyment to be had in tinkering with vehicles, making bigger crafts that can house more Buddies and reap more FUN per passenger, but again, once you’ve constructed a FUN-sucking juggernaut, your left with one option — driving around the island, tediously, and watching your coffers fill.

It’s a shame, because there is a genuine heart to Cargo!. It’s got a strange sense of humor, with religious satire injected into a surreal and charming world. The graphics and art direction are pretty damn good, with a colorful, cartoony environment and characters that you just won’t find anywhere else. Of particular note is the game’s superb soundtrack, with a range of excellent musical scores that are worth listening to outside of the game. 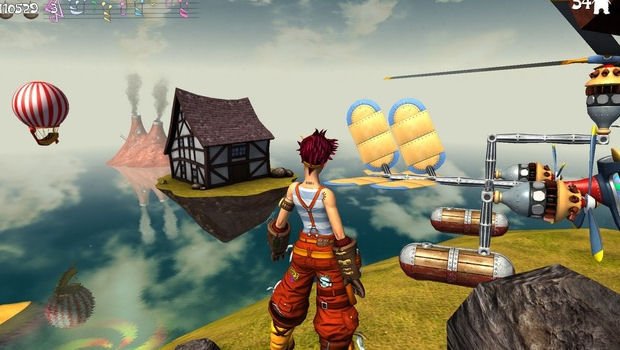 Cargo! – The Quest For Gravity is, at its core, a rather good little game, but it’s a game held back by its own compulsion to be ambiguous, not to mention the staggering lack of things to do outside of its enigmatic objectives and vehicle building. I believe Cargo! is a game that everybody should play at least once, but at $19.99, I feel the price is a bit steep for the content on offer. If the price ever drops, then this is an instant must-have title. At its current price, only true connoisseurs of the demented will feel completely fulfilled by this compelling, fun, but ultimately shallow experience.